Tim: We arrived in Chile with only 14 days to reach Santiago in time to meet up with my parents. Our original plan was to bus the entire Northern portion of the country. Our friend Jess was also traveling in South America and was currently in Bolivia not to far from us. If we were able to stay a few more days in Northern Chile we would be able to meet up with Jess and her friend Tammy in San Pedro de Atacama, the most popular tourist attraction in Northern Chile. This meant that we would not have sufficient time to bus so we would need to fly.

We were able to use some of our free mileage to catch a flight from nearby Calama to Santiago saving us some 21 hours of bus rides. Yeah!

Looking for a deal I found a good rate on a rental car for our 5 day stay in San Pedro de Atacama. First we had to bus from Iquique to Calama, then take a taxi to the airport so we could pick up our rental car then drive 1 1/2 hours to San Pedro. I paid for the cheapest smallest rental car that was available, but on arrival we were upgraded to a midsize 4 door, 4x4, diesel Nissan pickup truck. We were happy for the upgrade. It took a few minutes to get use to driving again as I had not drive in almost two months since leaving the US. 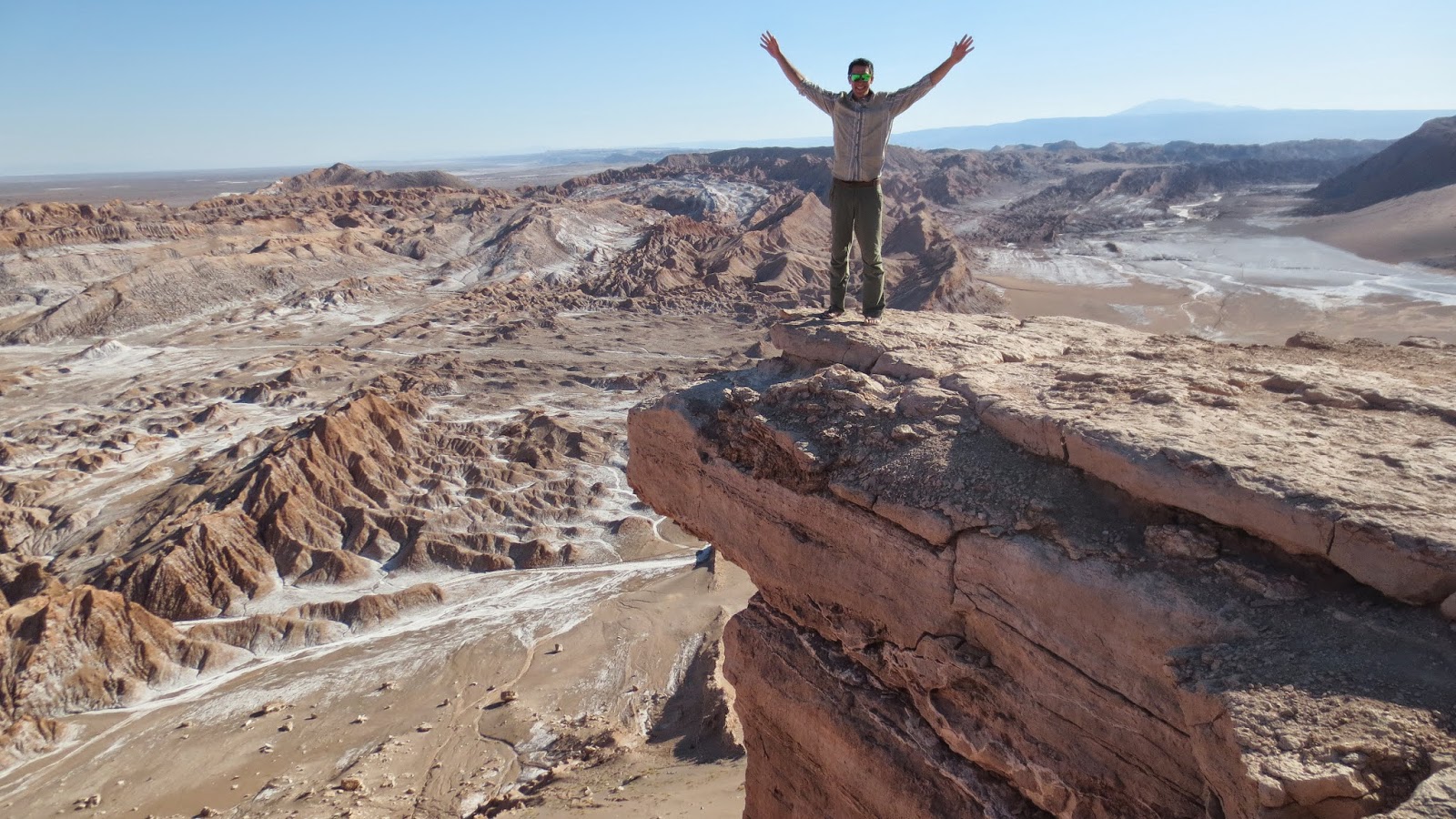 We had two days in San Pedro de Atacama before our friend Jess arrived. Our first day we visited some ancient petraglyphs and what was called the rainbow valley. The valley was so named because of the different colors of the rocks because of different salt concentrations. The area is absolutely a desert. It was very very dry with cool weather in the morning turning to blazing hot by mid afternoon. 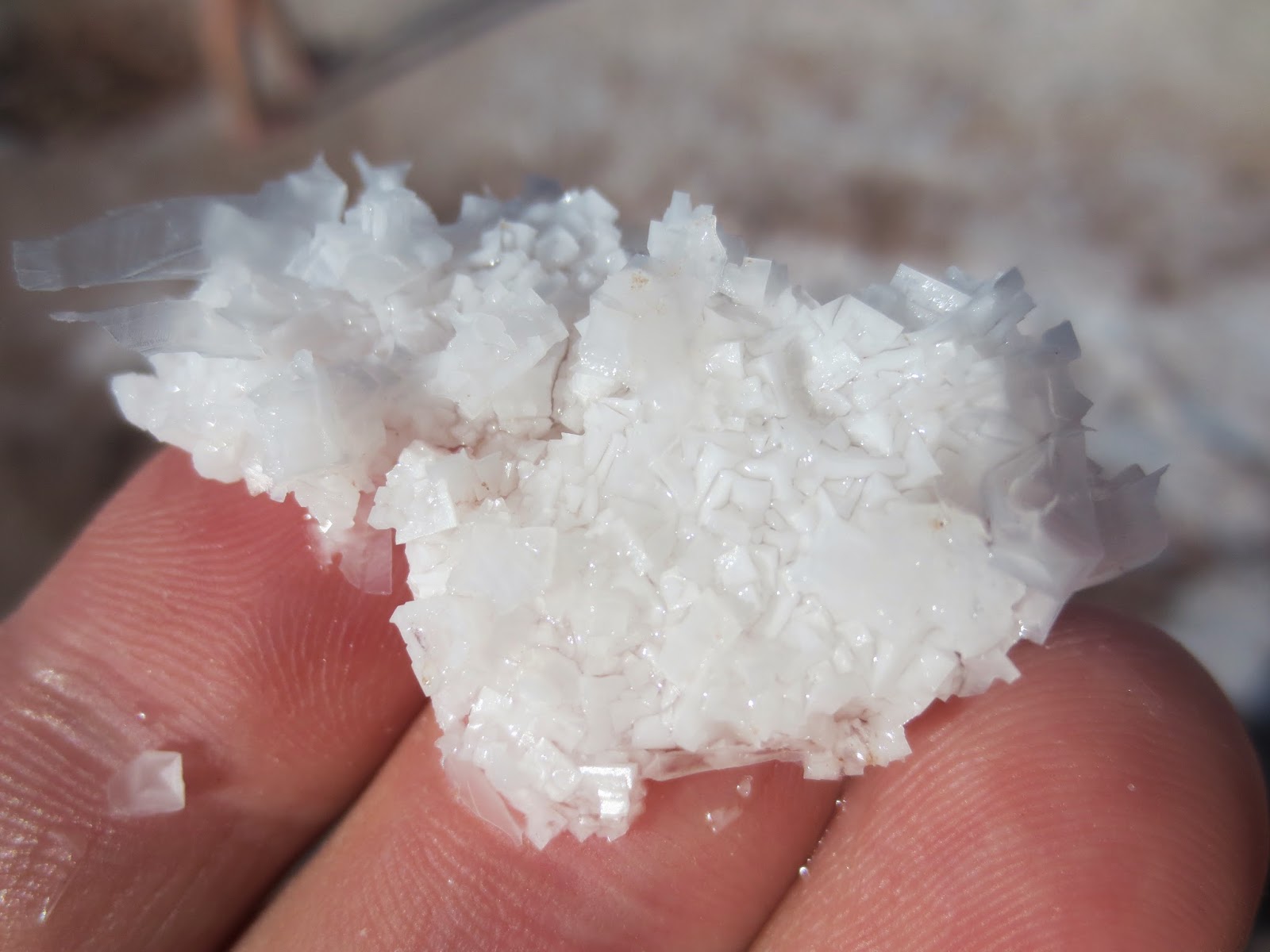 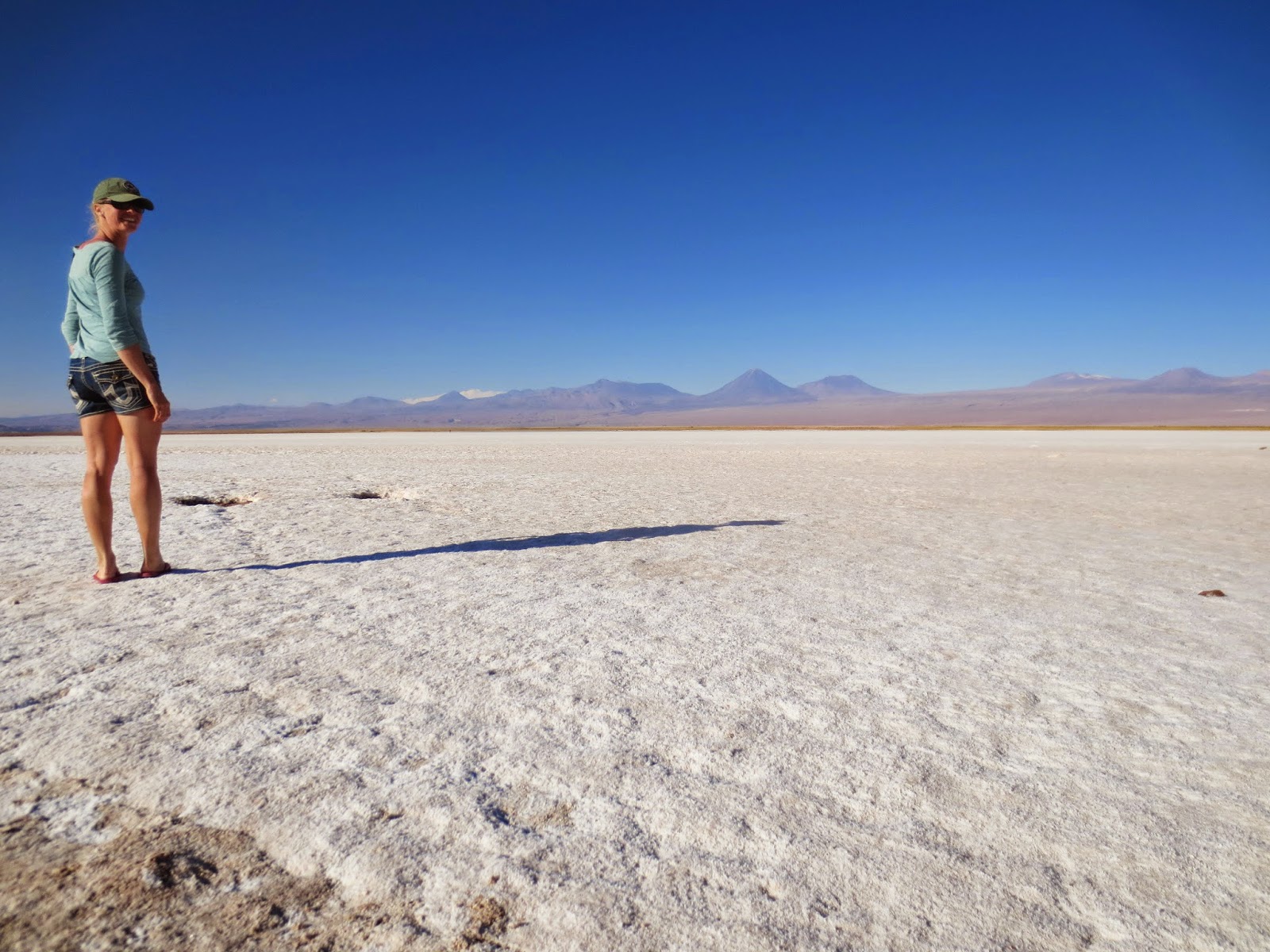 It turned out to be a good thing we got upgraded to the 4x4 truck. Many of the side roads we traveled on were in ill repair and very bumpy.

On our second day we lounged around our guesthouse till late afternoon in hopes the temperatures would cool off. We jumped in the truck and headed for Laguna Cejar.  This small lake more like a pond is located just 15 kilometers from town following a dirt road into the middle of the salt flats of San Pedro de Atacama. We arrived at the pool and paid the $2.50 USD entrance fee. The pool is one of the only lakes that you are allowed to swim in. The lake just 70 meters across is similar in salinity to the Dead Sea. This makes it impossible to drown.

I usually sink in swimming pools, but the water was so salty that I could cross my arms and legs and the top of my shoulders and head would still be completely out of the water. It was actually difficult to swim with your belly down and you could not use your legs to kick because doing so would force your head into the water. You do not want to put your head into the water because the water is too salty.
The water was quite cold and after 15 minutes in the water you need to get out and warm yourself in the sun. Once you dry in the sun it is as few you covered yourself in table salt and you can bruss off layers of dried salt from your skin. 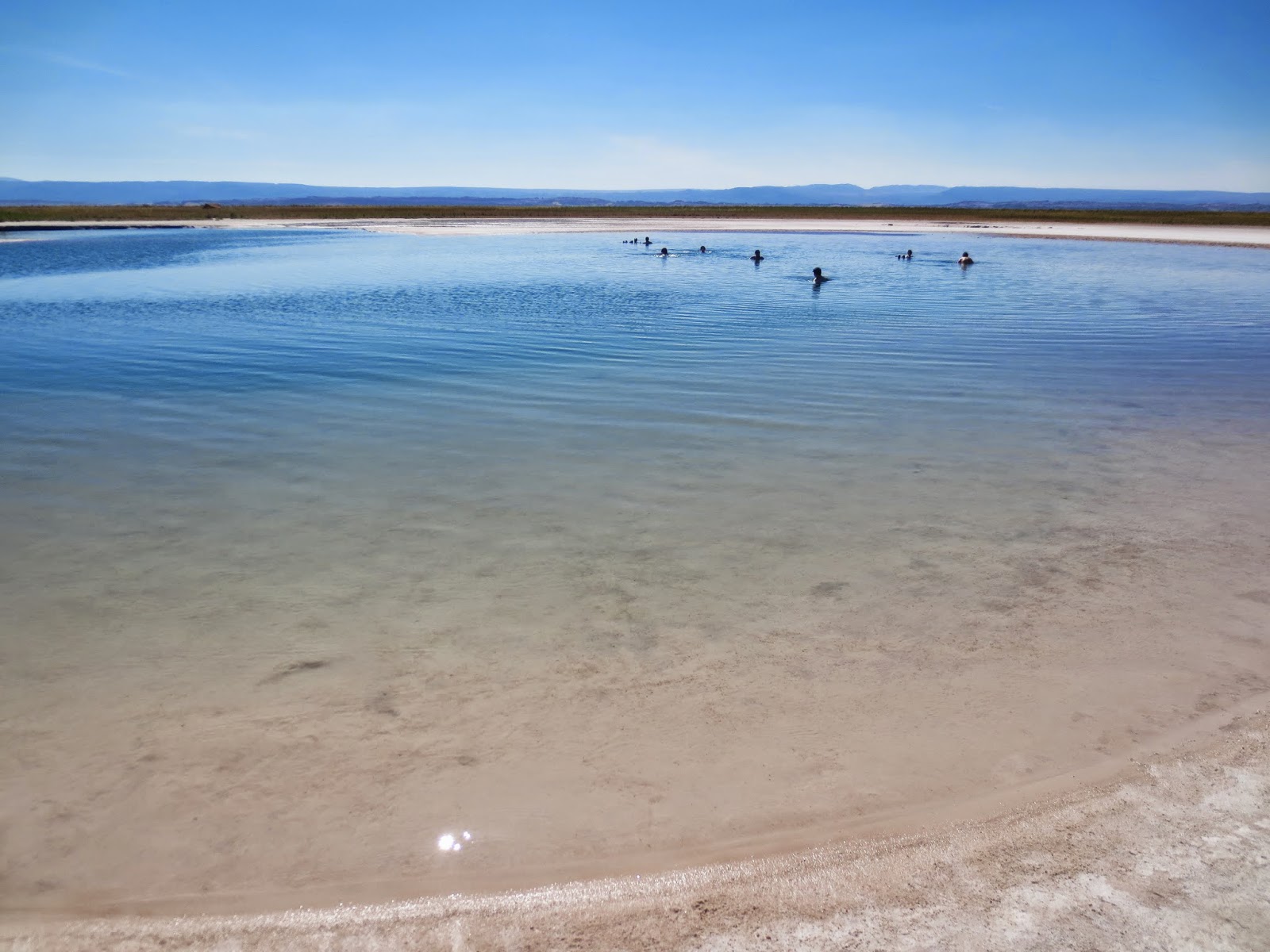 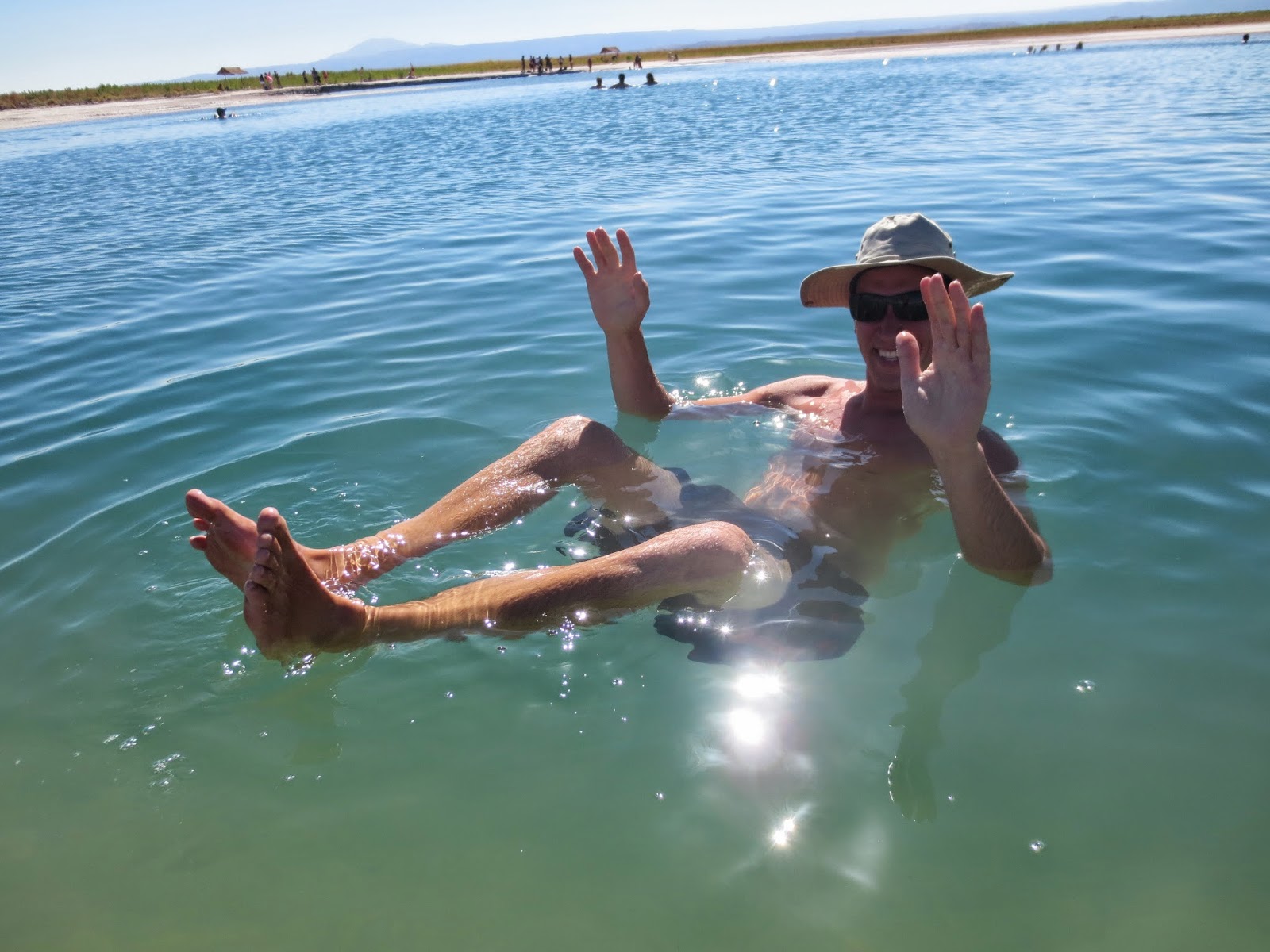 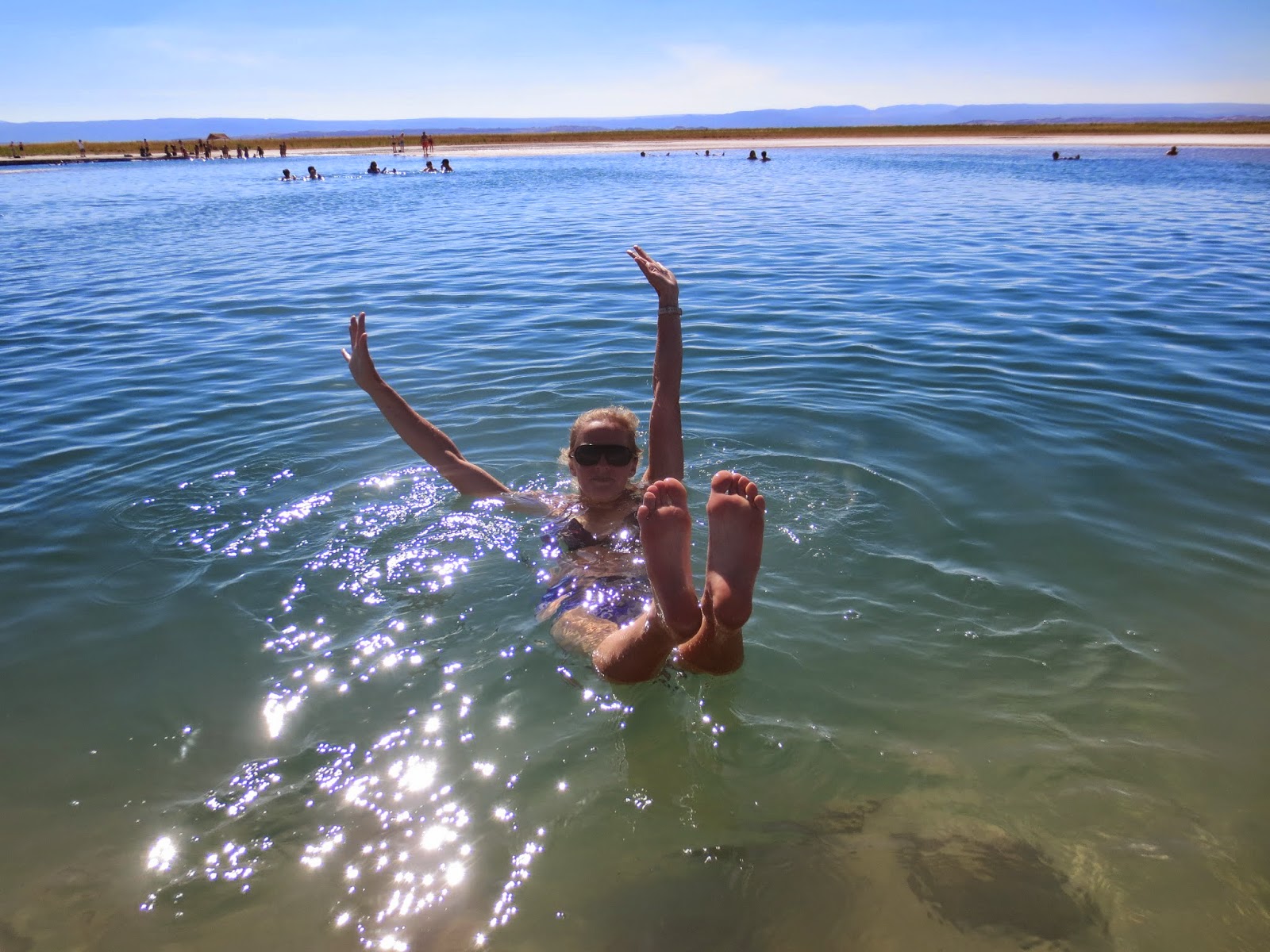 The next afternoon Jess and Tammy arrived after a long day of busing from the Uni Salt Flats of Bolivia. The chose a hostel down the street from our place. We had planned a trip to the Valle de Luna for the afternoon. The Valle de Luna is the biggest attraction in the area. It is a desolate landscape that is compared to the surface of the moon. NASA even tested out moon rovers here. We got a little lost trying to navigate into the valley. The scenery was very beautiful. 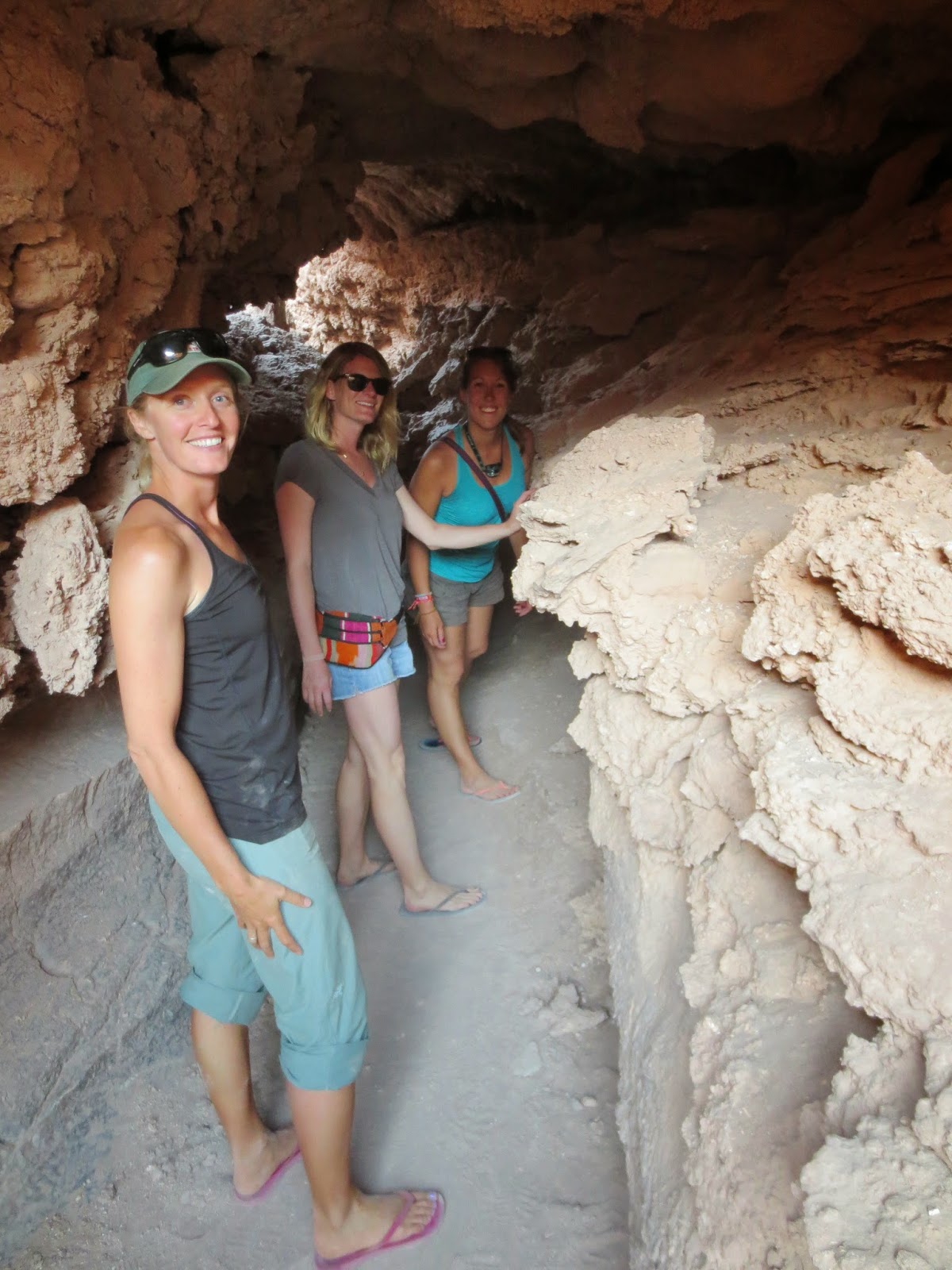 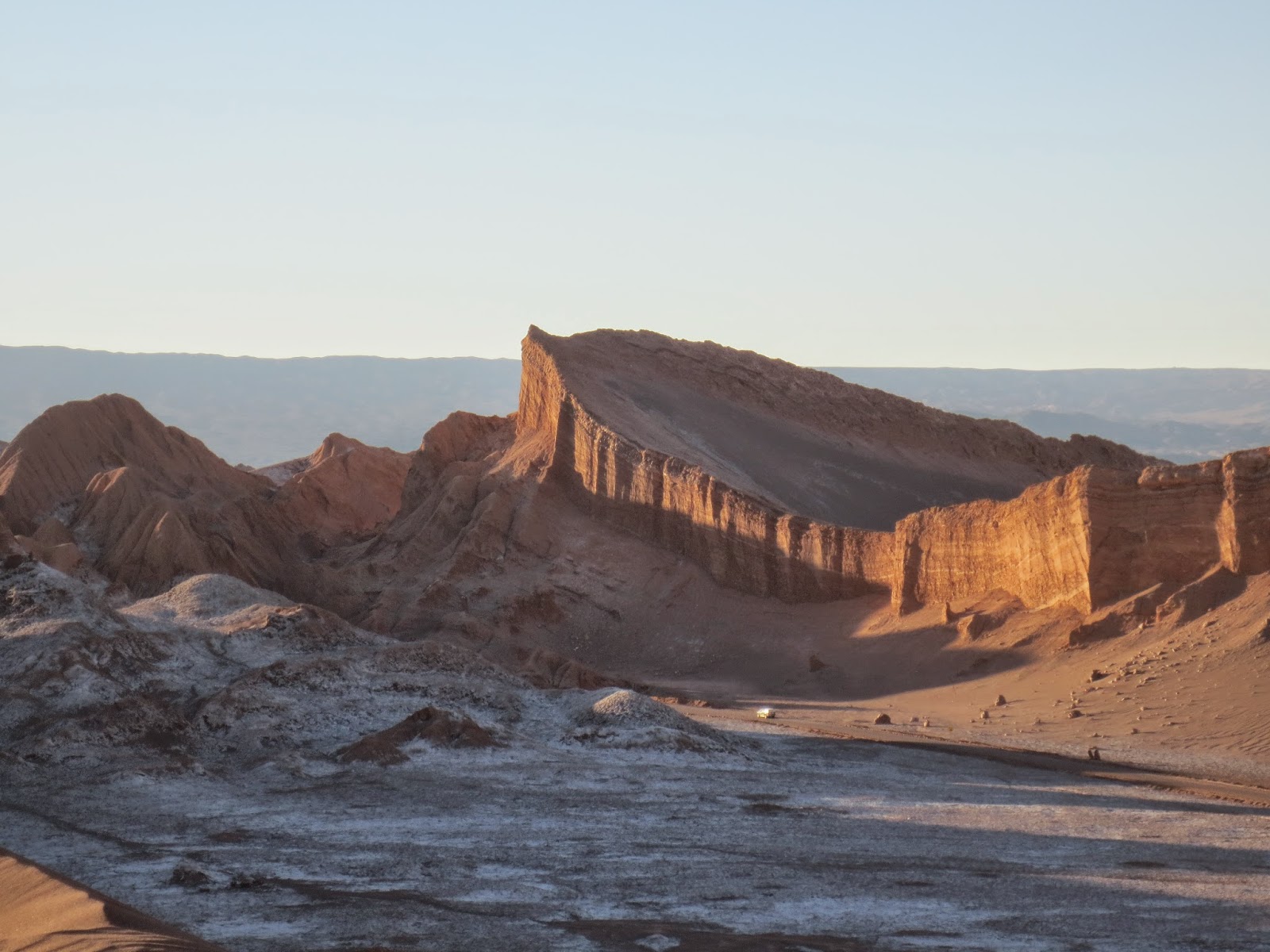 Amber: San Pedro de Atacama was so pretty!  And so unlike anything I've ever seen.  I kept telling Tim that if anyone wanted to make a really convincing movie on how I imagined Hell, this would be the place.  Hot and dry and you will die if you some how get stranded.  From it being so hot and dry. 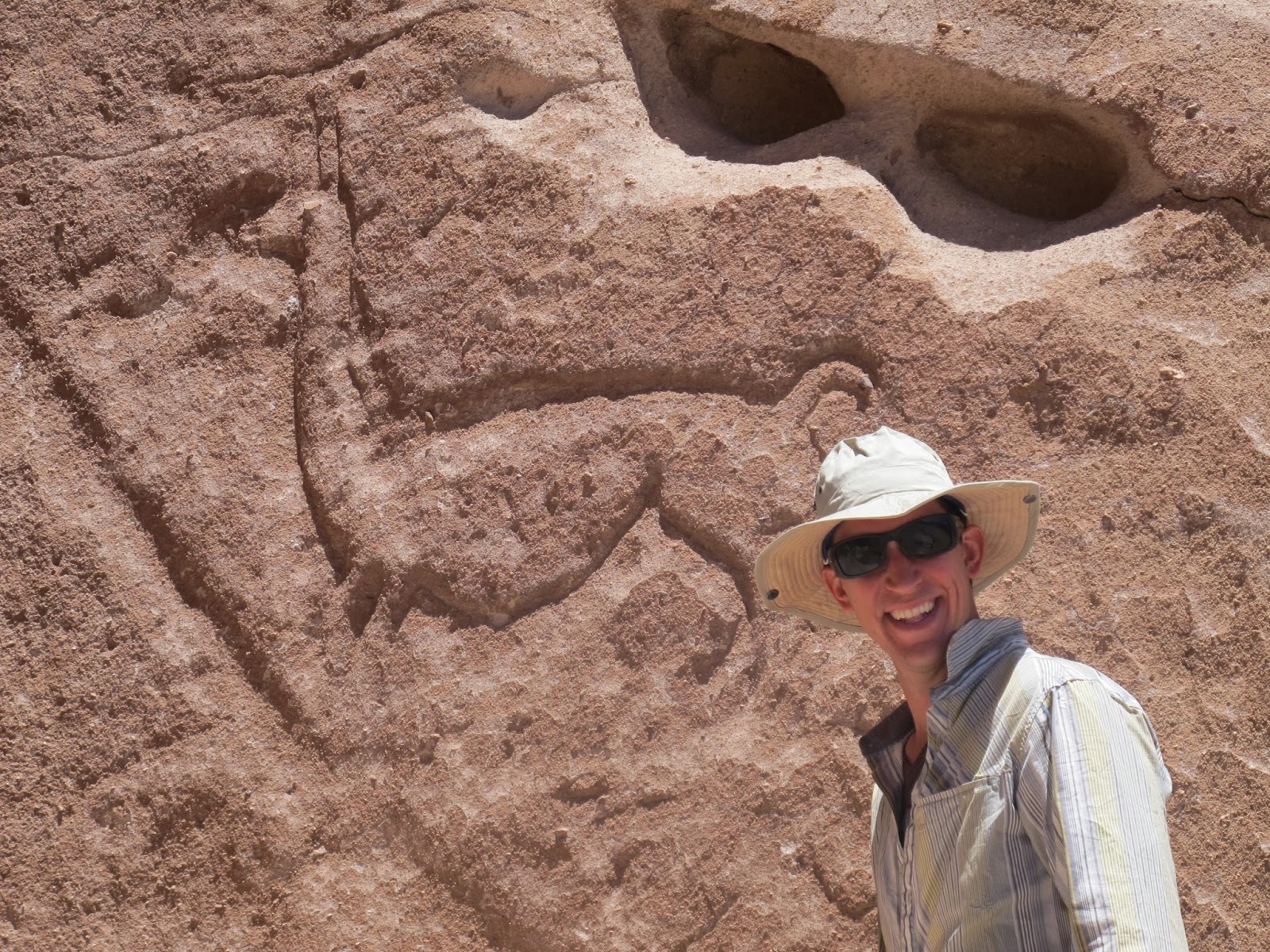 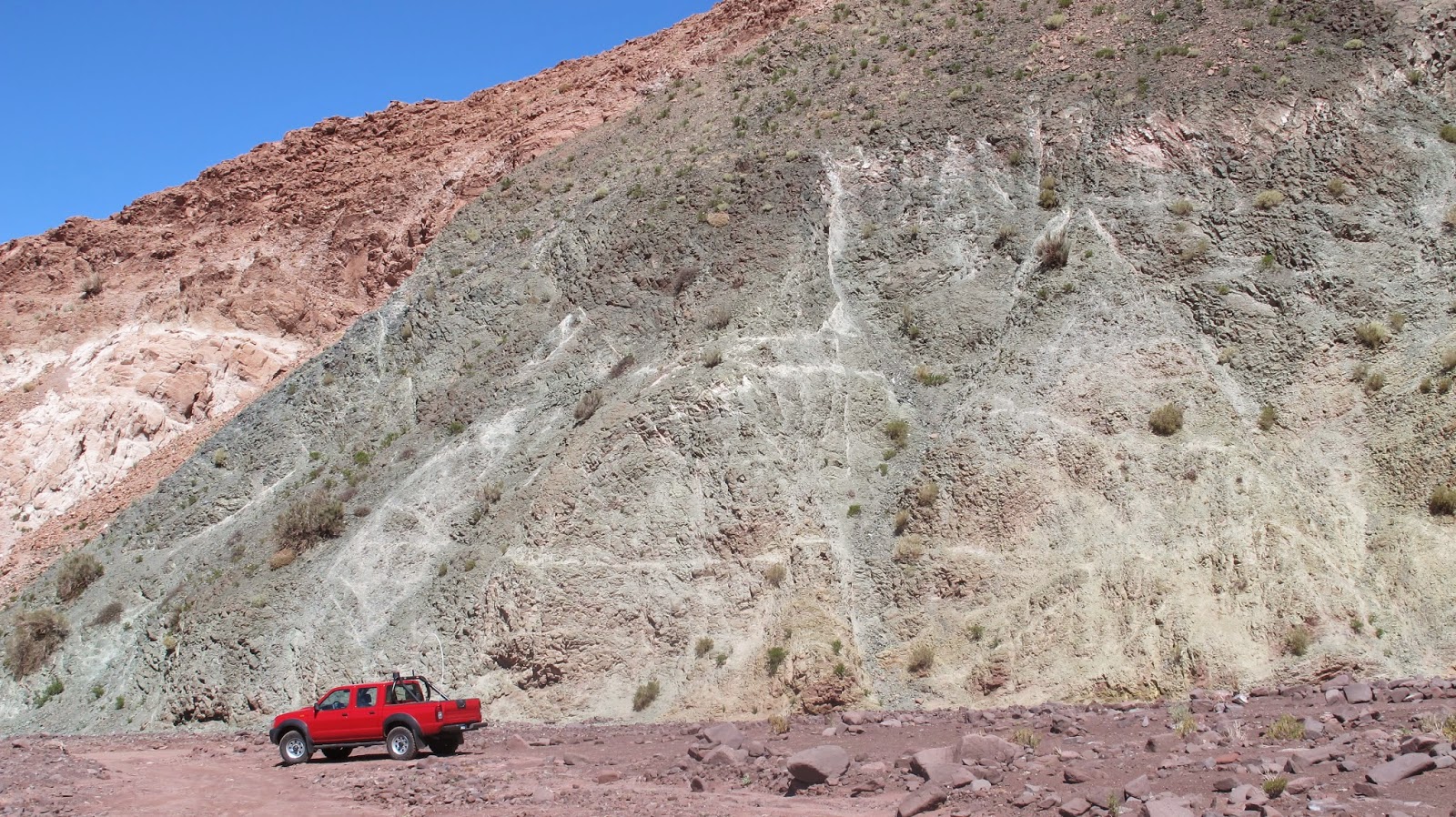 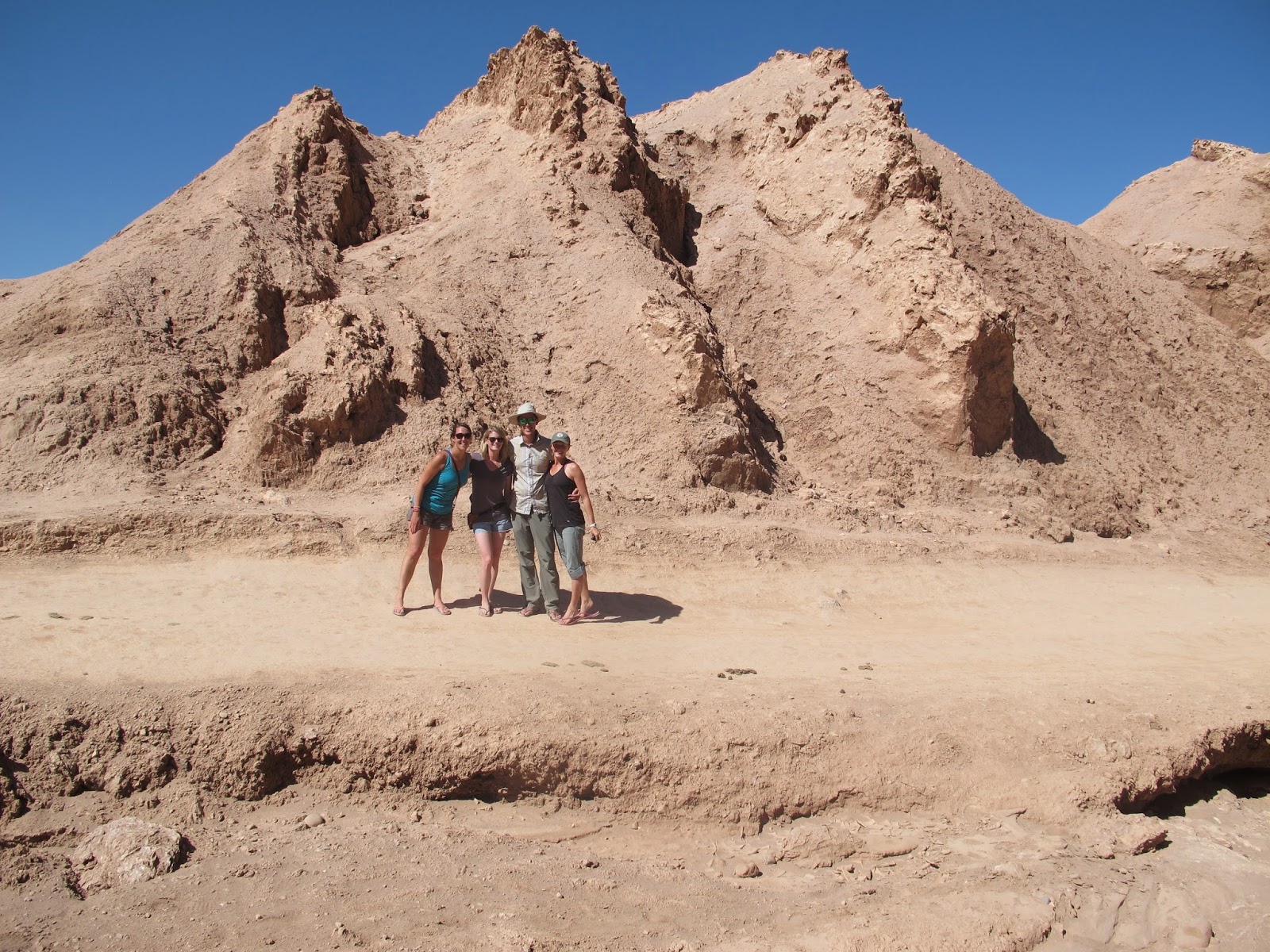 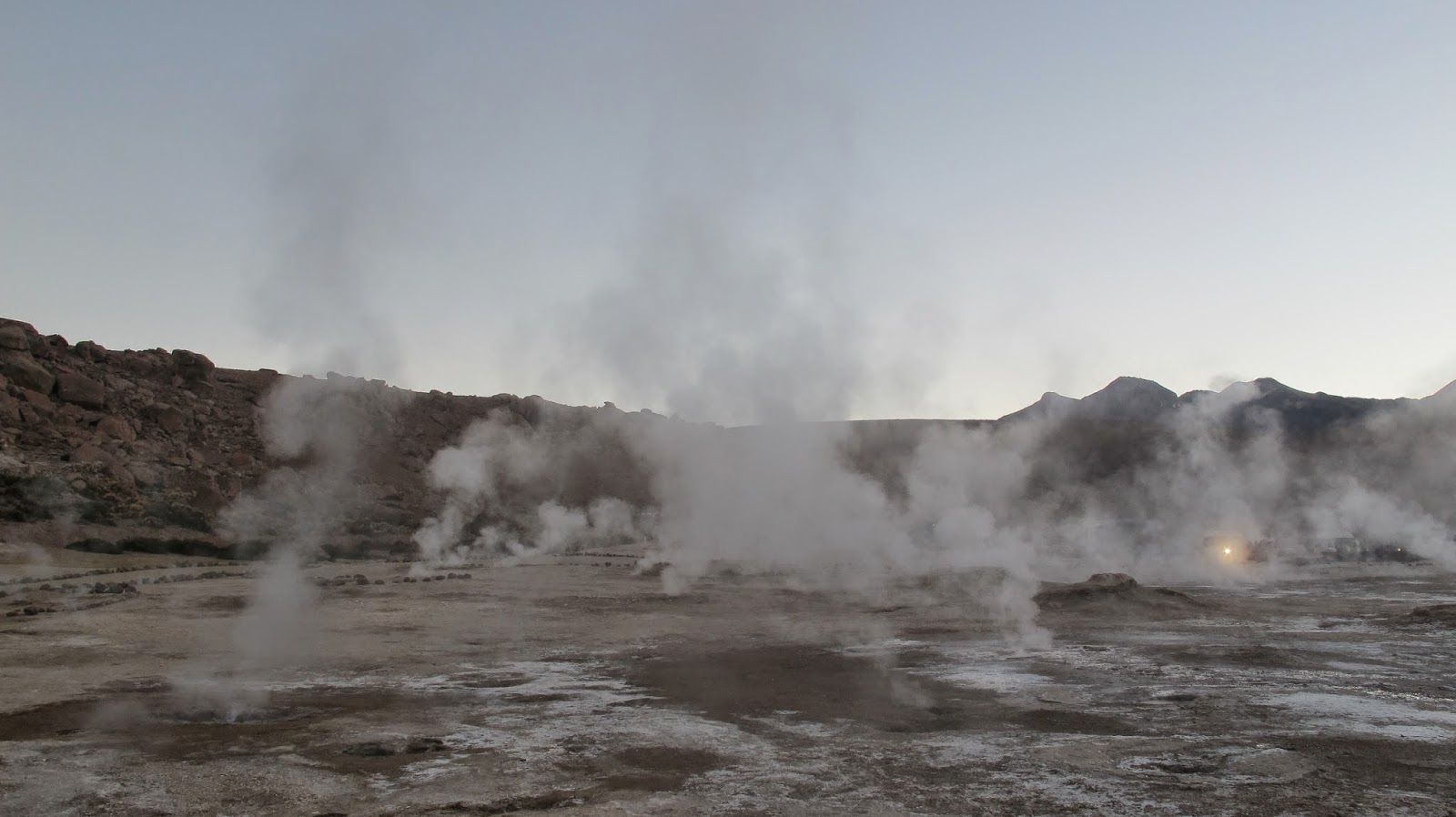 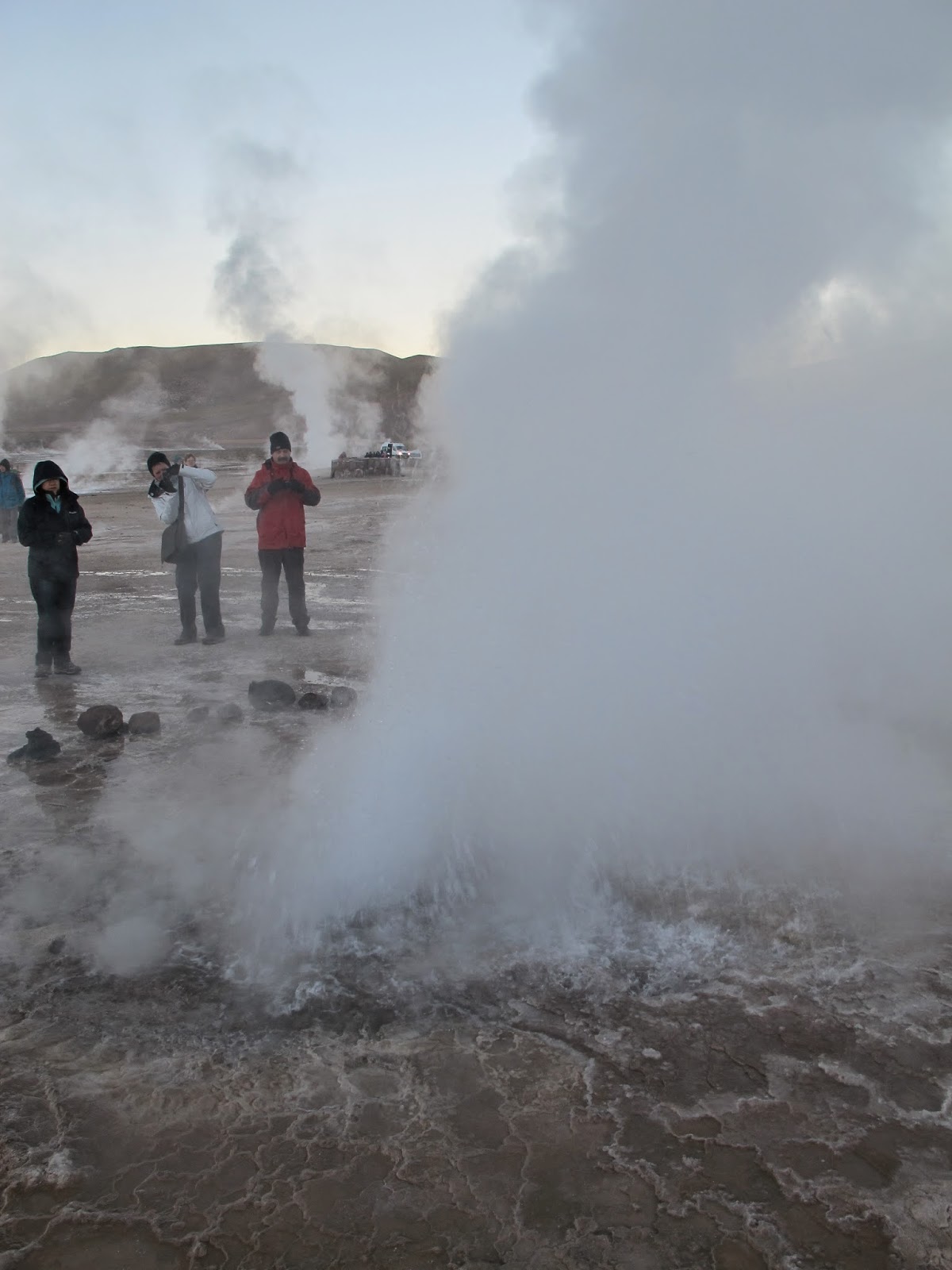 We had a great time exploring the desert.  We walked on salt flats, saw ancient petroglifs, crazy green, pink, black and crystallized-brown-mud mountains, floated in a salt pool, hiked through crazy salt tunnels, got up at four am to see geysers that have the highest elevation in the world, and boiled beans for over ten hours.  As it turns out, for beans, you never ever add salt to them until they are done cooking.  We learned this the hard way, and went hungry for most of two meals and made our hostel host hate us for the amount of gas we burned boiling them trying get them to soften up.  Lesson learned!  LOL. 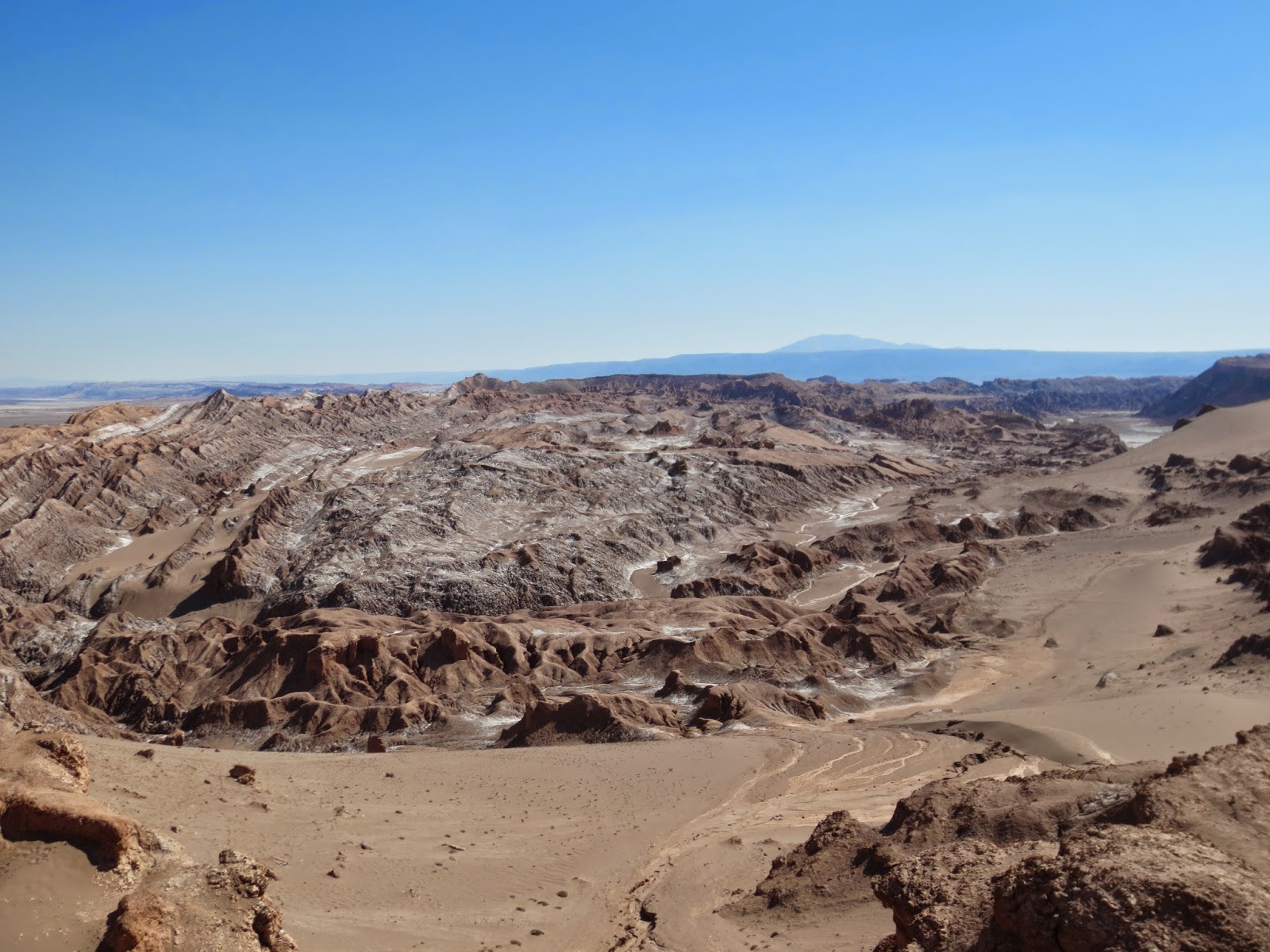