Amber:  The trip from Sengiggi Beach, Lombok, to Neusa Dua, Bali, cost Tim and I $15.00 each.  As we took this cheap option, as opposed to the far more expensive $45 for the fast boat, we had a lovely boat ride on the local car ferry.  We took three different mini bus shuttles to get to the ferry port from Sengiggi Beach.  My bag at one point was strapped to the top of the van by a piece of string, which tied around the entire top of the car through the vehicles open passenger windows.  Despite the shuttle from Senggigi to the ferry, we arrived early. We boarded the big, rusty boat that had a very strong smell of diesel fuel. We went in search of seating on the upper passenger deck.  The boat looked very crowded as far as available deck space, so when we were offered a crew crew room for $5.00, we accepted.  It was a hot day, but inside the tiny room was hotter.  I could tell it was going to be a long ride.  We had been quoted four to six hours.  Love how precise things can be in Indonesia! 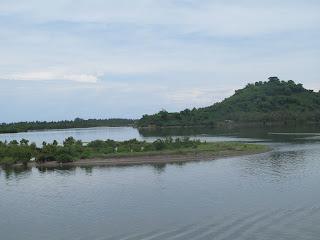 After the long bus shuttle, I needed to use the restroom.  It had to have been over 100' in the bathroom.  The three stalls were occupied.  For a long time.  When one finally became available, I was drenched in sweat.  And the restrooms were squatter style.  Perfect.  I could just imagine how wonderful it was going to be while we crossed the sea in the rolling swell.  I returned to the room to find Tim sprawled out on the floor on a tiny mattress, catching as much air as he could from the weakly spinning fan.  We finally were underway at about twelve thirty.  We went out to scope out the landscape as it slowly went by, but returned to our room quickly as there was no lock for our door.  A woman was crouched outside in the hallway.  Tim later went to the restroom and found a pile of vomit where she had been crouched. 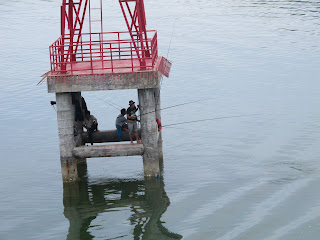 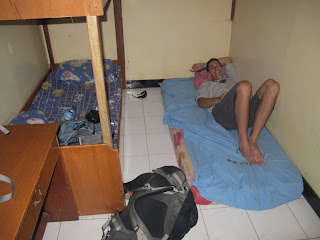 We arrived at Padang Bai, Bali in just under four hours.  We didn't get to the dock, however, until almost six hours as there seemed to be more ferry's in a que to unload than there was dock space.  So, our boat just sat in idle for two hours waiting its turn.  None of the locals seemed the least bit concerned.  It appears this is fairly common.  Once it was our turn, we unloaded and were herded to our shuttle into Kuta.  Once we arrived, it was dark and sprinkling.  As the cab ride to Nusa Dua was about eight dollars, one way, Tim and I decided we should just rent a motor scooter for our whole time in Nusa Dua, giving us more freedom.  After dinner at a little back alley restaurant, we booked a scooter for $4.50 a day.  We shoved my bag in front of Tim on the bike, and loaded his bag up with our two small back packs (holding our computers, cameras, etc), tightened that onto me, and we were off.  Me clinging to Tim.

Bali is so relaxing!  We enjoyed our pool, the beach and riding our motor scooter into Kuta.  One day we drove to Tanah Lot, a beautiful Buddhist temple on the West cost of Bali.  It was a beautiful, hot sunny day and it was fun to wade through the surf to the little island temple. 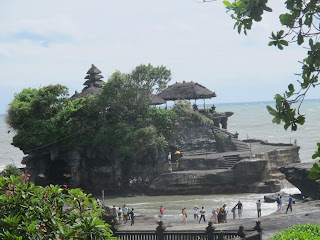 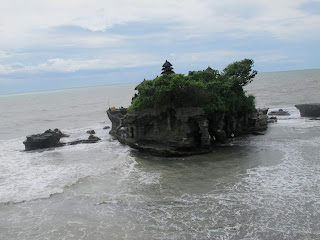 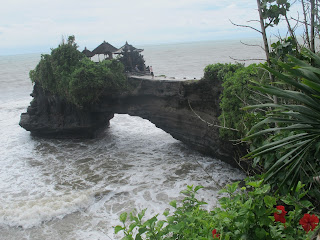 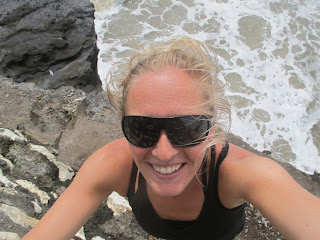 We finally got to try some muscat coffee on one of our last days on Indonesia.  It was tasty, but neither of us would say it was the best coffee we had ever tasted.  There was a little coffee stand, complete with three muscats, at the temple, and it was going for $2.50 a glass.  We heard that it went for over $20 a cup, so were happy to have the 'discounted' price.  Probably was also the 'discounted' coffee, not 100% muscat digested, but it was a fun little place and now we've had poop coffee. 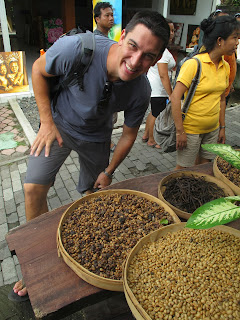 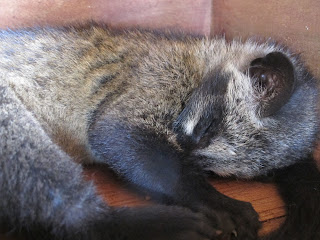 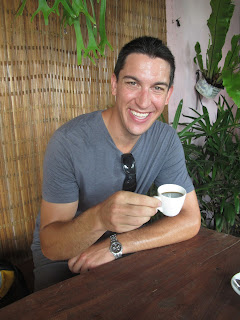