Amber:  We joined Gunther, the seedy owner of our guest house, a young, rather unkempt  Russian woman (that he hit on constantly, to no avail), and a few of his local employees on the local boat from Gili T over to Lombok.  The boat was long and narrow and very full.  As we boarded, Gunther suggested we sit on the bow.It was a bit windy, so there was some chop, but the sun was shining and it looked better up there than in the hot, stuffy, cramped cabin.  The boat ride was nice, we followed the three Gili's in to shore, getting only a little wet from the spray.  The Russian woman sprawled out up on the cabin roof and I was afraid she would roll off the top, but she managed to stay put.  As it turns out, she had been on Gili T for seven months on a previous trip, and had just returned and had been there for a month more with no definite plans for leaving.  From what we could tell, that had been eight months of doing drugs, sitting on her porch, and watching movies.  It seemed a little like a waste of eight months.
We arrived at the Senggigi Beach Sheraton after accepting a ride from Gunther and co, for a small fee.  It ended up costing us $7 for the both of us to get from Gili T to our hotel, not a bad price!  The Sheraton was one of the original 5 star hotels in Senggigi Beach, so, while it was nice, it was a little more run down than some of our other 5 star hotels we've stayed at so far.  I think we will have stayed 22 free nights at 5 star hotels, this trip alone, all thanks to Tim's credit card point scheming.  It was still pretty darn posh, and did have a beautiful pool that was a stones throw away from the ocean.  No complaints.
One of our friends, Rico, has spent a lot of time in Indonesia.  His friend, Reny, met up with us with her (new) boyfriend for some drinks and sushi at Happy Bar, the local hot spot for live music.  It was a fun little restaurant, the cover band was good, and the sushi was enjoyable.  We actually went back a second night and ate the sushi again.  It was fun to hear stories about Rico from Reny.
Our stay at Senggigi Beach was very mellow.  We enjoyed our pool and beach time, listened to Pimsleur Spanish, worked out every morning at the gym, and went for a walk through the small beach town.  We rented a motor scooter to visit a water fall.  Air Terjun Tiu Pupas was about an hour away by motor scooter.  We rented the bike for $5.00 and headed north.  We had to pull over on the side of the road to apply sun screen as the haze had burned off and the sun was really hot.  We are just south of the Equator, after all.   We got some great views of the Gili's as we drove along the coast.  It was fun to be back on a bike.  We only rented one to save on gas money and on the actual rental.  So, we saved at least seven dollars!  Aside from two small mud slides that we had to slow down to maneuver over, the roads are very nice on Lombok.  They wind up and over hills, giving great views of the beaches and palm tree covered valleys. 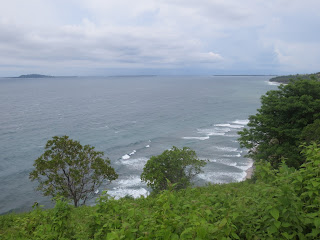 We were lead/herded by a bunch of local children up to the waterfall.  They were really cute, about six to eight years old, but it was just a short walk through the jungle, so their 'assistance' wasn't needed.  They had branched off from a much larger group of children that were following four Western tourists when we arrived, and chattered around us as we made our way up the valley.  The waterfall was pretty, but a little muddy.  It is about 30 m high, and runs only in the wet season.  It was nice and cool in the valley.  When we were done taking a few photos, we were approached by a man, telling us we needed to sign a guest book and pay a donation.  Pretty certain it padded the insides of his pocket, Tim gave him the equivalent of a dollar and we returned to our scooter.  The kids followed us back to where the bike was parked, and the demands of "give me money" started.  Tim asked them "why should I give you money?"  He finally gave them a small bill, about .20, and we were on our way. 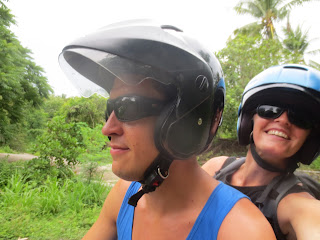 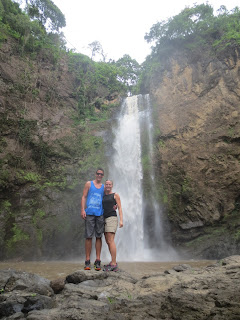 As Tim and I had been in Indonesia for almost a month, we decided it was time for a little spa love.  We walked into Sengiggi Beach and found a place that did haircuts for $3 and pedicures for about $4.50.  What a steel!  And they had two lady's available, so we were good to go.  As my feet got scrubbed on, I noticed Tim's face had gone stoic.  He wasn't talking.  He finally said something when his hair dresser spun him around to inspect his haircut.  A large amount of Tim's black hair was in a pile around his chair.  His head, however, looked like something had gone terribly wrong.  He tried to point at places that she had missed.  He had a huge chunk missing right in front, but then his sides were really long, and she had tried combing the longer pieces over the missing chunk.  It looked awful!  He told her she had to do more.  I did my best not to laugh.  I failed miserably.  Finally, he gave up and told her she had to stop.  It was just getting worse.  We payed for a not so great pedicure, and an even worse haircut and marched home.  I tried to help cut Tim's hair, but his Mom was a hairdresser at one point, so he is used to professional assistance when it comes to hair cuts.  Even at home!  He took over, and after another hour, his hair looked... acceptable. But 100 times better than what she had done. 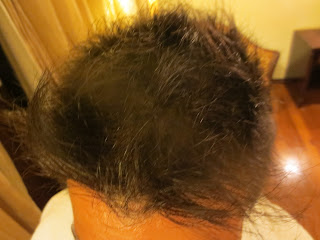