Tim:  After our rather unpleasant travel experience across Java, we were ready for relaxation and beach time. We took a fast boat from the island of Bali to the very small island of Gili Trawanagan off the coast of Lombok. Gili T as it is called is one of three very small islands in close proximity to eachother. Gili T is the largest of the three islands and has the most tourist infrastructure. The boat journey took about two hours, and smelled of diesel fuel inside the enclosed cabin. 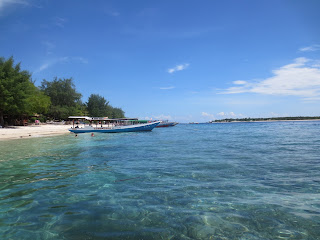 We had booked a place to stay in Gili T because we had heard rumors that the island is totally booked approaching New Year's eve. We arrived to find that the place that we had book for 37 USD per night was full and they had not honored the online reservation. We were not too disappointed as we had already been offered rooms at a much cheaper price. After 45 minutes of walking around in the heat, we settled on a newly constructed bungalow away from the beach for 20 USD per night with an outdoor bathroom and breakfast included.

Our first full day in Gili T we booked a snorkeling tour. It only cost 11 USD per person for the boat which made visited four different sights and included lunch. The first snorkeling spot we saw a medium sized sea turtle and many beautiful fish and coral. The snorkeling and diving in Gili T is amazing. We enjoyed a full day of snorkeling and liked it so much that we booked another snorkeling tour with the same company later on during our stay. We saw many more sea turtles, a shark, a giant puffer fish, smaller puffer fish, a lion fish, and a host of other tropical fish. 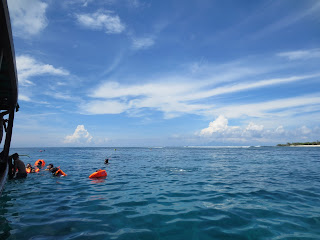 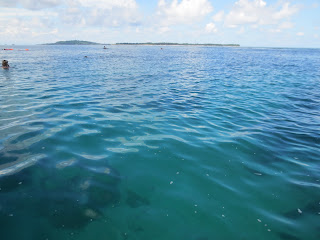 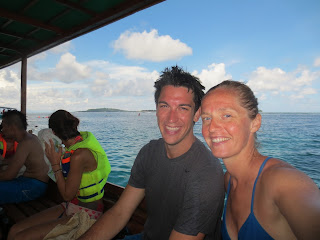 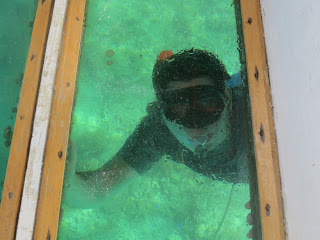 We went for a walk around the entire island. It took us about two hours following the beach most of the way. We also went for a couple of jogs as well. The jog took about 45 minutes. The eastern side of the island is the most populated with most of the hotels and restaurants. The other sides of the island have a few hotels scattered around. 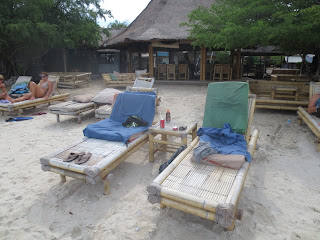 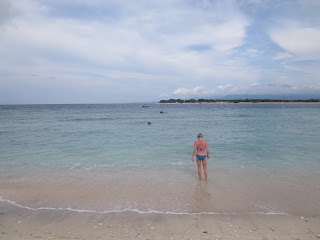 Towards the Northwest end of the island, there is a good surfing spot. We went and watched the mostly local crowd catch the waves.

On our third day we signed up for a single dive. The price for diving is fixed on the island between all of the dive companies. 37 USD per dive. The weather was quite windy when we went out. The boat driver did not want to drive out to the sight we were scheduled to visit, but after the other two divers on our boat insisted, we ventured out further to Shark Point. Shark Point is the most popular dive sight of the Gili Islands. Obviously, because you have the best chance of spotting reef sharks.

We had to back roll off of the side of the boat. Most of the local boats have outriggers to help with stability in rough weather. The outriggers were only six feet or so from the side of the boat. In the rough weather getting hit in the head by the outrigger once you popped up after the initial back roll into the water was a serious concern. We managed to all enter the water safely. There were a total of five of us that dove at Shark Point: two Australians, our Swedish dive leader, and the two of us.

We had an awesome dive. There was a possibility that the current was going to be very strong. It turned out to be very nice. The current pulled us along slowly and we did not really even need to kick to move along. We saw three sharks, more sea turtles than I can remember to count, giant groupers, sea snakes, puffer fish, and swarms of other beautiful fish.