Amber:  We left the peace and quiet of Railay Beach and took a boat over Koh Phi Phi.  There are actually two islands that go by Koh Phi Phi.  Koh Phi Phi Don is inhabited, while its beautiful neighbor is famous for "The Beach" being filmed on its ever so popular Maya Bay, Koh Phi Phi Leh.  We got off the ferry and were bombarded by people trying to get us to stay at their guest house.  There were ample accommodations on Koh Phi Phi!  Everyone was advertising 800 baht, about $24, for their most basic of housing.  There are a lot of pricey resorts on Koh Phi Phi, and while they were amazing looking, they were well above our budget at 3,600 baht.  We had just payed 400 baht in Tonsai, so were a little sticker shocked with the jump in price.  We finally booked a ocean view bungalow at 800 baht and were marched from the pier, through the small town, and to the other side of the island.  The white sand bay we were led to was beautiful!  The little, rickety bungalow, however, was not.  Tim almost broke through the porch as he went in.  A mattress sat on the floor and a mosquito net hung limply from the ceiling.  We were not impressed. 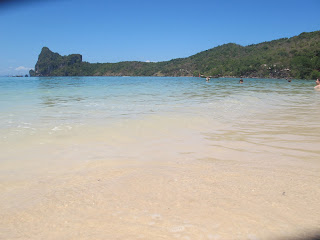 We finally found a much nicer room a few hundred yards away from the beach.  Tim was able to barter the owner down to 700 baht a night, and we were happy.  Koh Phi Phi has such a fun party scene.  The bars literally have their dance floor on the beach.  So when the tide comes in, you are dancing in the ocean.  It was fun.  We had a few beers and walked along the beach that was lined with bars.  Each bar had an amazing sound system, so while vacationers jumped flaming jump ropes, played flaming limbo, and jumped through flaming loops, others danced in the surf.  Tim and I mostly watched the crowd and laughed at all the drunken shenaganigans.

We were almost at the end of our five and a half month long trip, so splurged and booked a $150 for three dives, diving trip.  We were so excited!  The diving in Koh Phi Phi was supposed to be amazing.  The first dive sight we went to was a wreck dive.  We took a small boat away from the island for about an hour and a half.  When we got to our dive sight, we were in pretty sharp, 3' swell.  Rocking side to side as the captain had us broadside to the waves, I started to worry about getting sick under water.  Uh oh!  The current was strong, so we were instructed to jump off the stern, then swim towards the bow and take the anchor line down.  The current was very strong!  I was out of breath by the time I made i to the bow line.  Knowing it would be calmer under water, our dive leader told us to go down.  We clung to the anchor line as the visibility was incredibly poor and the current was so strong.  We finally made it to the wreck.  The visibility and the current did not improve.  Tim and I constantly bumped into each other as we were afraid to get too far away from one another and get lost.  The boat had been on the ocean floor for 15 years, so we had been warned to not touch it as it could collapse.  Sea urchins lined the boat's deck. I was terrified!  I burned through my air quickly (I'm pretty sure I was in panic mode the whole dive), and was happy to go back to the surface.  I was shaking when we got out of the water.  Being 90' below the surface, unable to see and constantly being knocked into an old, rotten boat, was not my favorite.

We waited an hour and were told we would be going back down in the same area.  I had been secretly hoping that they would realize that it was far too rough and therefor move.  No such luck.  We dropped in right next to a big rock pinnacle that jetted out of the water.  The rock pile that the boat we had previously dove had wrecked on.  The sea was noticeably calmer, and the water bright turquoise.  We were under maybe a minute when we saw a sea snake.  Clown fish, box fish and puffer fish were everywhere!  Our guide almost bumped into a leopard shark before she spotted him, quietly laying on the sea floor.  Seven feet long, he didn't seem to have a care in the world as we swam by!  The current was pretty much gone, and the visibility was amazing. It was one of my favorite dives.  We finally had to come up, and were settling onto the upper deck for some sun when we realized our boat was driving away with still two divers left in the water.  I ran down and told our dive leader.  She didn't believe me!!  Finally, I was able to convince the captain to turn around and rescue the stranded divers.  How horrible!

Our last dive of the day we drove back to Koh Phi Phi Leh.  The boat backed up to the huge cliff wall that rose up out of the sea.  The visibility was again amazing.  Swimming along the cliff face and viewing it from under water was beautiful.  We saw nudibranches and sea turtles.  It was such a pretty, peaceful dive!  A perfect last dive for our trip.

We enjoyed laying out in the sun pretty much every day we were on Koh Phi Phi.  We layered on the SPF30 and would last about an hour or two.  The bay was shallow, so we would either be on the white sand beach or wade out into the ocean.  It was heaven!  I didn't want to leave. 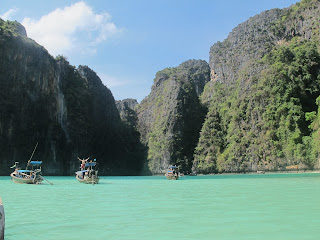 We took a snorkeling long boat tour of Koh Phi Phi Leh and even beached on Maya Beach.  The islands are truly spectacular.  The water and sand are just breath taking.  We love Thailand!! 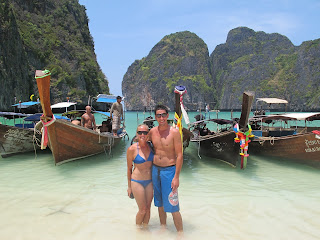