Amber:  Reilay Beach has been on the top of my list of places to visit in all of SE Asia since we began planning our trip in 2011.  The tall limestone cliffs that jet out of turquoise water, surrounding picture perfect white sand beaches, are breath taking.  The rock climbing in the area is supposed to be spectacular.  On one of his previous visits to Thailand, Tim had visited for a few days and had raved about how amazing it was.   I knew I wanted to go!  Last year, with our six country sprint of SE Asia for four months, we accomplished visiting Thailand, Laos, Vietnam, Cambodia, Malaysia, and Singapore.  While we did pass through Thailand three times, we didn't make it far enough south in Thailand to visit Reilay Beach.  This time around, it was on our we-will-go list. 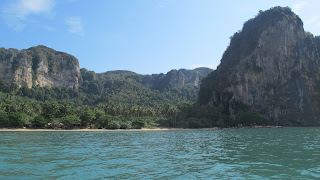 We said goodbye to Justin and Ciara, after six weeks of traveling with them, on Koh Tao.  They were heading north to Bangkok to meet up with our friend Rico, before flying back to the States.   Tim and I got a ferry, bus, long tail ticket to Reilay beach.  The boat ride was extremely crowded leaving Koh Tao.  The number of foreigners surging to and from the little island was amazing.  The ferry unloaded just as many people as it picked up, at least 500 passengers, and they aren't the only means to get to the island. And this is daily!  Their economy must be booming. At our boat to bus transfer, the wind picked up. Tim and I were sitting in the small bus station when a huge rain and wind storm hit.  A large group of Chinese tourists were trying to board a bus, and their luggage went flying in the gusts.  Women were screaming as they ran through the sheets of rain to get into the bus.  Our bus arrived finally, and we ran through the rain to get onboard.  A huge strike of lightening hit a tower right next to us.  We were already safely on board, so laughed at a black dog that started running for cover.  The poor dog ran down the road our bus was taking for a long, long time! 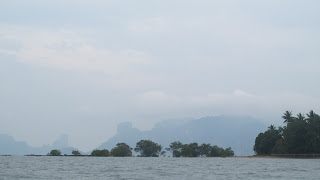 We ended up spending a night in Krabi Town, and got up early to take a long tail boat out to Reilay.  The long tails only go when they dem they have enough passengers.  The two of us was not enough!  Finally, four more people had signed up, so we were ready to go.  It took us about an hour on the long tail to get to Reilay beach.  It was raining when we arrived.  The limestone karsts were beautiful!  One of the passengers got excited about a particularly pretty photo opportunity and shifted to the far side of the long tail.  We were in a three foot swell from the stern, and the weight shift caused the long, narrow vessel to start to plunge to the left dramatically.  Tim jumped to the other side of the boat, balancing it again.  The boat driver slowed the engine and yelled at the eager photographer; "easy man!"  A flipped long tail would have been an interesting way to arrive in Reilay! 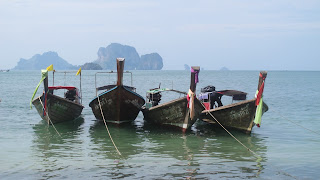 We made it to Reilay, safe and sound.  The white sand beach and limestone cliffs were just as beautiful as I imagined them to be. Tim's class was at ten am, so we trekked through the rain in search of lodging before giving up and finding Tim a computer lab.  Leaving our bags with Tim, I decided to hike over to Tonsai, the hippy climber town on the beach next to Reilay.  Reilay was pricy! The lodging options appeared to be really expensive resorts.  That were beautiful, but well over our price range. So, along the beach, over the rocks and through the jungle I went to Tonsai.  I found the small trail that wound over the cliff that separated the two beaches with out much difficulty.  It took me about twenty minutes before I reached the other beach.  Rock climbers were strung up all over the cliff faces.  How fun!  It made me wish I had some form of muscle in my arms so I could shimmy up the cliffs, too! 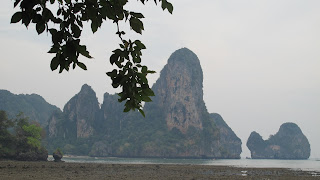 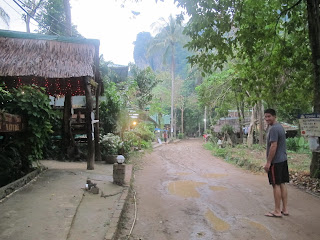 The town of Tonsai was not the most impressive first impression.  I walked along the beach, but there were only a few bars, so took a muddy trail up into the jungle.  I price checked four different options before returning to Reilay.  No one was full, so I wasn't worried about booking a place.  They were all pretty rough, little shacks with mosquito nets.  I felt like a spoiled princess when I went back to Tim, telling him I didn't like Tonsai.  It was dirty and the lodging was expensive for what you got.  Tim laughed at me, and we hiked back to Tonsai and booked a little bungalow.  It was nothing special, but it did have a tin roof, so when it rained, it sounded really cool.  And the bamboo walls, though not particularly sturdy, kept the monkeys out.  The mosquito net did a pretty good job keeping the bugs out, too! 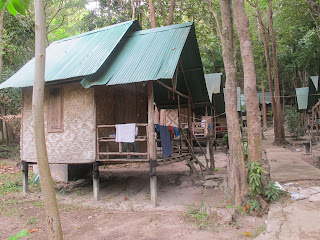 We did make the mistake of buying banana bread and bringing it back to our room with us, not one night, but two!  The first night, I had left the banana bread in Tim's back pack and left it on the floor of our bungalow, not thinking we were in the middle of the jungle.  A little animal ate a big hole through Tim's back pack and ate a large chunk of our bread.  Not learning our lesson, we bought an even bigger loaf of banana bread and brought it into our room again, this time, protected high up on a shelf in its plastic case.  Tim and I fell asleep, thinking we had outsmarted our little menace.  Oh no!  This time, the little monster climbed into our shack and kept us up all night, trying to get into our bread.  We were stubborn and refused to put the banana bread outside.  With a head lamp, we defended our banana bread!  One teny little mouse was doing his best to get to his prize.  We were successful in keeping him from eating our banana bread, but the next morning, we sleepily asked ourselves if a half a loaf of banana bread was worth a whole nights rest. 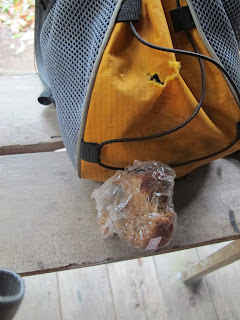 Tonsai and Reilay turned out to be as fun and as beautiful as I had imagined them to be.  Tim and I rented a kayak two different days.  Kayaking around all the near by little islands was fun, and Tim likes to paddle trough all the gauntlets and caves as much as I do!  The tide rises and falls rapidly, so it was always different.  We beached at a little secluded white sand cove and looked for sea shells.  We found these amazing little snails and collected a plastic coke bottle full of them.  We promised each other we will make a cool project out of them.  We spent two different days collecting them, so we better! 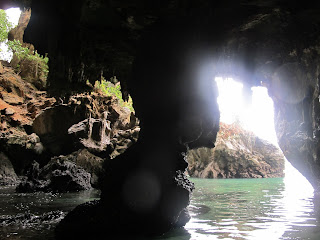 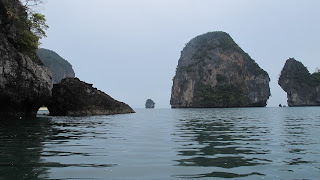 Renting climbing gear is extremely expensive, and both Tim and I are pretty darn weak right now, so we never did go climbing.  Food and drinks are definitely island prices, so pricy, but we did walk down to the beach and enjoy the surf and stars, sipping on a beer or Sangsom and coke.  Sipping on a drink by moonlight, beach side, is hard to beat!  One night at dusk, we heard a woman scream.  Everyone moved out to the beach and stared at the 500' cliff that looms over the bars of Tonsai Beach.  We walked out and joined the crowd.  What were they looking at?  Finally we saw; a man on the top of the cliff jumped off!  He free fell for about a second, then pulled his shoot and floated to the beach.  A second man waited a few minutes, and then also jumped off the cliff.  It was amazing watching his tiny body arch off the cliff and then with a woosh, pull his shoot.  As it turns out, the first scream we heard was a woman that lead the base jumpers.  Awesome! 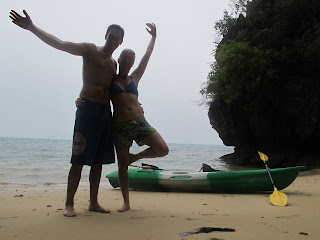