Flying over the Nazca Lines, Peru

Amber:  Tim and I were both excited to fly over the Nazca lines.  No one really knows why or how exactly they were made.  Obviously, the sun baked rocks were removed piled to the side, hence exposing darker rocks beneath. But there are numerous speculations as to how the images are so proportionate (and large).  Some images are over 200 m long. Some suggest aliens.  Others, a prehistoric hot air balloon.  The lines are in the middle of an extremely hot, dry desert.  The currently most popular belief is that they were used to worship sun and rain gods.  They date from pre-Christ to just before the Inca rule.  Either way, they are really cool. 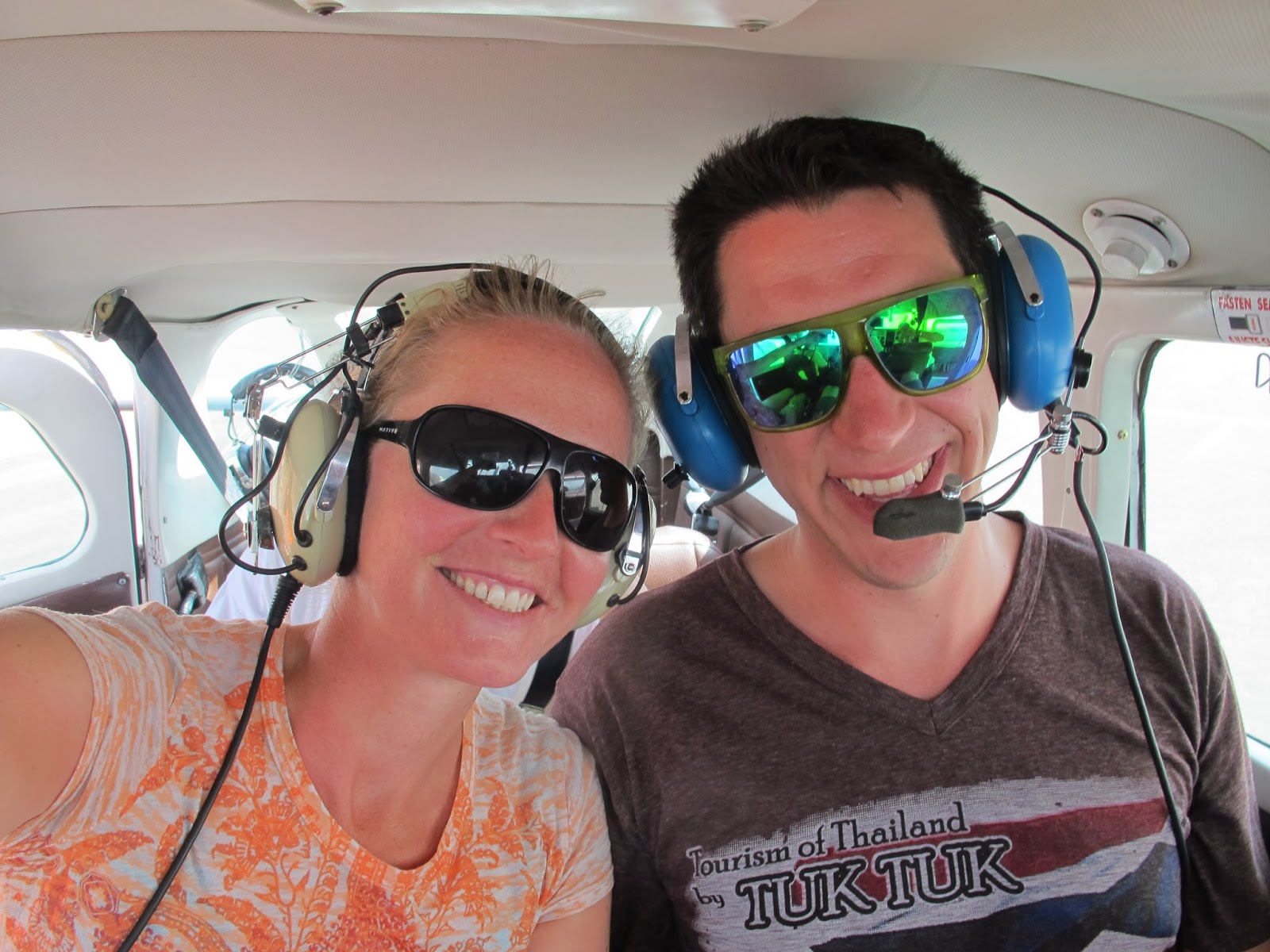 We had booked a thirty minute flight over the lines for two in the afternoon.  It was a hot, windy day.  I was a little nervous as my sister had flown over the Nazca lines a few weeks prior and had gotten extremely ill while doing all the spins over the figures.  There were about 13 distinct Nazca figures we would be viewing.  First we would circle on the right side of the plane, and then again, on the left to ensure everyone saw and had an opportunity for a photo.  So a minimum of 26 turns in 30 minutes.  I made sure I found my little doggie bag in the seat pocket in front of me, just in case. 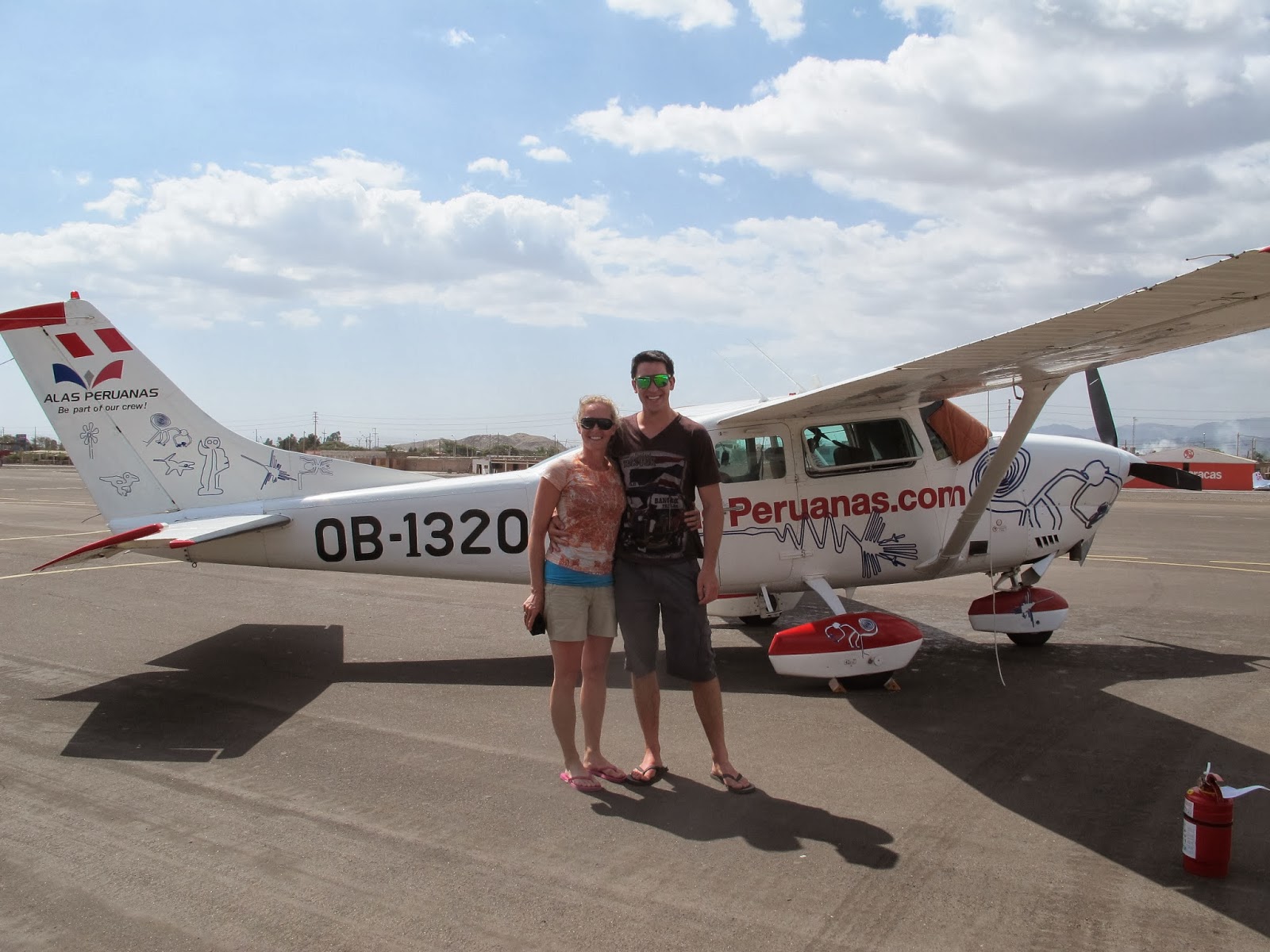 We were in a 206, so a small, single engine plane both Tim and I have had lots of experience flying in back home in Alaska.  Due to several plane crashes in the past, Nazca now mandates that each flight has two pilots.  We had a young man as our primary pilot, and the second was a young Peruvian woman.  She discussed the images while the man circled them. 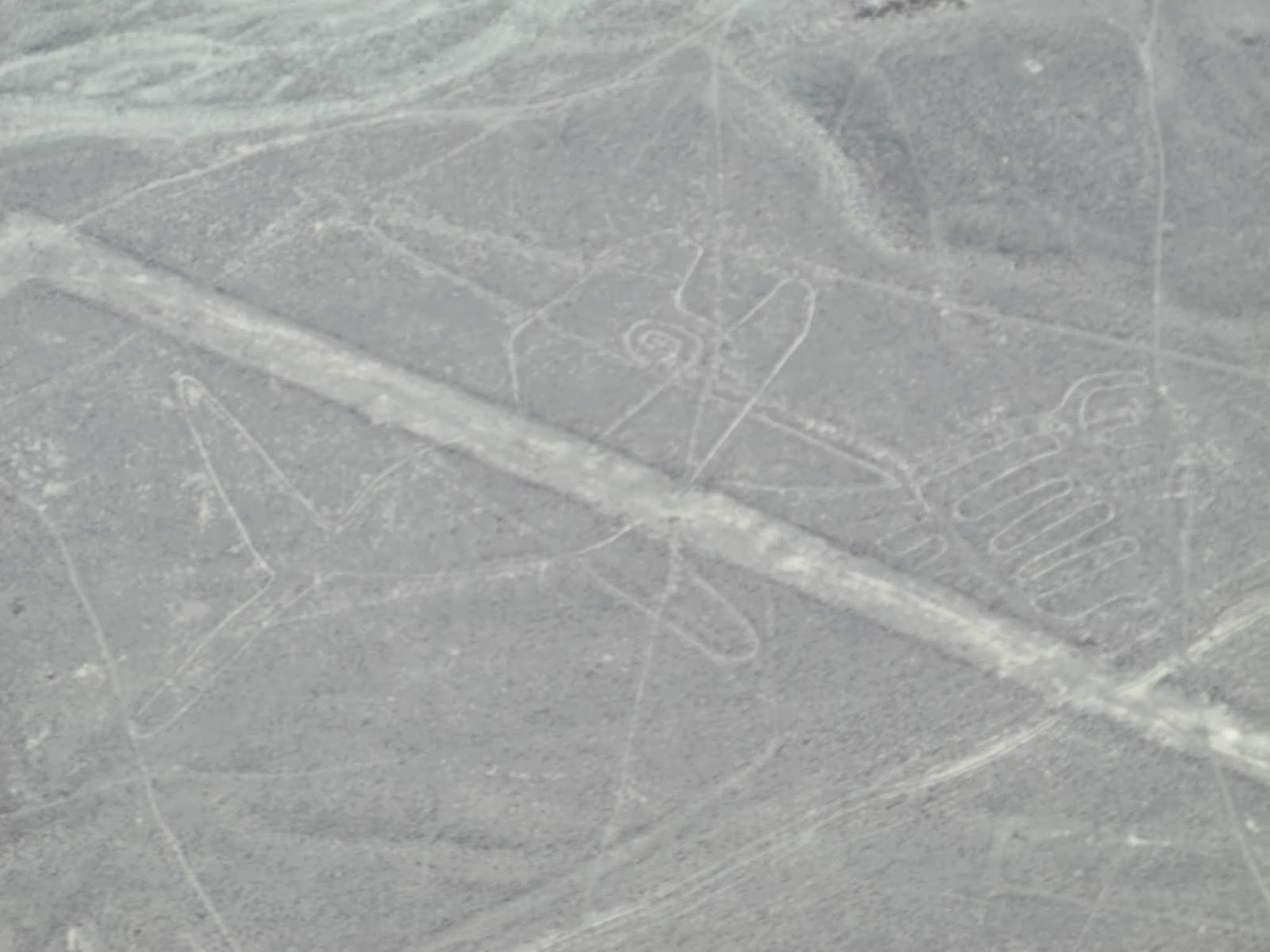 We took off with five of us total in the plane and headed directly for the lines.  A 50 meter killer whale was the first image and about three minutes from the run way. It was so cool!  The plane circled with the image just below the wing tip.  There was a little turbulence along with the steep spiral, but we had good pilots.  I was only a little nervous, and not motion sick at all.  The Nazca lines were just far too amazing! 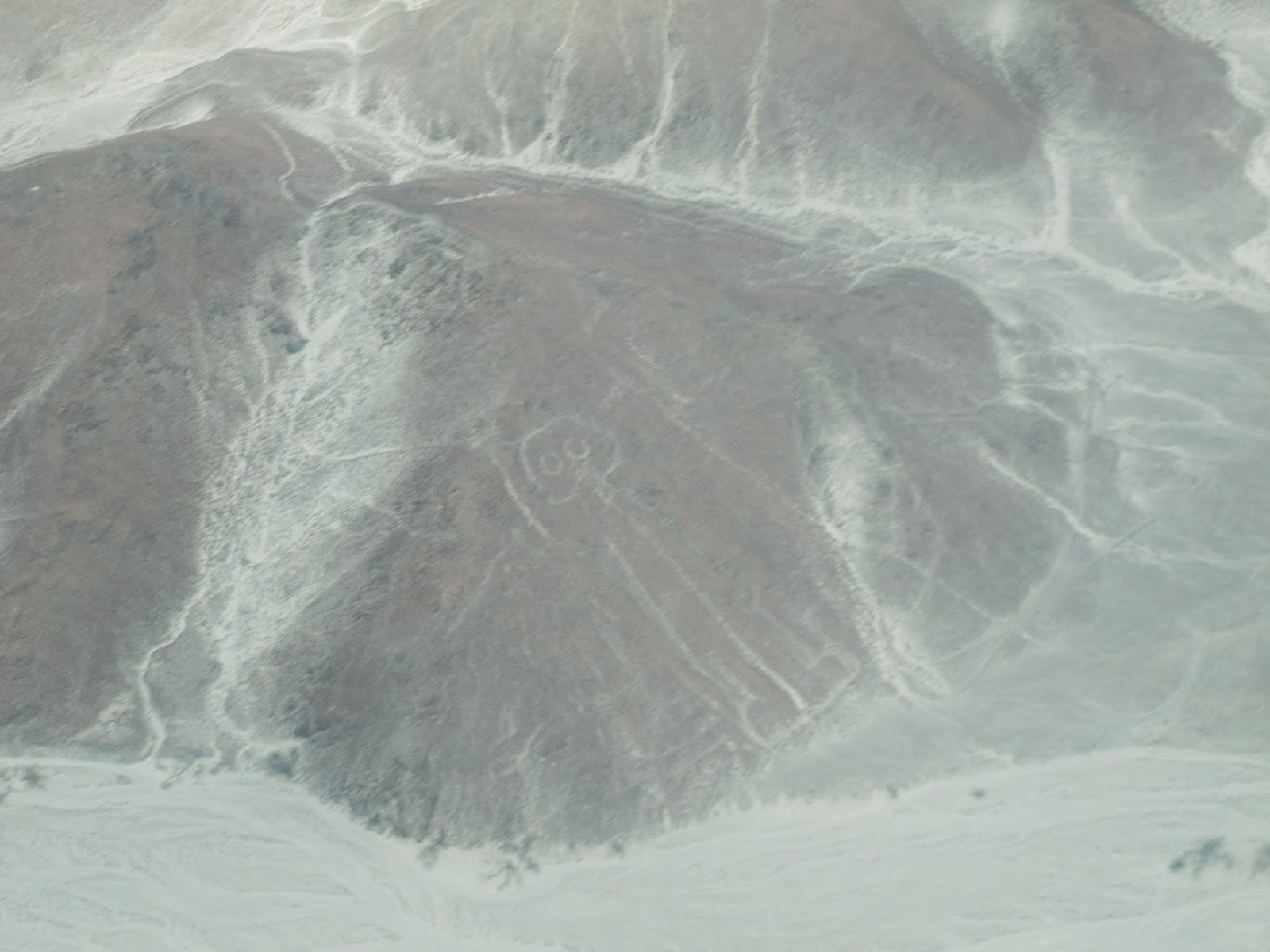 This is an astronaut 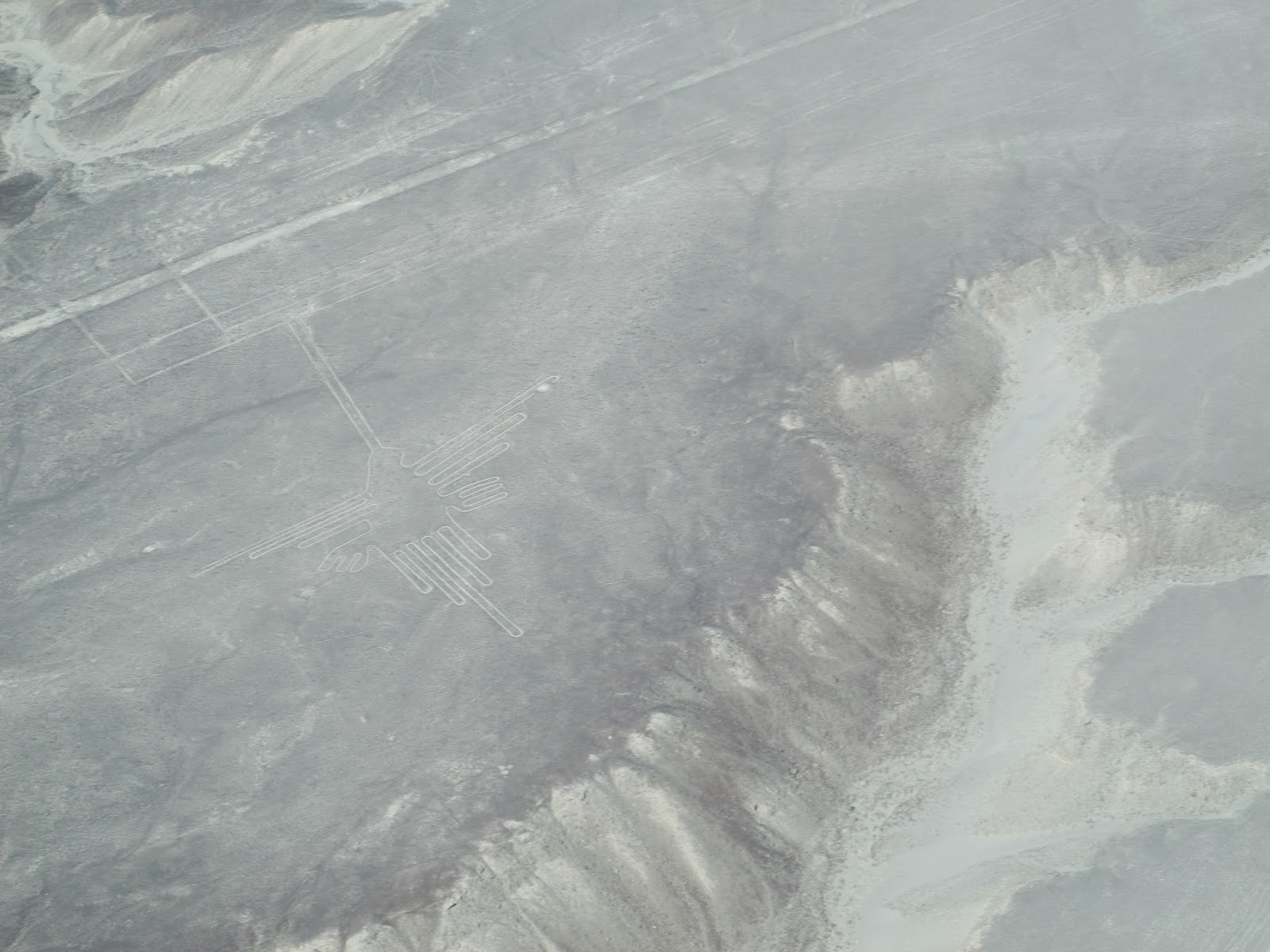 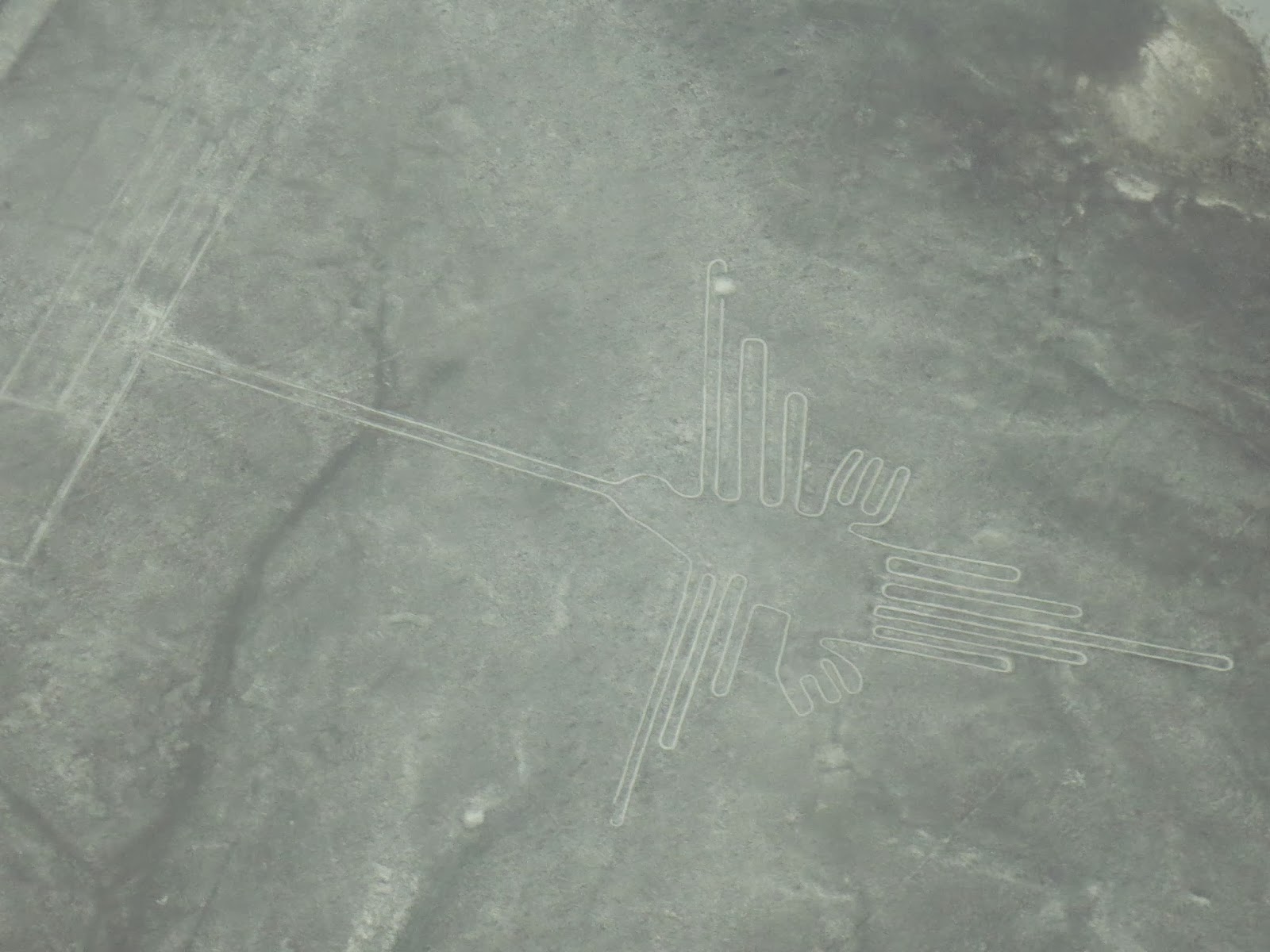 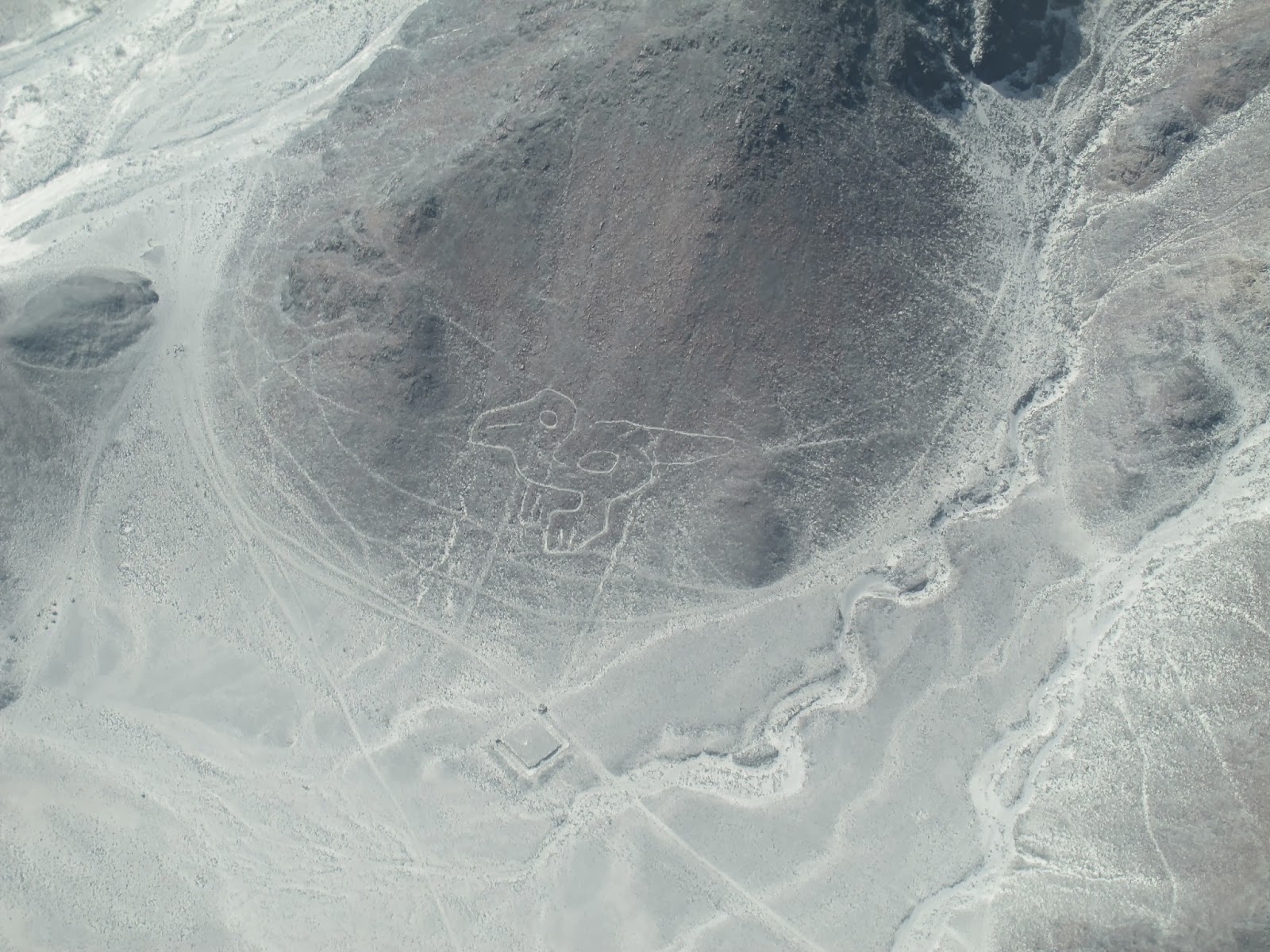 This was either a bird or perhaps a baby dinosaur 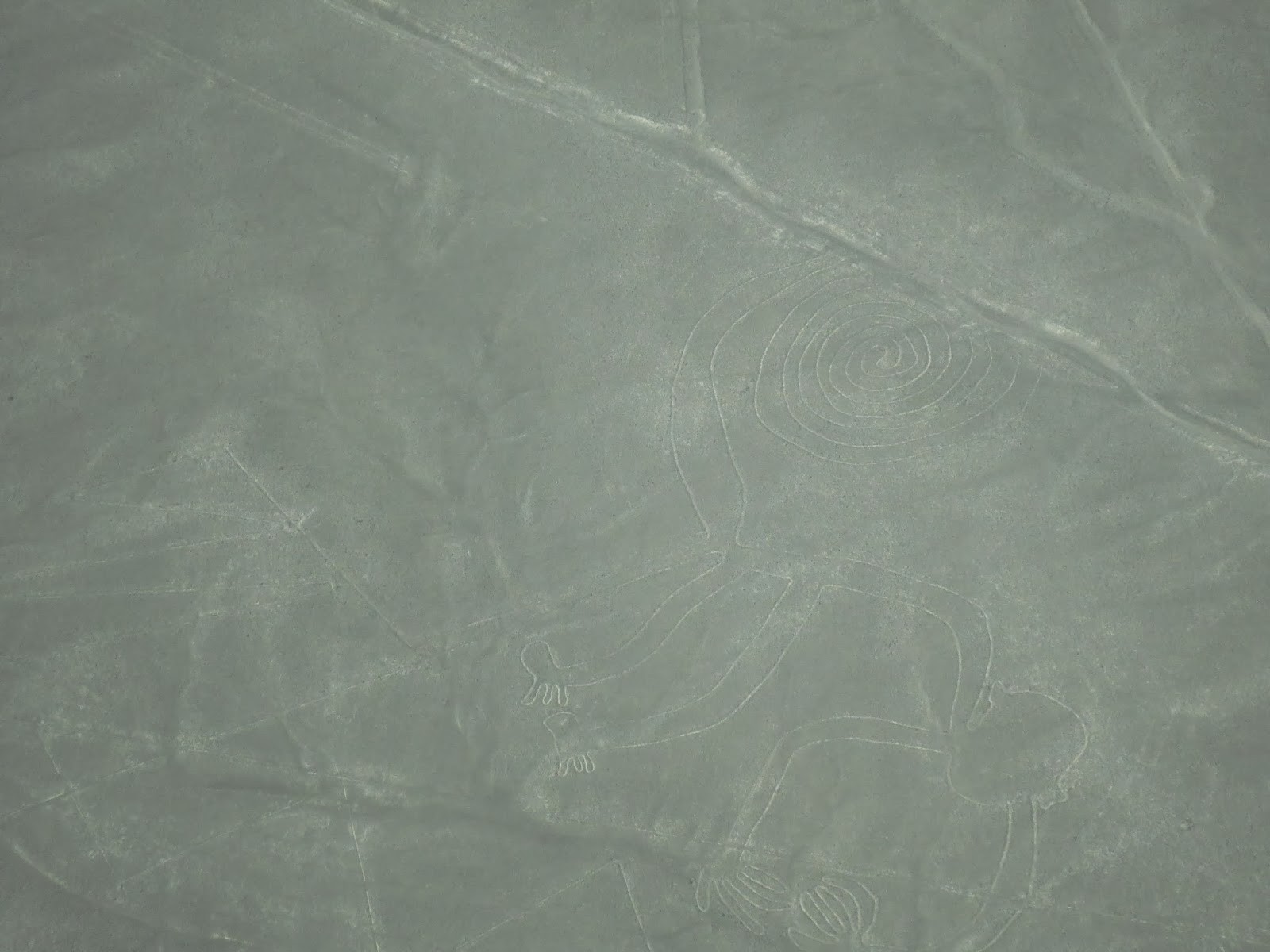 My favorite, the monkey 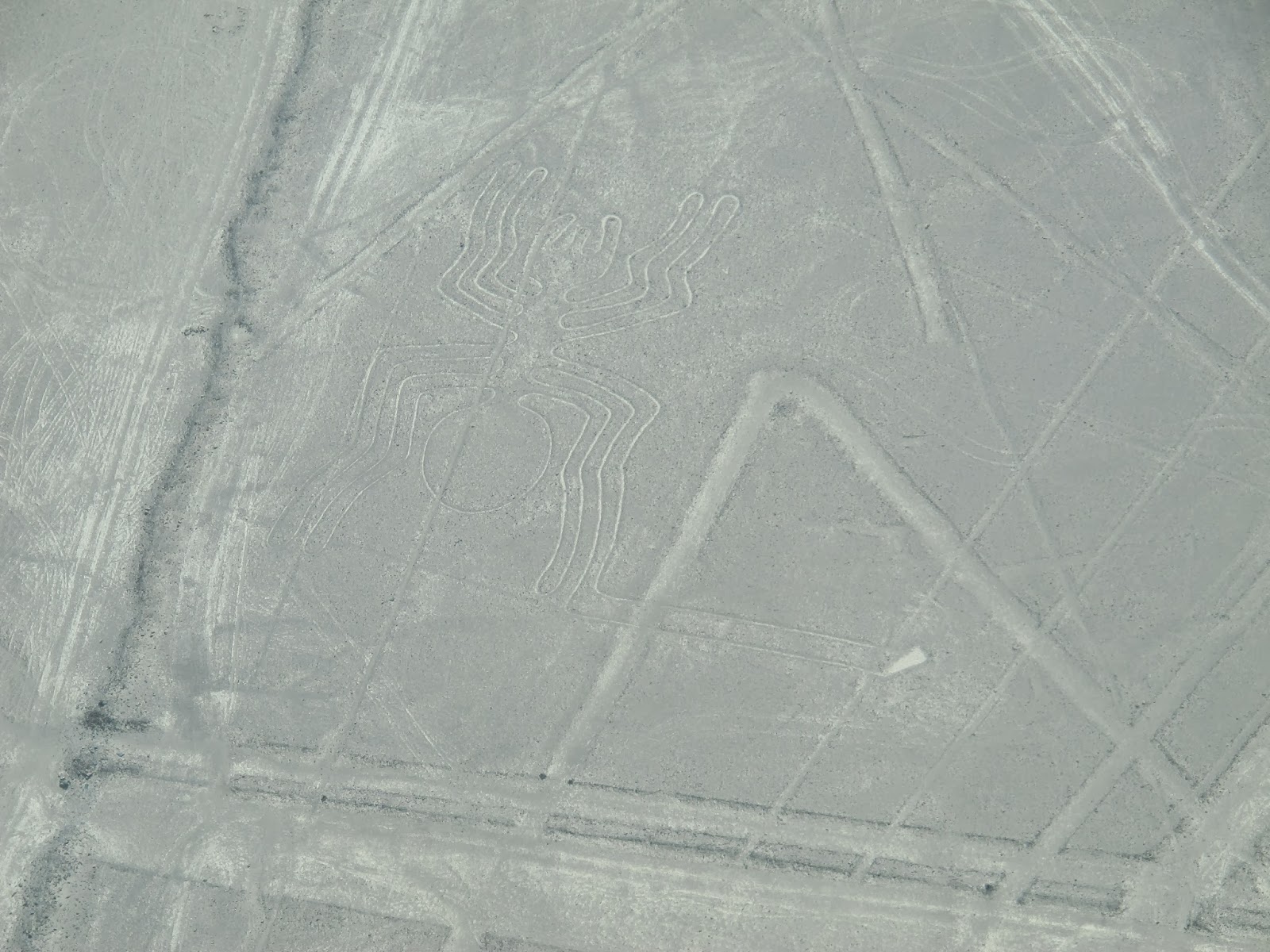 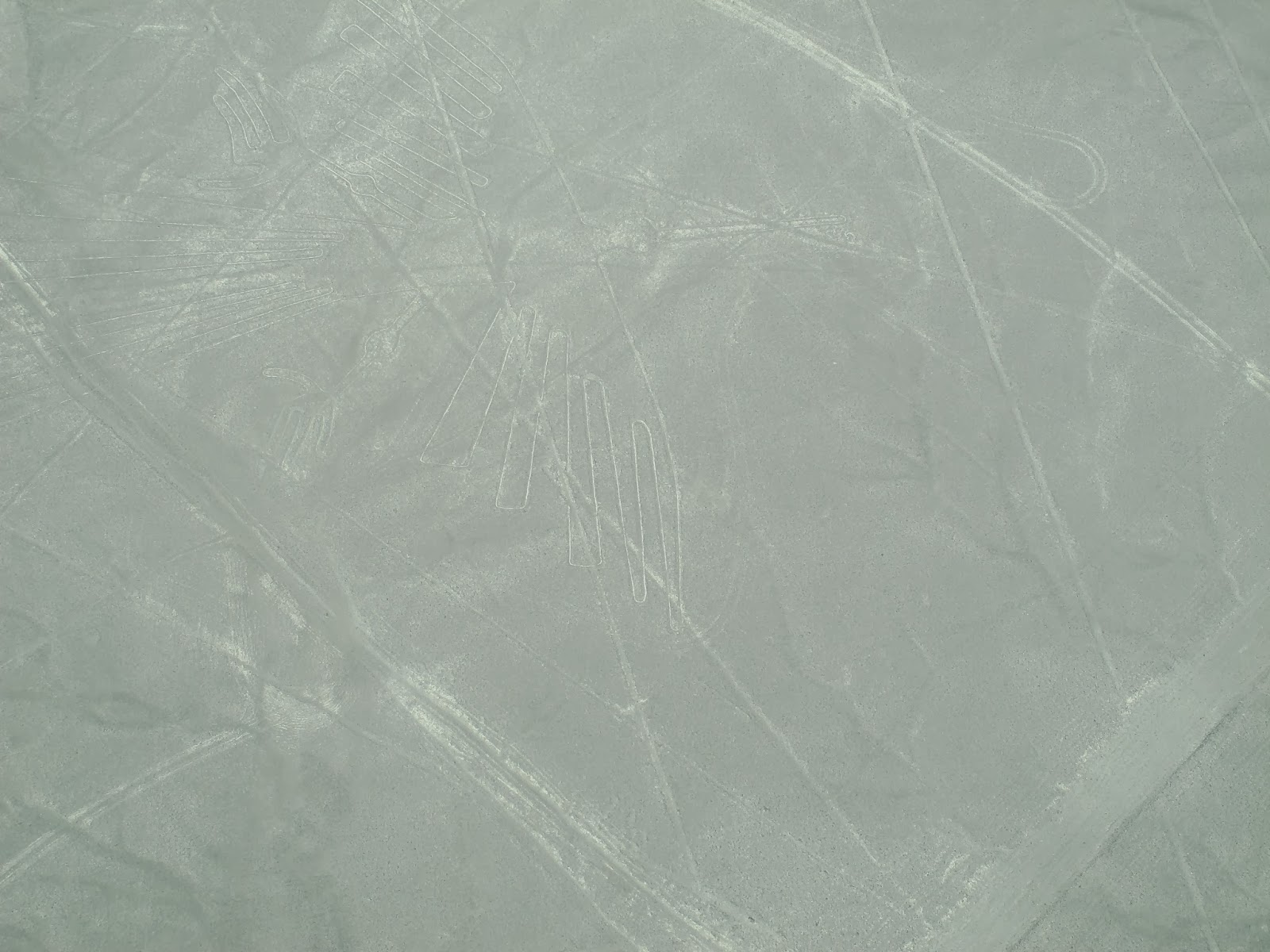 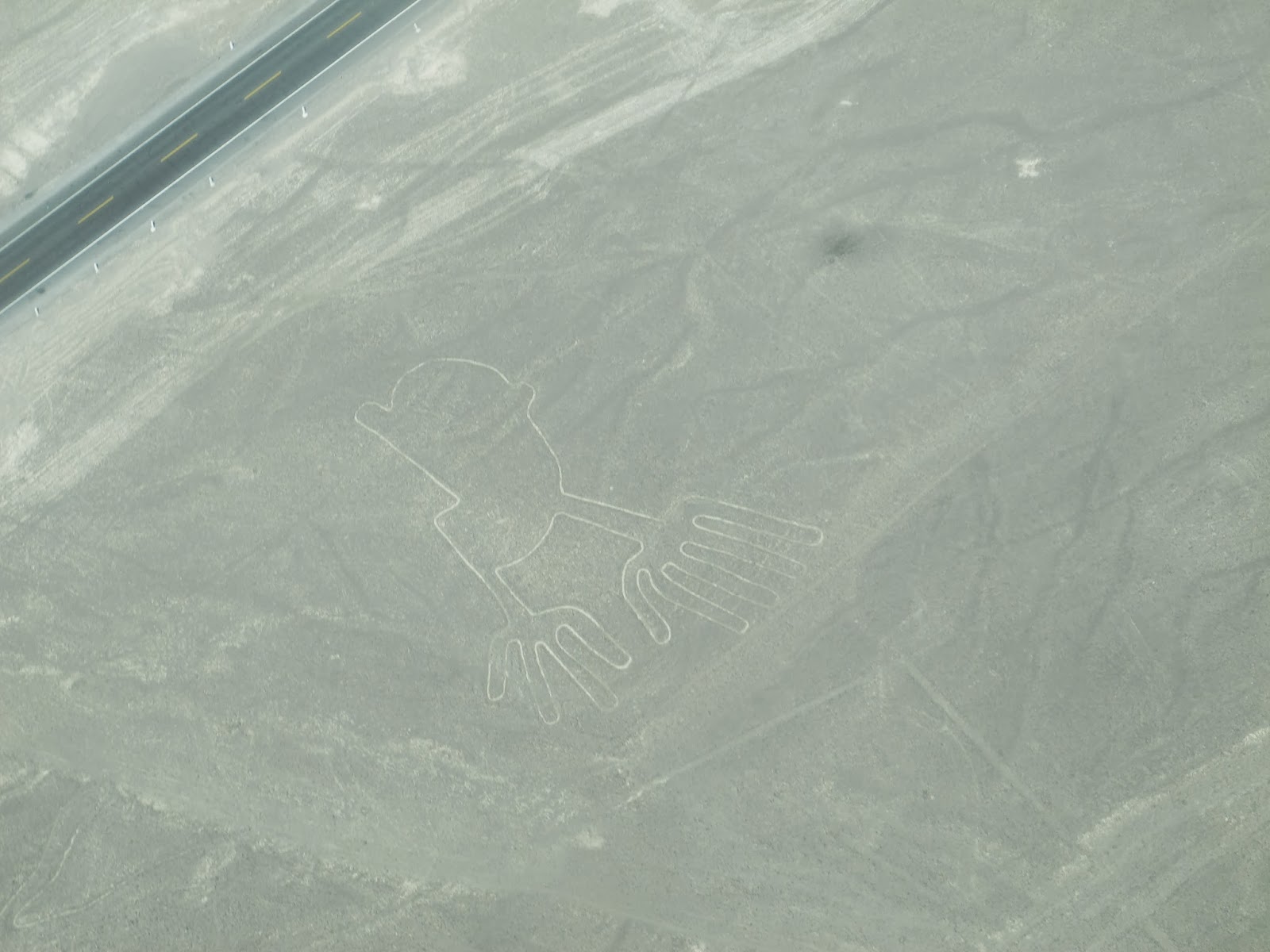 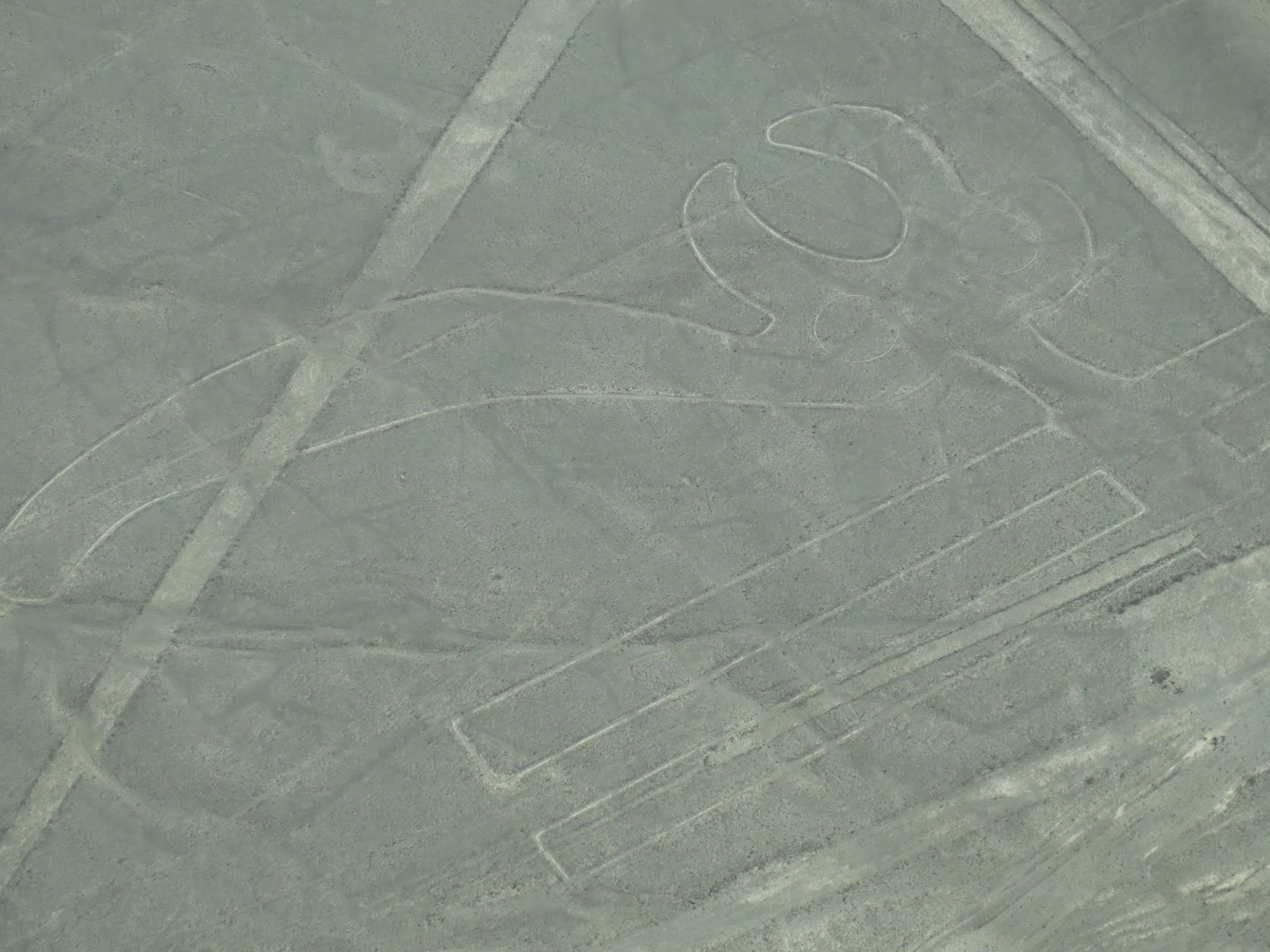 A big parrot, you can see his head here

We flew in the middle of the day, so the sun washed out a little of the definition.  Also, the images are very old.  I was so sad when our 30 minutes were up, I literally could have flown for hours over the images.  They were so fascinating!  We targeted 13 images, as does every flight I believe, some of witch the photos didn't turn out well enough to post, but there were hundreds of images all over the desert.  They were a little less grand, or a little less defined, so the pilots just flew over them, but they were amazing.