Tim: The bus ride from Puno to Arequipa took almost 7 hours. We arrived into Arequipa early in the evening. Because there were six of us in our group we took two taxis to our guesthouse. We found some dinner and I nice Peruvian steakhouse then returned to our Guesthouse for some sleep. 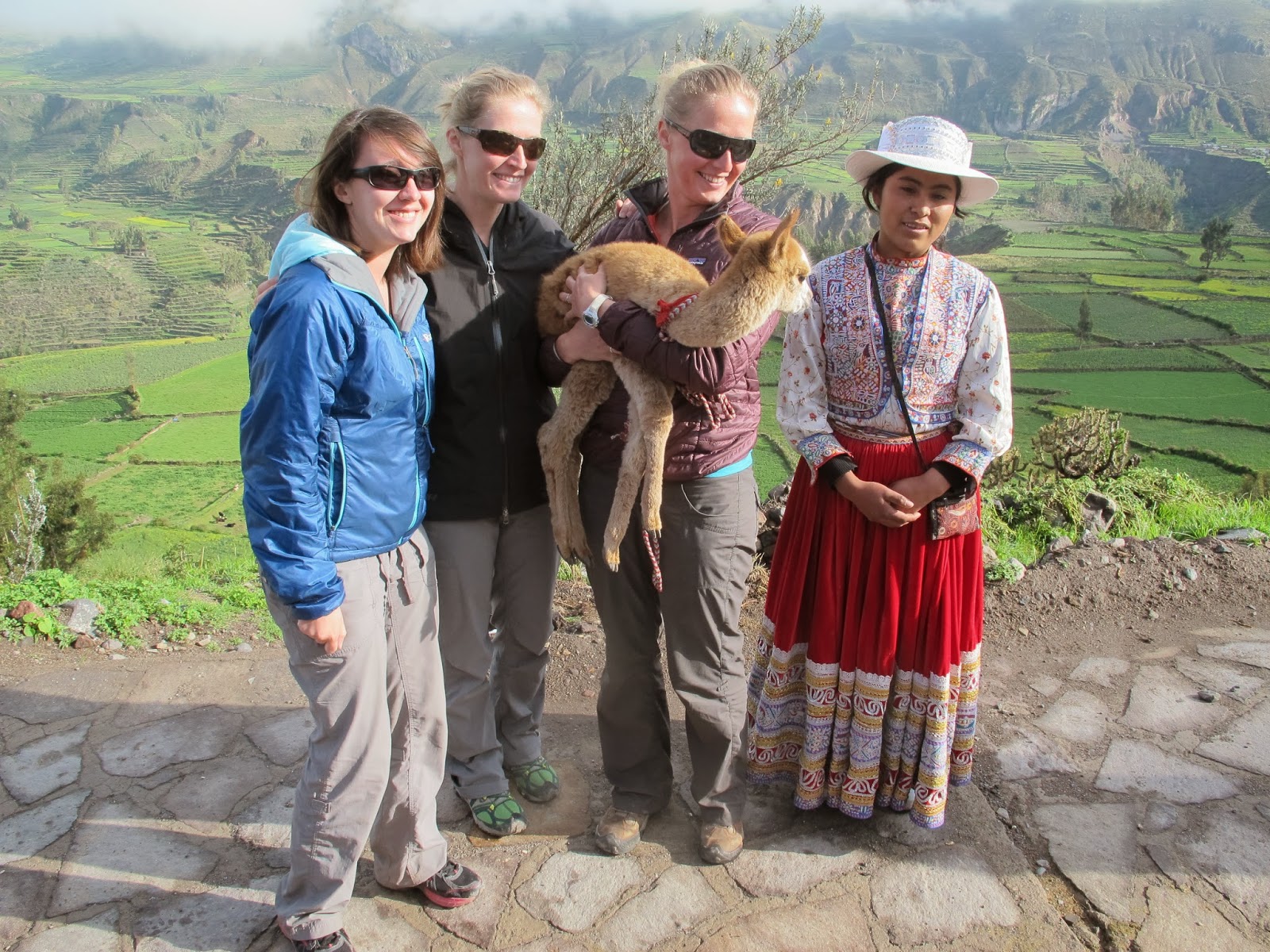 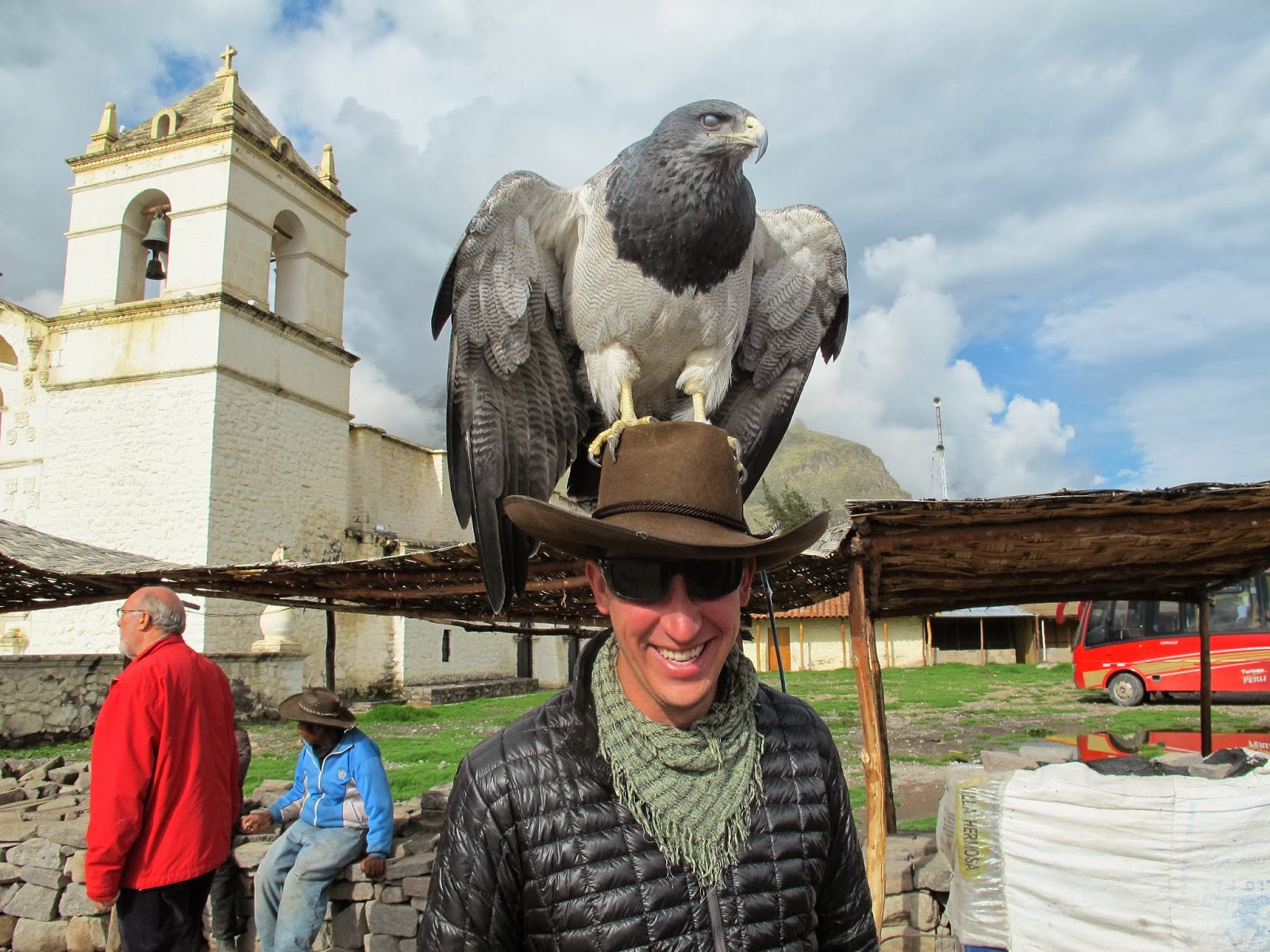 Our tour would begin at 8 in the morning. We would take a small our bus to Chivay, the gateway village to Colca Canyon. On the way we would visit a vicuna reserve, and the lookout of the volcanoes where the road reaches an elevation of 4910 meters or 16,104 feet. This would be the highest any of our group had ever been. 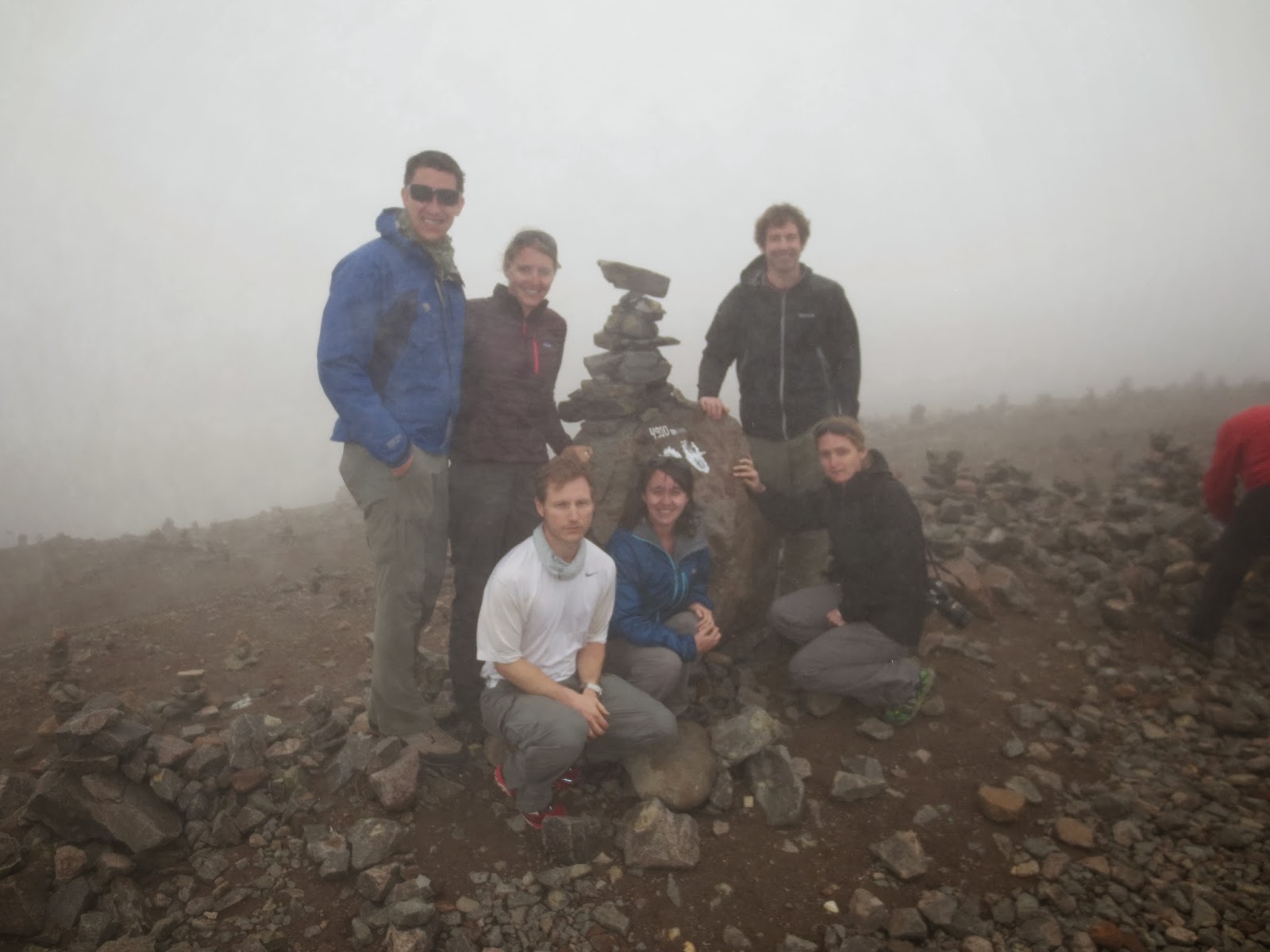 Vicunas are similar to llamas. Apparently there are four distinct animals in camel family in Peru. They are: llamas, alpacas, vicunas, and guanacos. Llamas and alpacas are domesticated while vicunas and guanacos are wild. We were able to see many vicunas along the road. 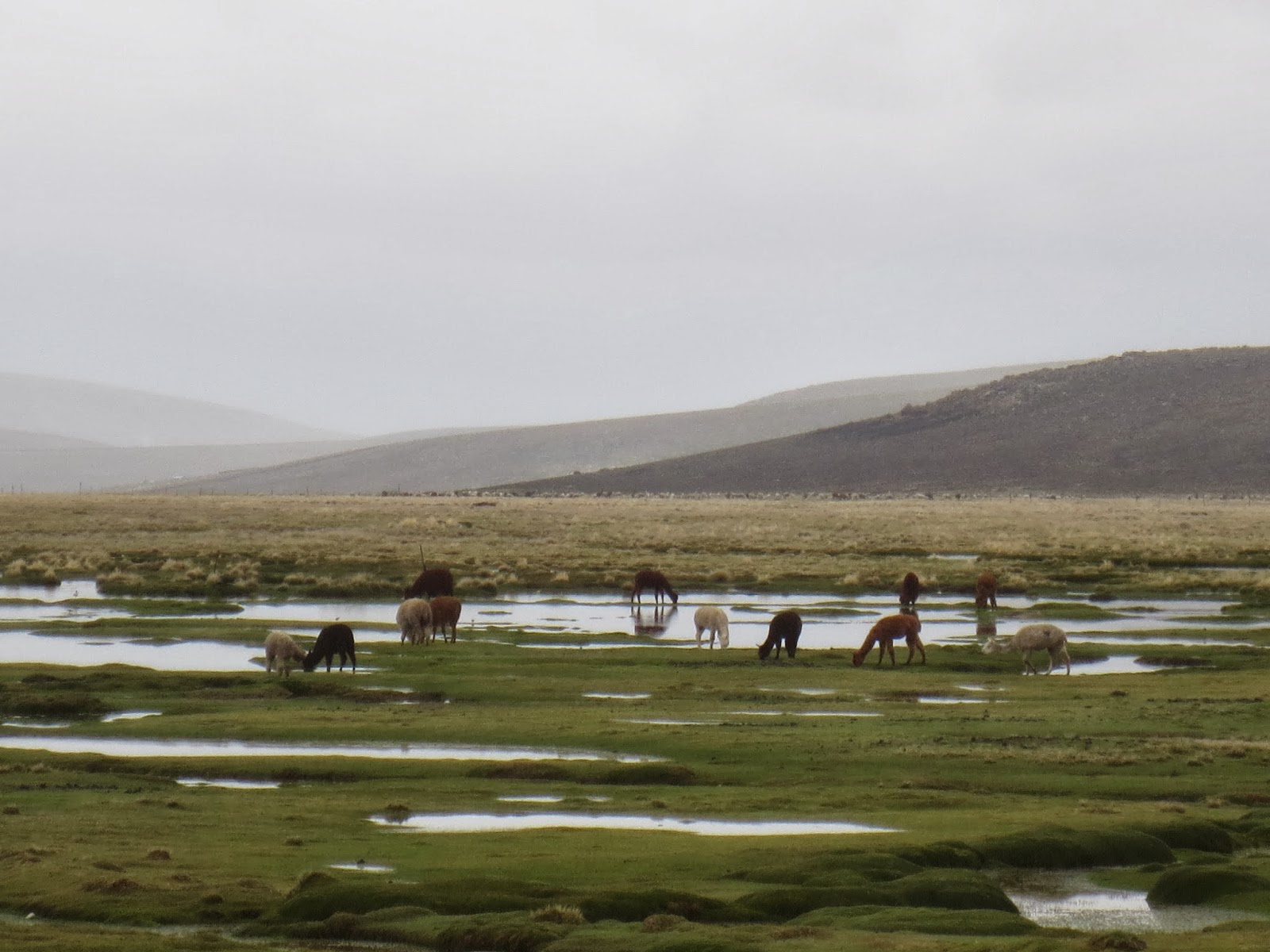 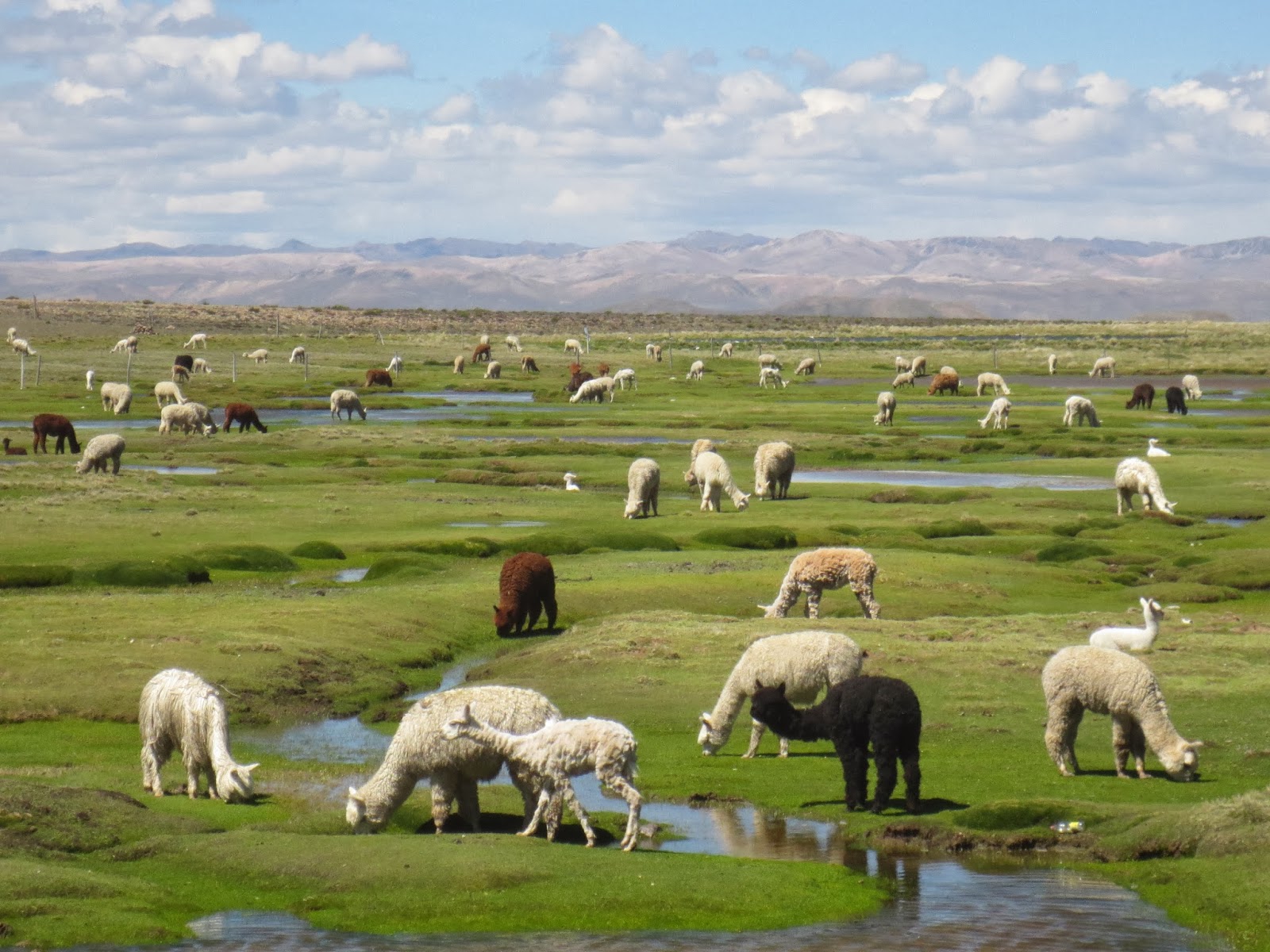 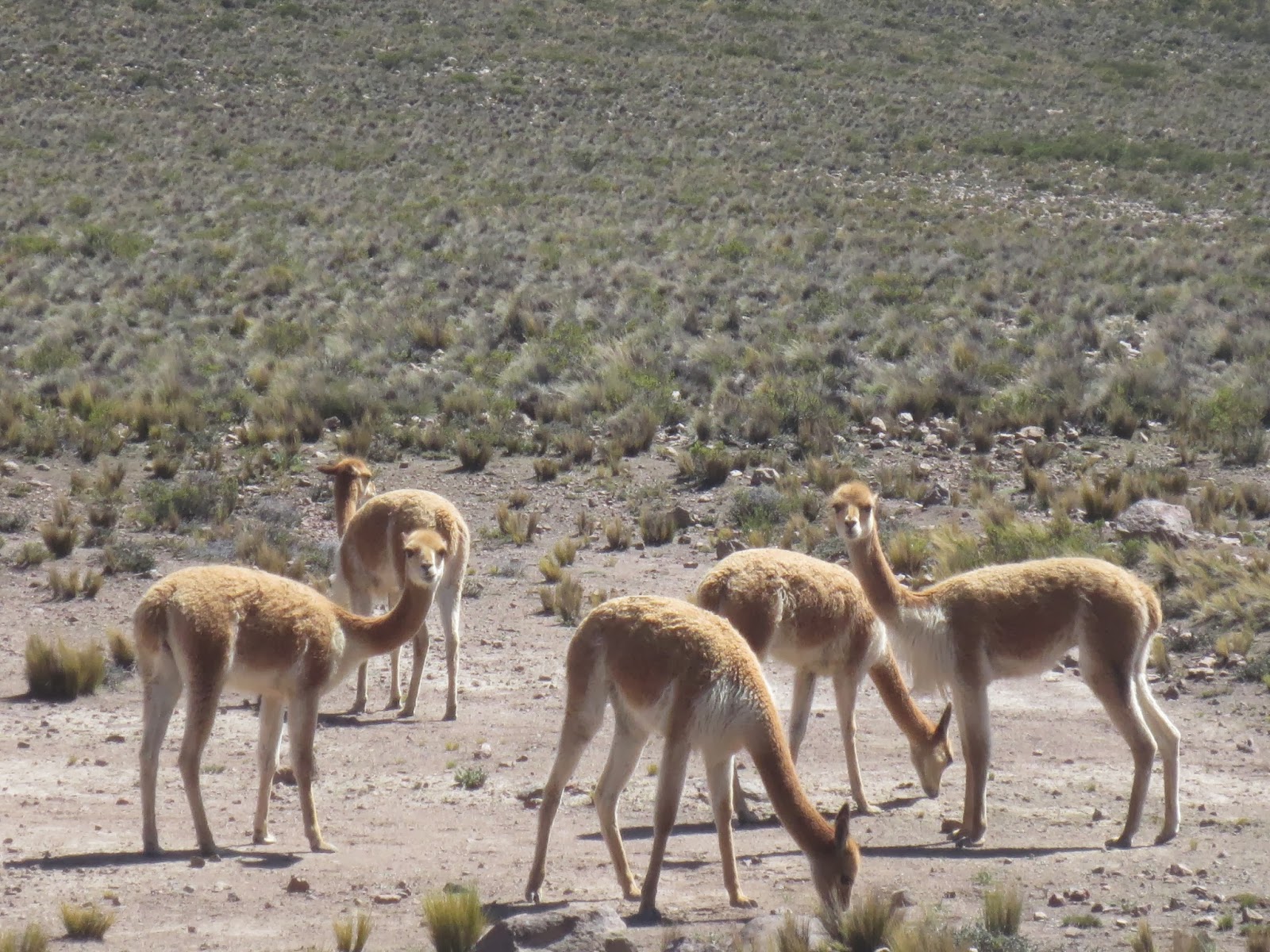 We reached Chivay in the early afternoon and ate lunch at the recommended Peruvian buffet restaurant. The food was pretty good. Amber was not feeling well at this point and took a nap while the rest joined the tour group for an outing to the hot springs nearby. 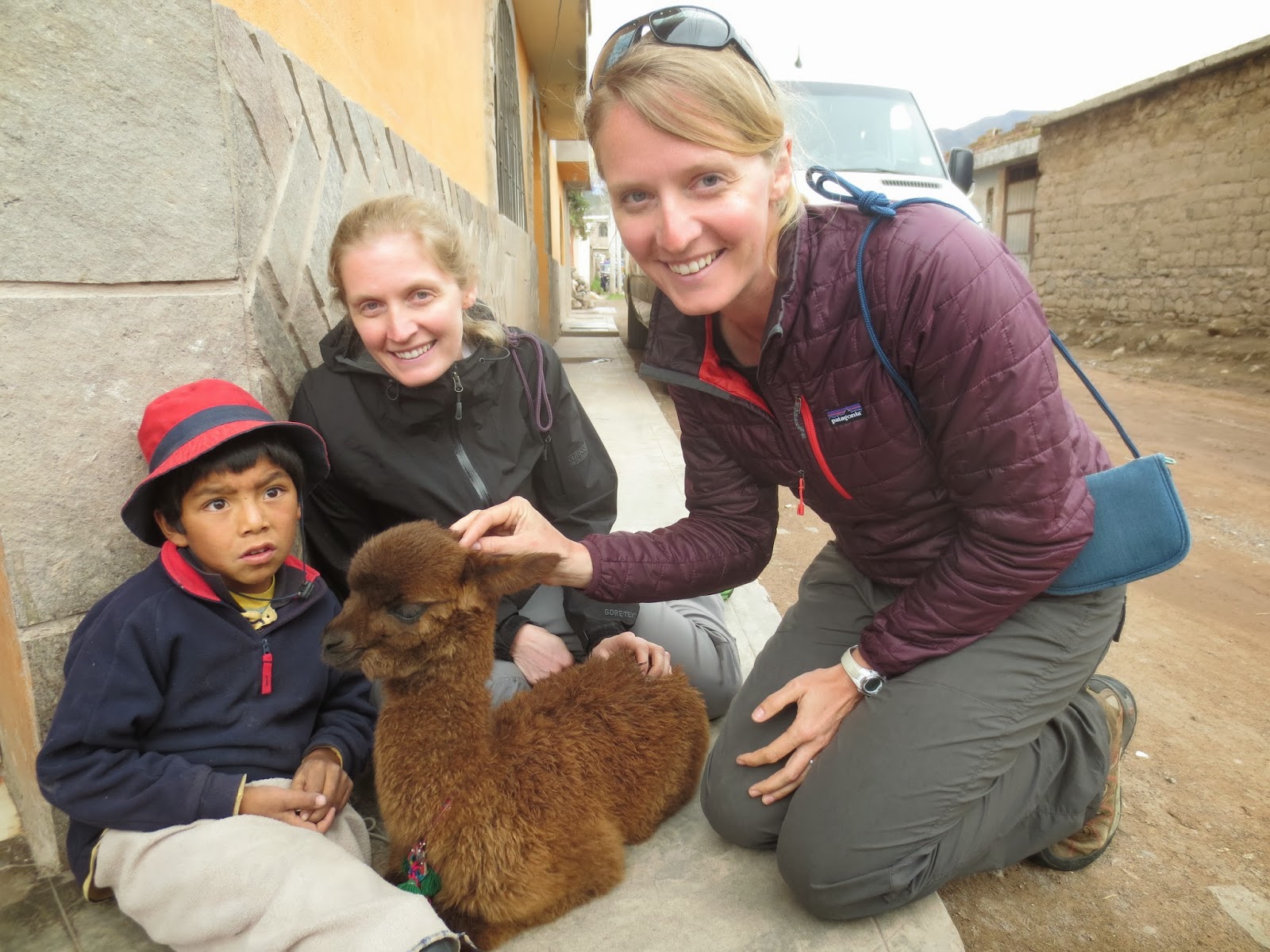 The road to the hotsprings was a very bumpy narrow dirt road. It was also raining a fair bit. I noted that in the USA we would never drive a two axel two wheel drive bus down such a road.

The hot springs were lacking. There were only two pools for us to use and they water was not very clean and not very hot. We enjoyed ourselves any way for an hour before climbing the hillside in the rain back to our tour bus.

About halfway back to Chivay, our driver cut a steep corner to sharp and ground out the back of the bus in the muddy dirt road. Everyone had to get off the bus. Once we looked at what happened we realized the bus was pretty stuck and risked tearing the back of the bus off.

Everyone seemed to have an idea of how to get the bus unstuck. Other vehicles came up the road behind us, but the bus was blocking the entire roadway so no vehicles could pass until our bus was free. The woman gathered up hill of the bus while the men collected large flat rocks to but under the low side tires that were high centered. This was complicated by the rain which made the roadway very muddy. After 30 minutes of work, the bus driver was able to pull out of the ditch. When we re-boarded the bus everyone's shoes an sandals were covered in mud and made a mess of the bus floor.

For dinner we went to a restaurant that included cultural dancing. Everyone sat at on both sides of long tables and watched the show. Above us on the wall there was the carcass of a wild cat in a basket nailed to the wall. The wild cat was barely recognizable as a cat only by the texture of the fur and one shriveled up pay that was hanging out of the wicker basket. It did not even appear to be stuffed or taxidermied. It was as if someone killed a wild cat then threw the carcass in the basket on the wall to shrivel up. I tried asking the guide why it was there, but he didn't have an explanation.

The cultural dancing was done by one man an one woman. In Chivay, the traditional dress of the men is similar to that of the woman. The men wear colorful dresses. We were told that this tradition started in colonial times when marriages were arranged by the parents for the purpose of increasing the standing of the family. As a result men would have to disguise themselves as women in order to court woman in secret. 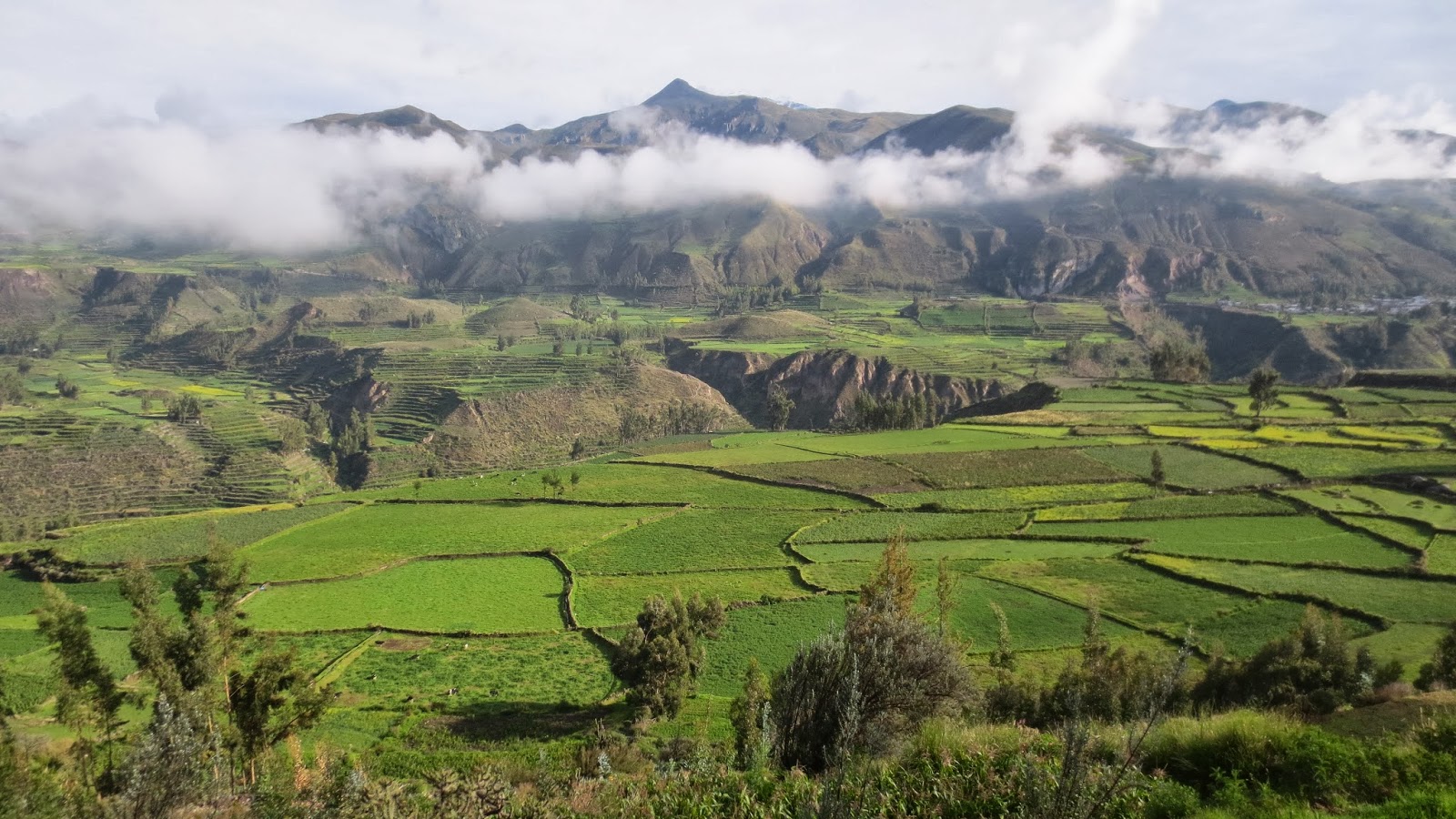 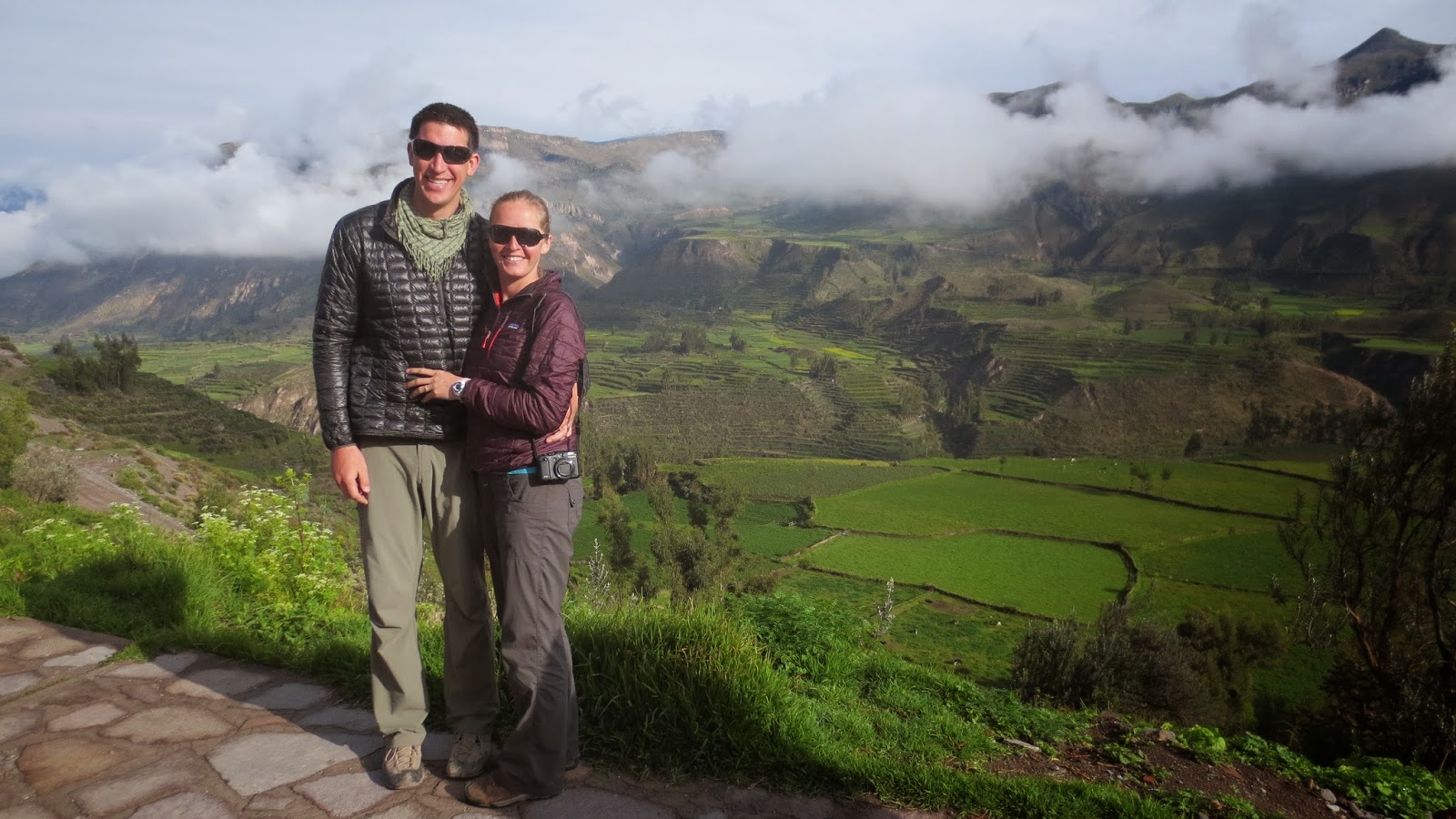 Amber:  The next morning we woke up bright and early, had a traditional Peruvian breakfast of jam and bread, and met up with our tour van to head towards Colca Canyon.  It was still fairly misty out, so our guide was not particularly optimistic about us sighting Condors.  We had booked a hike into the canyon, while the rest of our bus were turning around at the condor viewing spot.  When it was clear that none were to be seen, Jerami, Eloise, Dwight, Heather, Tim and I were loaded onto a smaller van and transported to the trail head a few kilometers down the mountain.  Heather had accidentally forgotten her rain coat in the van, but a second group of hikers were able to pull over at our original bus, pick it up for her, and deliver it to us at the trail head.  We had strict instructions to bring lots of water, and it was at this point that I realized that one of my water bottles had rolled out of the side of my pack, and it too was still somewhere on our bus.  Thankfully, Tim shared some of his water. 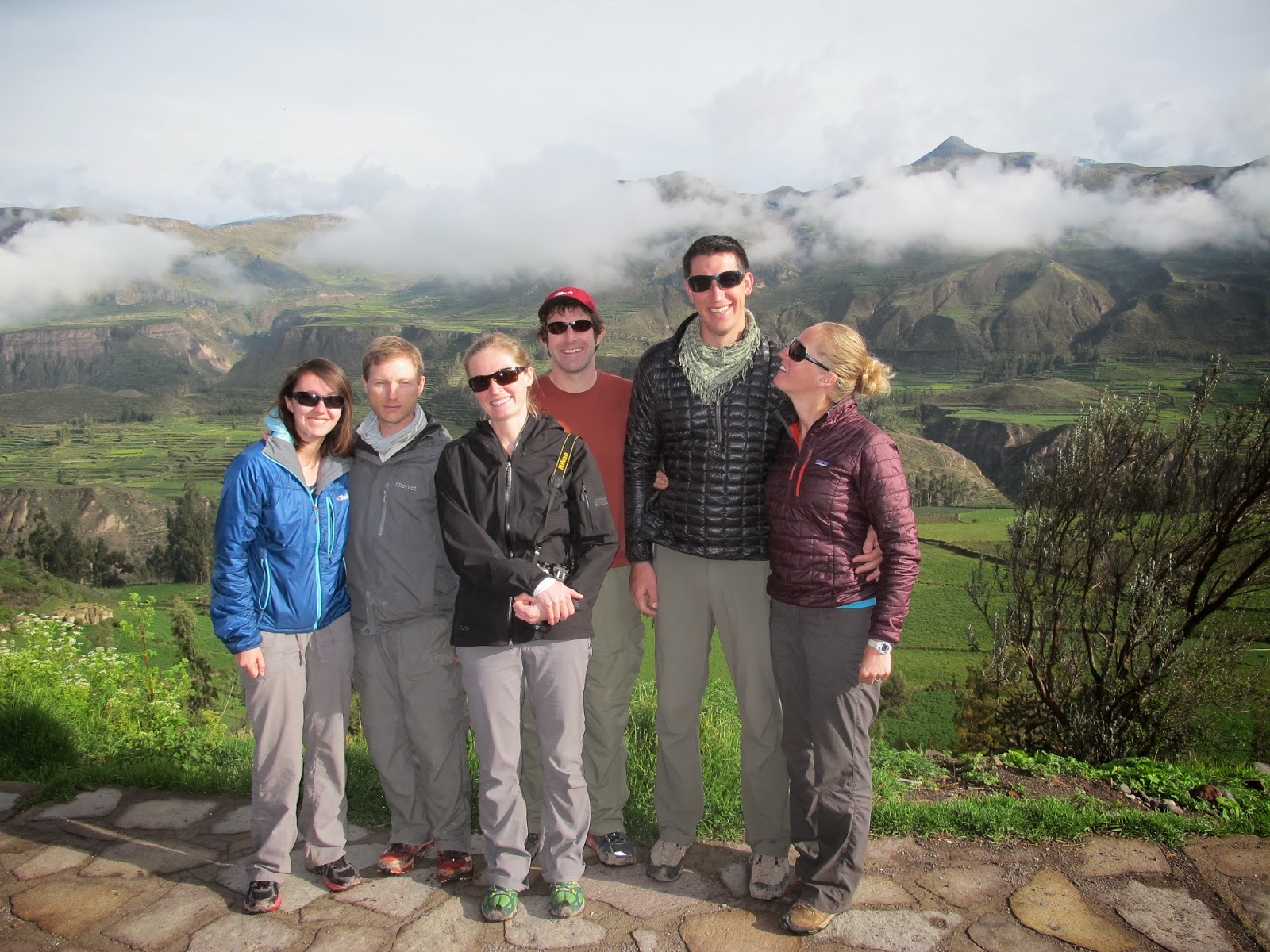 The deep canyon was filled with fog, so we could not see how far down the steep walls went as we hiked down our trail.  We were all happy to be outside, hiking in the beautiful canyon regardless.  As we went deeper, some of the fog lifted, and we actually spotted a condor!  He was not particularly big, only about 6' wingspan.  Adult male condor's can grow to having a 10' wing span.  He soared above us and dissapeared into some of the caves that peppered the canyon wall.  We saw two different condors, both about the same size, as we hiked down.  The closest we got was about 20 meters from them as they soared up the thermals, letting the up drafts lift them out of the canyon. 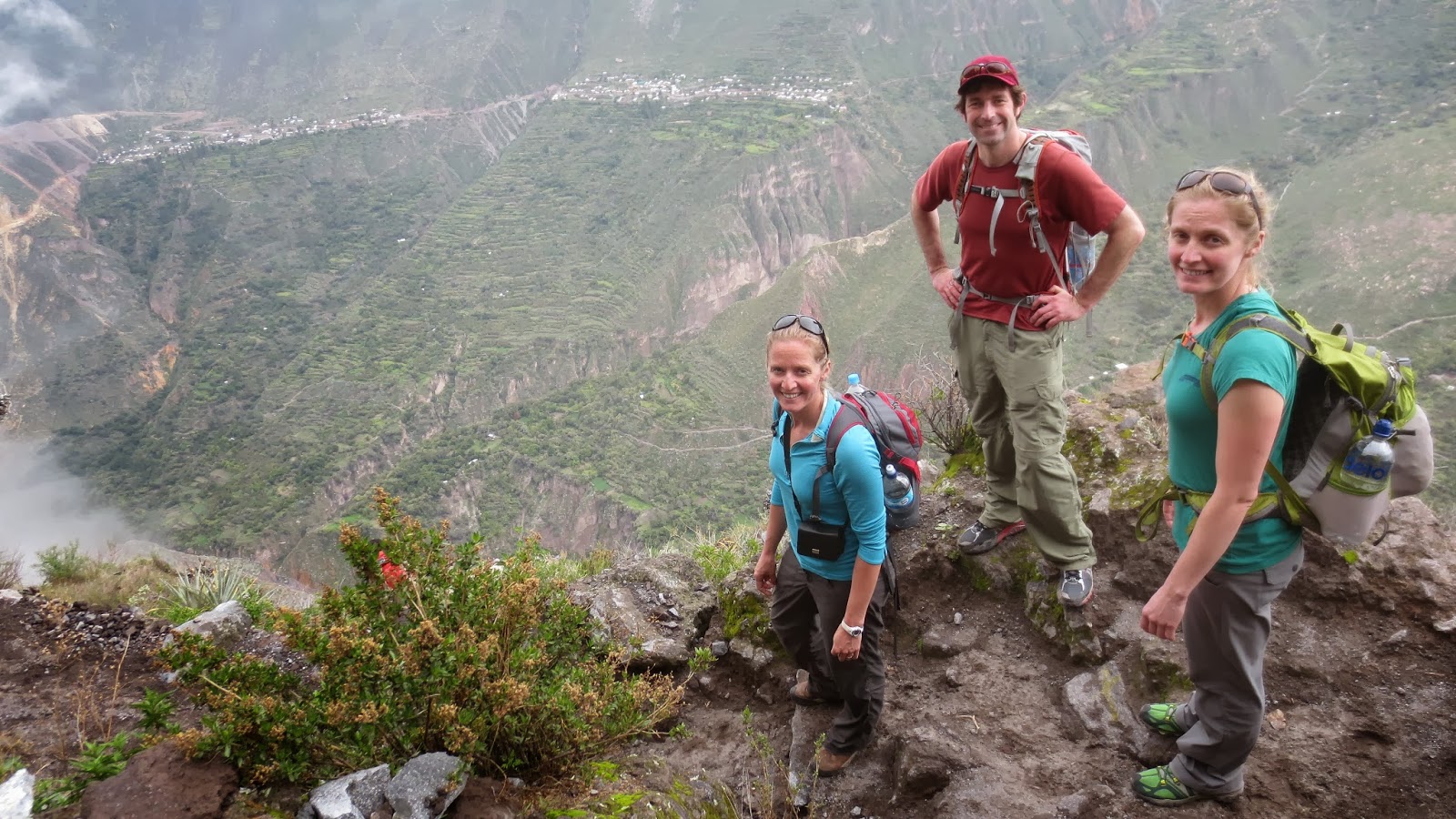 We finally reached the river that cuts through Colca Canyon. We had to cross a surprisingly sturdy hanging bridge, and scurry along a very narrow, very high up, steep trail to make our destination for lunch. Only foot traffic and mules (and the occasional cow) make the trail to the small village that perches just up from the river, but we were provided with alpaca, rice, and local avocados for lunch.  Not too filling, but pretty tasty, considering.  We hiked on, and a light rain started.  The trail took us up to a second village, a small, dirty town made of crumbling brick houses and rusted tin roofs, before dipping back down to the river.  This bridge was a lot less sturdy, and Tim of course thought it would be fun the bounce on the bridge, just to make sure that I was terrified as I climbed across the river, some 50' below. 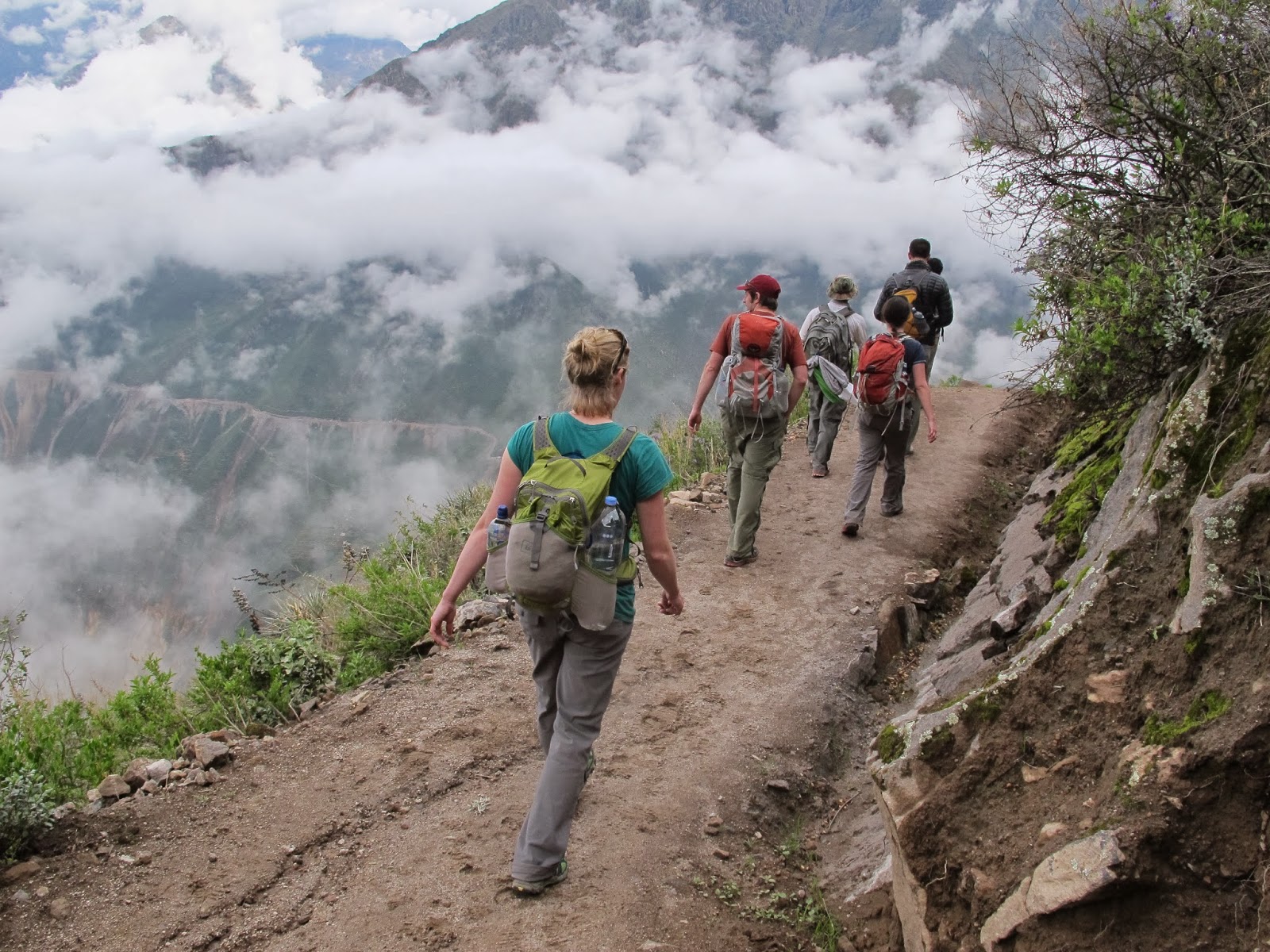 We arrived at our camp by about four. Little bungalow shacks waited for us. It was a little chilly, but the six of us Alaskan's could not resist the beautiful swimming pool.  It was cold and refreshing, and we all decided we deserved a beer for our long days hike! 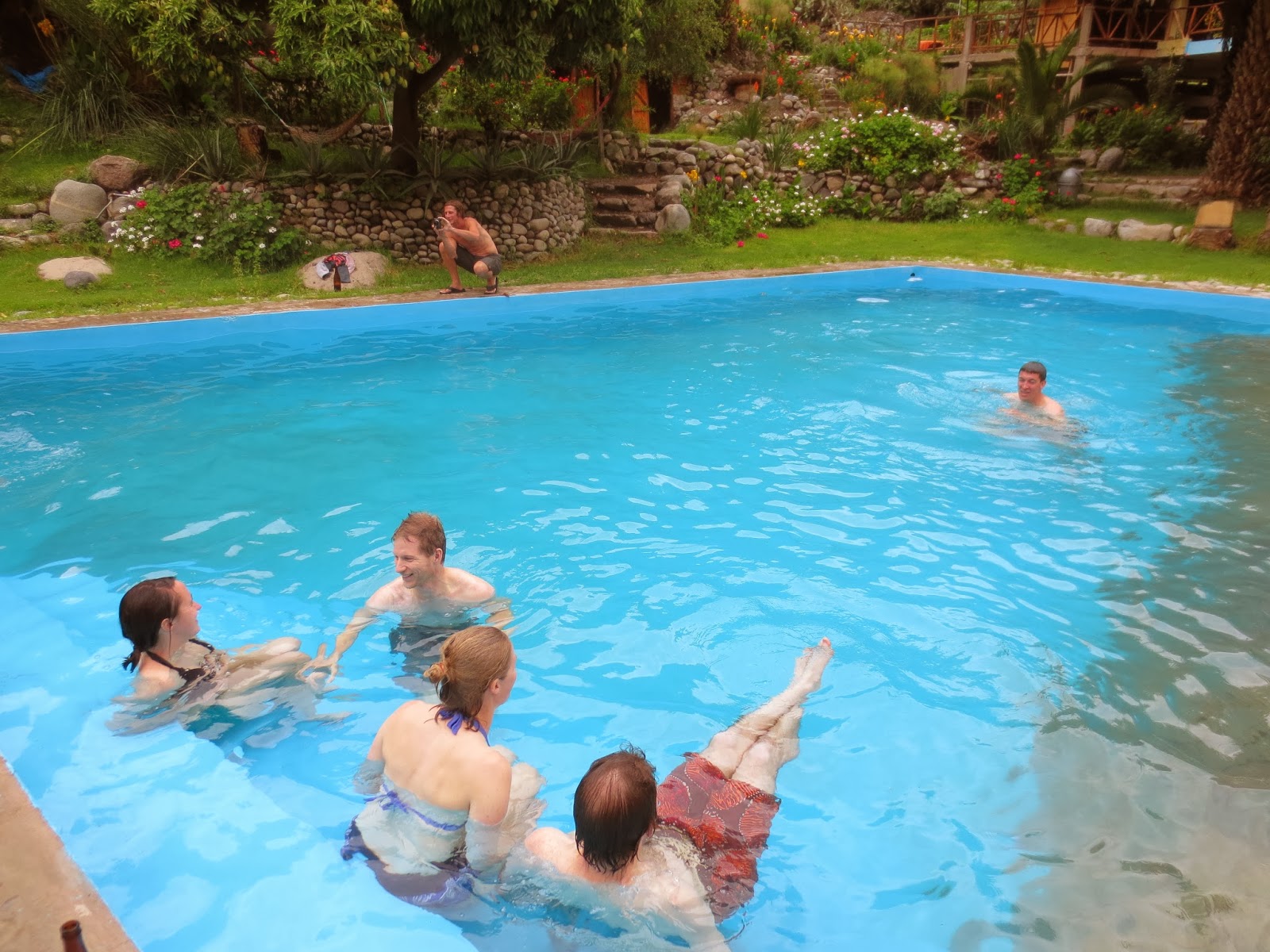 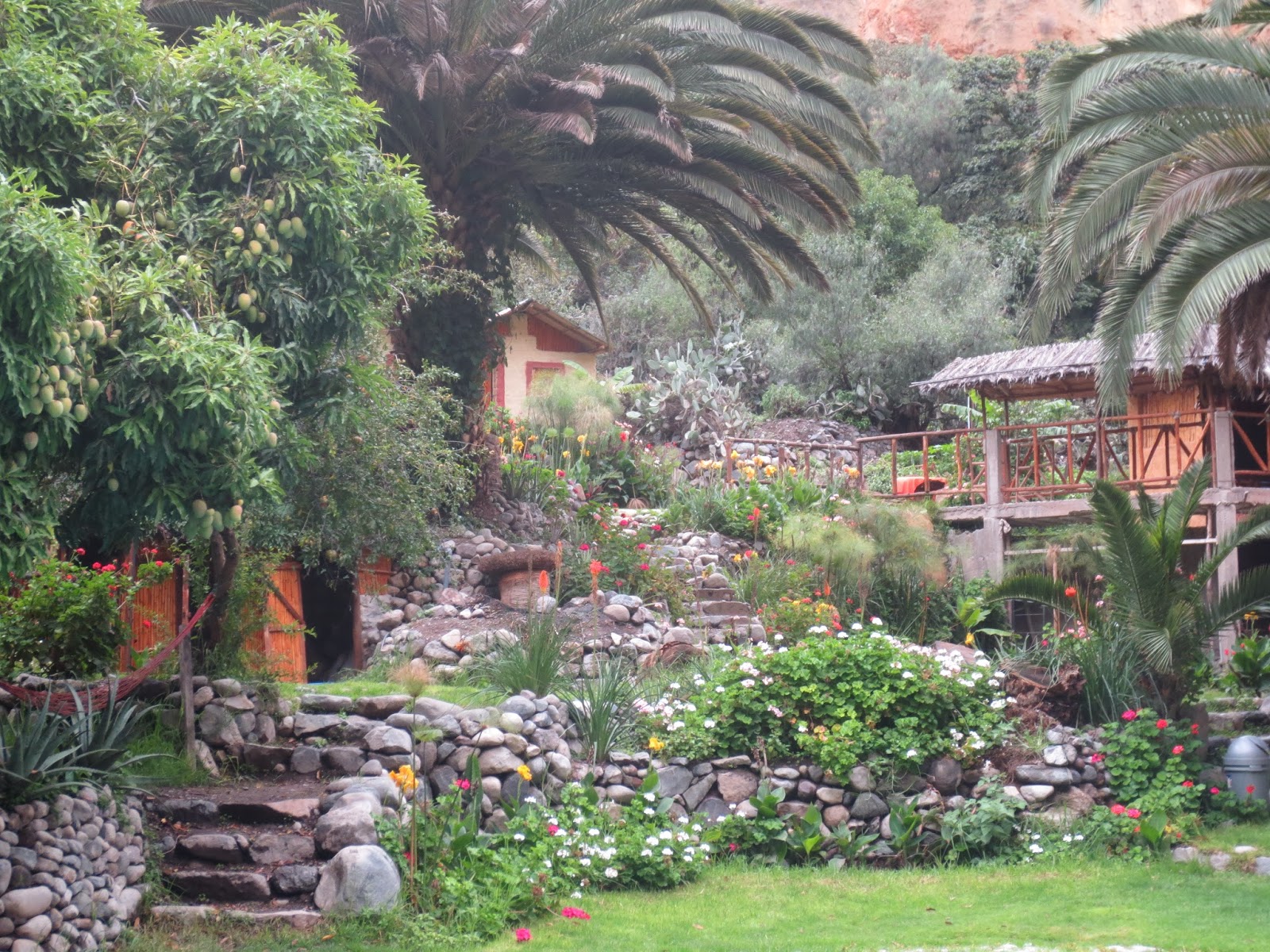 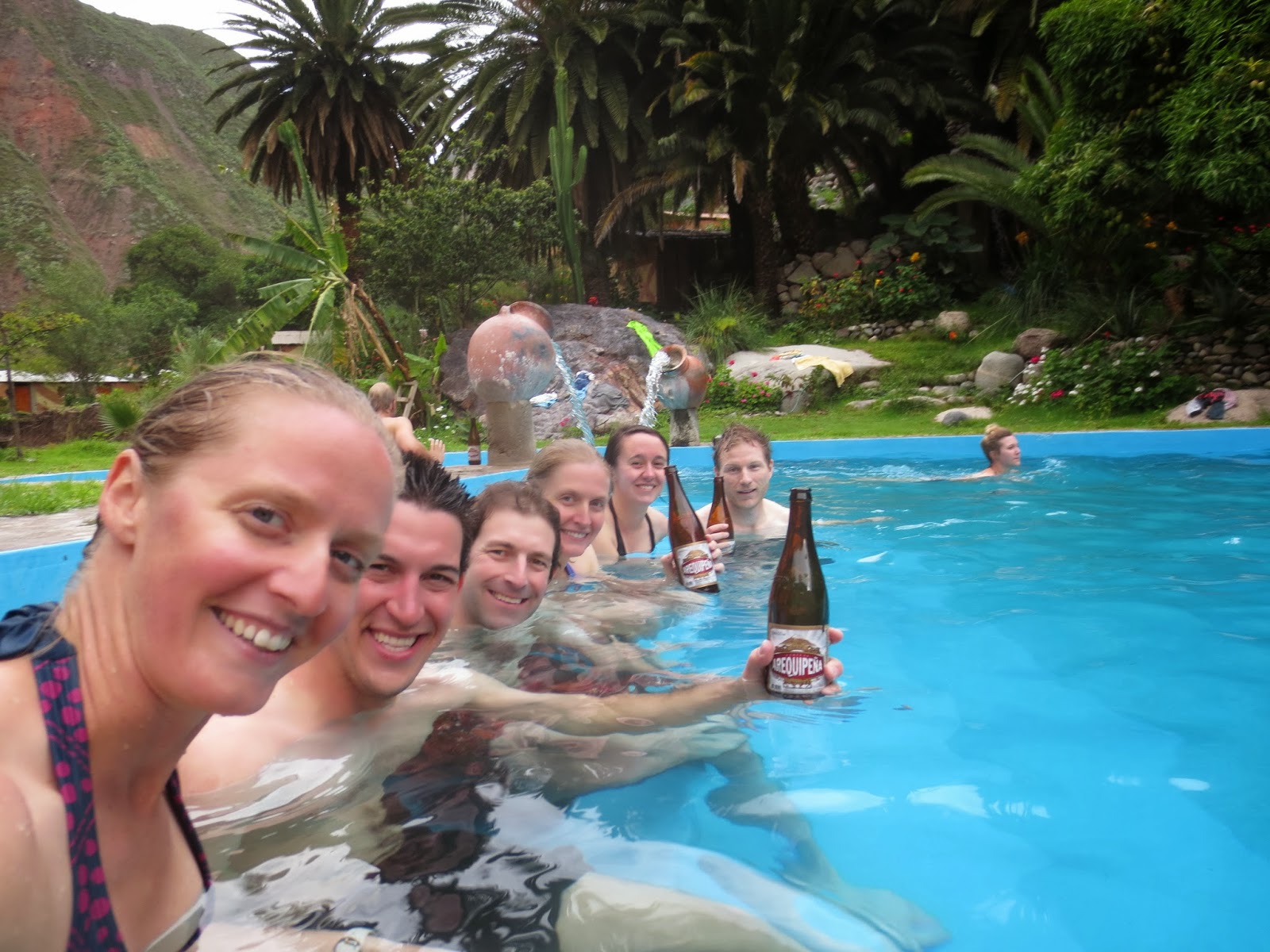 The next morning, we were awoken at four in the morning to make the dark, steep climb back to the top.  Breakfast was not to be provided, or coffee either, until we reached the top of the canyon.  Talk about motivation!  It was supposed to take three hours, but we made the climb in two and a half.  Dwight had kindly brought, and shared, Laura bars, hence, we all survived.  It was a steep hike, but a beautiful, clear morning.  The view of the canyon, as we climbed up, and once we reached the top, was amazing! 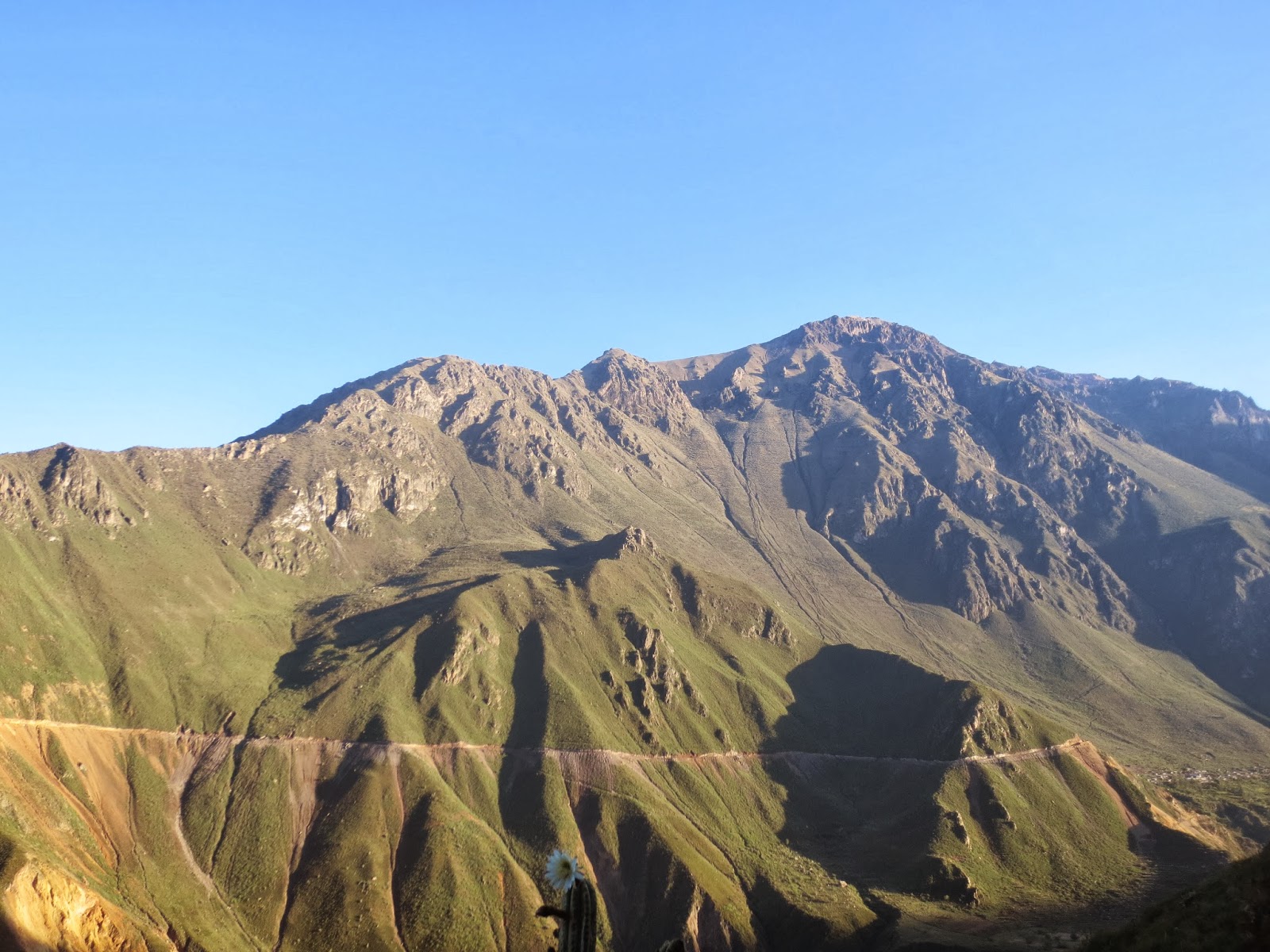 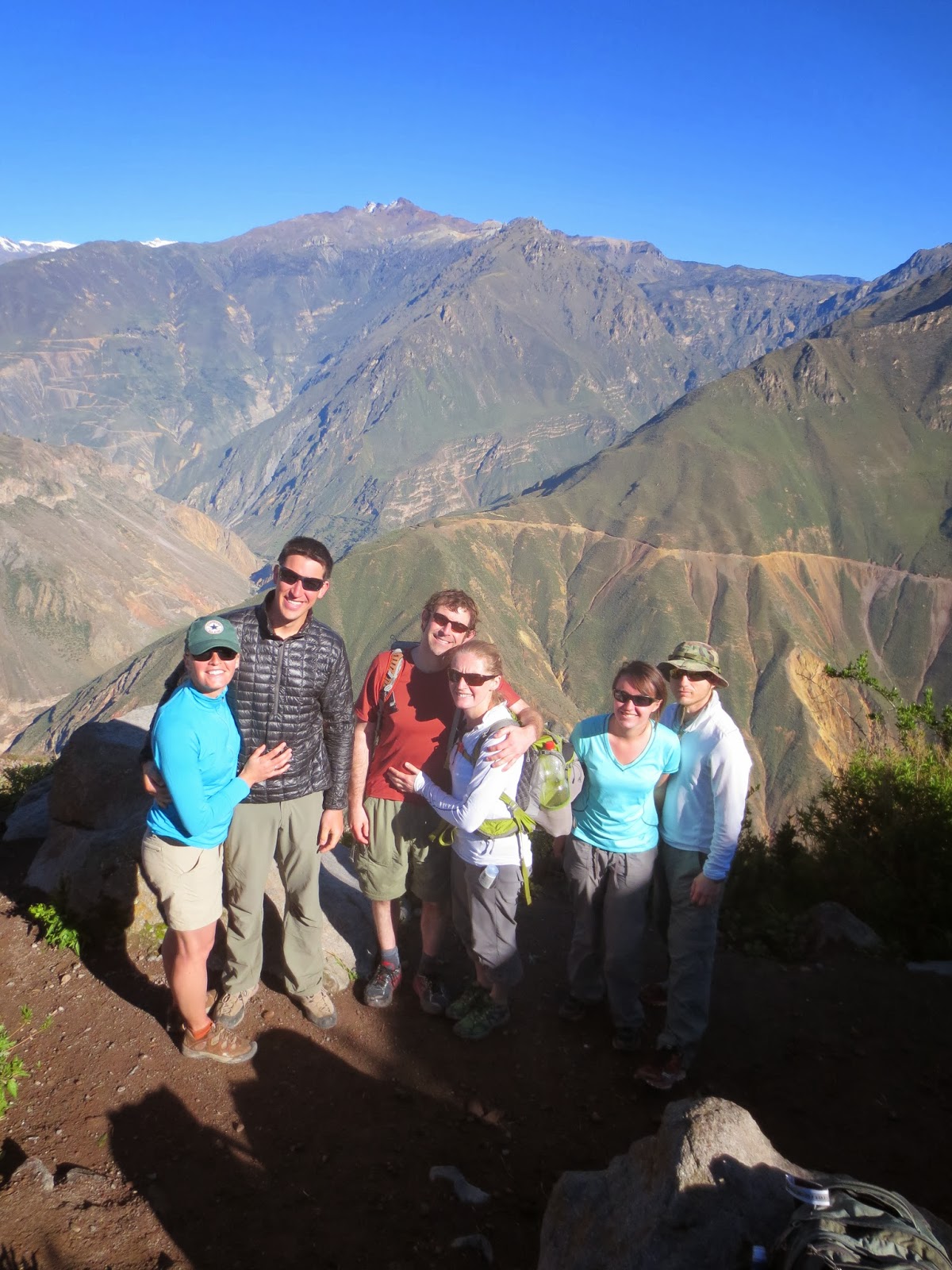