Amber:   After Machu Picchu, (and Tim proposing!!; what a perfect place to be proposed to by my best friend!  Of course I said yes, and gave him numerous kisses as an affirmation!) we all agreed that no Inca ruin would compare, (really, its so amazing, will any set of ruins ever?) so said farewell to the Sacred Valley and headed south to Lake Titicaca.  We had a short lay over in Cuzco before our night bus, and were caught in a surprise hail storm.  We were walking along the street one moment, and the next, huge rain drops began to fall.  Within moments, the rain had turned to heavy hail, and the wind had picked up. Dwight thankfully found that the entrance to our destination was literally a doorway away from where we were huddled beneath an awning.  The streets filled with hail, which must have stopped some of the street drains, as when the hail turned back to rain, the street filled with rivers of water and slush and almost spilled over onto the sidewalk.  It was quiet the show, complete with thunder and lightening! 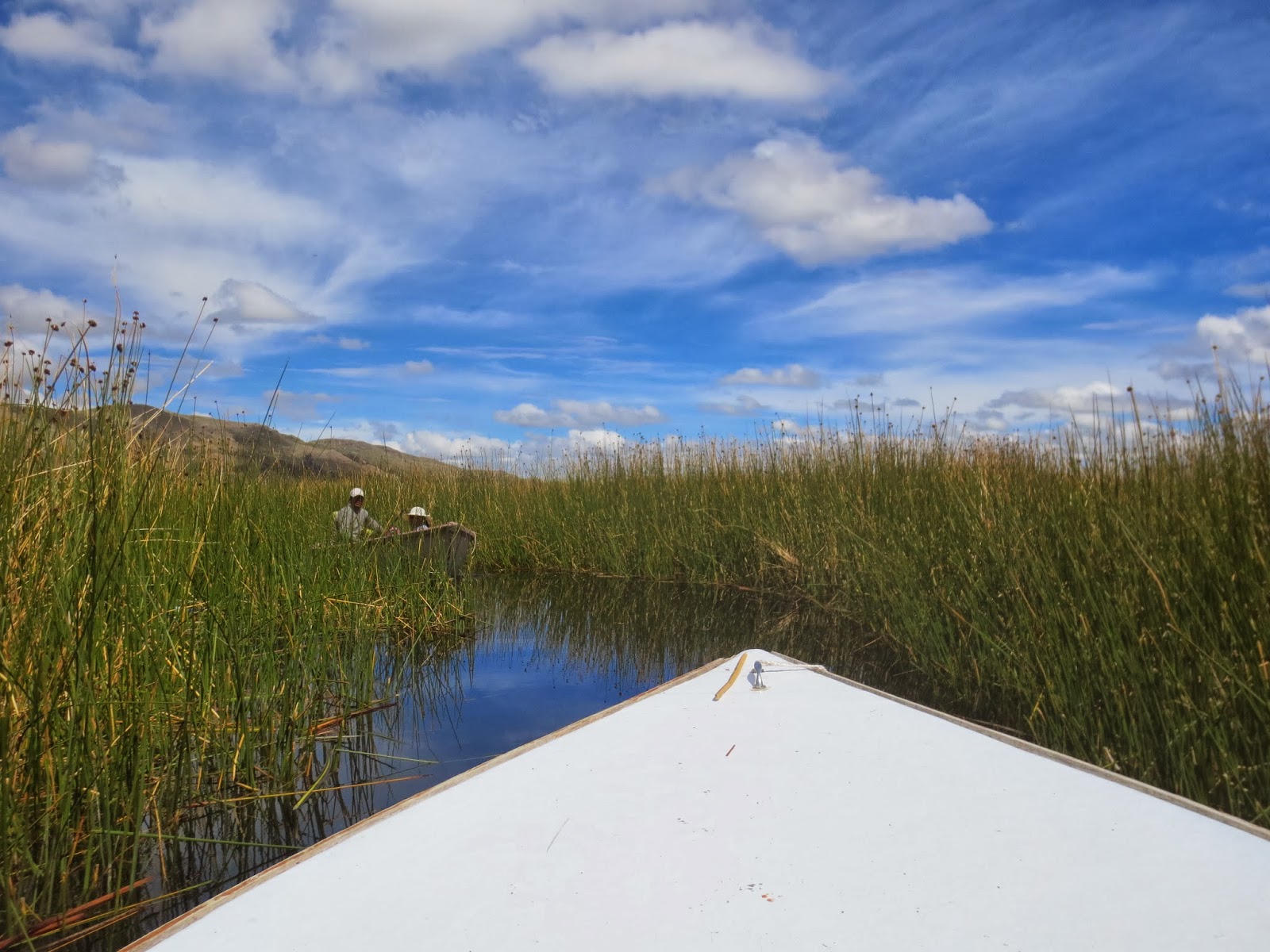 After a night bus to Puno, the small, dirty town on the edge of Lake Titicaca, we arrived with no real set plan. We wanted to see the highest navigable lake in the world, and the famous reed islands, and that's about all we knew. Within an hour, however, we booked a night stay on one of the Eros Islands for all six Alaskans. We thought it would be a more authentic view of how the local Eros people lived, as opposed to taking just a day tour and only stopping at the islands that sell their art work. 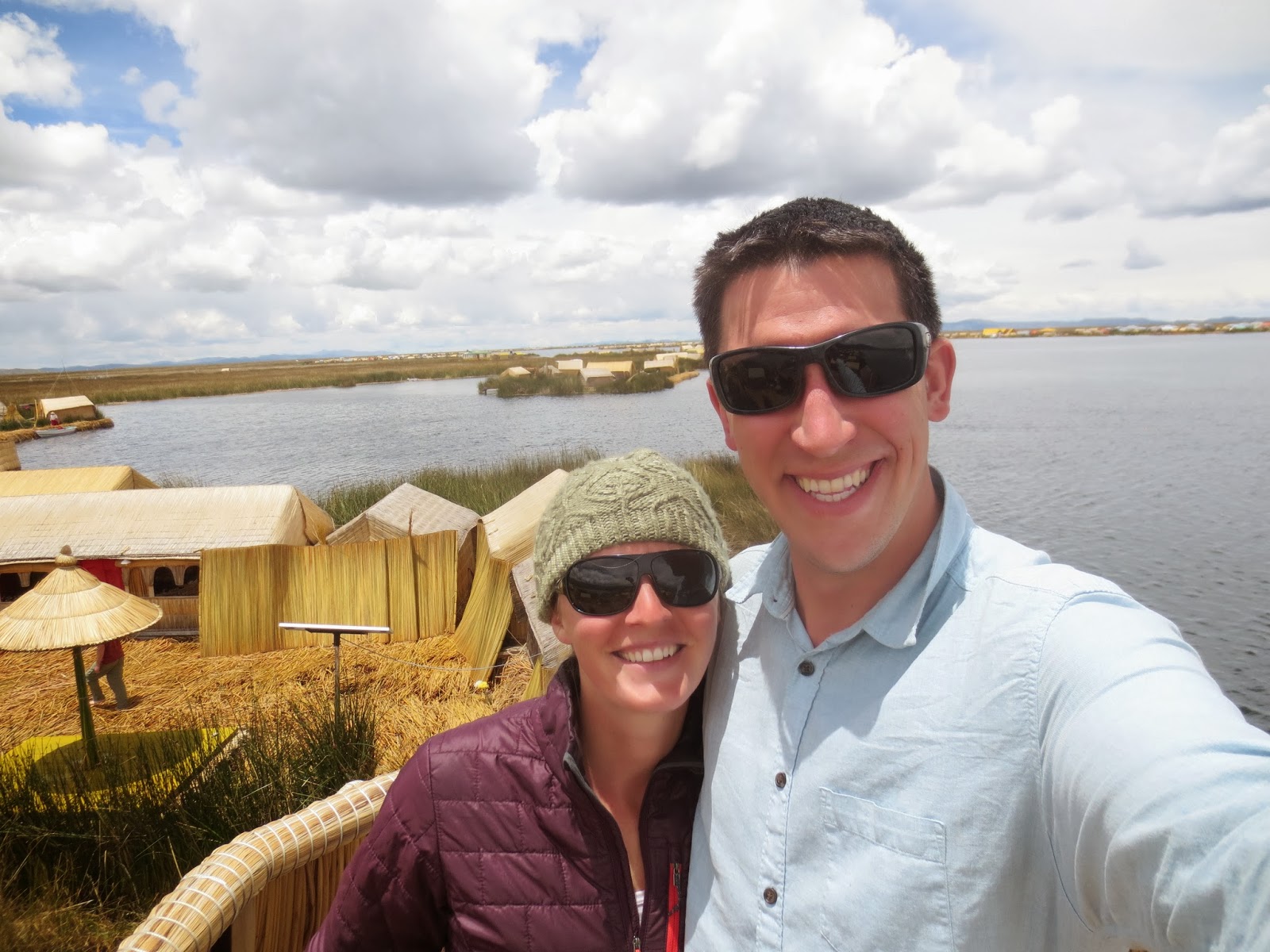 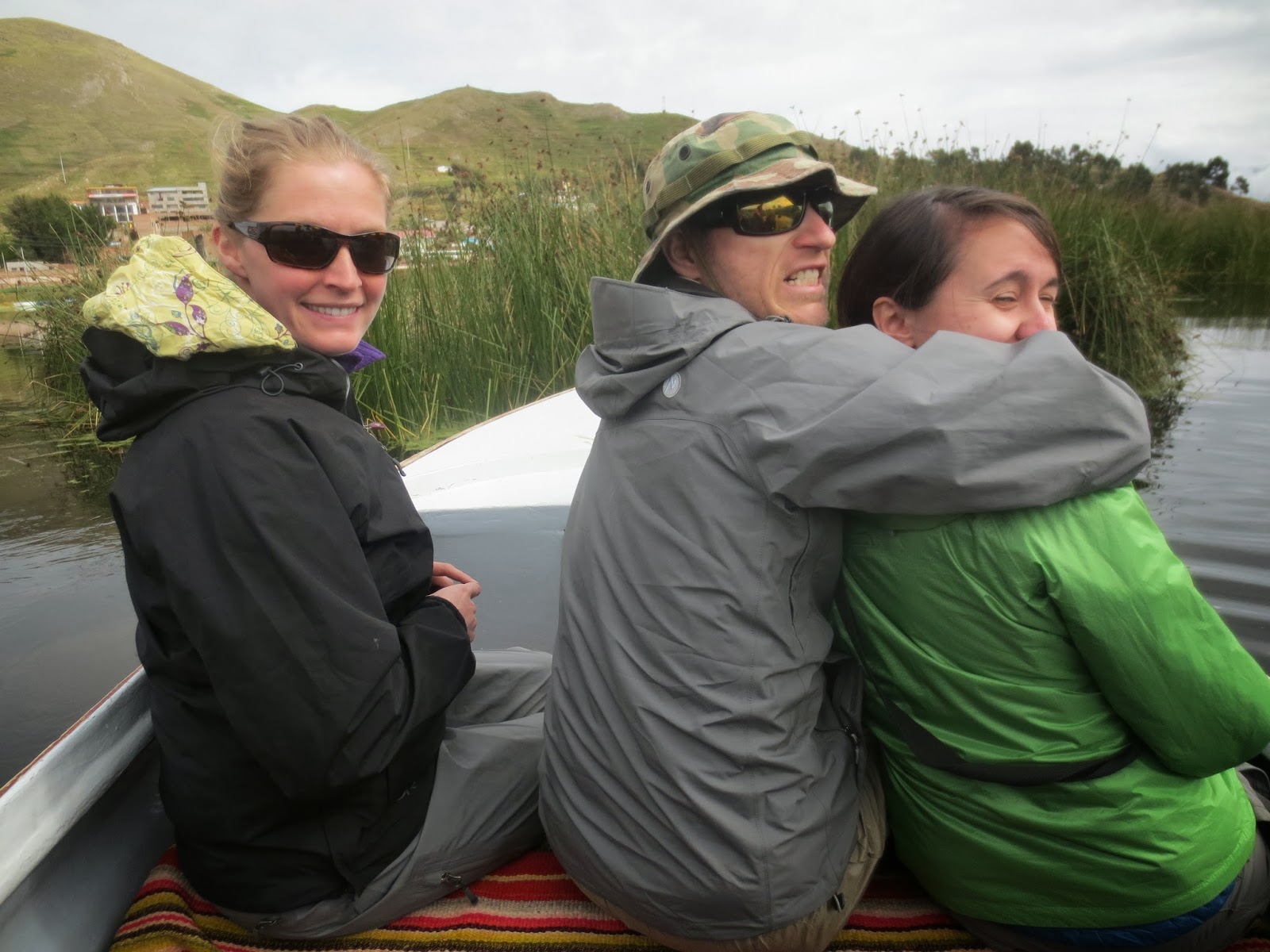 The Eros Islands are made completely from floating rafts of reeds.  Multiple times a year the locals harvest more reeds and lay them down on top of the old reeds. The original base of the islands are the reeds roots, cut from the lake bed much like sod, and sown together to make the desirable sized island.  (The island we stayed on was a couple hundred meters long, and probably twenty meters across). Then reeds are piled flat, in opposite directions to make a sturdy foundation, and while they are only about a meter high, are several meters deep.  The islands do float, so the locals anchor them to the lake floor.  Our host explained to us that if a big wind picked up, the reed island could drift across the lake to the shores of Bolivia. As they had no passports, it could present quite the problem! 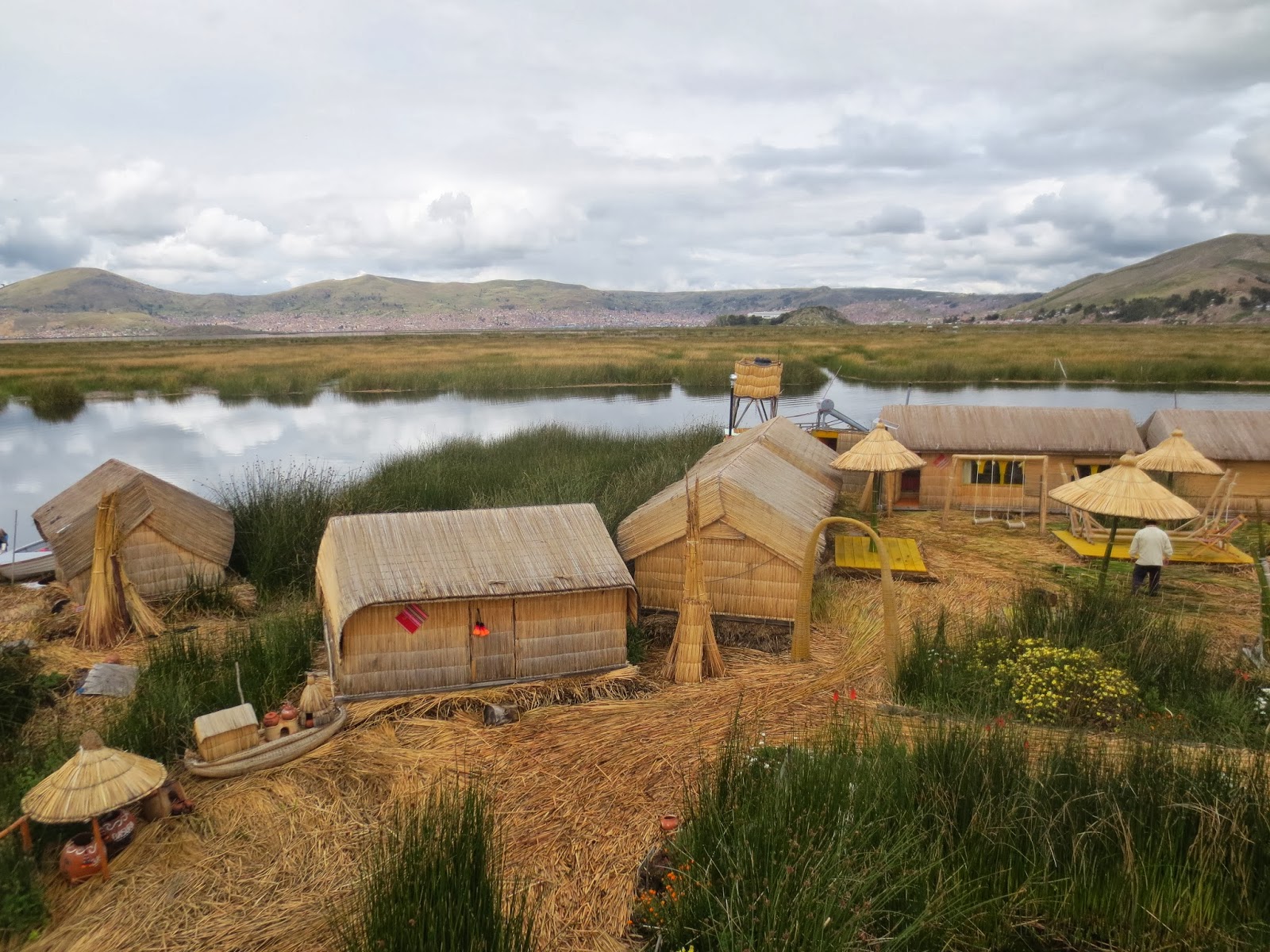 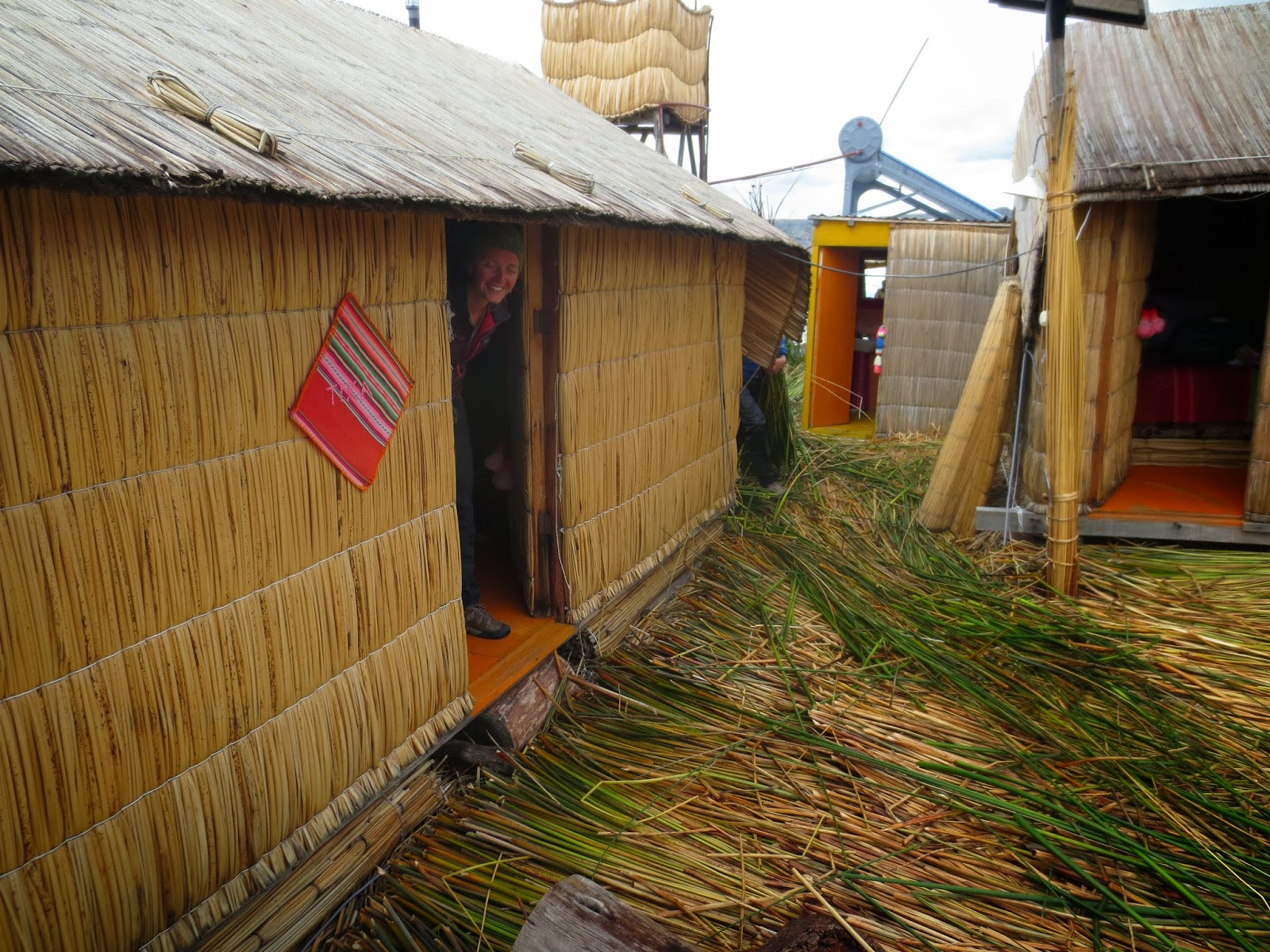 The reeds are actually very soft, so doesn't take long for them to decay, especially the ones exposed to the lake water.  They must be continually harvested and placed throughout the island.  All the time.  They pick up their houses, lay the reeds, put down their houses.  I though mowing my lawn was a lot of work. 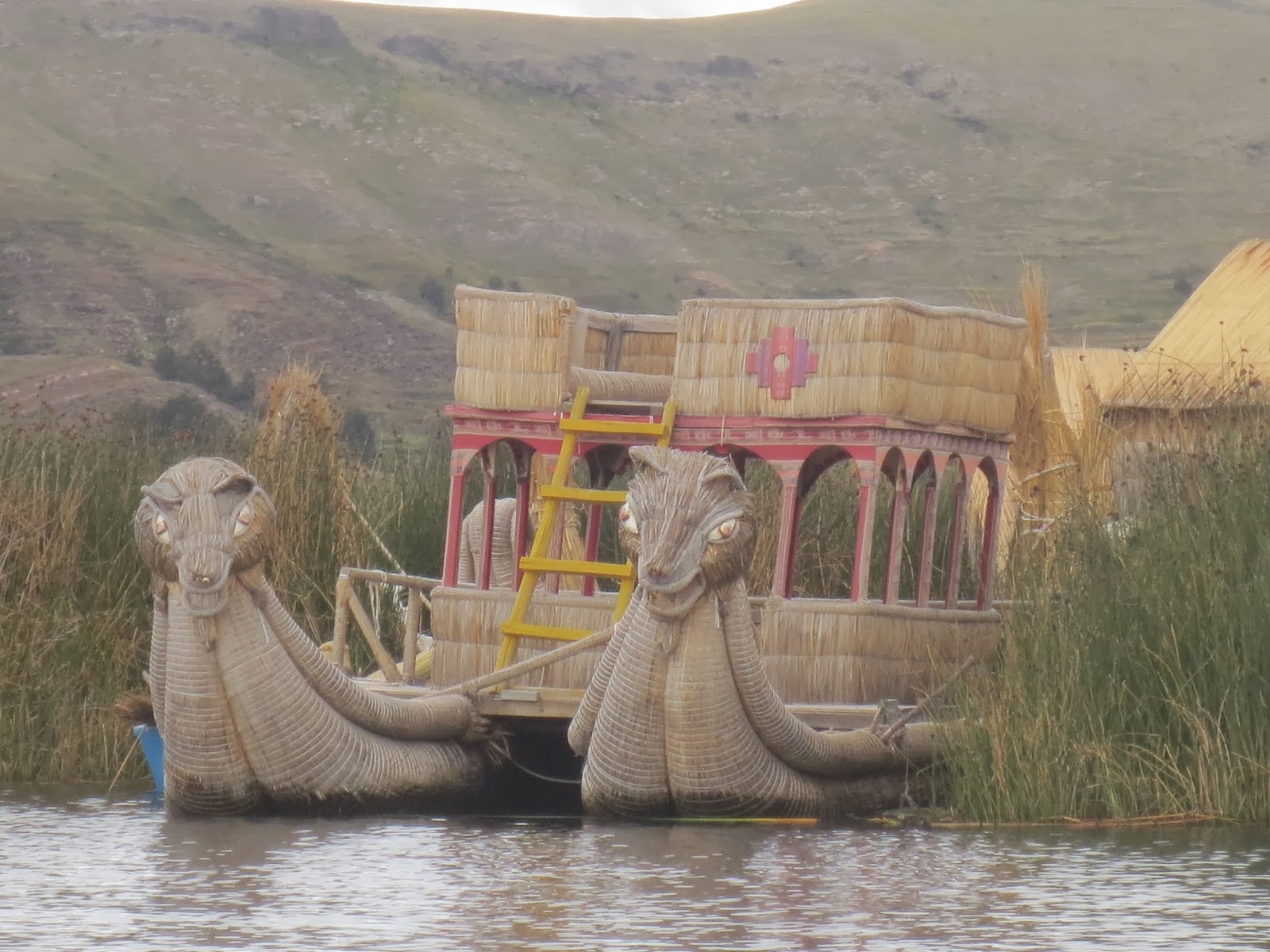 About three to four families live per 'island,' and everything is made of reeds.  Their houses, their boats, their yards.  Now, there are wooden frames to their homes, but those too are walled and roofed with reeds.  And we were picked up form Puno in a small fiberglass boat, complete with an engine. 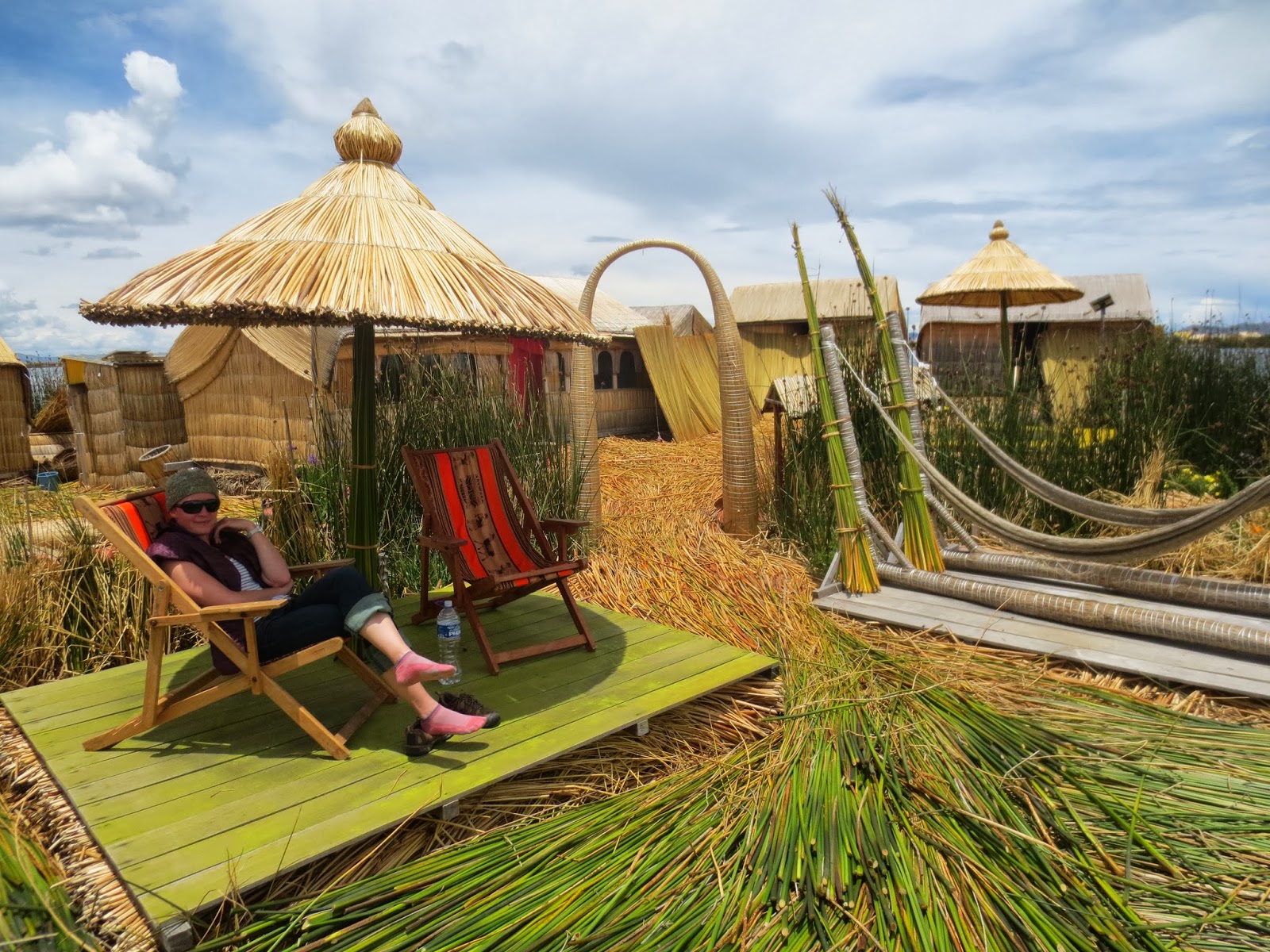 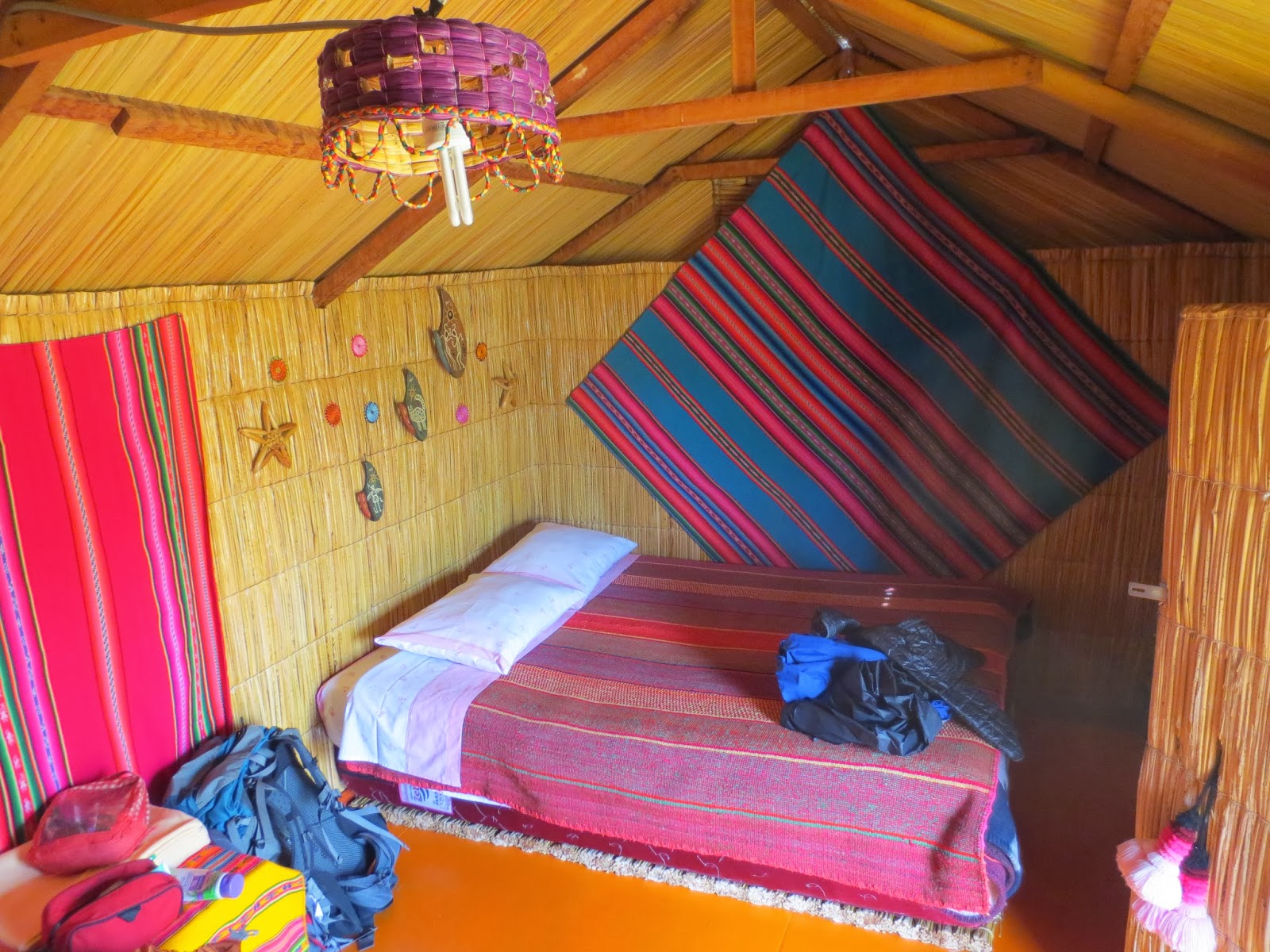 We weren't sure what to expect from our stay at Isla Khantati.  We had chosen it due to a small blip in Lonely Planet, and just as the book said, "Mama" Cristina was very charming!  The cabins were clean, complete with hot water bottles at the foot of your bed at night and a mountain of thick blankets, and the food was surprisingly delicious.  We were later told that Cristina has traveled throughout South America, Europe and the United States to learn about hospitality, food sanitation and preparation, and first aid.  There were even hot water showers (solar), and an eco toilet. We went on a little excision in a traditional reed catamaran to collect fish from a net, but I think my favorite was when we got to play dress up in the local cloths.  Eloise, Heather and I looked adorable!! 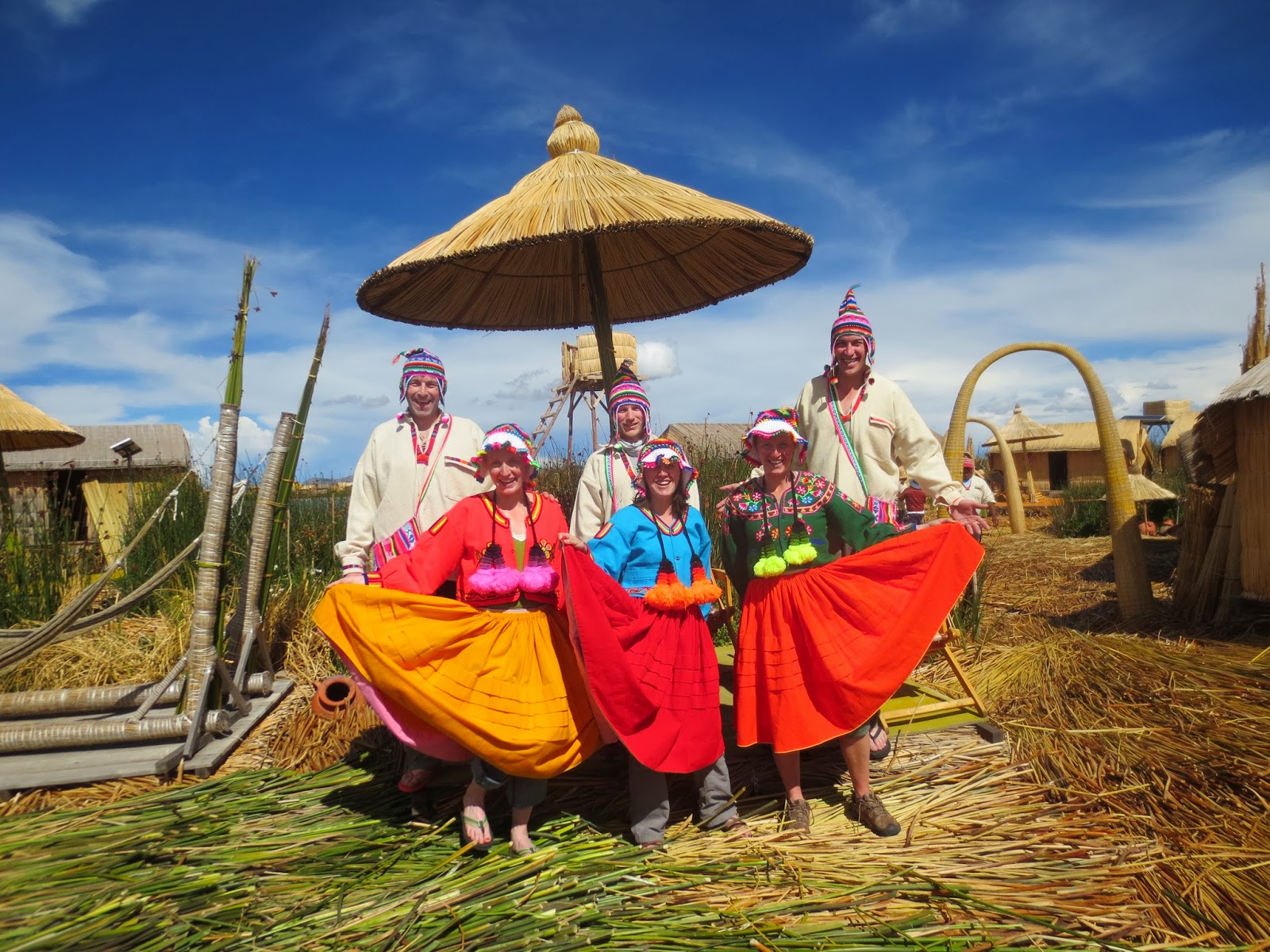 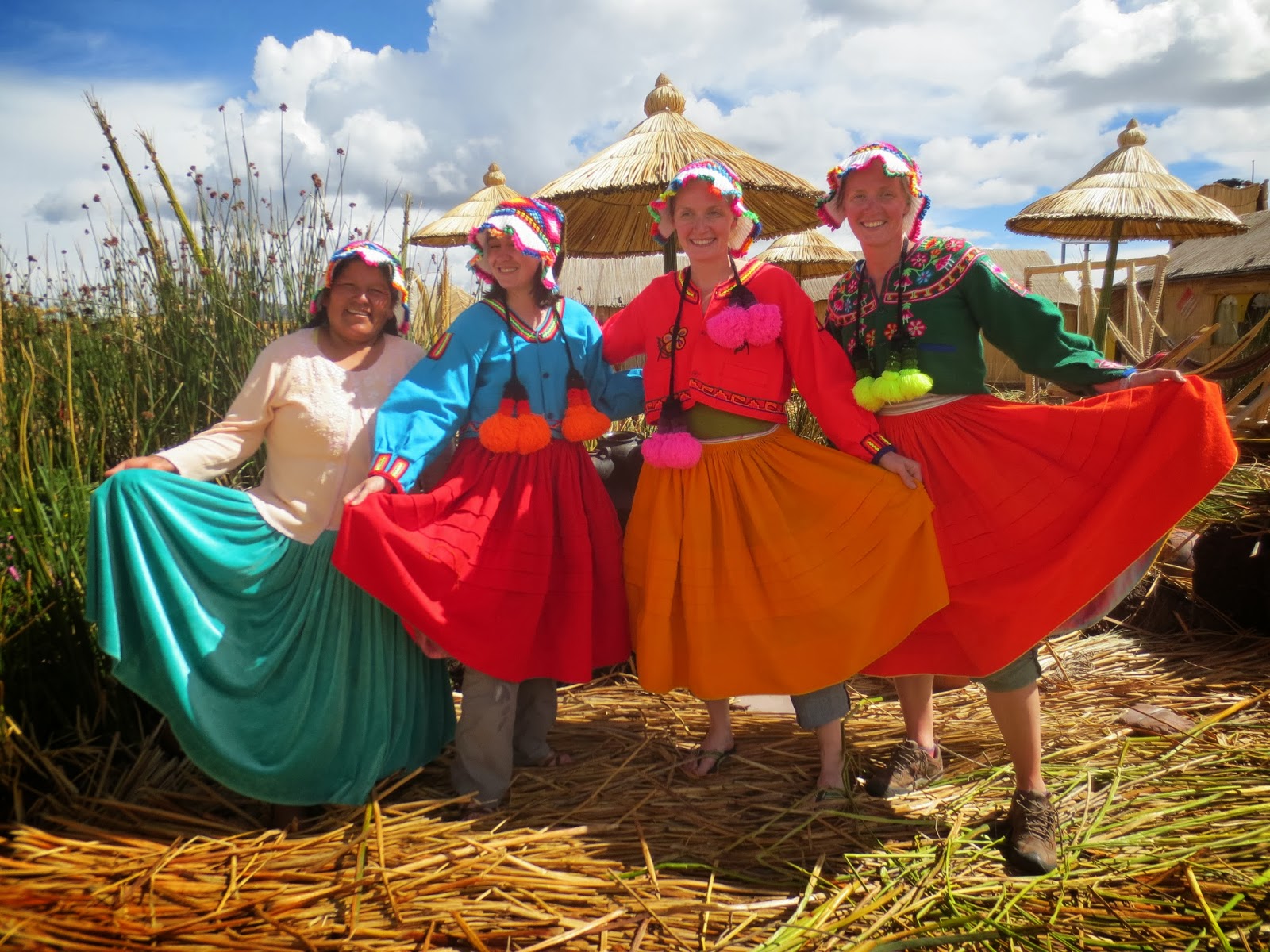 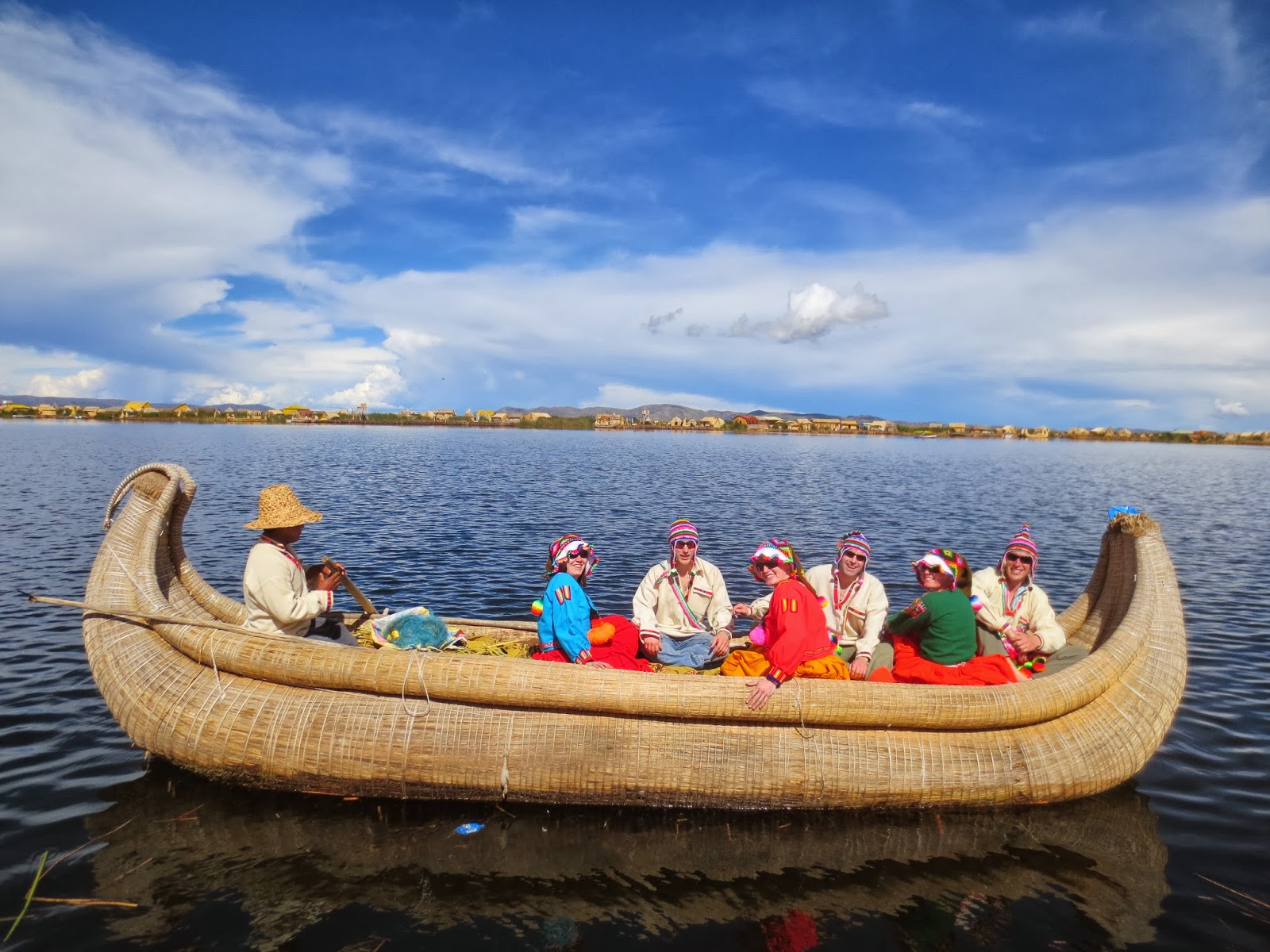 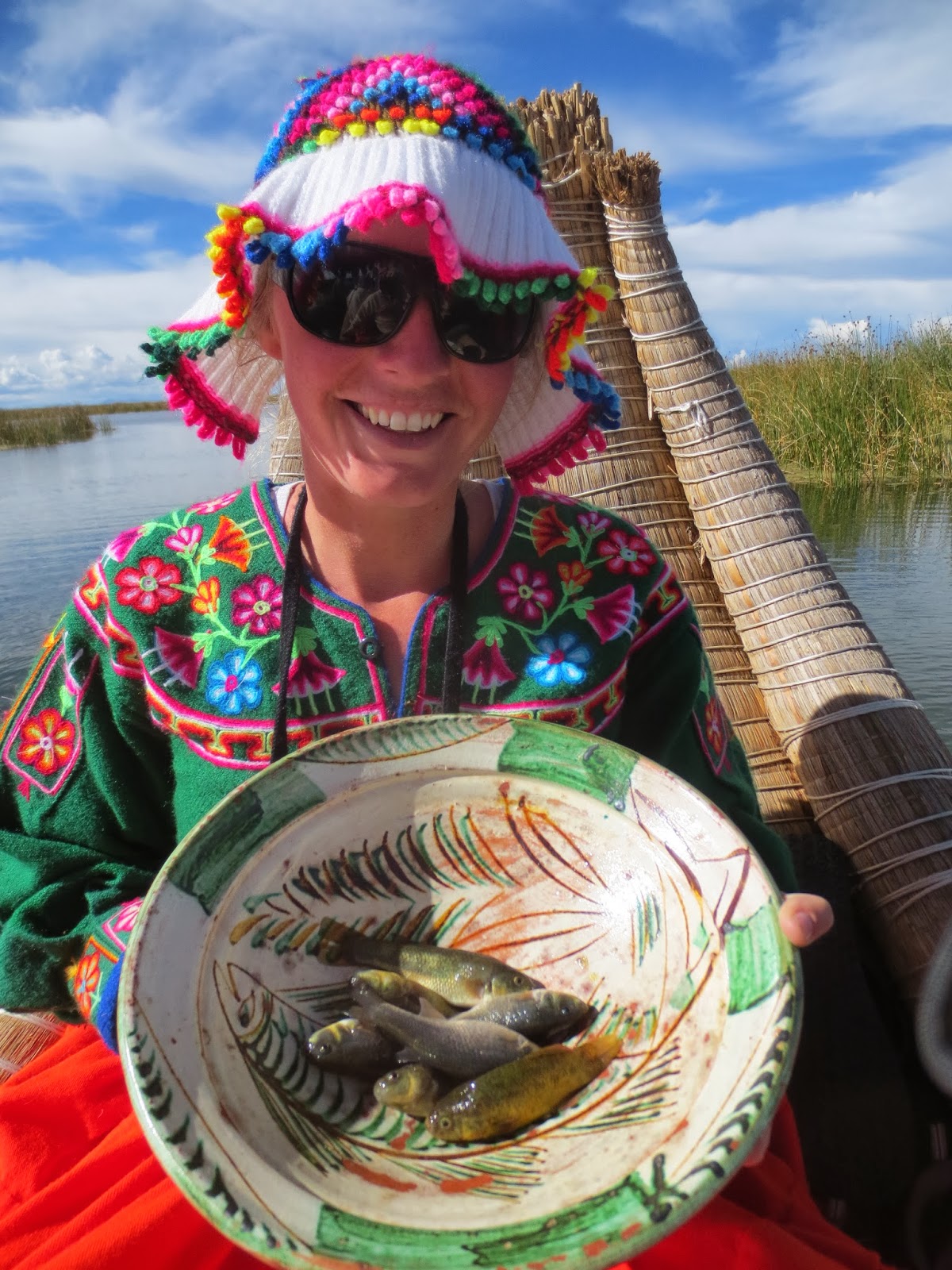 There was an adorable cat that loved to be held and pet that followed us around during our stay.  She would purr while we relaxed on our little patios or hammocks, scratching her ears or holding her in our laps.  When we had first arrived, our host had told us something, that was lost in translation, when Heather picked her up.  Because of his concern, we asked if it was okay that we hold the cat.  He seemed to shrug it off, and Jerami, Eloise, Heather, Dwight, Tim and I all enjoyed giving her attention.  And then....!  Heather came walking very calmly yet quickly over to Tim and I, asking where Mama Cristina was.  There was a tick firmly attached to Heather's belly!   She found Mama Cristina, and Mama Cristina calmly plucked the tick out with a pair of tweezers.  Poor Heather!!!  Happily, she didn't die of tick bite (ha ha), and the cat stopped getting picked up! 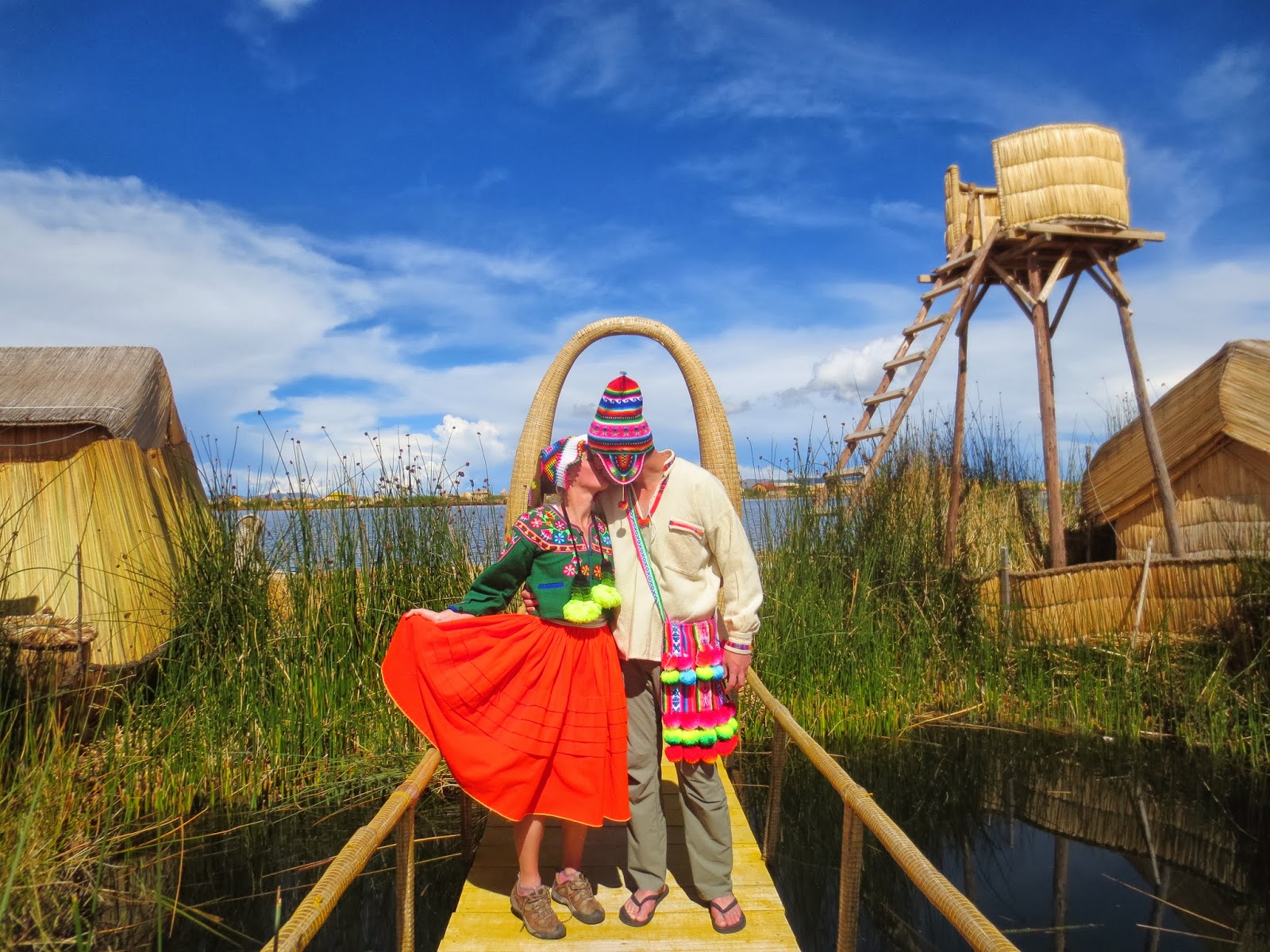