Amber: Peru has been amazing!  I have been so excited to come to South America, especially Peru. Ever since we were little kids, my sister Heather and I have dreamed about going to Machu Picchu.  It's the most visited ruin in South America, possibly the world, so we obviously aren't the only ones that share this dream.  During the high season, May through September, 2,500 people arrive daily.  Thankfully, January is the low season, so the masses would be far fewer.

When we arrived in Cuzco, we booked the train from Ollantaytambo to Auguas Calientes as well as our ticket to Machu Picchu and up the dramatic peak Wayna Picchu.  Only 400 tickets are sold daily to Wayna Picchu.  200 people climb up at seven am, and another 200 at ten am. To summit Wayna Picchu, it is a very steep, narrow set of stone stairs up and down, so only so many fit at one time.  We opted for the second time slot as we wanted time to get the classic post card view; a dramatic sunrise pictures from the Guard Tower that over looks Machu Picchu, Wayna Picchu dramatically poised behind the ruins. 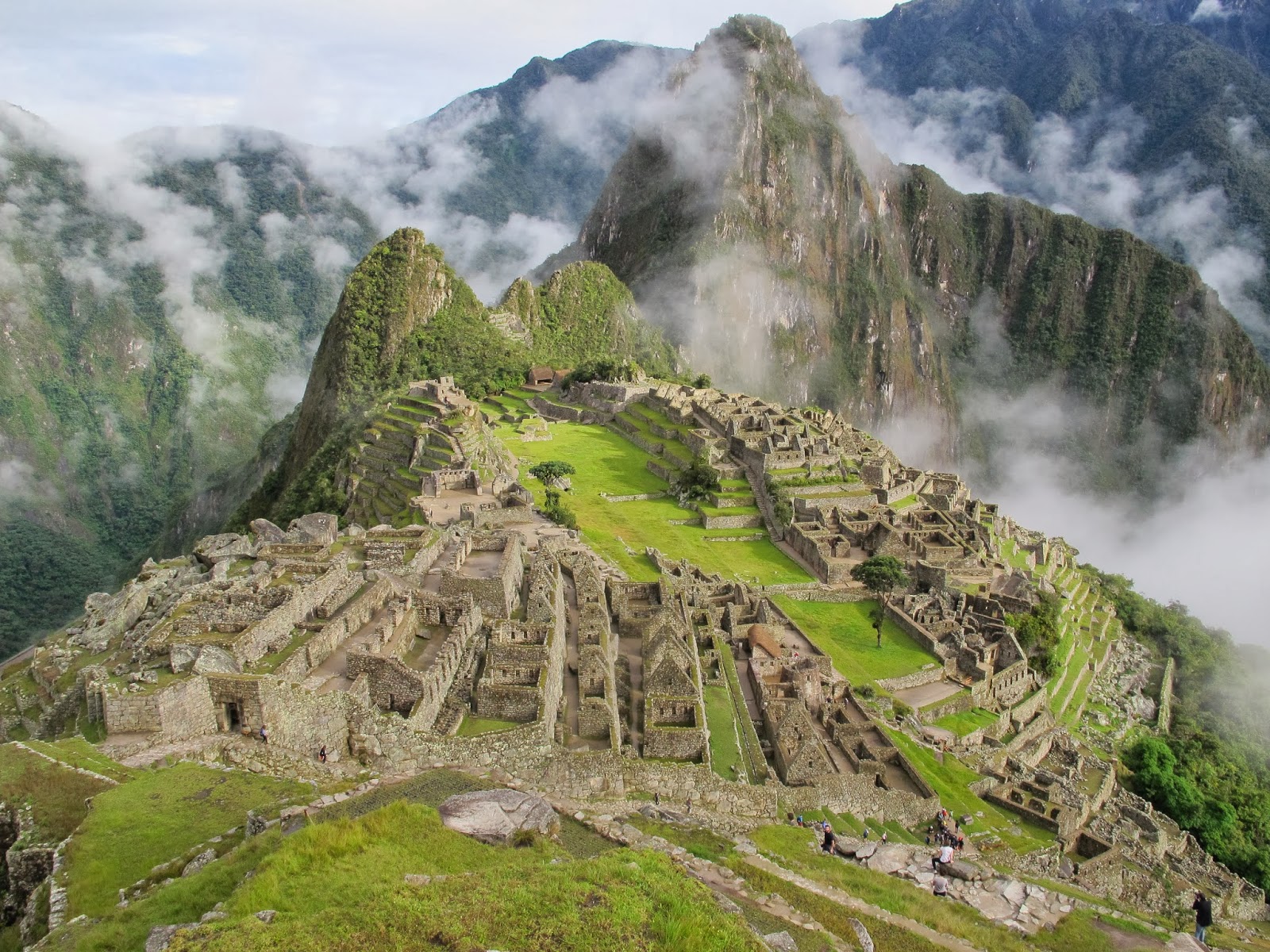 As we booked our tickets, we were told that due to high rains, a large land slide had totaled the road going up.  Not just covered the trail, but taken out a chunk of the road.  The only way to reach Machu Picchu was to climb an hour and a half straight up through the jungle.  Being as we had opted to not actually hike the Inca Trail, I was already voting for the short climb.  I was rather horrified as an American couple in their late 40-early 50's stood in line at the ticket counter and after much debate opted to not see Machu Picchu due to the bus not being available.  They appeared to be in decent shape.  Hike slow!  Had they not flown all the way to Peru to see Machu Picchu?  Heather, Dwight, Tim and I were pretty sure it was a decision that they would regret for the rest of their lives.

There are six of us Alaskans traveling in Peru together. Due to the Machu Picchu web sight having a glitch that we couldn't seem to work out, Tim, Heather, Dwight and I were unable to book our tickets to Machu Picchu while in Alaska.  During the high season, we would have arrived in Cuzco and been completely out of luck.  Thankfully, there were still many tickets available for Machu Picchu as it was rainy January, but Wayna Picchu was sold out for the day our friends Jerami and Eloise had miraculously been able to book while still in Alaska.  In addition, while trying to book the tickets while we were in Cuzco, we had received a text from Jerami saying that their flight form Alaska had been delayed, so they weren't sure when they would actually be reaching Cuzco.  Tim, Heather, Dwight and I opted to book a day later and make the climb up Wayna PIcchu.

The train ride from Ollantaytambo to Aguas Calentes was beautiful!  The sun shone as we followed the river Rio Urubamba as it wound through the jungle, past Inca ruins, and under steep, dramatically high mountains.  It was definitely a good idea to do during the daylight hours.  It was breath taking.

After a restless night sleep in a small, noisy hostel in Aguas Calentes, it was time to climb Machu Picchu!  We got up at 4:30am.  Stepping out of our room, I could hear rain.  Heavy rain!  It was pouring out!  We dressed in shorts, water proof hiking shoes, and capline tees, under our rain coats.  Fingers crossed that the sun would break through the clouds, we had a hurried breakfast of bread and jam, and stepped outside. 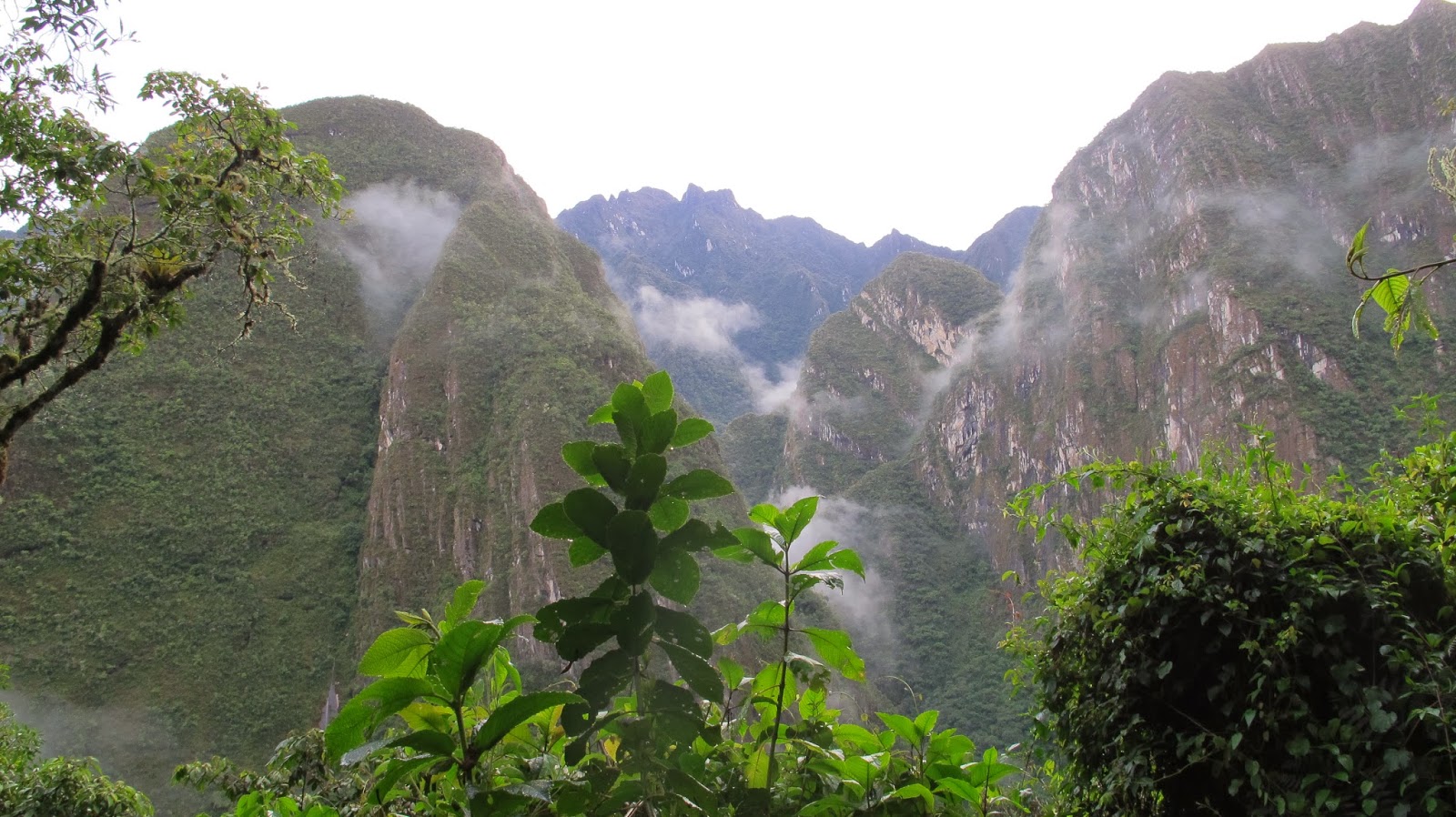 The rain had cleared to a light drizzle.  It was warm.  We hiked through the small town of Aguas Calentes and up we went.  It was a steep, hard climb.  We were still not used to the altitude and it was hard to catch your breath in the humid, steep jungle.  Finally, after about an hour and a half of huffing and puffing, we reached the top and were able to go through security, Heather pulled her huge Nikon camera out of her back pack, and we were at the ruins!  We found the trail to the Guard House, and waited for the sun to brighten the ruins.  It was beautiful without the sun, but boy did it just pop when the sun came out!  If I could have picked in my head the picture of Machu Picchu that I wanted, it would have been the one I got (see the first photo in the post).  Wayna Picchu shrouded in mist, Machu Picchu in bright sunrise lighting.  My trip to Machu Picchu was complete, the rest was all bonus as far as I was concerned.  And boy did  I get a surprise bonus!! 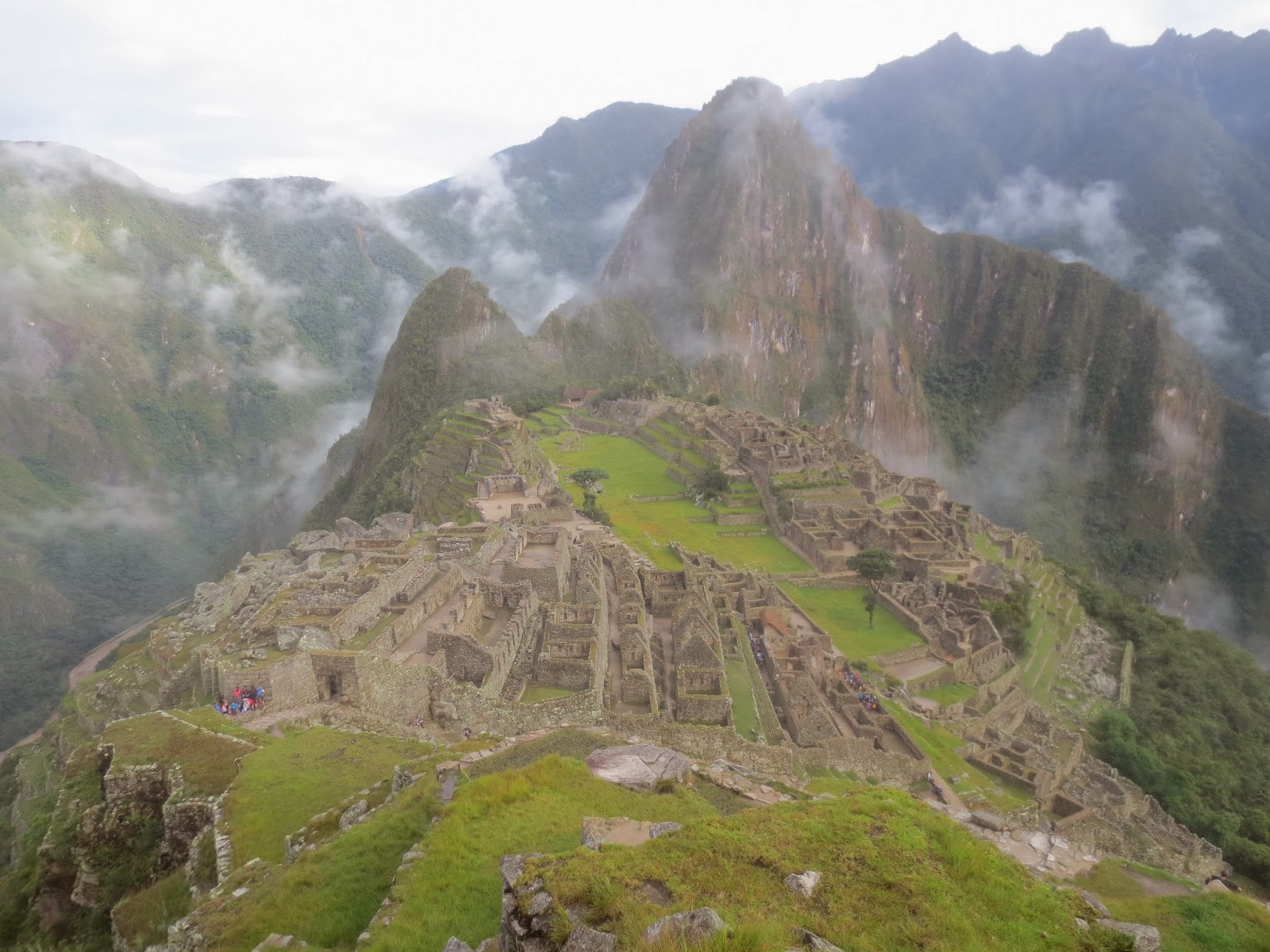 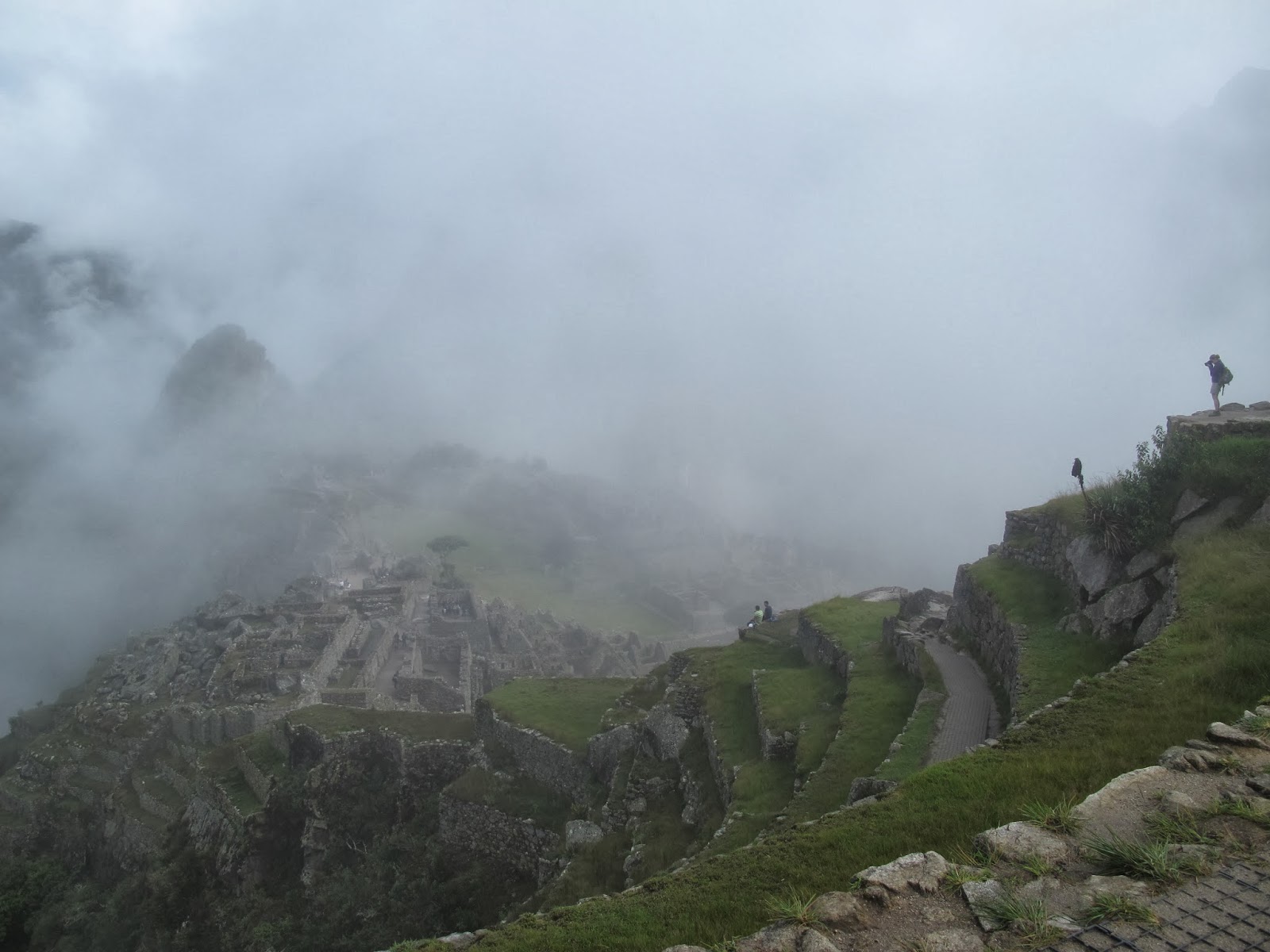 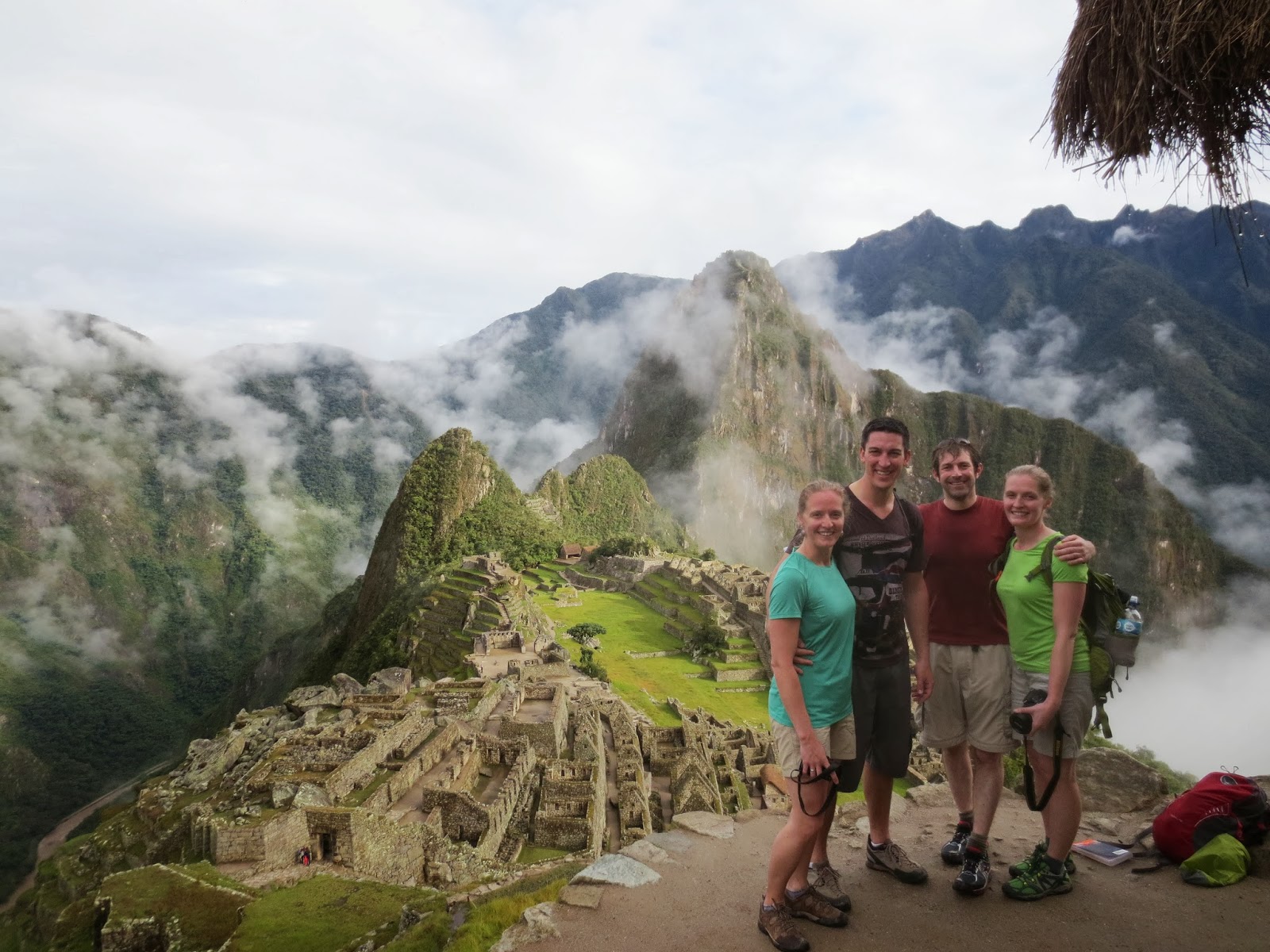 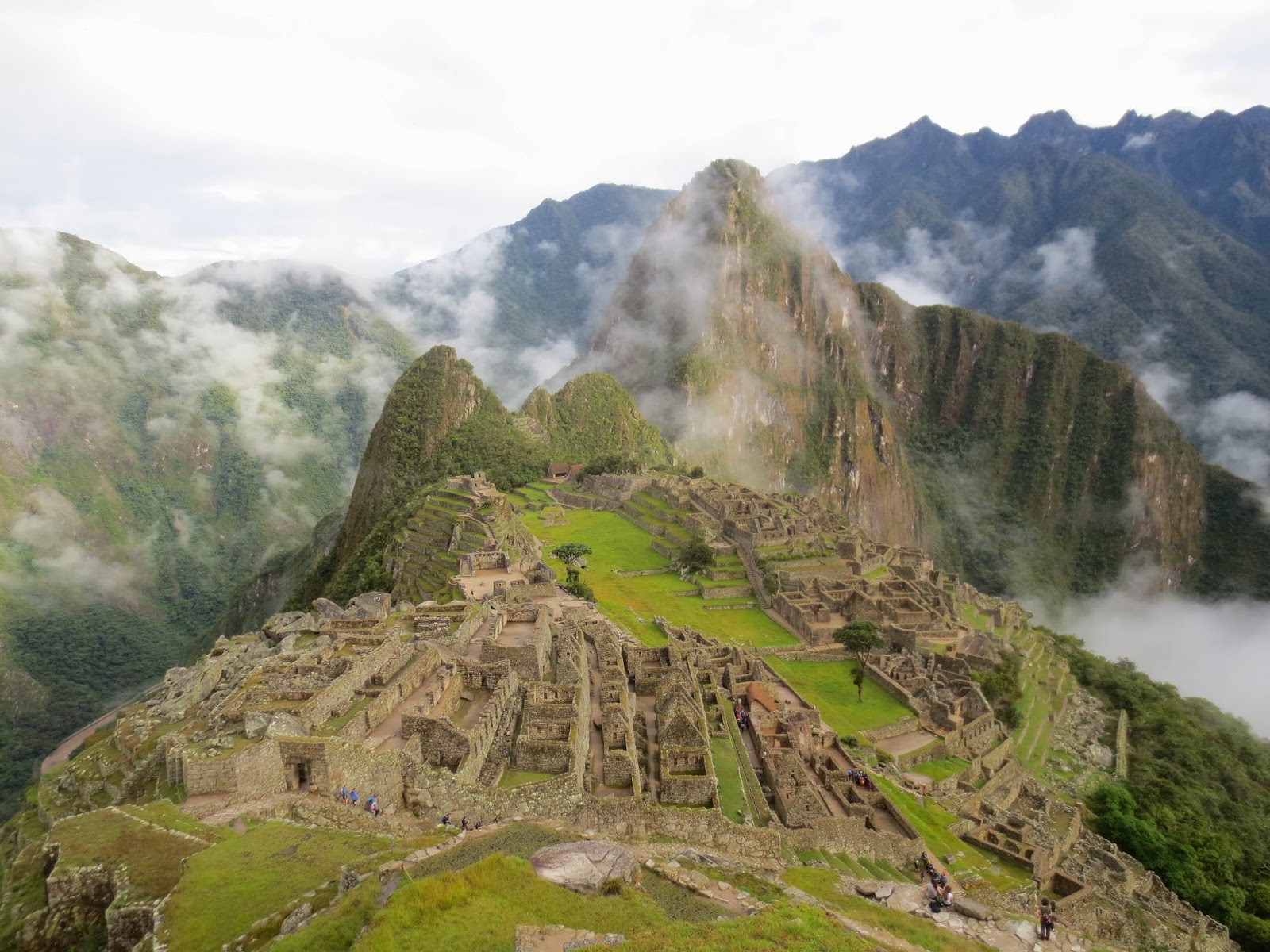