21 Hours Later: We Made it to Lima, Peru

Amber and I had just 25 hours in Anchorage after returning from our climbing trip to Joshua Tree before getting back on a plane bound for Lima, Peru. Our routing took us from Anchorage to Denver to Toronto, Canada, and finally Lima. The Toronto to Lima section was obviously the longest leg, about an eight hour flight. Traveling long hours is never particularly fun, but it manageable.

We arrived in Lima at 1:30 AM. We had already arranged for our Guesthouse to send a car to pick us up. We found our driver holding a sign with our name on it in the arrivals area. A 25 minute ride and we reached our Guest House in the Miraflores District. The streets were surprisingly deserted at 2:00 AM considering Lima is a city of more than eight million people.

We slept in till 9:30 the next morning; had the simple complimentary breakfast provided by our guest house. Our guest house called Open Guesthouse was $26 USD per night with a shared bathroom located adjacent to our room.

For the day we opted to take the advice of our guidebook and do a walking tour of the historical area of downtown Lima. We negotiated for a taxi to the origin of our walking tour. We visited several Catholic churches including the Iglesia de la Merced and La Catedral de Lima. The highlight of the walking tour was our visit to the Monasterio de San Francisco. The Monastery had bone filled catacombs that are estimated to hold more than 25,000 bodies. The area had been excavated a archaeologists had piled the skulls and other large bones in orderly piles. Kind of an eerie experience. Sorry they would not allow any photos. 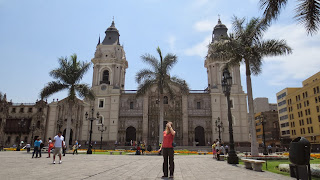 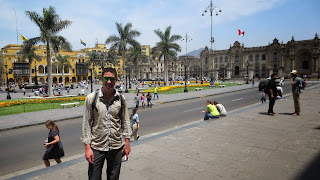 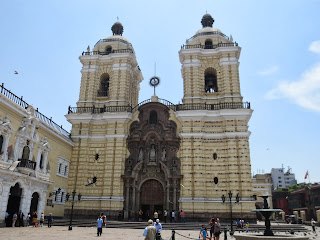 We waited for almost an hour in the blazing sun for the changing of the guard at the Palacio de Gobierno (Presidential Palace) along the Plaza de Armas. The event was suppose to happen at noon, but it look like something else was going on as there was a large group of people standing in front of the palace with police everywhere. The police had shut down the entire Plaza de Armas to vehicle traffic. After acquiring sunburn from to long in the sun we continued our walking tour without seeing the changing of the guard. 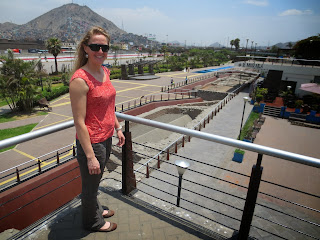 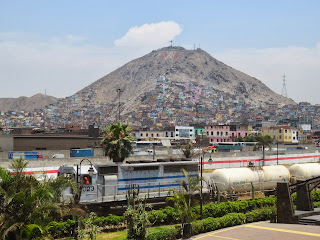 Our taxi ride back to our guest house in the late afternoon took a while as traffic was gridlocked. Also our taxi driver did not know where our guest house was even though we were able to provide an address and a map with the location of our guest house pointed out. We eventually made it back and took a nap to help us get of the jet lag. After waking up at 8:30 PM we prepared to head out to find some dinner when Heather (Amber's sister) and Dwight (Heather's boyfriend) walked in having just returned from a two day tour of the Nazca Lines and other site near Lima. The four of us are set to meet up with our friends Jerami and Eloise once we reach Cusco.
'
Posted by Unknown at 5:20 AM