Amber:  We arrived in Melaka midday after a short two hour bus ride from KL.  The main bus station was a few kilometers from the center of town, so we went in search of bus 17.  For 1 ringit, we were able to squeeze onto the local bus along with a mix of locals and backpackers.  It was so full that there ended up being standing room only for a lot of the passengers, but we were able to stack our backpacks onto Tim's lap and sweat out the ride sitting.

We wound our way through town and finally got out at the center of town.  Melaka is a charming little town that is considered a Heritage sight for Malaysia.  Centered on a river that eventually leads into the ocean, the old buildings are fairly well maintained.  Mosques, temples, shops catering towards tourists, and guest houses line the narrow brick streets.  Tim and I  crossed the river into budget Chinatown and were able to find a cozy guest house after looking at a few options.  Clean white sheets and blankets were provided as well as towels.  The bathrooms were shared, and the wifi only worked in the lobby, but the room was nice, and the guest house was clean.  We decided to celebrate and took a nice long nap.

Once the heat of the day had passed, we got up and went in search of food.  We found the weekend market and sampled some of the local fair.  We had popiah, basically spring rolls on steroids, both fried and fresh.  The fried kind was good. The fresh ones had a slight fish flavor that I was not too crazy about, perhaps from the pickled turnip in them.  I donated most of my fresh one to Tim as he liked it.  We had been greedy when we had seen the tasty looking popiah and ordered four of them, and they were filling!  After eating those as well as a few pastries stuffed with sweet pork, we ended our meal with cendol.  Tim is convinced he could make a killing at the Palmer State Fair with this flavored shaved ice Malaysian delicacy.  It was simple yet very tasty and refreshing.  We shared a peanut butter flavored one and it was pretty darn good.

Tim:  The next morning we woke up at 6:00 am to the sounds of Muslim chanting from the Mosque across the street from our guest house. At 7:00 in the morning the drumming started from what was apparently a parade down our street that included cows. We found their cow pies on the sidewalk later. On our first full day in Melaka we ventured out for breakfast at the cafe where breakfast was included as part of our guesthouse stay. The food was not very good. Amber stayed in the room for a while, and I visited the museum that is housed in the original Dutch administration building constructed in the 1600s. It was a hot day, Amber and I walked around in search of dinner. We ate fried chicken for a snack from a hawker stall then settled on Indian Banana leaf food.

Amber:  The Banana Leaf food was very tasty but they served it with no utensils.  Tim especially was a little taken back by the concept of simply digging in with our hands.  The food was brought out in serving dishes, but then plopped onto a banana leaf that was placed on the table upon our arrival.  Very traditional but   it was a little like reverting back to childhood!  We had ordered nhan, mutton, and tandoori chicken.  It was all very good, but we had not seen the hand washing sink upon arriving.  We did our best using little crackers they had given us to scoop the food, but finally, after spotting the sink, felt better about just digging in.  I had read that to use the left hand was improper due to the way people use the toilet over here... but the other guests seemed to be digging in with both.  You can't believe everything you read! 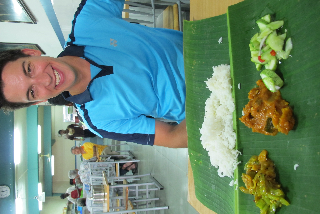 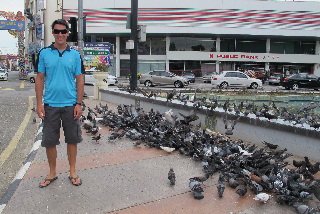 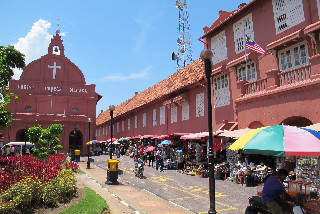 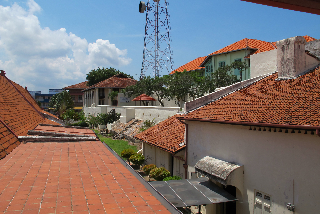 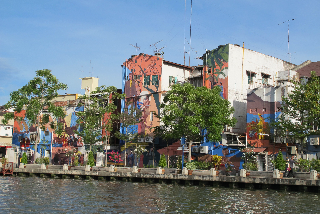 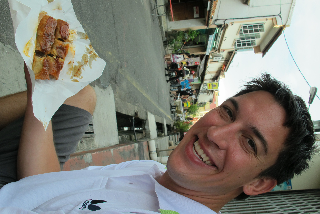 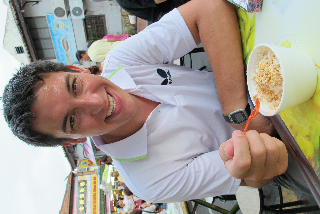 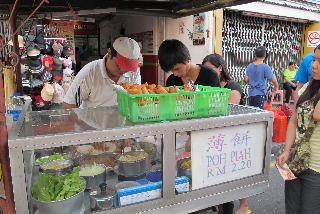 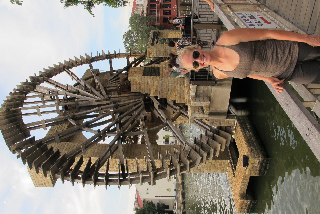 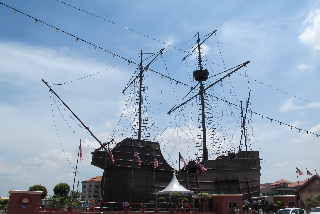 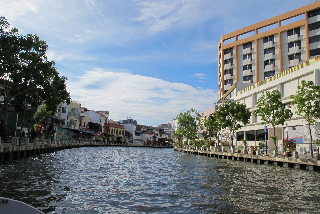