Tim:  The afternoon that we completed the climb and had reached the base of the mountain, we planned our onward travel to Sandakan. Sandakan is the largest city near Sepilok the Orangutan Rehabilitation Center. The bus ride took about four and a half hours. We arrived in the early evening, but it was already dark. We were exhausted having woke up at 2:00 am that morning for the summit climb. After an Indian dinner of fried chicken and roti we went to bed. The next day we switched hotels because we found a much nicer place for less money down the road. We caught a 2:00 bus to Sepilok. The bus ride took about 45 minutes to make the 25 kilometers. We arrived at the Orangutan Rehabilitation Center just a few minutes before three o'clock when the afternoon scheduled feeding time was to occur. A few minute walk down a boardwalk through the jungle brought us to a large wooden platform that served as a viewing area. There were elevated platforms 15 meters away for the orangutans. There were only four orangutans that came to the feeding. They are amazing creatures, with long dangling arms. We we were able to take some great pictures. After 45 minutes of feeding time the orangutans made there way back into the deep jungle and we grabbed the four o'clock bus back to Sandakan.

Amber:  Climbing Mt Kinabalu was an amazing experience.  We were exhausted as we finished our climb.  I only had a few blisters from my available choices in foot ware; chacos and my 'barefoot' shoes.  I think I'm pretty lucky considering how high we climbed! The clouds had set around the mountain top as we hiked down.  It was full on pouring out when we hiked down to the main road and waited for a bus to drive by, heading to Sandakan.  Tim had shipped his rain pants back to Juneau when we were in Laos, so I was the only one with a full set of rain gear.  Tim nominated me to go out and flag down the bus, he stayed under the awning and watched our gear.  It wasn't too long in the rain before a bus heading to Sandakan stopped when it saw me flailing my arms at it.  All the passengers on the bus wearily watched as Tim and I looked for a seat. We both looked like drowned rats and were dripping water as we walked the length of the bus.  Finally, someone moved to sit with his buddy and we got to sit together and not get anyone else wet.  Tim was so tired from our lack of sleep the night prior, he fell asleep almost instantly.  The purser kept walking by and laughing at him, all sprawled out and sleeping in the back of the bus!

We were happy our activity in Sandakan was one with minimum exercise.  We could move, but not that well!  Stairs were extremely difficult, so used handicap ramps whenever possible.  The Orangutan sanctuary was fun.  They are so amazing.  We saw only three or four, but it was fun to watch the orangutans come out of the jungle, drink some water, swing along the vines and ropes set up for them, and stuff their faces with bananas.  One filled her mouth so full of bananas that she had to hold a finger to her bulging lips as she chewed so she didn't spew the bananas out.  After the feeding, they swung up into a big tree and we watched as one collected leaves.  Maybe to make a nest.  Tim took several pictures, and just as he handed the camera back to me, the closest orangutan swung down the tree right next to us!  She walked along the railing a ways and curiously watched one of the staff before meandering down the boardwalk and back into the jungle.  I was so shocked she was so close (withing grasp) that I failed to get any pictures as she was right next to us.  Next time! 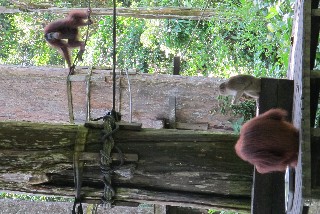 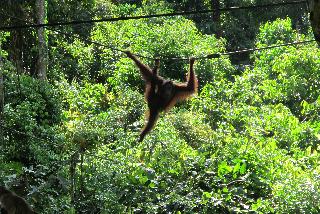 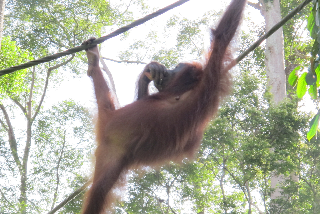 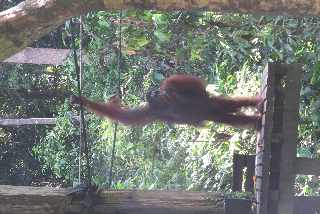 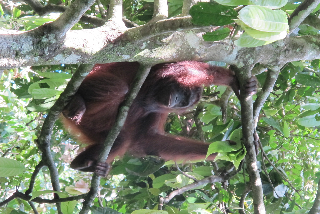 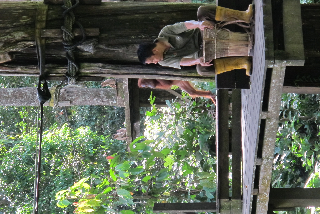 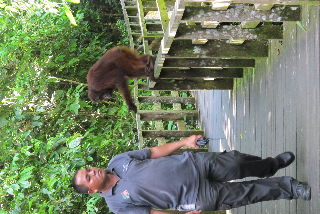