Tim:  The drive from Florence to Venice was mostly uneventful. We did take a small detour, accidentally, but that seems to happen on almost every drive that we do. Three and a half hours is how long it took us to arrive at our camp ground called Camping Rialto on the mainland near the bridge that crosses over into Venice. We arrived around one PM and opted to relax at the campground and do our first load of laundry since our travels had begun. We also had time to catch up on the internet as it had been a few days since we had had access to WiFi. There was a local supermarket walking distance from the campground that we visited for lunch and dinner.
Italians have a different idea of camping that we do in the USA. Our camping accommodation included a  single room small cedar cabin about 8x10 feet, with two small beds with white linens, pillows, and blankets. We had to walk 50 meters to the communal bathrooms. There was other accommodation available that included wall tents that also had beds inside.
Staying inside of Venice is very expensive with hotels averaging around 200 Euro per night. We paid 15 Euro for the cabin and another 4 Euro per night for parking the car. There is a parking garage at the end of the bridge that leads into Venice and we heard from a local that it costs 25 Euro per day to park the car.
Venice is beautiful, but also crowed with tourists. The walkways between building are very narrow, and the mass of tourist often makes it difficult to walk down the street. Our first morning in Venice we checked out the historical church, Basilica Saint Maria Gloriosa Dei Frari. It was very pretty. We decided on using the audio guide for an extra two euro. Next we visited San Marco Square and the Basilica di San Marco. The exterior is amazing, and the interior is as well. The interior is covered with beautiful mosaics using tiny pieces of painted tile. The church was different that many we had seen because of the Byzantine influence mixed with the Romanesque. The church was originally built to hold the remains of St. Mark after being taken away from Alexandria which was controlled by the Muslim Turks. Much of the fill is colored gold. There had to be tens of millions of pieces of tiles used. 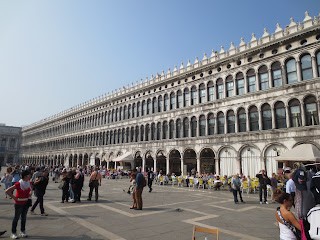 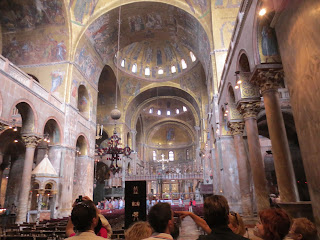 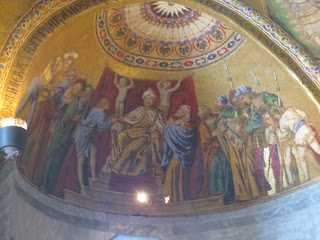 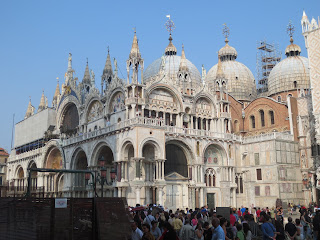 We visited Murano, another island off of the main Venice area. The ferry ride took almost 45 minutes on the way out there because we got on the ferry that made every stop. Murano is famous for its beautiful glass art. The island had far viewer tourists lining the streets. We stopped in a several of the shops and I bought a piece of glass work for my grandmother. We also had a scoop of gelato which is everywhere over here.
We  met up again with Sarah, Jane, and Kim (Jane's friend). We took a short gondola ride through the canals. 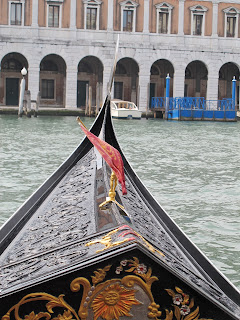 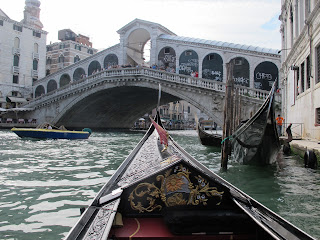 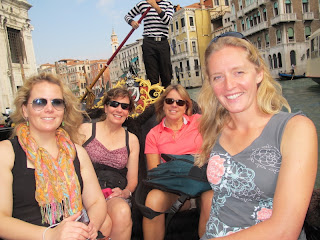 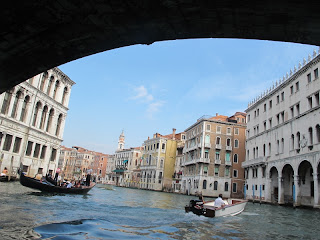 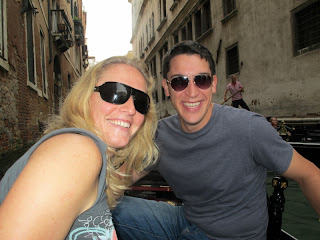 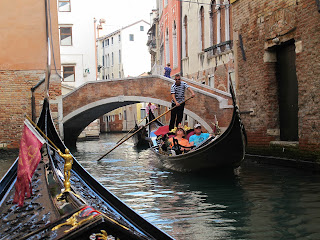 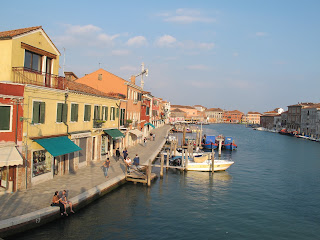