Tim:  We opted for the scenic route that got off the Autostrada 20km earlier than the suggested route and wound through narrow mountain roads. The roads kept getting narrower and we eventually came to a sign propted up in the middle of the road that said, "strada chuisa." We do not know much Italian, and we were out of cell service for me to look it up on google translate. Turns out "strada chuisa" means "road closed". I kind if thought that is what it meant, but the road was not blocked off at all. We continued down the road for several kilometers then we had to move around some large boulders, then some piles of brush and debris. At one point the road was completely blocked and there was a pull out that enabled us to get around the rocks blocking the road. I kept going even with Amber suggesting otherwise. Then we came to a section of road where the outside edge was washed away and you could see that the erosion had hollowed out some of the underside of the asphalt. I kept going and just hugged the inside of the road closely and sped up a little bit. Then it happened....................! We made it to the other side! Three hundred meters later spelled the end of our driving any further. There we finally some cement barriers hindering further progress. On the other side of the barriers a 20 meter section of the road was missing and fell off into a steep cliff side. We did not go any further because I could not push the barriers out of the way. OK, going any further with the car was impossible. We turned the car around and went back the way we came including the section with the bad erosion underneath the asphalt.
At this point the rain that had already started got worse. Once we got cell service again I chose an alternate route on the GPS. This one took us on another side road higher up in the mountainside. We were going up a very steep hill that went to a turn off that look more like someone's driveway when I had second thoughts about going that direction so I stopped the car on the steep hill. We decided that this was not the best way and I needed to turn around, but in order to turn around on the narrow road, we needed to go forward first. The car would not go forward on the steep hill. The car has about a 1.2 Liter engine and a manual transmission. With our heavy load of four people and all our luggage the car just couldn't do it even with the parking break set on the start out. After burning the clutch a few times and stalling out, Amber and my dad got out of the car and I was able to turn around.
At this point or had started raining heavily. We opted for the original route that we were going to take and got back to the main highway. This route took us past our destination, but took the road most traveled. After six hours on the road, we made it to Volastra which is right above Manarola, one of the Cinque Terre villages. As we pulled into the parking area for the village the rain was torrential. The streets are not wide enough for cars so you have to park your car and walk down the narrow streets. We jumped out of the car in the pouring rain to find our B&B. We were all soaked by the time we got our gear to our rooms.
The next morning after breakfast at our B&B we hiked the 1.2 km on the trail down the mountain to Manarola. The hike was beautiful and we descended about 300 meters of elevation to the coast. It was here that we learned that all of the main coastal trails were closed to hikers due to a few land slides, but mostly because a tourist had gotten hurt so all of the five sections of coastal trail between the villages were closed. This was a bummer, but we made the most of it. Amber and I went for a different hike up the mountains to an old church with wonderful views of the coastline. 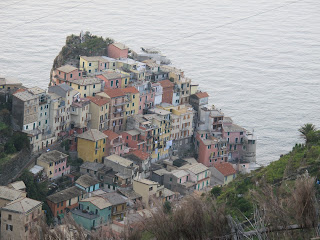 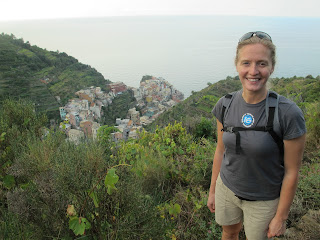 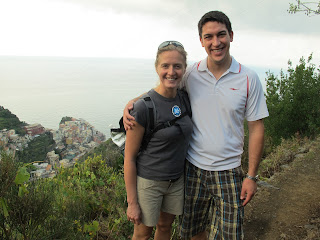 Check out more photos on our facebook album.
Amber:  Cinque Terra is a beautiful place.  Just like the pictures; steep mountainside, covered in terraced vineyards, clusters of pink and orange houses on the bluffs, a huge blue sea.  So pretty!  After hiking down the steep face on our first day there, Tim's Mom and Dad decided to take the shuttle down to the train.  All the food and wine we've been enjoying in Italy has been taking its tole, so Tim and I opted to get some exercise and  hiked down again.  We met back up with Tim's folks in Manarola and boarded the train to Corniglia.  The town of Corniglia is much further up the terrace than the other four.  We huffed and puffed up the hill in the hot sun and finally got into the tiny town.  The hike up gave us a great view from the city to view the Mediterranean Sea and the cost line.  Our guest house had horrible coffee, so we stopped for a cappuccino and lunch.  Before heading back to the train, we all got gelato for the hike back down.  It was getting to be mid day, so we headed to Monterosso for a quick dip into the ocean before leaving Tim's folks to enjoy the rest of the sights and Tim and I hiked up one of the few open trails in the area.  It lead up a steep hill to a crumbling down old church.  We hiked for about an hour up, dripping sweat, stopped for a bit to enjoy the view, then headed back to get back into Manarola.  We poached our guest houses kitchen again and drank wine and made pesto and ate cold cuts and cheese.  It's a rough life in Italy! 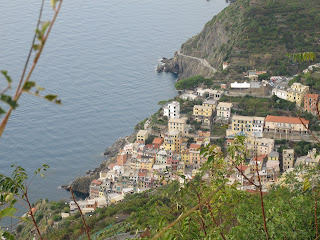 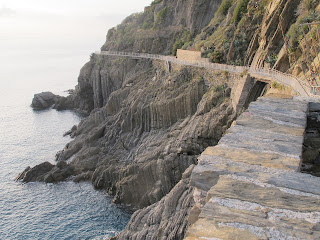 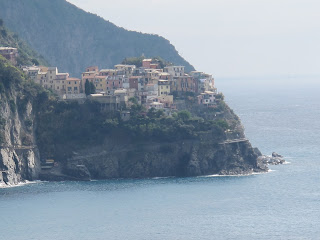 Check out more photos on our facebook album.
Posted by Unknown at 1:27 AM