Florence with Sarah and Aunt Jane

Amber:  We left Camp Del Garta and headed towards Florence.  The navigating went fairly well as the road from Verona to Florence didn't have too many choices.  We were on the Autostrada (their highway system here that you have to pay an arm and a leg to travel on) and it has only a few exits and therefore only a few on ramps. It took a long time to get back on the Autostrada when we strayed from our course.  A lot of "well, which way should we be going???"  "I don't know, there is no way to turn around as there are no exits from the way we are going" went on, but all in all, we did ok.  We finally made it to Florence.  We were staying at the Sheraton as Tim was able to manipulate credit card sign up point system.  Fancy lodging for free!  We unloaded the car, including our travel towels that Tim had used to wipe out the beer from our 'borrowed for life' beer steins, and attempted to head into Florence.  The hotel supplied complimentary rides to and from Florence, but we had arrived just at the right time to not have any scheduled for the next several hours.
We accidentally road a bus into Florence for free.  We walked a long ways to the nearest bus stop and waited and waited to jump on a bus.  Finally one came, so we climbed on, and had our euro all ready to go.  There was no where to put the euro.  The bus driver just looked at us, said something in Italian, and started driving.  We couldn't pay and we couldn't get off!  We sat down, and waited to see what other passengers would do.  They all had passes.  You apparently can not buy a pass on the bus, they are sold in tobacco shops around town. Who knew? But our driver didn't care.  So, somewhat paranoid about having a cop climb on board and fine us a hefty fee for poaching a bus ride, we guiltily road into Florence.
Our friend Sarah and her Aunt Jane were traveling through Italy for a few weeks and we were able to join them in Florence.  Because we had taken a small nap in the wonderful king sized bed that the Sheraton had provided for us, it was getting a little late when we found them.  They had been sipping on wine, and we decided that we should do the same.  We sat in a square right next to the Domo, a huge dome on top of an absolutely beautifully facaded building and one of Florence's coolest sights.  We had lots of wine and made our way on to view the oldest bridge into Florence.  During WWII the rest of the bridges had been destroyed, so it was pretty cool to see one, complete with all the shops, that was still functioning and as old as Florence.  We toured around a bit more and saw the replica of David, in a square right where the real David used to stand.  It was a beautiful replica, and there were actually a lot of originals in the same square that were just as impressive, if not more, just not by Michelangelo.  But just as naked.
We decided on having dinner in a little restaurant across the bridge.  Tim and I soon realized that traveling with Sarah and Jane may be the undoing to our budget.  Drinking wine and eating delicious Italian food with them is just so fun!  Sarah and I shared another bottle of vino, but Tim and Aunt Jane decided to have a beer instead.  We learned later that one must always ask the price of beer before ordering... their 16oz pints ended up costing 10 euro each!  Wine is much more affordable.  We walked around a bit more after dinner, but needed to get back to the bus stop as our shuttle to the Sheraton did it's last run at 7:45.  We made it just in time!  The towels we had set out to "dry" had unfortunately turned our entire room into a putrid beer smell, so we balled them up into a ziplock bag, hid them in the closet, and tried to sleep through the smell.

Tim:  Our second day in Florence we took the first shuttle from our hotel into the middle of Florence. We met Sarah and Jane at their hotel. We ventured off the the local Mercado Centrale (Central Market) for aged balsamic vinegar and cheese tasting. High quality balsamic vinegar can be really expensive. The stuff that is aged more than 24 years costs around 85 Euro for a 12 oz. bottle. We tried many different varieties of  the vinegar some served on cheese. It was a great experience and we learned a lot about Balsamic vinegar.
After that we found some lunch. We visited the what is known as the Duomo. It is  a huge 14th century church in the middle of Florence. The Duomo is the tallest building in all of Florence because it is already really tall and there also laws that keep it that way. The outside facade is covered with beautiful white and green marble that was put on in the 19th century. The inside was full of beautiful murals for as early as 1350. Many of the murals are huge, as large as four meters by six meters.
We visited the Campanile, the tower next to the Duomo. We chose to save the 2 Euro and hike the over 400 stairs to the top. At times the stairs we so narrow that only one person could move past at a time with the other person plastered against the wall so that someone could pass by. The view from the top was beautiful and we were able to look over most of Florence and the Duomo next to us.
Our third day we visited the Uffizi Museum. It includes one of the world's best collections of Renaissance art with thousands of beautiful sculptures and paintings. We spent almost three hours touring the exhibits. 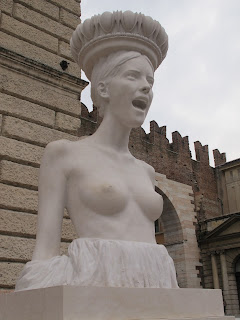 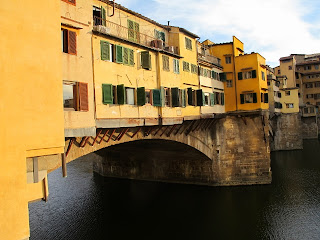 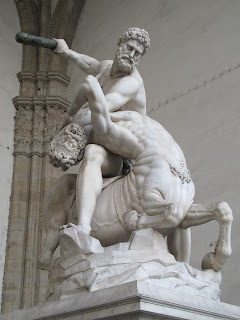 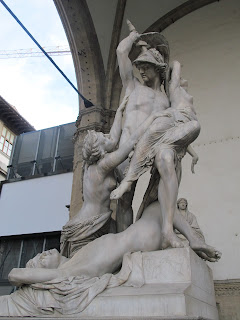 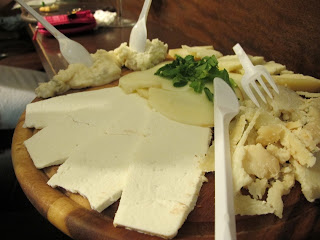 Cheese Plate at a Wine Bar 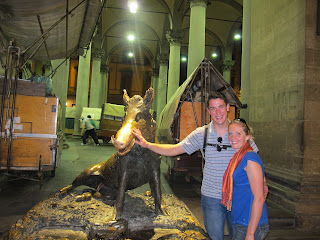 Florence's Lucky Boar
Posted by Unknown at 2:39 AM