Amber:  Bagan was definitely a highlight for me from our trip in Myanmar.  Found in central Myanmar, it is a huge Buddhist complex of over 3,000 stupas, monasteries, learning-caves, and temples. These span across 20 square miles, following the Ayeyarawaddy River.  They were all built between 1100 AD and 1300 AD, so the same time as Angkor Wat in Cambodia.  It is believed that there used to be over 4,000 stupas back in Bagan's hay-day.  The river has changed its course over the last 1,000 years, therefore causing close to a thousand stupas to be lost.  Earthquakes, and of course time, has taken their tole as well, so a lot of reconstruction has taken place.  Millions of dollars have been invested into restoring Bagan.  Unfortunately, historic design hasn't always been followed, and UNESCO dropped Bagan after comparing the extravagant, sometimes over the top, restoration, to Disneyland.  We still thought it was an amazing.  Each structure was different.  While not as grand as the huge, sprawling temples of Angkor, the number of stupas as well as their uniqueness, was awesome.  Some of the stupas still had original frescos of the Buddha painted on the walls and ceilings.  It was amazing looking at 1000 year old art work! 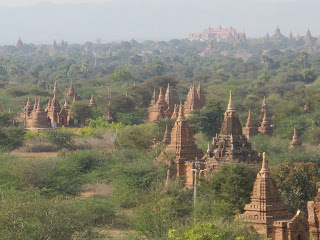 Tim, Ciara, Justin and I took the slow boat down the Ayeyarwaddy River to Bagan from Mandalay.  The 17 hour boat ride was painfully slow as we motored down the river.  Accommodations were to sit very squeezed on the upper deck on plastic lawn chairs.  At four am, it wasn't ideal.  As the day wore on, people unloaded slowly into the small river villages, and our deck space became tolerable.  The sun came out, and it was a beautiful ride down the river.  We ended up getting a few Chang (Thai beer) and played some silly road trip games to pass the time.  We arrived in Nyaung Oo, the small town just north of the historic sight at around 8pm.  It was dark out, so we found a hotel, sleepily had some dinner, and every one was extremely happy to crawl into bed early that night. 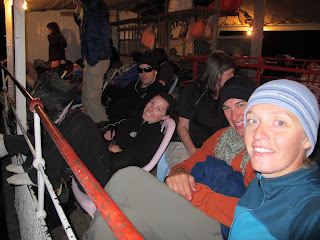 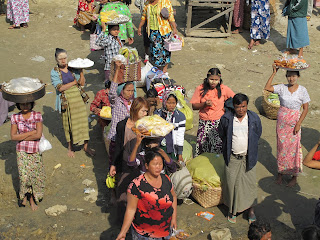 The next morning, the four of us rented bikes and toured the main temples and stupas of Bagan.  Tim bought a map and planned out our day.  It was extremely hot out, but the sky was blue and the sights, amazing.  We took a loop that had us take the less traveled road, viewing literally hundreds of stupas as we biked past in the heat.  Old Bagan houses the most well known stupas and temples, so we made our way there.  After marveling at the beautiful stupas, temples and monasteries there, we biked back towards Nyaung Oo.  Tim and Ciara had been having issues with their bikes being lower geared than Justin and mine.  Both Justin and I ended up at an intersection, waiting for Tim and Ciara.  We waited.  And waited.  Finally, Tim arrived, pushing his bike.  It had a flat front tier.  Ciara was not with Tim, as we assumed she would be.  Justin was just about to turn around to look for her when she too came into view, pushing her bike.  Her peddle had fallen off.  As it turned out, right where we were waiting, a nice local man had an abundance of tools.  He fixed Tim's tire, and then Ciara's peddle.  What a sweetie!! 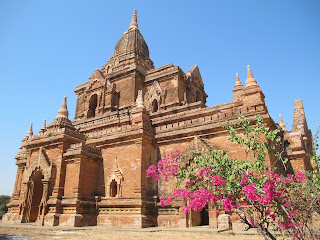 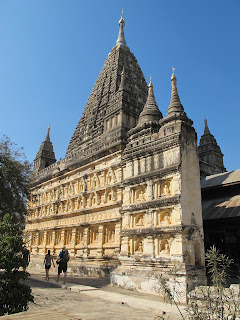 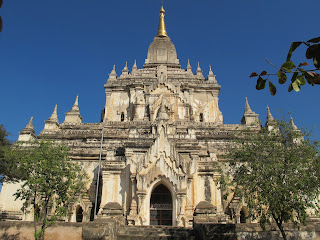 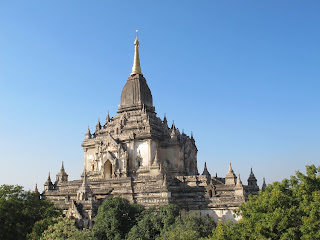 Ciara and I had asked the man whom we rented our bicycles from if shorts were ok, or, as we were visiting a religious sight, if we should wear long pants.  He had assured us shorts were fine, and we ran into no problems until our final stupa.  We should have know better when we pulled up on our bikes and a group of women rushed out, exclaiming that we should park our bikes next to them.  They pinned butterfly flowers onto our shirts and told us to leave our shoes with them as well.  Ciara and I had no longies, so they allowed us to borrow some they had in their shop.  The local people had been nothing but gracious and sweet to us so far, so we thanked them and carried on to view the stupa.  On our return, we got bombarded.  The woman demanded that we look at their shop, and forcefully made us sit down.  They wouldn't let us stand up.  The items they were selling where hugely inflated.  Ciara and I felt some what obligated to purchase something due to their generosity with letting us borrow their longies.  However, they were very aggressive. I would put an item down, and they would grab my hand and put it back in it. I tried to stand up, and they shoved me back down.  They were doing the same to Ciara.  Finally, we decided we just needed to leave.  The women became very angry, and started yelling, calling us cheap.  We got onto our bikes and shakily biked away.  How awful! 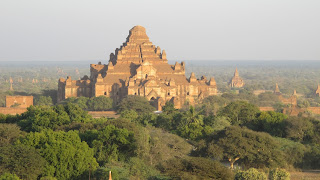 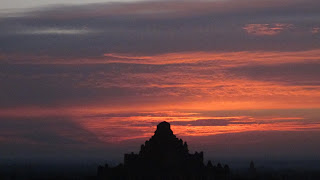 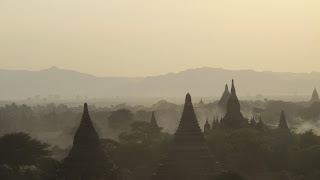 We viewed the temples of Bagan three more days after that.  The next two days we rented a van and looked at the further out sights.  We were even able to climb up onto some of the temples, allowing for amazing views of the planes of Bagan.  We attempted sunset, but the cloud layer didn't work out for us.  We decided to come back for sunrise.  Sunrise was beautiful.  I think all four of us could have spent a week or more at Bagan, especially at sunrise and sunset.  It was so beautiful there! 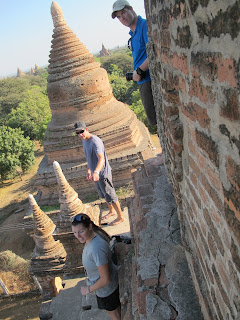 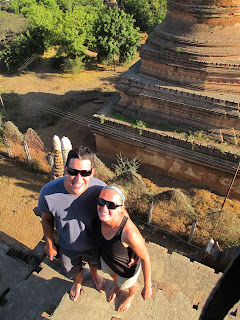 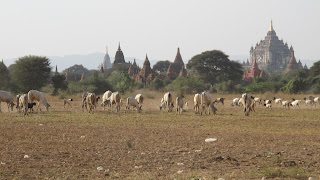 We became friends with the owner of our favorite restaurant in Bagan, Weather Spoon.  Winton, the owner, had traveled to Europe to learn about Western food and service.  They made the best burger in all of SE Asia!  Tim had three in a row.  The red curry was also amazing.  And we had an avocado salad with each meal.  We pretty much didn't eat anywhere else once we found Weather Spoon. 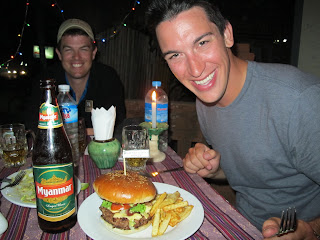 Winton was from a small village about 13km away.  He invited us to join him to a very special ceremony where young monks are joined into the monastery. We were thrilled for the opportunity.  It was a very beautiful ceremony, but we felt like the main attraction.  The moment we arrived we were ushered into the front row to get the best pictures of the young monks and monkesses.  Next we were lead into a dining hall to sample small snacks.  An old man with only two teeth developed a strong liking to Tim and lead him by hand around the ceremony.  While we ate, he stood and fanned flies from our table! 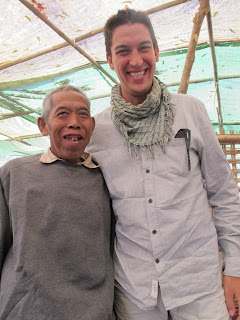 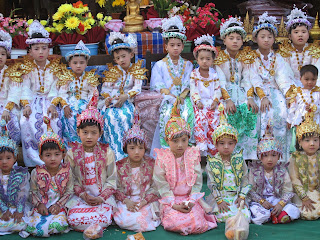