Amber:  Tim, Justin, Ciara and I returned to Yangon a few days before our Myanmar visa's ran out.  Tim has two classes left before he completes his MBA.  Happily, Alaska Pacific University, the private college he has been attending, has made their masters program into an online format, with an on sight long weekend at the end.  It worked out perfectly for Tim; his last two classes were being offered, and we would have 5 and a half months to travel before it was mandatory for him to be back in Anchorage.  His MBA classes started our last two days in Myanmar.  The classes consist of once a week, two plus hour adobe connect sessions, per class.  Myanmar has just opened up to Westerners, and with that, the internet.  The availability of internet, although vastly improving, is still few and far between, and extremely (painfully) slow.  Yangon was Tim's best bet for getting a connection fast enough to run adobe.  He found one that charged about $0.60 an hour, and was good to go! 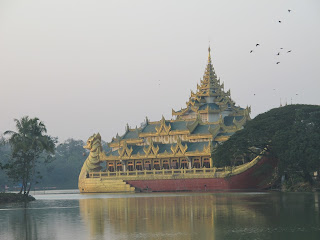 Tim, Justin, Ciara and I enjoyed our last few days in Myanmar.  We were all so thankful we were able to experience such a beautiful, fresh country.  The hot, sunny days and cool nights were so enjoyable.  The history was amazing.  We all loved Bagan.  U Bein Bridge was beautiful.  Inle Lake was spectacular.  The trek was so fun.  The locals were such lovely people.  Tourists, although we saw them, are no where near as plentiful as they are in Myanmar's neighbors.  Myanmar Beer on draft in a chilled mug; so delicious!  But... we were also excited to return to Thailand.  Our last night in Yangon, Tim picked up more travelers tummy.  As it turns out, so did Justin and Ciara, who flew to Bangkok the following day.  The morning of our flight, Tim was greenish white and doubled over.  There is no such thing as keeping hot food hot, cold food cold, or shelf life.  Also, there is hardly the appropriate sanitation (at least in the budget accommodations we visited).  Maybe we should have gone vegetarian for our month in Myanmar.  We met a couple at our guest house in Yangon that shared the hot, hour long cab ride to the airport with us. Their story's about their travels, and sharing ours, kept Tim's mind off how sick he felt. 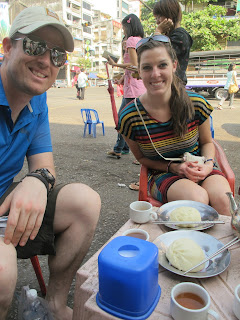 After taking hours to move mere kilometers by bus anywhere in Myanmar, the hour long flight from Yangon to Bangkok was such an easy way to travel. The views were pretty out of Yangon. Flat rice fields gave way to an island speckled shoreline as we followed the coast south.  After about an hour, a brownish gray haze rose up into the pretty puffy white clouds.  Smog!  We had reached Bangkok.

After getting a room on Khao Saun Road, Tim read more for his classes and tried to get his stomach to feel better.  I went to Ethos, my favorite restaurant in Thailand, and had red curry.  It was spicy and delicious.  I decided to have a mango coconut shake for dessert.  I spent $4 on dinner.  Tim and I had managed to live for less than $30 a day per person, including every expense (airfare, visa, transportation, lodging, beer, food), while in Myanmar.  That was the most I had spent on one meal in a month!  But... it was very tasty, and as a bonus, it was nice to know that I wouldn't be getting food poisoning. It was worth every penny! 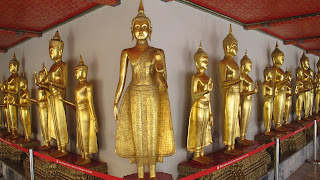