Amber:  We enjoyed two nights in Bangkok before heading north to Khao Yai.   Justin, Tim, Ciara and I were all thankful for Ciri on Tim's phone as we rented a car and maneuvered the chaotic, massive highways leading out of Bangkok.  The city is at least 7.7 million people, and growing rapidly.  Tim is a very good driver, so he was nominated to drive.  Not only does one drive on the opposite side of the road as we do in Alaska, but the driver is on the other side of the car as well! Tim did great (even with three back seat drivers).  Lane lines in Thailand are merely suggestions.  Cars, motor scooters, busses, semis, all dance around each other in a race to get there first.  While he is perfectly safe, Tim is aggressive!  It is funny when we get home, he keeps up the same offensive driving; darting through traffic.  It takes a few weeks for him to re-acclimate to drive like a normal person. 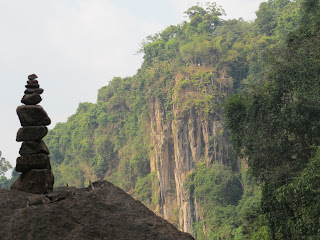 The car ride to Khao Yai was a little over 2 hours.  Khao Yai is an over 20,000 square km park in the center of Thailand.  Wild elephants, Horn bills, gibbons, tigers, sun bears, and thousands of other animals live in it's protected rain forest.  We were all excited for a chance of seeing a wild elephant.  There are over 250 scattered throughout the densely forested mountains.  Monkeys are everywhere, as well as wild elk and little wild deer.  Justin had gone twice before and been skunked both times, so we all had our fingers crossed that this was the time to find the allusive elephants and gibbons. 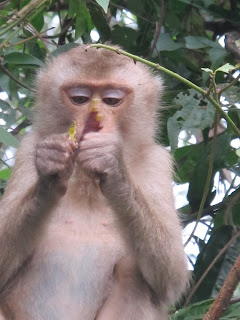 Our plan was to drive between different viewing platforms, hike into them, and wait out the elephants.  They were our top priority.  Or where the gibbons?  We weren't sure, we wanted to see both.  And a tiger.  Maybe a little optimistic, but we were excited.  The park was beautiful.  Who knew that such an awesome rain forest was so close the the chaos of Bangkok?  We saw Horn Bills high up in the trees on our drive into the park.  A family of Pig Tail Maquas sat on the side of the road.  They weren't the least bit shy.  Ciara's first monkeys in the wild, complete with tiny baby monkeys!    We drove into the park and searched out the different viewing platforms.  There was elephant dung everywhere!  The Gibbons were nearby as well, we could hear them calling to each other in the forest. 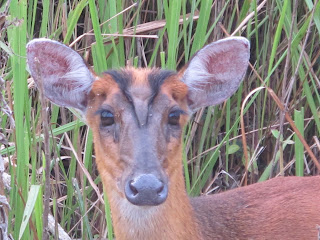 We spent two nights in Khao Yai, renting camping gear and sleeping in a busy camp ground.  We drove up and down roads, hiked through the jungle, waited in viewing platforms, and stayed out so late one night that we missed dinner as the camp restaurant shut down.  We had Reese's s'mores for dinner, cooked over a charcoal fire, instead.  They were delicious!  As we sat cross legged around the coals, Tim got a leach on his foot.  It was horrible!  It was a little inch worm looking thing attached between his toes.  He pulled it off, and of course his foot started bleeding.  That was enough for everyone to climb into our tents and say good night.  Gross! 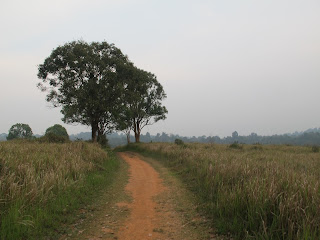 We never saw an elephant or a gibbon.  We did see the biggest porcupine I have ever seen in our camp ground, as well as wild elk, the little wild deer, and a little wild cat like thing.  We needed to spend more time in our camp ground and less out in the jungle, apparently!  We did hear an elephant trumpet twice, and gibbons calling to each other constantly.  We fed pig tail maquas potato chips and marshmallows.  It was fun to have them take the food from our hands.  Their hands are so neat!  The big bull was scary, so we stayed in the safety of our car and fed the little cute ones from our windows.  One was so brave, she climbed up onto the car and wouldn't get off.  We threw food down onto the ground and started to drive away, and she jumped down, snatched it up, and bounded back onto the car.  Even though we didn't find the elephants or gibbons (or the tiger!) it was still a beautiful place, and we all had a fun weekend. 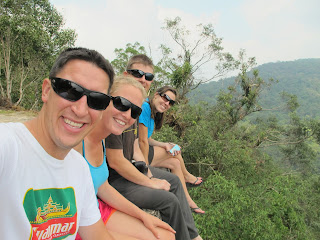 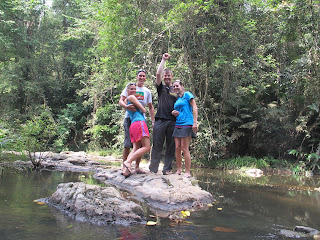