Amber:  One of the reasons I love to travel... the food.  I try not to be too much of a foodie and write constantly about the cool stuff we eat.  But, what can I say, Bangkok's Chinatown's food is worth writing about.  Chinatown it's self is awesome.  It is teeming with energy.  Big red Chinese lanterns are draped everywhere.  People crowd the streets, walking between shops, street stalls, and restaurants.  Everything is so different!  Shark fin soup, birds nest soup, fruits we've never seen, it's awesome (we still havn't mustered up enough courage to eat the birds nest soup, and shark fin soup... that's just wrong).  The streets are still open to traffic, so it can be a bit of a challenge to cross to your next favorite place to eat.  While there are lots of interesting things to shop for, we never actually go shopping, we just eat. 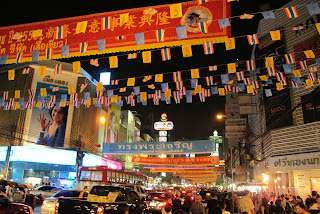 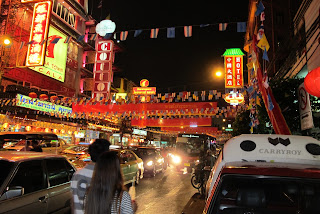 Tim and I have become creatures of habit in Chinatown.  First we start with roasted duck served over noodles at a tiny little food stall. Perched on kids sized stools at a long street side table, crammed in with the locals, we make ourselves at home. It has to be the best duck in the world, for about $1.35.  It is the only thing that they serve, so they have it nailed down to an art. 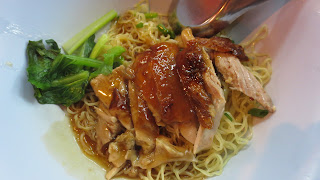 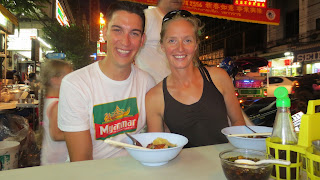 From there, we walk down the bustling street to find our favorite seafood street restaurant and fill ourselves on giant prawns.  Tim is a master at ripping the head off and getting the meat out of the tail.  The prawns are hot off the grill, so getting their shell, head and legs off usually ends up with me burning my fingers and I somehow end up with prawn guts on me every time.  It's all worth it tho, as they are huge, and are served with the best lime chili dipping sauce.  I could eat them for hours.  We get the prawns with a curried chili crab, which is amazing as well.  It is rich and delicious.  Washed down with a big Chang, it's amazing, and we are full. 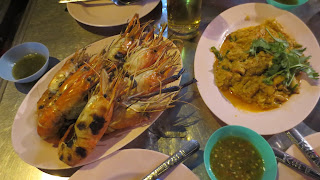 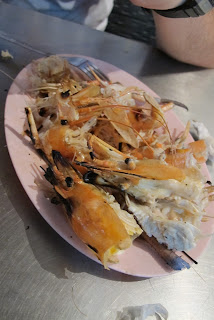 But, we keep going.  There are these awesome, warm, stuffed rolls at a tiny little food stall that are to die for.  They are a cross between a biscuit and a dinner roll, warmed and filled with butter and your choice of peanut butter, marmalade, chocolate, or cinnamon sugar.  Having tried them all, marmalade is my favorite.  For Tim, its all about the peanut butter.  Really, its the melting butter that matters.  And at this point, we have to stop eating or else we would burst. 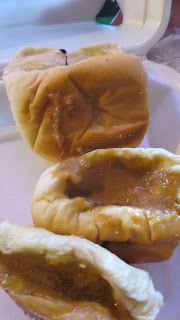 We love taking our friends to Chinatown.  It's a fun way to spent the evening.  So far this time in Thailand, we have gone twice.  The first time, Tim, Justin, Ciara and I took a ferry down the Chao Pria River and they did the circuit with us.  After impressing them with the duck, Justin was able to convince us that dim sum needed to be added to the mix, so we went off in search of the best dim sim in Chinatown.  Being close to Chinese New Year, it was really crowded.  Being as we were in Chinatown, it was really hard to find dim sum.  We were able to find the dim sum restaurant, however, and all shared a large selection.  Ciara had never had dim sum, but I think she now has new favorite food group.  They were tasty. 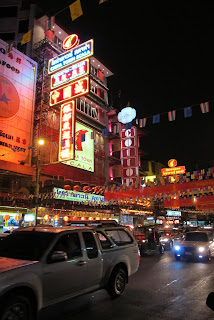 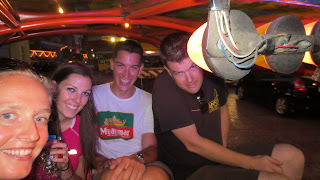 The second time we went back, it was actually Chinese New Year.  Complete with the big dragon puppets, it was a special time to be in Chinatown.  It was so packed with people, the streets were actually closed off to traffic.  We hit up all our favorite food groups, and enjoyed the show. Unfortunately, all the photos are locked on Tim's phone, so you will just have to imagine how cool it was!
Posted by Unknown at 8:30 PM