Amber:  Tim, Justin, Ciara, and I had the most terrifying bus ride of our lives driving north from Hsipaw to Py Oo Lwin.  Well, maybe not of our lives, but it was scary.  The roads over here are narrow, and mostly wind up and down gradual hills.  There is a huge gorge between the two little mountain towns that one must slowly zig-zag down, cross a little bridge, then wind and wind and wind up.  With no guard rail, and a very steep free-fall like cliff off to one side.  In a big, long bus.  With breaks we weren't too sure about.  Early on in our drive, the bus pulled over to hose off its breaks to cool them down.  Not so good on building ones confidence about the vehicle.

We had heard that the train ride was amazing between the two towns, as there was a really cool bridge, apparently crossing said gorge.  We have been avoiding train travel since arriving in Myanmar as the government charges double for foreigners to take the train from what the locals pay, and also, because they are really slow, rocky, lurchy, and undependable as far as their arrival times.  We were willing to make an exception to switch things up and also get an opportunity to check out the bridge.

We woke up early, had breakfast, checked out of our small, yet very sweet hosted guest house, and took a small truck taxi to the train station.  The ticket master apologized that the train was running behind... four hours behind.  The train was already considerably slower than the bus, so after much debate, we decided that the bridge wasn't worth it, and returned to our guest house to get a bus ticket.

As it turns out, getting a bus ticket meant sitting in a lawn chair on the side of the road, hoping a bus would drive by.  Which finally one did, and we all loaded up onto the bus.  A few other foreigners loaded onto the bus just a few meters down the road, and the purser actually made two local women move to different seats so that the foreigners could have theirs.  The pursers wanted the foreigners to enjoy the shady side of the bus to avoid the mid day blazing sun.   I thought it was rude that they forced the two woman to have to sit in it instead.  Which leads me to the scary gorge.  I literally was too scared to be car sick as we slowly motored down the 1,000' steep face of the gorge.  Tim and Ciara were in the isle seats, while Justin and I sat beside our significant others in the window seats, mesmerized by how close the bus tires got to the edge of the cliff.  No one spoke in the 50 seat bus as we drove down the mountain, the tension was pretty high!

Needless to say, we survived our bus ride.  There was no plunging of our bus off the road into the endless abyss.  Pyin Oo Lwin was a nice little sleepy town.  There is a huge military base nearby, so we did sense a bit more of the governments presence. We rented bikes and toured the small sights throughout the town.  The four of us were really wanting some Western style food.  We found a coffee shop that was owned by an American expat.  They served chocolate cake, brownies, cheese cake, creme brulee, espresso, cappuccinos, iced coffee, etc.  We each ordered a dessert and a coffee and got our chocolate/caffeine fix for the month! We found a fun place to drink beer and play cards.  We had milkshakes made with the local freshly grown strawberries and had more avocados.

The highlight for everyone was the botanical garden.  It was boasted to be one of the best in the world, and while we were skeptical at first, it was actually one of the prettiest I've ever seen.  Justin, Ciara, Tim and I rented a horse drawn carriage to and from (they even let Ciara drive) and spent the day at the garden.  There was a beautiful lake in the middle of the garden.  I was surprised to see a lot of flowers I grow in Alaska; nasturtiums, marigolds, colendulas, snap dragons, geraniums!  The orchid display was beautiful, as well as the lillys.  They even had a nice large aviary, complete with giant horn bills that you could feed if you brought potato chips. We were in their large, treed cage with them, and they weren't especially shy.  They were beautiful birds, and their big beaks were pretty scary when they hopped around, looking for a snack. 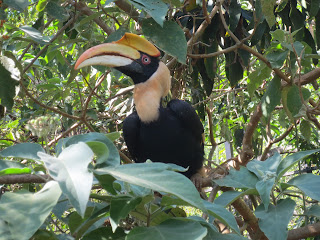 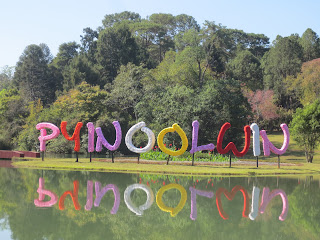 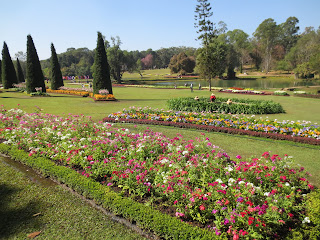 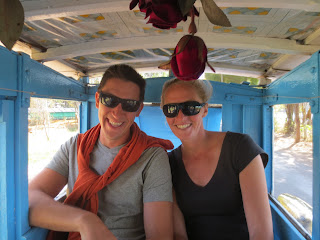