Amber:  I loved the trek from Kalaw to Inle Lake.  The trek was beautiful, and our time taking photos of the unique fisherman on Inle Lake was fun.  After a few days enjoying some amazing local wine, card games and lots and lots of guacamole, it was time for Justin, Ciara, Tim and me to move on.  While we were in Yangon,  we had heard from a couple at the end of their trip in Myanmar that Hsipaw was the highlight of their time here, so we booked the 14 hour bus ride north.

We arrived at about 2am. Justin had unfortunately forgotten "The Book", the Lonely Planet 2012 edition on Myanmar, at the lobby of our hotel at Inle Lake.  We sleepily piled out of the bus with a few other travelers into the dark streets, a little more disoriented than usual.  Just as our bus drove off into the night, the little town of Hsipaw lost power.  So, instead of it being mostly dark, it was completely dark, with just a few twinkling stars for light.  It was chilly.  We had no idea where the bus had dropped us off.

A very nice, very bundled up couple pushing a bicycle walked by and we were able to gesture that we were looking for a place to sleep.  We had called ahead and had booked a hotel in Hsipaw, so tried to tell them the name of our guest house that was somewhere out in the dark.  They kindly led us off into the night.

I think there are all of three guest houses in Hsipaw.  The couple lead us to a guest house where a receptionist spoke a little English.  As it turns out, the guest house we had booked was all the way across town, next to where the bus had dropped us off.  We thanked the nice couple and hiked back through the dark.  Being as it was also the cheapest guest house in Hsipaw, our rooms turned out to be a little rough.  The mattresses were so hard that we were torn between using our blankets for additional padding, or for warmth against the chill. We opted to put one down as padding, put on all our warm cloths, including mittens, and huddled under the other blanket until the sun came out and warmed up our room.  Myanmar is close to the Equator, but at an elevation over1000 m, Hsipaw is pretty cold at night. 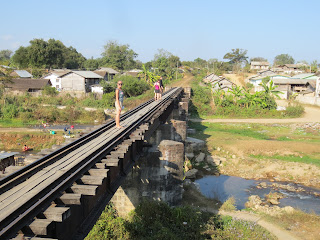 Our time in Hsipaw was very mellow.  During the day, the sky is cloudless and the sun is hot. There was a small collection of stupas from the 1100's that bordered the edge of town.  We got a little lost and ended up hiking the long way to get to them.  We even had to cross a creek via the rail road tracks on a old, rickety bridge. The stupas were pretty cool, once we found them, making us excited for our future visit to Bagan. The coolest one had a tree growing right out of its top. 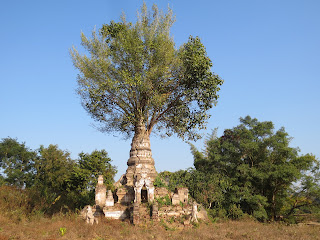 We rented two motor scooters one day and went in search of hot springs.  They turned out to be warm water that was fed into two small cement pools.  We voted to skip the hot spring experience, and just enjoyed the motor scooters, driving around the hills that surround the small town and following the back roads along the river.  Ciara had never been on a motor scooter before, so she had fun riding on the back of Justin's bike.