Amber:  U Bien Bridge is just north of Mandalay.  It is about a quarter mile long old bridge that is completely made out of teak.  As luck would have it, it is positioned so that at sunrise, and again at sunset, it is silhouetted against the suns rays.  Villagers and monks frequent the bridge as, to this day, it is the main means to cross between the two little villages that border the lake it crosses.  So, as a photographer, our friend Justin really wanted to go see it.  He put it as one of his Top Three of Myanmar.  We were excited to go check it out as well.

We arrived in Mandalay after hiring a taxi from Pyio Oo Lwin for about $30 for the four of us.  It was supposed to take over an hour and a half.  It took under an hour and fifteen minutes.  I think our driver thought he was in NASCAR as he zoomed down windy roads, around bicyclists, past buses  and dangerously close to small children and dogs on the side of the road.

Mandalay is a big city.  It has a lot of urban sprawl.  We had finally dropped out of the mountainous region we had been in since Kalaw, so it was considerably warmer.  After searching for a hotel in the budget traveler district, the four of us went out for some dinner.  There isn't much for restaurants in this area of Mandalay, so we settled for some traditional Burmese food that was recommended by Wiki Travel.  This consisted of buffet style curried pork, chili chicken, vegetable chicken, and variety of cooked vegetable dishes.  Justin tried the pork, while the rest of us had chicken and shared a few of the vegetable dishes.  Aside from being quite oily, and at room temperature, Burmese food is good.  Not something I would eat on a regular basis, but enjoyable.

Unfortunately, by the next morning, Justin was experiencing full on travelers stomach and unable to do much more than look miserable while he lay in bed.   Ciara, Tim and I were fine, so hoping Justin would be up for going to the bridge by sun down, hired a small truck with seats in the back to see the sights of Mandalay, with a stop back at our hotel to check on Justin's progress.  We hiked Mandalay Hill, which is a pretty steep hill that you had to climb barefoot as it is holy.  Thankfully there are steps all the way up it, and several stupus housing Buddha along the way.  At the top stupa Ciara and I had to wear longies, the traditional Burmese skirt, in order to walk around.  We weren't sure why, but all the locals were laughing and pointing at us.  I'm sure that other foreign women had climbed the hill before.  A young man bashfully came up and told us we looked beautiful, but we were pretty convinced he meant silly.  We never found out quite what was so strange about the two of us in the longie. 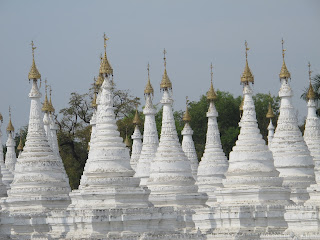 We went to several stupas on our tour of Mandalay.  Ciara and I did not plan ahead.  As it was hot out, we had worn shorts and tees.  At the first stupa we went to, we met a sweet old Burmese woman who's grandfather was German and grandmother was an American.  How cool, what a romantic story that must have been for her father to come over and meet her mother so many years ago!  It must have been so different back then.  She kindly informed us that we must wear the longie in order to enter any the holy sights.  Which, of course, we already knew, we just weren't thinking when we left our hotel. Our taxi driver was nice enough to give me his jacket to wrap around my legs, put on some shorts and gave Ciara his longie so that we could carry on.  We saw the worlds "largest book", which was unique.  There were about 200 stupas that housed the Tripitaka, the Buddhist holy text, all lined up in orderly fashion.  Each stupa had a different verse from the Tripitaka, and together they completed the text. 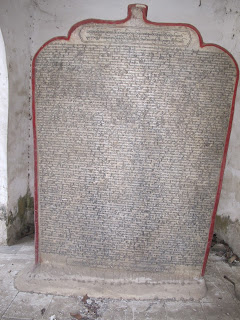 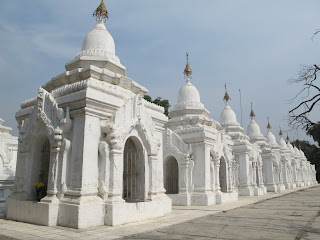 At a different stop, we saw a Buddha that was made of solid gold and had real gem stones all over it.  It was then covered with gold leaf from people paying their respects to Buddha over the years.  This Buddha was quite impressive, even if Ciara and I, as women, weren't allowed to get within 20 m of it.  There was specifically a sign that said "No women beyond this point."  I was so sad!

After checking on Justin and finding him still in the same state we left him, we continued on to U Bein Bridge.  At first, we were not impressed.  Loads of tour busses had apparently had the same idea we had.  The bridge was packed.  We decided to hike across to the other side as we had arrived well before sun set.  On our way across the bridge, we saw a young man fishing.  It was incredible.  He was waste deep in water, and would just lung through the muddy water and somehow come up with a fish between his hands.  It was at least 8 oz!  We were quite impressed when he put the fish into his longie and actually did it again.  And again!  The three of us watched him catch at least five fish this way.  Once we made it to the other side of the bride, we stopped and ate some chili crab.  They were quite small, so we were only able to get meat out of their two front claws, and then broke the body in half and dipped it into chili lime sauce and ate it whole.  The only thing left were the crabs little legs.  It was really good!  We all had two and a half crab each.  So yummy, and so cheap! 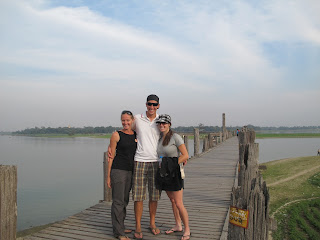 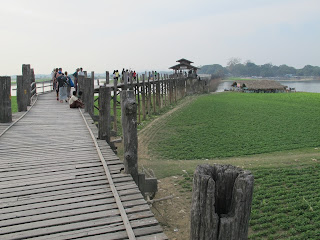 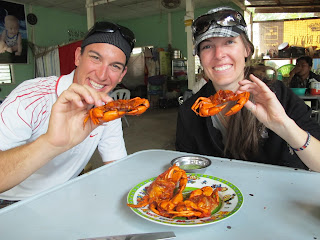 Finally, it was sunset and we were able to experience the bridge like all the pictures we'd seen.  The sun was huge.  You could actually see the spherical shape of the sun as it set behind the horizon.  The bridge was beautiful, and there were two, ancient, dead banyon trees that were really pretty.  We were so happy with the sunset, we decided to postpone our departure from Mandalay so that Justin could come back the next day and hopefully take professional quality photos of a sunset just as beautiful as the one we had just seen. 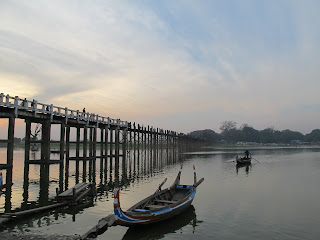 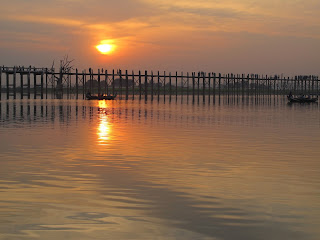 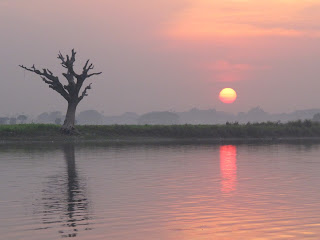 As we returned to our hotel, we drove past a little street stall selling some good looking pancakes.  It was a really simple set up with a large flat skillet where they would take pancake dough, spread it really thin on the griddle, and then break an egg and put other toppings on the inside.  When cooked, they folded the pancake up into a neat little package, and served it with a bean spread. We decided to go there for dinner.  The shop appeared to be run by all young boys ages 8-12 with a few 18, 19 year-olds, all in matching sports Jerseys.  We were ushered to sit down at a tiny street side table and our young server began to bark at us in perfect English all the menu items.  He was so feisty, we couldn't help but love him.  He was probably 10 and ran the place!!  We got chicken and egg stuffed pancakes, topped with cilantro, garbanzo beans, and spicy Thai chilies.  They were delicious.  We ordered some Burmese tea, which is really sweet and milky.  Tim and Ciara liked them enough to have two more.  We had to stop after a banana pancake.  It isn't expected that you tip in Myanmar, but our little serer was so cute we left him about half of what our meal was extra in khyett.

Justin was feeling better by the next day.  We went to the golf course in Mandalay to wait for sun set.  We each hit a cart of balls from the driving range (I have to say, I'm horrible at golf) before finding out that playing an actual 9 holes of golf was going to set us back over $50 each.  Which is well over over Tim's and my budget.  So, we went and found some Western food.  Burgers and Pizza, yum!  The burger was really sweet, closer to meat loaf in flavor and texture, and the pizza had Vienna sausage on it, but over all, a delicious meal after Burmese food.  We were stuffed after our late lunch, so went in search of a ride to U Bein bridge.  We booked a jeep, and off we went.

When we got to the bridge, there was a thick cloud cover towards the West.  We rented a small wooden boat to get the best angle.  With the four of us and its oarer, we weighed a lot for the little vessel.  It started quickly filling with water through large cracks on its side. Our boat is the only one that seemed to have this problem.  We laughed as we were probably in waste deep water, so aside from our cameras, we weren't too worried about the water.   By the time the sun got close to setting, it had slipped behind the clouds.  We asked our boat captain to return us to shore before we sank and we enjoyed a Myanmar beer lake side before heading back to our hotel. 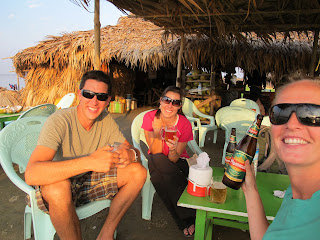 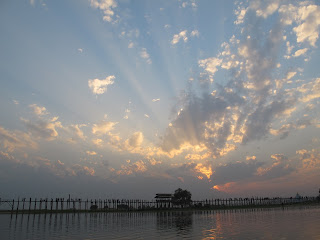