Tim:  We enjoyed our three day stay in Yangon. It took the four of us an entire afternoon to make out a rough itinerary for our one month trip only to have it change several times over the next day as we worked to determine the best route. As the roads are not the best in Myanmar so of the bus trips can take a miserable 15 to 17 hours. We decided our next stop would be Kalaw. Kalaw is within 50 kilometers of Inle Lake one of Myanmar’s top tourist destinations. It is possible to trek from Kalaw to Inle Lakes over a three day, two night hike.
We took a night bus from Yangoon to Kalaw. Between the four of us, we would all agree that it was the coldest bus trip we have ever taken. The AC seemed to be turned up full blast the entire trip. I found my self wearing sweater, coat, hat, gloves, and covering myself with a blanket. I was still cold. The trip was supposed to take 12 hours. It actually turned out to be only 10 hours. Our bus left at 5 PM. We expected to arrive in Kalaw at 5:00 AM, but we arrived in Kalaw at 3:00 AM without a hotel reservation. It was freezing cold when we got off the bus; probably around 40 degrees. After checking out three hotels we found a place for $25 per night.
By the time we arrived Ciara was beginning to feel poorly, and by the time we awoke the next morning, I was sick as well. Thus began two days of stomach problems for Ciara and me (Tim). I began taking antibiotics (Ciprofloxin) by the late afternoon. After a few bouts with bacterial intestinal issues, you get better at recognizing the symptoms.
After our third night in Kalaw, Ciara and I were well enough to begin our trek. Amber and Justin were feeling fine. The name of our trekking company was Uncle Sam’s. Uncle Sam himself had given us a very detailed description of our hiking options. Our two nights during the trek would be spent at home-stays  We would hike about 10 miles per day
Our guides name was Sammya. She was just 20 years old. She was originally from one of the small villages near Kalaw. We enjoyed our first day of hiking. The first five miles were a gradual ascent. We hiked about six hours with several tea breaks along the way at locals houses. The locals drink a lot of weak green tea. Towards the end of our hike on the first day we saw many fields of red chilis. Millions of chilis. It was harvest time for the chilis as well and there were colorful piles of the chilis laid out to dry in the fields.
We were fortunate. We also had our own cook traveling with us. Joe was an excellent cook too. For our first lunch we had several cooked vegetables  avocado salad, and fried noodles. Dinner was more vegetables, eggplant, rice, and a fried chicken dish.
We woke at 7:30 the next morning and began hiking by 8:30 after breakfast. We hiked along rolling hills down to a larger village that had a local market. The market saw very, very few tourists so none of the items sold were to cater to tourists. There were lots of dies, textiles, farming tools ( we actually saw a old fashioned blacksmith). There were people selling MSG by the kilo. They just had a big open pile of MSG laid out on their table. There were lots of kinds of small dried fish, curry paste, and betel nut.
After lunch we began hiking again along a larger dirt road. We hitched a ride for a mile or so on an old wagon like truck with a group of locals and their supplies from the market. The truck was powered by a small two cylinder diesel engine that chugged along at no more than 15 miles per hour tops.
We ended our second days hike at another village in the mountains. As we approached the village, we hiked up the road. Villagers were using oxen and carts to haul water from the water source 500 meters from the village. The villages do not have running water. After dinner and a few Myanmar beers, we introduced our guide, cook, and the local family we were staying with the card game spoons. It was an immediate success. There were eight of us playing with another 8 or so people watching. The locals were drinking rice wine which does not taste good. Even the locals were plugging their noses to choke down the stuff. We played spoons for an hour and a half then listened to some guitar playing and singing before going to bed.
Our final day of hiking leads us through the mountains down into the lake valley. Near the end of our hike we saw some of the largest spiders we had ever seen with the exception of tarantulas, and they were everywhere. At the end of our hike we still had to take an hour boat ride across the Inle Lake to Ngungshwe, the main town along the lake. The boat ride was beautiful, and the lake is amazing. Our cook brought along a small bag of crackers which he threw to the seagulls as we cruised across the lake. The seagulls would fly along with the boat just two feet above our heads and catch the crackers midair. The seagulls would squawk loudly demanding more crackers.
We already had reservations for Remember Inn in Ngungshwe for $25 a night including breakfast. Our guide left us after dropping us off at our hotel. We thoroughly enjoyed the trek and it was definitely one of the highlights of our trip here. 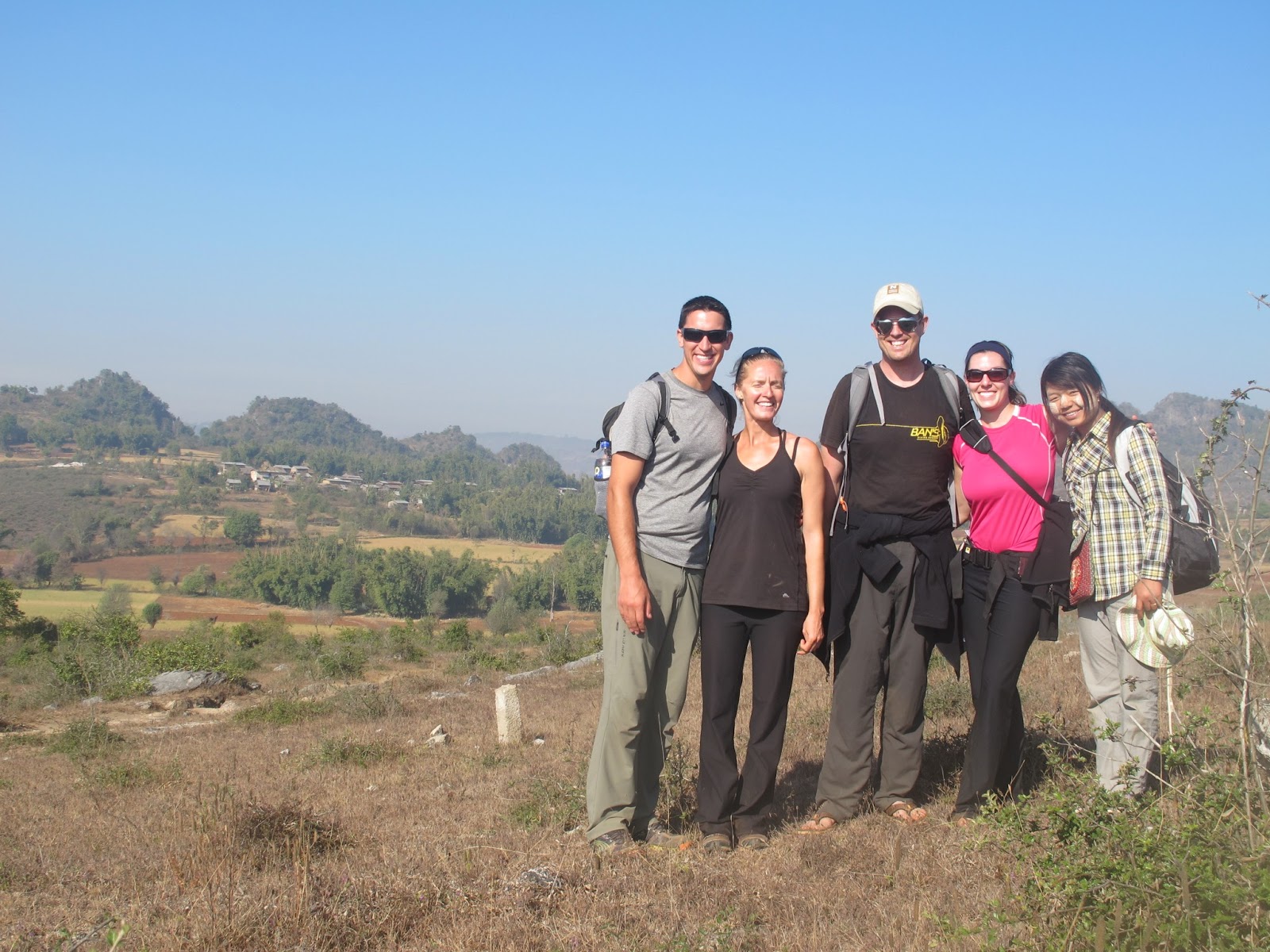