Amber:  After our first two days of river fun, we took a day off and pretty much did nothing.  Slept in, ate some Bacon, Chicken, Cheese sandwiches and banana and peanutbutter pancakes, watched some Dexter (Justin gave us seasons one and two, we're hooked), went and got a huge burger - six by six inches, double patty, home made bun... amazing!  Best burger we've had in SE Asia, hands down.  Watched more Dexter.... nice lazy day to catch up on some of the adreniline from the water slides.
Yesterday we got up fairly early and met up with Justin and Joe and got four motor scooters and some breakfast; sandewich and pancakes.  Getting a little tired of them, but they are still pretty darn good!  The motor scooters were in rough shape; mine had been laied down so many times it was missing a mirror, its right hand break was bent into the opposite direction than it was supposed to, missing chunks of its body, and all of their suspention were close to blown.  I was able to at least get an automatic, the shop only had one and after my last motor scooter feasco, wasnt feeling up for jumping onto a manual right away, and it was so damaged there was no way I could cause it harm - yea!
We filled up the motor scooters with gas (its common to be on E at pick up and delivery) and took off. It wasn't long before the road gave way to gravel mixed with streatchs of broken pavement.  Made for jaring, dusty travel, but the sun was out and life is good!  We navigated 13k down the road, took a small left along a rocky, near foot path, and made it to a beautiful streatch of the Nam Song.  Parking was easy as the locals had built a little shaded structure that for a small fine we could leave the motor bikes.  We crossed a narrow bridge (again, small tole), after a local on a motor scooter laden with goods crossed, no problem.  It was hard to walk side by side, two people, so she had skills that far surpassed mine on keeping that bike in a straight line under pressure!
The first cave, while interesting as it held a sitting Budda as well as reclining Budda, was small and after taking a few photos, we moved on.  A friendly local approached us and told us he would guide us to the next cave, the entrance wasn't far away.  We trampsed through the little village that seemed to have baby animals every where; pigs, goats, ducks, chickens, childern.... The path took us through some grass that was twice as tall as Tim, through some sparse trees, passed a few narley looking spider webs and arrived at the cave enterance.  This one also had a sitting Budda, but it streached on for what appeared to be miles.  He guided us for about one and a half kilometers along the caves windy, sometimes very narrow, path for what seemed like forever.  We had gone so far back that we all were starting to think that the cave must must make a loop... otherwise why would anyone want to crawl through a cave for so long?  As it turns out, there was a very cool reason.

Tim: After hiking by headlamp for a while longer, we met some shallow water. Our guide instructed us to take off our shoes and get ready to swim. Turns out we had another 100 meters to go wading through shallow water barefoot. It was slow going as our feet are not used to hiking barefoot in the dark. On the way we saw cave crawfish that kind of look like shrimp but have no pigment. There were about 3 inches long. We finally made it to our swimming destination. The water was cold but refreshing after sweating our way through the cave. We asked our guide how long till the end of the cave. He told us another 2 or 3 km. We ended up traveling about 1.5 km in before we turned around. A very unique experience that was alot of fun!
After this gave we ventured over to the water cave. This cave as the name would imply had flowing water coming out of it. The 10,000 kip ($1.25 US) also paid for the rental of a tube. Once you were sitting on the tube, you used a rope to pull yourself into the cave. The cave went in about 100 meters before turning around. All the caves were a great experience! The pictures appear light because of the camera flash, but it was pitch black besides the headlamps. 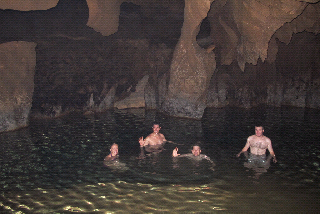 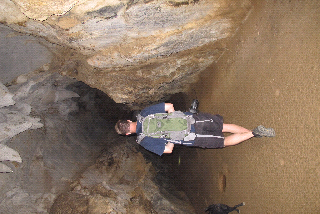 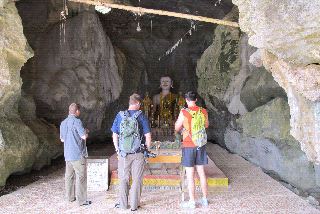 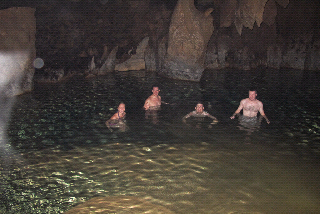 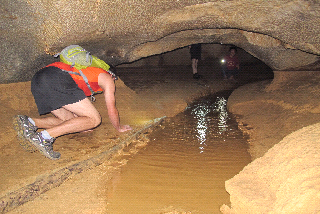 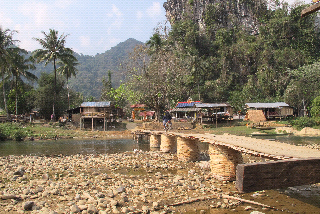 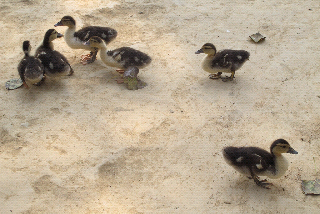 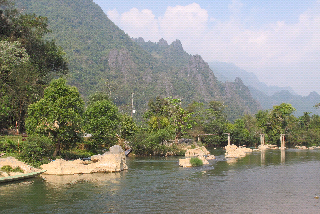