Tim: We went on an excursion last night to get train tickets for our trip to Laos. We took the the Chao Praya River ferry south for several miles until reaching the closest stop to the train station. We new it was about a 15 minute walk from the ferry pier to the train station. We had debated whether or not to take a tuk tuk the short distance, and we decided to walk for the exercise. About 10 minutes into our walk I got us lost, I couldn't figure out where we were on my trusty map. An elderly man walked up to us, and signaled to question where we were going. I showed him on our map which is bilingual. He pointed back the way we came, and kept speaking in Thai so Amber and I didn't understand anything that he was saying. After seeing our bewildered looks, he signaled for us to follow him, and off we went. After being partially scammed several times now, we are weary of trusting anyone who comes up to us on the street being friendly, but he didn't seem to have any alterior motive like getting us to jump in a tuk tuk to the restaurant where he gets a commission.
The Thai man was about 60 years old. He had a definite stooper and a limp on one side. He kept trying to talk to us in Thai, but I didn't understand any of it, so we just nodded yes and kept following. He seemed a little strang as he appeared to be telling random people on the street that he was taking us somewhere. People he did not appear to know. He would also guide us across the busy streets by waving cars past until we were ready to cross then holding up his hand to stop traffic and beckoning for us to follow. He also made sure we noticed the cracks and gaps in the sidewalk as not to trip on anything. Ten minutes into the walk we were a little skeptical if we were going the right way. Once the man even knocked on the glass of a police station to tell a police officer that he was showing us the way. Sure enough 12 minutes into our excursion, the train station appeared. He lead us right to the door. He was just a good samaritan, helping out two lost travelers.
Last night on the way home we booked a tour for a floating market outside of Bangkok. The tour price was only 250 baht ($7.70 US). We had to be ready to go at 7:00 AM this morning. The floating market is an hour and 20 minute drive north of the city. From the price of the tour and some hints on the tour procure, I suspected that this was likely a tourist trap. The vans first took us to an "elephant farm" (3 elephants tied to a stump) where we could pay $15 to ride the elephants into the water....pass. Then we made our way to the floating market where you could pay an additional $4.70 US  each to get paddled through the market. In the states $4.70 each would not seem like much for a paddle boat ride, but for the same price Amber and I could take a a 45 minute taxi ride in Bangkok. Staff were trying to force us to buy tickets for their boats. We decided to walk around a bit and look for a better price. We did find a cheaper boat ride in a different area and it was just Amber and I and our driver in the little canoe. 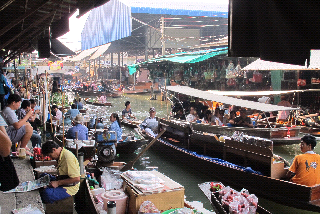 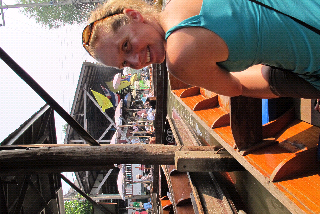 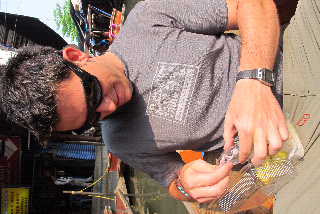 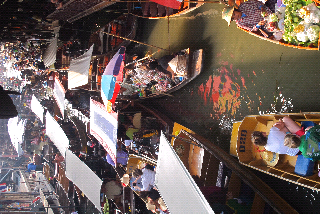 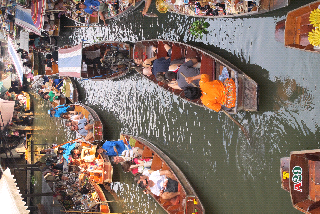 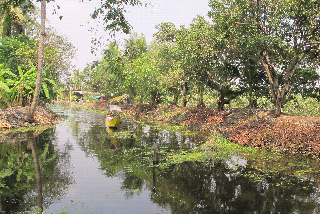 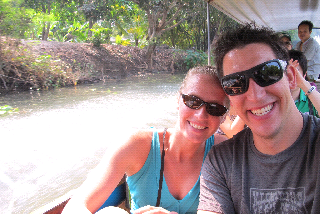 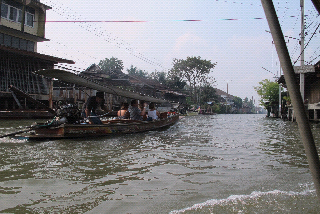