Tim: We schedule a three day combination trek from Luang Prabang. This is Amber and my first trek. We were picked up for a guesthouse at 9:00 AM. We checked out of the guesthouse and dropped our bags off at the tour operator's house before setting off on our first day. Khan was our local guide. We were picked up in an old beat up mini van with two other tourists. The two others were on a one day kayak trip. After an hour ride north of Luang Prabang we set off on our hike from the side of the main road. The dirt road was wide enough for a motor scooter or even a small truck. The hike up to the first village took a little over two hours. This was a small ethnic village will around 100 people. We stopped for lunch then walked around the village before hiking another 10 minutes to the next village over the hill. The small children were curious by our presence and followed us around the village giggling.

We took a different less traveled path on the way out of the village. It took about the same amount of time to get back to the main road. We stayed at a home stay near the river.

Amber:  The first day of treking was beautiful but complicated by a little by food poisoning I had picked up from what we assumed were from some fairly undercooked, possibly old pork skewers that we had snacked on the day before after swimming at the waterfall.  Tim, Justin and Joe had tossed theirs after their first bite; I on the other hand, had happily finshed my entire skewer.  We had gone out the prior evening with Joe and Justin and had a few beers and played some cards but when we woke up early to pack our belongings and have some breakfast I could tell that it was definately more than the few beers... and it was going to be a very long day.

Justin and Joe were packed and ready to go as well as the tour company we had booked by the time we were finished with breakfast. We picked up some water and snacks for the road.  I knew that our guide was going to be a perfect fit for the guys of our group when we arrived at the locaion they stored their kayaks and he made some humorous remarks about a lady boy bird.  Tim, Joe and Justin were laughing the whole drive north!  Not only was Khan funny, but he also was a fairly decent cook.  He made us sticky rice, an assortment of boiled veggies and an incredible chile paste for dinner (very common Laos meal).  The chile paste was so good Tim got the recipe; Thai Chilies, salt, garlic, lime, all with a dash of water.  Definately going to be one of the Hillyer specials back in Anchorage in a year when he gets home!!

After sleeping a little over twelve hours (I went to bed while the guys went to a local pub for a few BeerLaos) I was feeling a little better and up for kayaking.  The hike the prior day had been long and hot with lots of jungle to march through, so if I had managed to do that I was feeling confident that the kayak would be very easy in comparison.  We drove north a little further in search of some white water then carried our double down to the river and climbed on.  It was more of a perch-on style than a ride-in as far as white water is concerned, but we had life vests and dry bags so I was feeling very confident and talking possible a bit too much smack to Joe and Justin about who was going to flip on the first set of rapids.  We set out and the first set we went through were fun; everyone made it with just a little water splashing in the face... or if you were in the front, dousing you completely.  Khan saw where two river currents joined and thought it would be fun to go play in them, we followed suit into the confluence.  The moment the side of our kayak hit the rip, we rolled.  I came up under the kayak and hit my head on it, which was not a big deal as it was very light, but it knocked my sun glasses off.  In an effort to get the kayak off of me, I dropped the paddle which Khan had cautioned us would cost $75 US to replace if we lost/broke.  Tim was able to grab it for me, but in doing so lost his grip on the kayak and got stuck on a back eddy while I got swept down the river.  Khan, realizing I was the helpless one, came to my aid and helped me into the kayak while poor Tim was still stuck in the eddy.  Justin and Joe were able to get him and both our paddles onto their kayak and the rescue mission was complete!   Back on board of our own kayak, we took off down the river and hit a few more rapids, all of which were done successfully and a few that were more technical.  Once we had ran the stretch of rapids, we carried on down the river a ways then pulled out to go to one of Khan's friend's wedding.  It was a traditional Laos wedding, so we were all excited to experence it.

Tim: By the time we reached the wedding, the celibration was already in full swing. There was live music with a singer and a keyboardist. The speakers were large and the music was blarring Laos music with a heavy bass. We were served beef lap, sticky rice, vegetable soup, and lots of Beer Laos. On of the lap dishes was made using raw beef. The beer is usually served with ice in a small glass. The groom introduced himself and insisted on serving us food and beer. We were the only foreigners and Justin and I are about a foot taller than everyone else. Even Amber was taller than all of the men. After a few beers the inevitable happened... We were literally forced to go and dance with the locals. We were physically dragged onto the dance floor. The dancing was done in two lines facing eachother. One side with men and the other with the women. Most of the movement was in the hands, so the hips and shoulders did not move much. Some of the more "happy" people were a little more frisky; shaking their hips as they back into you. It was very fun unique experience. Unlucky for me, I was becoming more ill and had to rest in our truck for a while, but we still thoroughly enjoyed ourselves. 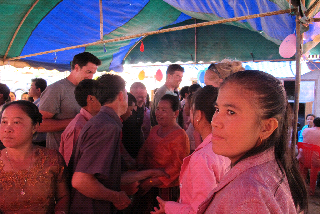 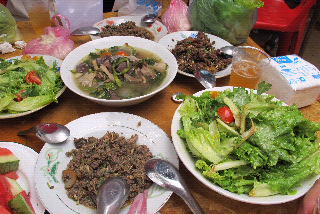 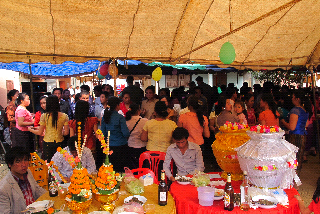 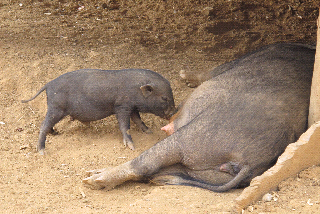 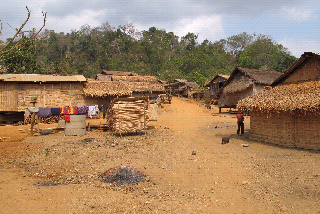 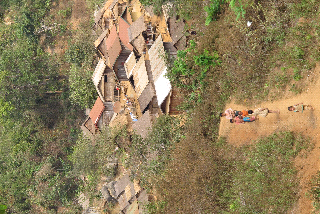 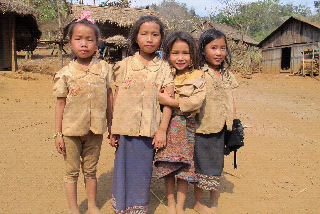 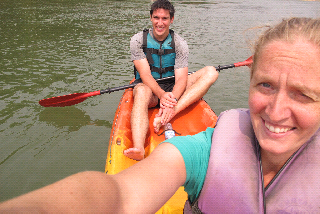 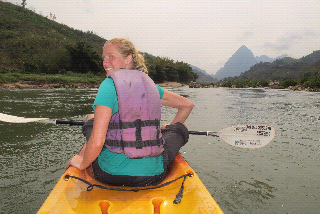 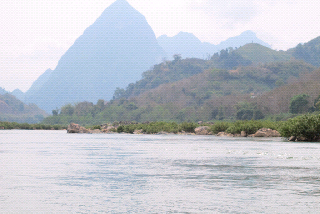 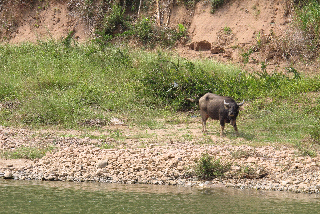