Tim: After eight days in Vang Vieng, we finally moved further north to Luang Prabang, the old capital of Laos. We took a five and a half hour mini van ride. We were fortunate as there were only five people in our 11 passenger van. I got the front seat, and Amber got a row of three seats to herself. This stretch of road is a beautiful ride. The road winds through the mountains and jungle. My ears were popping from the elevation change. Our van did not have air con, so the windows were down the whole time. It wasn't too hot, so the lack of air con did not bother us much. Our friend Justin was not able to make the van ride with us because he picked up some food poisoning the night before and was too sick. We had eaten barbecue at a restaurant served with sticky rice. After Justin had eaten most of his sticky rice he found a colony of ants living in the bottom of the sticky rice container (bamboo woven basket). We are guessing this is what made him sick because we all shared the barbecue yet he was the only one that got sick.
The roads in Laos are narrow, and driving laws are not even slightly enforced. Lanes of traffic serve as basic guidelines, but it is not uncommon to see vehicles driving down the row side of the road. Drivers use their horn alot. The purpose of the horn is not to let someone know that they just made an idiot driving move like we would do in the states. Here in Laos the horn is used to let people know you are coming. So there is alot of horn honking. Short of the wheels, the horn just may be the most important piece of driving equipment there is in Laos.
Luang Prabang is a beautiful city with a lot of French influence. The down town area has been designated a World Heritage Site. It sits at the confluence of the Mekong and Nam Khon Rivers. There is an amazing night market, that is one of the largest ones we have been to. Not only are there a great deal of retail items, but also an awesome food stall market that serves cheap deliscious food!
Amber: Luang Prabang is extremely laied back and very pretty. We got in at about four thirty, found a guest house for 80,000 kip ($10 US) and Tim and I went out for our over seas Valentines dinner in the most romantic city in SE Asia. We found a cute wine bistro and had a bottle of Malbec streat side. The bottle indicated that the wine went well with BBQ pork, so Tim went down to the local street market and found some freshly grilled pork and chicken and returned with them, wrapped in banana leaves, while I continued to sip on the Malbec. As the bistro we were enjoying our wine at did not serve food, we dug in. The wine was better with the pork, after all! What a great Valentines Day dinner! The next day we toured the local watts with Joe and enjoyed more of the night market's food. 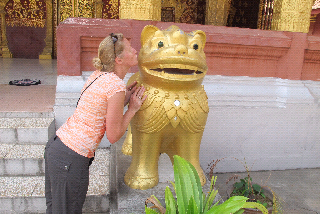 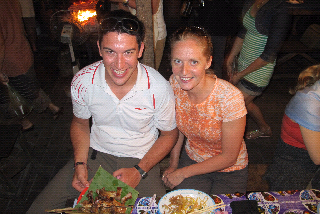 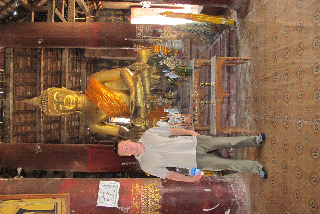 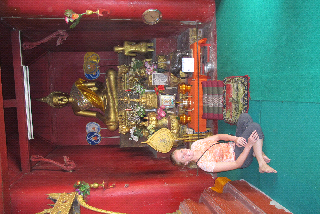 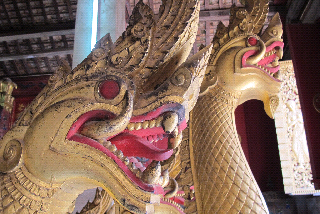 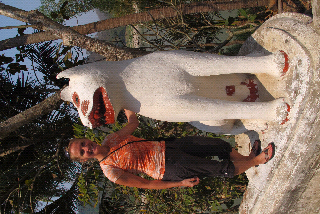 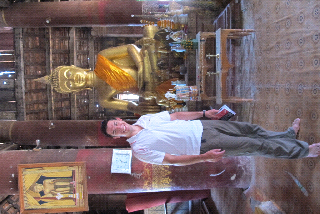 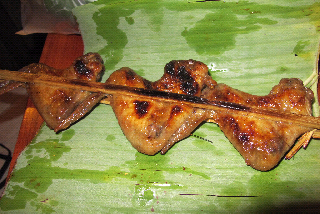 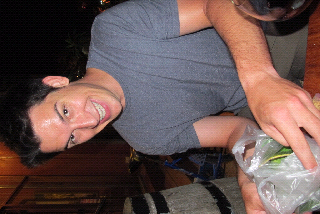 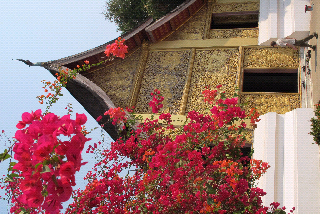