Tim:  We had to leave the wedding celibration early, because our transport van had to be at the elephant to return other customers back to Luang Prabang. Our driver along with our guide Khan were drunk from the Beer Lao that was flowing freely at the wedding. Our driver was the less drunk at least and he flew down the narrow road while Khan sang drunk karaoke to the blarring stereo. We made it to the elphant camp in one piece.

The elephant camp was located on the edge of a river, and the scenery was beatufil. Large limestone cliffs and a cave across the river from us had a monastary. We relaxed for the rest of the evening. I was still not feeling well and needed to lay down. Amber, Justin, and Joe joined Khan for dinner with a local family in the small village next to the elephant camp.

Amber:  I have to start out by saying, I loved Khan, our local Lao guide.  When guessing how old I was, he said 25!!   He guessed older for all of the guys!  He knew someone that was getting married so invited us to shorten our kayak trip and join him as his guests to their wedding.  Done with rapids for the day, we were happy to crash the wedding!  Not long after arriving, Tim decided to lay down as my symptomes had caught up with him.  On my way to check on him and find a toilet, the middle aged ladies of the wedding found me and drug me back to their table.  Once seated, they provided me with two flimsy dixi cups of ice and Beerlao.  As it turns out, it is rude to not finish the beer in one drinking.  Everyone wanted to toast me, so I double fisted and drank so much beer in that sitting!  I spoke no Laos, and they no English, so there was just a lot of smiling, cheersing, and chugging.  They also decided that I must be quite hungry, so when I wasn't drinking, they were litterally putting chopsticks full of food in my mouth.  It was quite the warm welcome, but I was still feeling well under the weather from the food poisioning I had picked up two days prior, so finally excused myself and joined the guys at the table.  A very short Laos man was sitting with them and when a new song started, he drug me out onto the dance floor.  I was probabsaly a head taller than him, in my still fairly damp cloths I'd been kayaking in, trying to dance.  How funny!

After surviving the windy road to the elephant camp, we discovered the camp monkey.  Khan demonstrated how nice she was and let her sit on his shoulder.  Convinced that it looked easy and she friendly, I gave it a go.  Khan, as it turns out, has short hair, while my blonde bun on the top of my head drove the monkey wild.  She didn't know if she wanted my hairtye to chew on or my hair, once freed of the tye, to swing on.  Either way there was a bunch of Amber yelping and monkey hair pulling!

Khan was a little tipsy to be cooking us dinner, so he asked on of his friends if we could join them for dinner in the town adjacent to the elephant camp.  Tim went to bed, feeling worse than ever, while Justin convinced me to "man up" and have another Beerlao and join the family for dinner.  The food was actually amazing.  Khans friends wife had prepaired fresh river bass, dried river weed that pretty much is a nori wrap, a papaya salad and of course stickey rice.  Simple, but so good!  Khan and his friends broke out the Lao Lao (local whiskey) and the karaoke began!  Thankfully, I was able to avoide both the whiskey and the Lao Lao and after a few hours Justin was kind enough to walk me back to the now dark elephant camp.

The next morning Tim's fever had broke and we woke up to the three elephants walking from their place in the jungle they had been kept over night to the river for their first morning dip.  All three elephants were female, ranging from 32 to 40 in age.  Much smaller than African elephants, they were still an impressive sight!  After breakfast we loaded up; Justin and Joe in a platform like saddle on top of one and Tim on the platform with me on the elephants neck.  Khan must have know that the guys were humoring me with the elephant camp part of the treck, so I got the best seat! So much cooler than a horse!  She was huge!  We took the elephants for a short walk through the jungle but had to return them to camp to let a newly arrived group have their turn.  While we waited for more elephant time we got to play more with the monkey and had some lunch.  Finally the group left and we got to take the saddles off the elephants and take them to the river!  So much fun riding bare back on an elephant!  We got to the river and after the teenage elphant handlers had their laughs by throwing dried piles of elphant poop at each other, the elephants and us the boys swam out and the elephants followed.  They ended up with their backs covered in water and Joe, Justin, Tim and I all thought how pretty and amazing it all was.  Then the feisty mahout gave the elephants a command and they all did a duck and shake with their heads!  I am proud to say that Tim fell off faster than I did, but when the elephant completely submerged her head and then began to vigerously shake I didn't stand a chance!  After two dumpings from the elephant I had been tossed enough, the guys wanted to see who could last the longest.  I think Joe won, but was the sorest for it.   All and all, an amaing day and an amazing experiene! 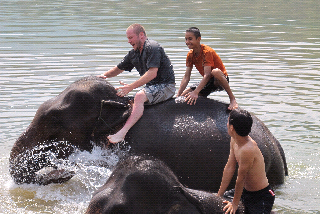 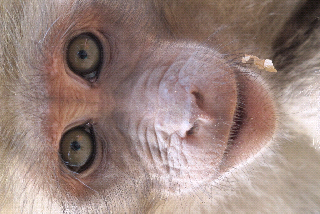 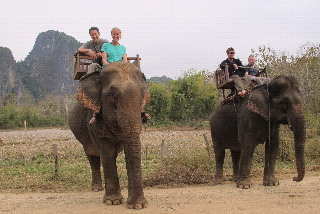 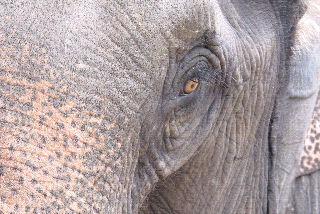 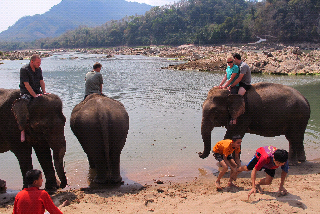 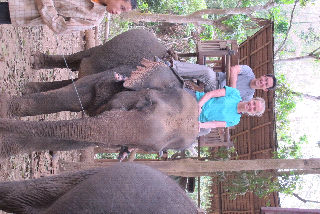 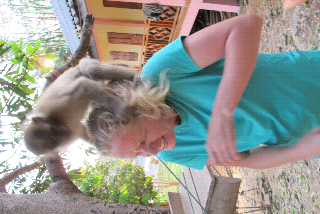 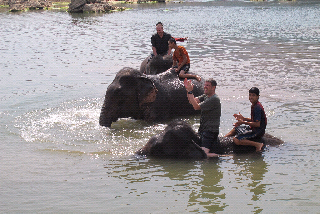 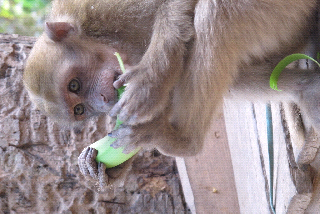 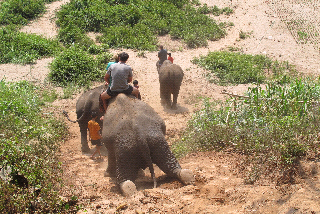