Tim: With more than eight days of Bangkok over two different stops, Amber and I are becoming fairly familiar with getting around in Bangkok. Over the past few days, we have used taxis, tuk tuks, water taxis, and subway trains to make our way around the city. Bangkok with a population of more than seven million people can be an overwhelming at times. Right now, it is hard to remember everything that we have done over the past few days.
We visited the the an entertainment park on the outskirts of Bangkok called Siam Park City for our friend Justin's 30 birthday. We originally went just for the water park (300 baht , $9.25) but some of us (not including Amber) upgraded to the full park with the roller coasters for another 250 baht. It was a really great time! The water park was fun, but a little lacking. There were really only two water slides. One of the rides was stated as being the tallest water slide in Asia at 70 meters. It was designed for smaller built Thai people as my shoulders would not fit into the shoot, and I gained more speed than the average built Thai person, so I got air born off the jumps/bumps half way down. All of us were a little beat up after the water slides with scrapes, bruises, and hurt muscles. We moved on to the roller coaster park after an hour or so. It was interesting being in a theme park with so few people. We did go mid week, but there were no more than 400 people in the entire park. We never had to wait in any lines and on one occasion, Justin, Joe and I were the only ones on the roller coaster ride. We actually just stayed on twice without even getting back in line. We have pictures of the park, but we can't get to them right now as they are stuck on an MS memory card till we get the right adaptor.
On a different day, Amber, Joe and I visited the Snake Farm which is operated by the Thai Red Cross to produce anti-venom for hospitals around the world. We got to watch the handling demonstration which was really cool to watch. Some of the snakes were aggressive and kept lunging at their handlers. On the same afternoon we visited Lumphini Park which is Bangkok's oldest and largest park. We took paddle boats out for a cruise and saw many monitor lizards all around the man made lakes and canals.
The next day, Amber and I met up with Cindy Choa, a friend from Singapore who was visiting for a wedding. We walked around a few malls and enjoyed awesome Thai food at an upscale Thai restaurant.
Tonight Amber and I visited China town again, because it was in close proximaty to the railway station the we needed to go to to pick up train tickets for our trip to Laos in two days from now. We had Chinese roasted duck with noodles. Amazing! Then we stood in line at a popular place for Chinese pastries that we had filled with Marmalade/Butter, Chocolate/Butter, and Peanut Butter. Definitely the best Asian pastries we have had so far. Then we sat down at a seafood place of a plate of giant grilled prawns.
Earlier today it started pouring rain with thunder and lighting. Some of the lighting strikes were within a mile of us and lit up the afternoon sky. The thunder was the loudest I have ever heard. It is so loud it startles you. 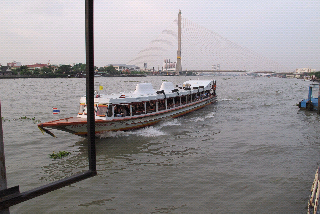 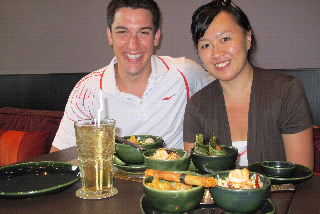 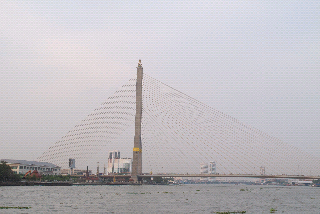 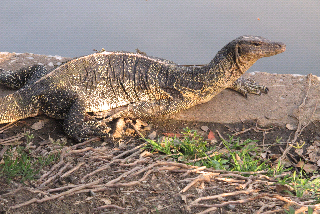 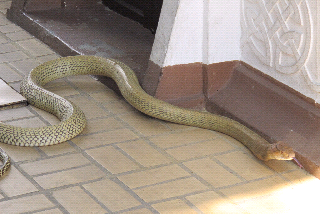 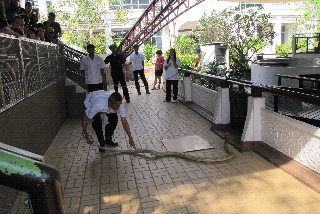 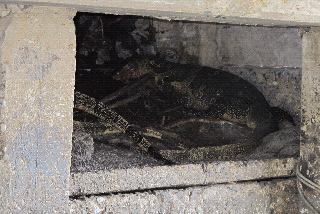 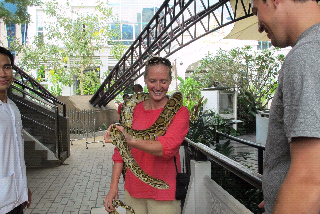 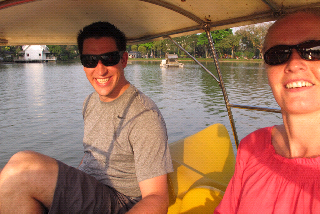 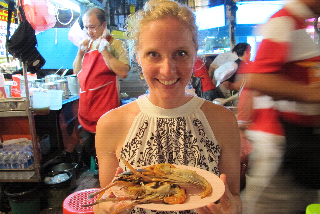 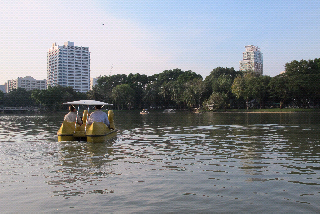 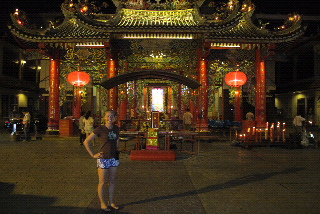 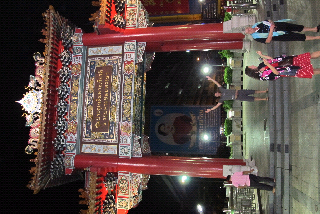 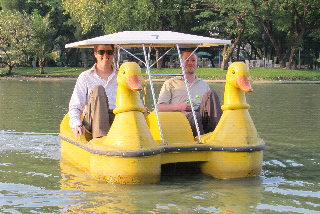 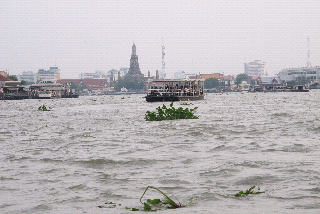