Amber:  We returned to Luang Prabang and found another guest house to settle into.  Tim and I were both feeling pretty ill, so it was an early night for all of us.  We took our passports to an agency that would transport them back to Vientiane so that we could get our Vietnam visas (a service that took two days to complete) and went in serch of some dinner.  I had delveloped a craving for lasagne on the trekk, so after a very dissapointing, flavorless lasagne we went to bed.  The next morning we got up and didn't venture far from our room during the day as we were both feeling poorly.  Justin and Joe wanted to take a boat out on the Mekong for some sunset photos and we joined them.  The boat we ended up hiring was rather silly how long it was for the four of us, but the driver was pleased to have our fair so off we went.  He drove us up the river about a half hour then we idled back, letting the rivers current push us downstream.  The sun set was perfectly timed with our hour charter and we all got some nice pictures.  That evening we joined Khan for some dinner at his favorite Luang Prabang resturant (all the pretty Laos girls go there) then Tim and I retired and the guys went off to the local disco.
Our guest house had not planned on us staying three days so after our first two nights we had prepaied for she appologized and told us that she had rented out our room when we attempted to pay for a third.  She was able to find us a room in her friends guest house for the same price that was actually far nicer than the room we were staying in.  The second guest house was brand new, it has opened that week.  It was clean, had a nice cross breeze so was cool, and the wifi worked!  I ended up staying in the room pretty much all day uploading pictures and working on taxes.  We had begun to take cypero, so finally our symptomes were getting better.  Justin was returning to Bangkok in the morning and Joe, Tim and I were traveling North to Nong Khiaw in search of more trekking so after dining of some really good lasagne at a different resturant we plaied a few games of cards and said good bye to Justin for a few weeks.
Our mini van ride to Nong Khiaw was not the most pleasant, but as it turns out, it could have been worse.  We got the back seat of a very cramped van.  There was no air conditioning, and the passangers with access to the windows/fan seemed to be quite cool with the windows only half open and the fans set on low.  In the back of the van, while we launched off of pot holes and sped around corners, we were quite hot.  Oh well, the ride ended up being only two hours and fourty five minutes thanks to the speeding of our driver... it was estimated to be four hours per Lonely Planet.  Other vans, we learned, had been over booked, so while Tim and I shared with one other passanger in the back, they had stacked four people in the back in another to accomidate the over booking.
Once settled into our guest house and taking a dip in the Nam Ou we went in search of dinner.  We found an Indian food resturant, but it was packed, so a friendly couple offered for us to sit with them.  While we sipped on Beerlao and planned our hike for our next day the couple informed us that they had just come from Vietnam and it was quite chilly there.  After talking some more and finishing dinner, they joined us at our guest house for some cards and we all made plans to meet the next morning to climb the mountain that is the 2,000' backdrop of Nong Khiaw. 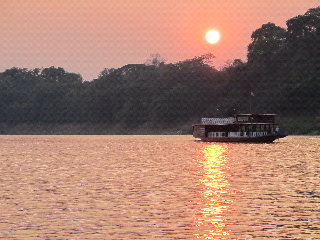 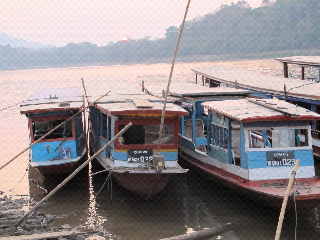 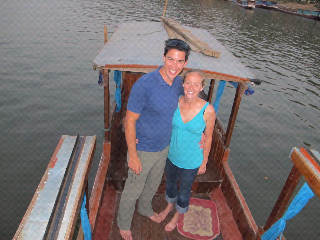 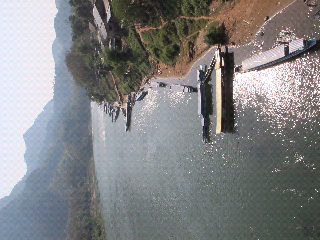 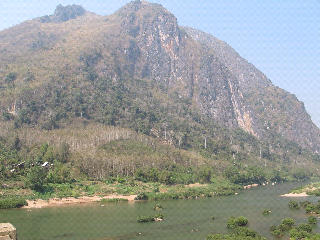 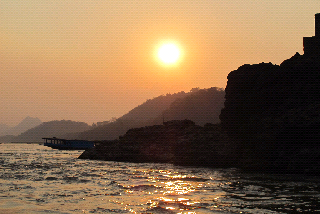 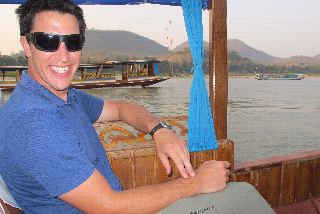 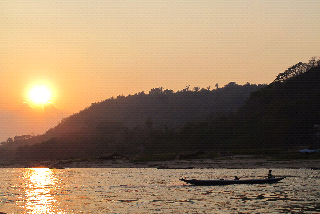