Tim: The last few days in Vang Vieng have been relaxing and super fun! Vang Vieng is definitely not an authentic cultural experience as it is a major backpacker hang out. The main attraction here is floating down the Nam Song River on an inflated truck intertube. It cost $6.50 to rent an intertube and get transported the 15 minute truck ride to the edge of the river. The first kilometer of the river's edge is covered with bamboo constructed bars that boast various rope swings, zip lines, and water slides. This makes for an exciting time. After two separate days of tubing, we have pretty much done every swing on the river.

The main part of the town is full of guest houses and restaurants. We are staying at a questhouse for 60,000 kip per night (US$8.50). We don't need aircon here as the humidity is fairly low compared to Bangkok and the temperatures are dropping to 72 degrees F at night. Most of the main restaurants either have reruns of Friends upisodes or Family Guy. Those are the only two shows you will find playing in the restaurants. There are also road side food stands that are very plentiful and they all serve the same thing: Bagette Sandwiches and European style pancakes. There has to be at least 40 of these stands in the town and they all serve the same thing. You won't find a kabab, or pad thai, or spring roll anywhere. Good thing the Bagette sandwiches are awesome and put Subway to shame. Amber's and my favorite sandwich is the chicken, bacon, cheese. We have eaten at least 4 each since we have been here.

We are relaxing today. It is a little overcast, and we are going to skip tubing today. It's a rough life!

Amber:  Our last few days have been so fun!  We ended up staying an extra day in Bangkok so we took advantage of the spas.  Both Tim and I got manicures and pedicures; the Thai massuses laughed at Tim as his feet were too big for the bucket to soak his feet in!  After getting all scrubbed and trimmed, they offered him any color and found it amusing when he declined.  I got as girlie as possible and went for pink toe nails and a French manicure.  From there, we both decided to get an hour massage as it had started raining and we had some time to kill before our train ride to Laos.  The next day, after safely arriving in Vientiane, we decided to do our vacation right and went directly to another spa.  I got the best massuse and after a few trips into the sauna, drinking some herbal tea and getting an hour massage, was content.  Justin, Joe and Tim concluded that while the herbal sauna was nice, they had all had better massages in the past.

We now are in Vang Vieng and love th Nam Song river!!  The first day we got a fairly late start but were able to float the entire stretch of the river.  I did my fisrt zip line and plunged into the river and it wasn't too bad.  In fact it was fun!  I was feeling very tough until I found out it was such a small zip line that Justin was considering not doing it as it was so... lame.  Oh well, baby steps!  From there we went to a few more bars along the river and did more zip lines and the 'slide of death' all that dump you into the Nam Song and then you cary on your way on your inner tube down the river.  All of the bars/rides are near the drop off, so after a while we were floating in a peaceful river, no more techno or buckets or screaming girls (me) going down a slide.  As we floated, we passed a group of five water buffalo, in circle formation, up to their ears in the river, relaxing.  It was awesome! 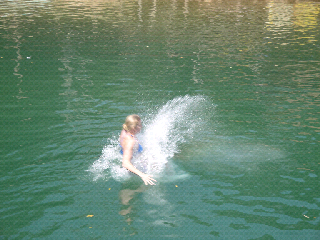 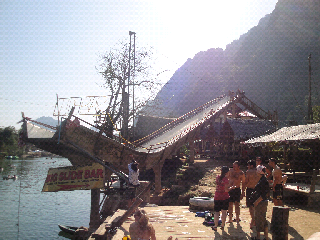 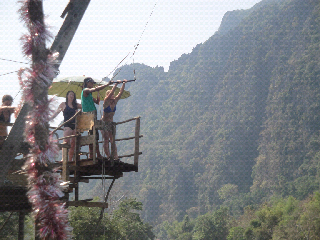 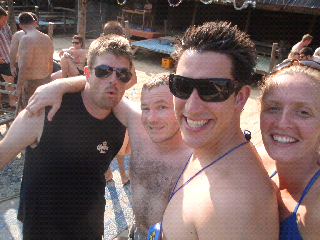 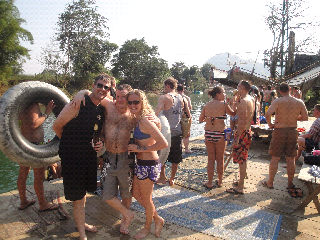 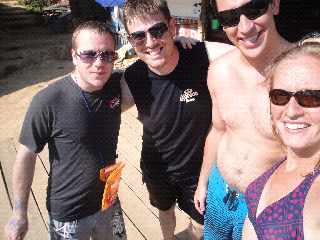 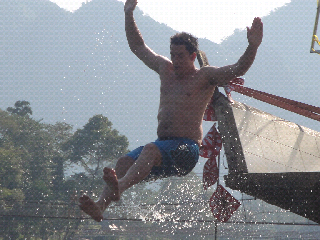 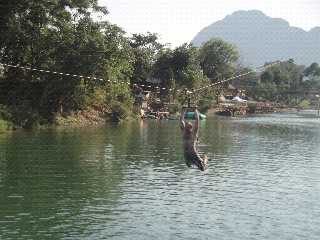 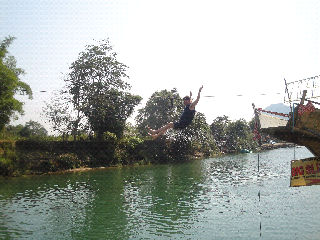 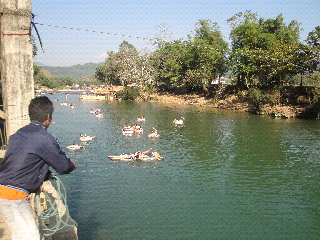 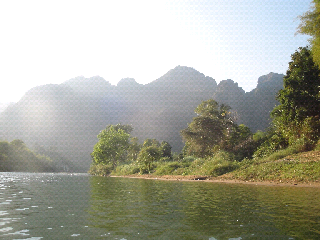 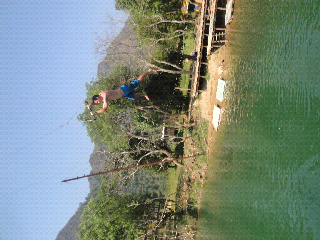