Tim: Our flight into Dubai arrived at about 5:00 AM. It took a while to get through passport control. All of the immigration officers were dressed in traditional white robes with white turbans. After loosing 12 USD to an automated ticketing machine that was out of tickets we found a ticket office in the metro and got tickets to the nearest metro to our hotel. We also found out that there was not much recourse for our lost $12. 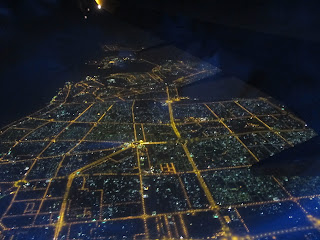 The first metro did not leave until 6:00 AM so we had to sit around for a few minutes waiting. Once we arrived at the station we did not know exactly where our hotel was and then my cell phone died that had directions. A young man that we ran into outside the metro station said he was staying out the other Sheraton Four Points in town that was close by. We walked to the Sheraton Four Points, Bhur Dubai and they gave us directions to the Sheraton Four Points, Downtown, about 1.5 kilometers away. We decided to walk with our backpacks on. It was early in the morning and the temperature was a pleasant 70 degrees. We arrived at our hotel at about 7:00 AM. They did not have a room that we could check into because the hotel was completely full. After napping in the lobby for a while and finding some breakfast we were able to check into our room at 10:00 AM. The Sheraton Four Points is a very 5-Start Hotel. We stayed four nights for free with our Starwood points that we got for signing up for credit cards. We were exhausted from our nighttime travels and slept until 3:30 in the afternoon.
In the evening we ventured out and found dinner. We visited the Dubai Mall which is the largest in the world. The mall was near the Burj Khalifa, the tallest building in the world which has the largest fountains in the world in front of it. The fountains were magnificent. There were shows every 30 minutes that included middle eastern music. The fountains were made by the same people that made the Belagio fountains in Las Vegas. The Dubai fountains are even more grand and spectacular. We watched three different fountain shows each with different music and design. 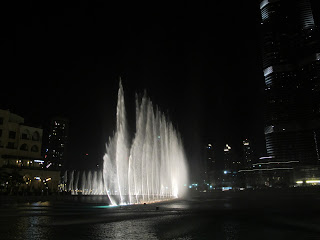 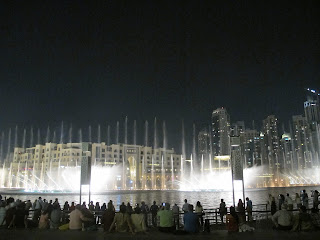 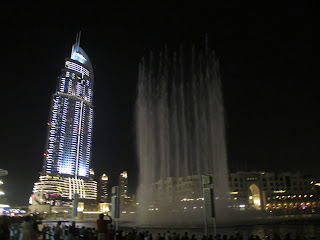 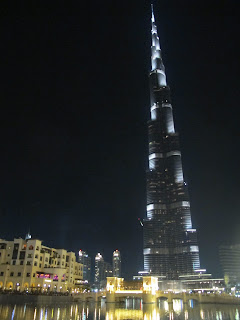 Our next day we spent the morning working out in the well-equipped fitness center and afterwards we visited the roof-top swimming pool. The warmest the air temperature gets right now was a pleasant 80 degrees Fahrenheit. In the afternoon we ventured down to Palm Island, the largest man-made island in the world. Apparently, you can see it in space with the naked eye. The island has the new Atlantis Hotel which is superbly designed. For the evening, we had set up an evening dinner cruise on the Dubai Creek. Our vessel was a two-story traditional Dhow. It only costs 15 USD per person after I found a discount offer online. We enjoyed the cruise very much and the buffet food was actually pretty good. This cruise included a live dance performance by a traditional male dancer who just spun around for 10 minutes strait. It was quite entertaining. 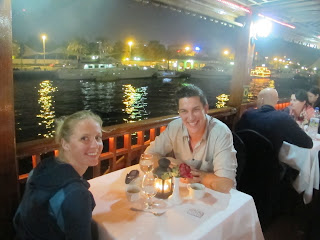 Amber:  Who knew that people from Alaska could have such a great time in a desert?  We had so much fun.  We went on a desert safari, which was ridiculous   Basically, we were picked up in a Land Cruiser and took off into the desert to go four-bying across the sand dunes.  The locals have made quite a business out of the event.  There were four wheel drive vehicles everywhere!  Among the organized chaos, our driver managed to not roll, flip or get stuck as we rallied around the desert.  We were close several times, and it was a little nerve racking to see other vehicles stuck, precariously high centered on the top of a steep dune. 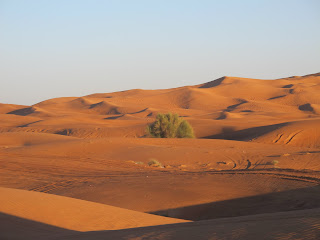 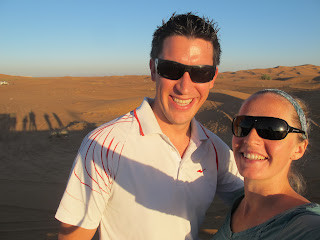 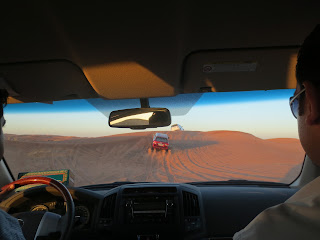 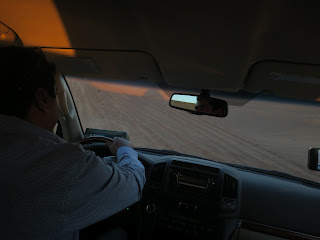 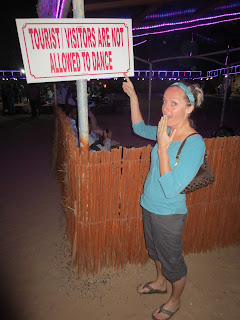 Tim loves really tall buildings.  We went to Taipei 101 in Taiwan last year (what was, before the completion of the Burj Khalifa, the tallest building in the world) and he was hooked.  We've been wanting to go to the Burj Khalifa ever since.  That, and it looks really cool in MI4. It stands 824 m tall.  It's pretty awesome. So, being as we were in Dubai for a few days, we of course had to go.  We booked our viewing for one pm, giving us enough time for a little work out and pool time before heading towards the tallest building in the world. We rode up a very smooth elevator, and were able to go outside to a viewing deck.  Cool!  Tim was brave enough to actually stick his head outside of the plexi-glass, all I could manage was holding on tight and inching my goes out the bottom gap.  We didn't go to the exact tallest point of the building , but the views were amazing, and the architecture, beautiful.  It was a fun day for sure! 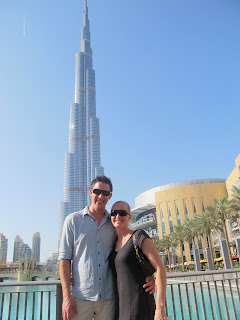 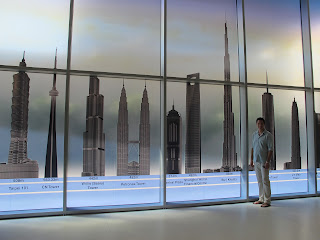 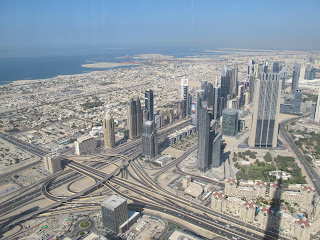 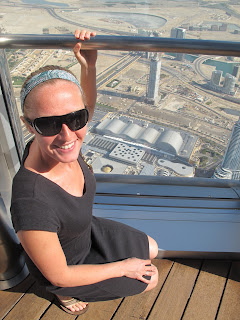 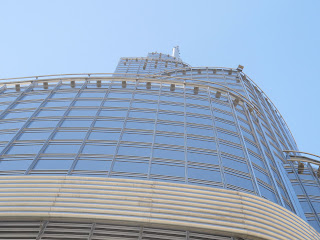 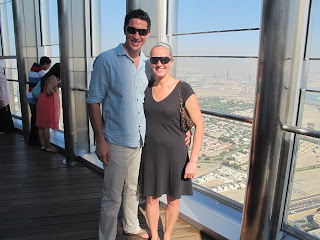 Afterwards, we went to a Couch Surfer meeting and met some wonderful people.  Both Tim and I had some fun conversations with some really interesting people.  Couch Surfers in general are really interested in travel, so we had a lot in common with everyone.  We became known as the "couple form Alaska"... we're kinda big deals, you know.  Ha ha. 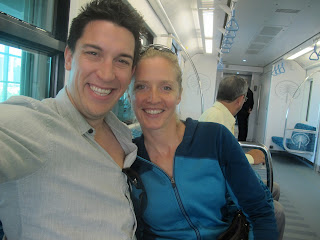 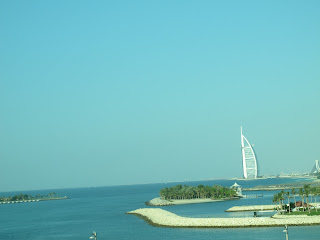 Our last day in Dubai we had to check out of our hotel by noon.  But our flight didn't leave until midnight.  So... we checked out after a very lazy morning, and then went up to the gym and worked out for an hour.  Then we went to the roof top pool and lazed around for an hour.  We finally got hungry and mooched a shower in the hotel gym, and went in search of food (this was at four pm) and some form of adventure.  We decided to go check out the Mall of the Emirates.  This is the mall that houses the indoor ski resort in Dubai.  We figured, we were here, we mine as well go see it.  We took a very long subway ride to the mall, and, of course, once we saw the hill, Tim got the itch to go skiing.  We were in flip flops and tee's and thankfully I had opted for pants, and not a dress. It was about $50 each for gear, including lovely matching outfits, and the lift ticket, so we figured it was a must as who knows when we'll be in a desert and be able to go skiing again?  It was really fun to suit up and go boarding, even if it was in a big freezer on man made snow!  We made about ten runs before needing to head to the airport.  It was hardly Alyeska, but the closest to skiing we've been in over a year.  It was so over the top ridiculous, we loved it! 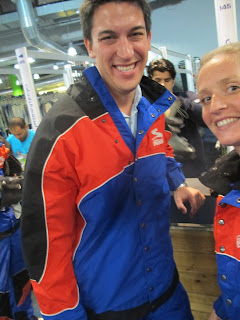 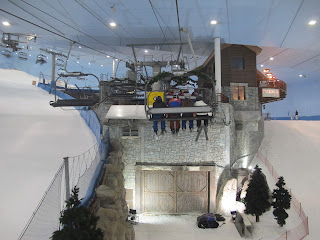 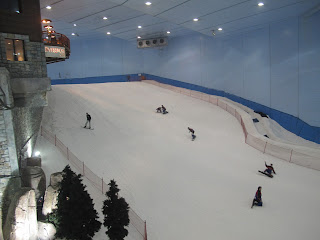 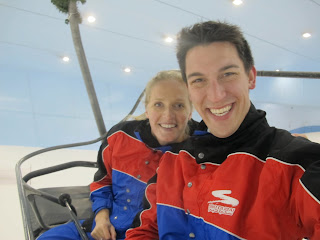 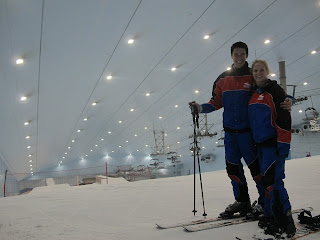