Mt Bromo and the bus ride from Hell

Amber:  Tim and I decided to book a bus tour to get us from Jokjakarta to Bali, with an evening at Mt Bromo, as the local train was fully booked until after the holidays.  We woke up early and scarfed down some street food before boarding our mini van at 8am.  The first stages of travelers tummy were starting to show, and I was not looking forward to the two days of travel we had ahead of us.  Thankfully, the first leg of our trip was fairly painless.  It is never fun to spend a day in a bus, but at least the mini van was empty enough for me to lay out on the bench seat, using Tim's lap as a pillow, make myself somewhat comfortable, and the air con worked.  I wouldn't have been  having much fun with the way my insides felt no matter where I was.  It was dark when we unloaded from our mini van into a little, cramped bus and made our way up the mountain to our hotel for the evening.  It was nine pm before we were settled into our room for the night, making it an eleven hour travel day. 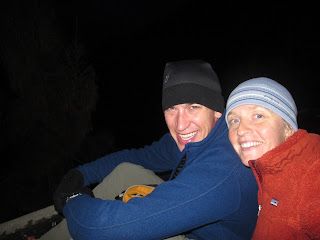 The next morning we woke up at three am and were taken up the mountain even further by jeep.  Our driver had to wrestle with the steering wheel the whole drive, constantly correcting to make sure we drove in a straight line.  Not that fun in the dark as we wound up the steep, narrow path.  We drove up a rutted out single lane road, four wheel drive doing its job, and our driver let us out and told us to make our way up the mountain by foot from there.  It was dark out, and both Tim and I had neglected to get our head lamp from our bags in the morning, but there were probably eighty to a hundred people hiking up the path with us, lighting our way.  There were also a bunch of locals, providing horses for people not wanting to make the trek.  I considered it, but basically, you get thrown onto a pony, and Tim's legs very well may have drug.  We would have felt bad for the animal.  That, and they just walk in front of you, leading your horse.  We made it to the viewing point well before sunset, so climbed up onto a little cement structures roof and enjoyed the view as the locals crowed around and... took our picture. 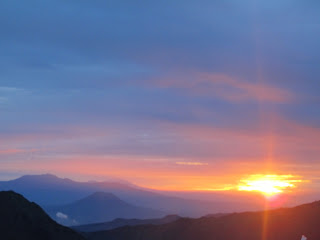 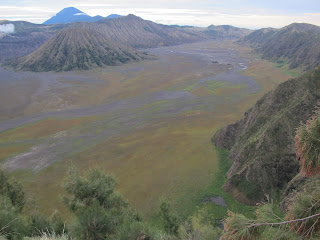 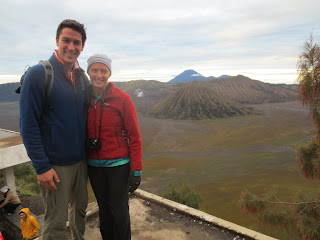 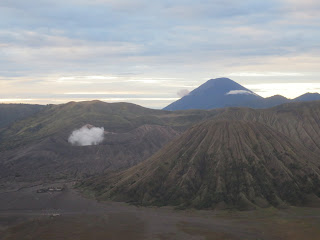 Sunrise finally came, and the view down into the crater was beautiful.  Mt Bromo is actually a tiny blip in the middle of a huge, ancient volcanic crater.  One that was so huge it probably put the Earth into an ice age when it went off, we hypothesized.  We were sitting right on it's edge.  After getting several photos, we made our way back to our jeep and then drove down into the ash field that surrounded Mt Bromo.  The line to go up Mt Bromo was ridiculously long.  We hiked up the path, doing our best to avoid the horses that galloped past, their riders in search of more tourists to haul up the trail. 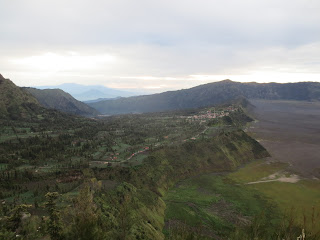 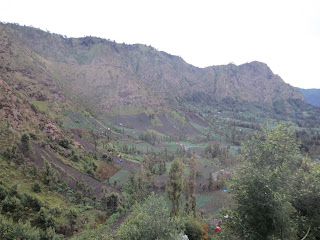 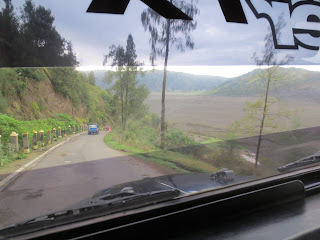 Once we made it to the top of Mt Bromo's crater, it was awesome.  Neither of us have ever been on the top of a volcano, let alone one that is still spewing ash.  It was scary, amazing and beautiful!  We hiked along the rim away from the crowd.  Tim is very brave.  I hate heights, even when falling off into a giant, vapor spewing pit isn't a possibility.  Tim compared it to the pit in Star Wars where Java the Hut throws his victoms.  I inched my way along the rim after Tim, assuring myself that I wouldln't just trip and fall normally, so why would I start, just because I was going to die if I did? 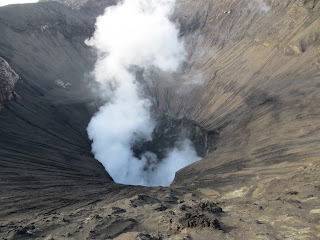 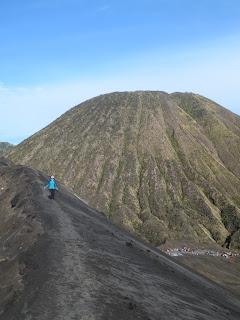 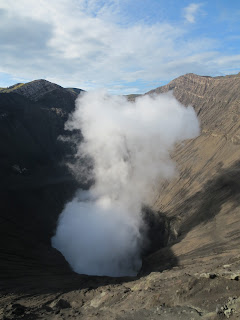 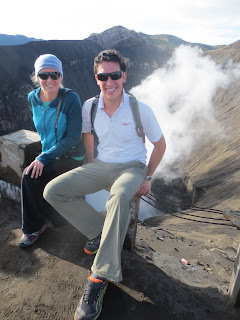 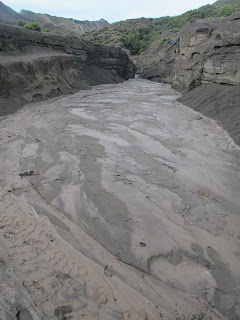 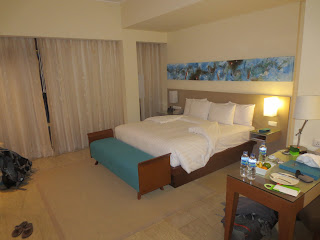