Tim: On our way back to Munich we needed to stop somewhere to break up the driving into two days. We decided on Bled, Slovenia as it was about half way and an American lady we met in Croatia said it was a beautiful place. We arrived midday to our apartment. Online we had booked the cheapest of the apartments at the place we stayed that was supposed to be a lower level apartment with only half windows because it was 6 USD a night cheaper. We were shown to a two bedroom apartment with a separate kitchen and living room and its own washing machine ( a big plus). It was about a 700 sq. ft. apartment and we paid a little of 50 USD a night.
The weather turned for the worse by early evening. This included torrential rain and strong winds. We went grocery shopping which always seems to take an hour. This is because going into a foreign grocery store is a whole new experience. Everything looks interesting. Most items are labeled in a different language, so it is often difficult to figure out what you are looking at.  After going grocery shopping we made a gourmet dinner of honey mustard chicken breakfast on a bed of grilled onions with mash potatoes and grilled zucchini. Later we watched a movie while doing three loads of laundry. The large apartment was a nice place to relax.
The next day the weather was still rainy and windy. We decided to finally get out of the apartment in the early afternoon. When we stepped out of the apartment we noticed lots of fresh snow on the mountains. We drove around the beautiful Bled Lake which as a small island in the middle of the lake that has a church on it. This is the only island in all of Slovenia. Slovenia is landlocked. There is also a majestic castle on a hill with cliffs above the lake. Then we drove to a waterfall at one end of a different lake. At first we thought the trail to the waterfall was closed because there was a sign that said, “This Way is Closed.” The trail had been partially washed out by flooding and what was originally a two meter wide trail had a section that was only 1.5 feet wide that fell off into the river 25 feet below. After watching some people continue along the trail we did as well. Turn the trail was actually closed, but we went on anyway. The waterfall was only a 20 minute hike up the trail. It was beautiful. We took a few pictures then headed back. 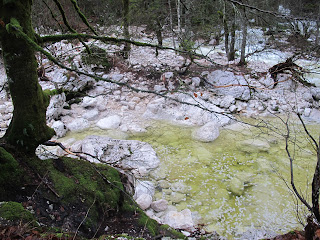 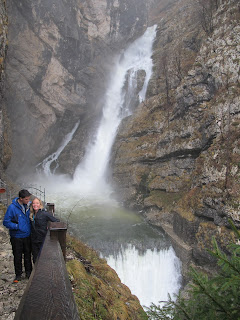 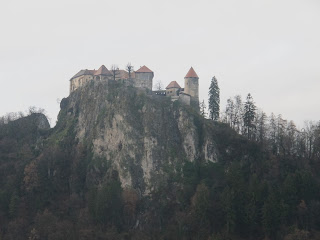 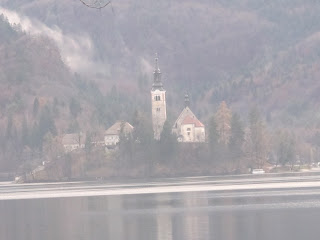 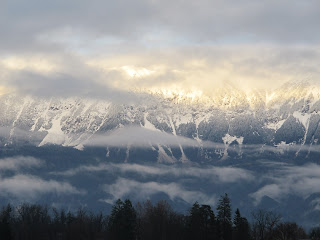 We only had the two nights in Bled, Slovenia. The next morning we got on the road by 7:00 AM to ensure that we would reach Munich by noon when our rental car was due to be returned. The drive was slow due to snow and ice. The temperatures dropped as low as 30 degrees Fahrenheit. This was the first snow we had seen in almost a year as we had missed the winter in Anchorage after January 2012.
Posted by Unknown at 12:50 PM