Amber:  We landed in Jakarta, Indonesia after an eight hour flight from Dubai on Yemenia Air.  Aside from unruly, screaming children, (there seemed to be a lot on this flight) and people not adhering to common flight safety (children not buckled in and standing in their seats while landing, seat backs fully reclined during landing, not even done taxing before crowding to get up and unload the over head bin), the flight for Tim and I was uncomfortable, but uneventful.  We hit a tiny surge of turbulence during landing, and the whole plane screamed.  Tim and I exchanged smirks   They would not like an average day in an Alaskan bush plane.

Passing through the Indonesian customs was a little confusing.  It was a three step process, which was easy once we figured out where each step was, and which one we needed to do first.  You can officially get a sixty day visa on arrival in Jakarta, but we weren't sure until we arrived, so we are leaving after thirty.  We got our Indo visa and passports stamped and both Tim and I heaved a sigh of relief.  We still had room for one more visa!  I feel like we have almost joined the big kids club for travelers, as both of our passports are dangerously close to not having a single page left.  Tim has exactly one page, I have two.  We can go one more place before needing to go to the American Embassy and get more.  Myanmar, after our thirty days in Indonesia are up, here we come!

Our first two nights in Jakarta we stayed at the five star Marriott.  Which was awesome.  Actually, it was a little unnerving.  Five star treatment is not what we are accustomed to, at all, in our budget backpacker experience.  It was a little overwhelming.  We were greeted, ushered in, sweaty and wrinkled from our flight, bus ride and cab ride, and lead to our beautiful room, on the twenty fifth floor.  Tim had earned us two free night stays at the hotel by signing up for the Marriott credit card, and then forcing me to do so, as well.  The fifteen minutes I spent signing up, after much coaxing from my very savoy boyfriend, was totally worth it!  The room was huge, there was a shower and a Jacuzzi,  it was cool and clean and had the most comfortable bed ever, a soft fuzzy robe... I felt like a spoiled princess.

We spent a lot of time in Jakarta trying to get our visa to Myanmar worked out, but the Myanmar Embassy in Jakarta is a little less than helpful.  We went to the embassy, and found we didn't have all the necessary things for our application.  After spending hours on trying to get everything in order; passport photos, a letter of sponsorship(?), hotel reservations when we arrived, writing up a loose itinerary, we rushed back to the embassy.  It had closed thirty minutes prior, which meant that we would now have to wait until Monday, and even then, we would still have to wait the three days to get the application processed (where it may or may not be approved).  More than a little frustrated by our lack of progress on achieving an actual letter of sponsorship (Tim booked us a hotel in Yangon for the night we arrived and hoped that would suffice) and not wanting to risk it, we finally just utilized an online website that did not require the letter to get our visas processed.

I was a little grumpy (yes, I'll admit it) after the finally getting the whole Myanmar visa process somewhat taken care of, so when Tim wanted to go to a Couch Surfers meeting, I suggested he go alone and I stayed in our new, not so new, very modest "fan" room and sat on our hard, lumpy bed and researched our future destinations on Java.  It was nice to feel productive about the rest of our thirty days in Indonesia, instead of just going in circles for the Myanmar visa!  Tim had a great time at his meeting, he even had to stand up and talk in front of a bunch of people with a microphone about his traveling experiences.

He met some locals that were going to go sing Karaoke later in the evening.  He came back to our room, bearing a chocolate ice-cream bar, my favorite.  Did I want to go?  The Karaoke was fun.  We met some really nice people and they all, of course, could sing.  Tim can sing.  I was the only one that hid in the corner as long as possible, then croaked into the microphone when politely forced by our new friends.  My attempts were as bad as I was afraid as it would be, but it was all good fun.  Tim chose Ozzy's "Dreamer", and the theme song from the Twilight series... how sweet!  I'm always impressed how musically inclined he is. He is in charge of singing from here on out!

Afterwards, we joined Ivy, Raja, Tobey, and Lukey for some street food.  While there were many options, Tim and I shared tuna and rice, grilled in a banana leaf and then slathered in curry.  We also had a dessert made of coconut, bananas, a locally made jello, all served on shaved ice in coconut milk. It was delicious.  We have found that when we travel and then meet up with people, we eat way too much, but it is the best way to try all the local favorites! 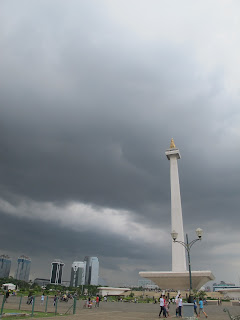 The next day, Ivy met us at a restaurant near our hostel and we tried a soup filled with cow lung and liver, served with lime and spicy chili over rice.  It was interesting.  Ivy took us to the old Dutch part of town.  We rented bicycles and went down to the docks and watched men working hard at loading cement bags from heavily loaded trucks onto ships.  The whole harbor was loading up.  It looked like back breaking work!  From there, we peddled back to the Dutch part of town, admiring the big cement balls that lie around that used to be shackled to prisoners feet.  We were right in the middle of traffic, on our brightly colored one speed bikes.  It was crazy, casually biking along as motor scooters and trucks zoomed past! 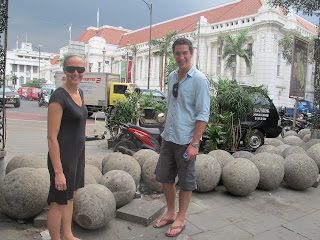 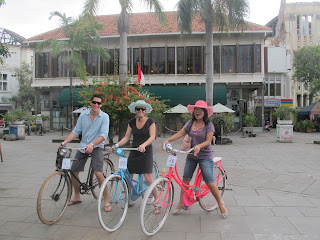 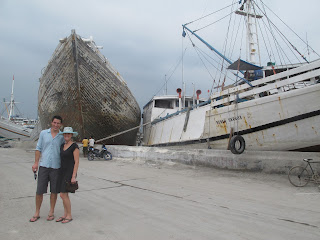 We took an hour bus ride in rush hour traffic to go see where Obama went to elementary school.  It was funny, we squeezed onto the public bus and rode smooched on board.  Tim towers over everyone in Indonesia, he felt like he should have to pay double fair! We switched buses to make the final leg to Obama's school.  The second bus we got onto was so full I hung onto a handle at the top of the steps, just barely all the way into the bus, as we drove on down the road, door open and the driver stopping to pick up more passengers   Three more people squeezed in, we all perched on the steps while we made our way through the crowded Jakarta traffic. 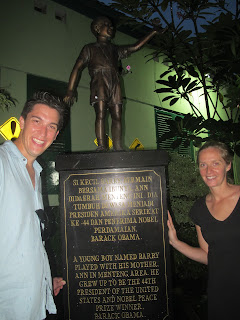 We had some street dim sum sitting on the steps of a bank while waiting for the rain to clear, then met Raja for dinner at Block M, a place known for its street food.  We ended our meal by trying some ridiculously good fluffy, fat pancakes, stuffed with oil, peanuts and chocolate.  It was almost one am by the time we went our seperate ways from Ivy, our fabulous host for the day.  Our five am wake up for our train to Jogjakarta was going to come way too early! 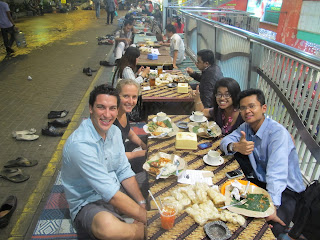 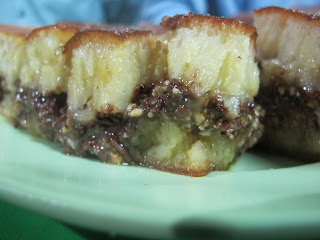 Tim: When we arrived at the Marriott there was alot of security with steel barriers to keep cars and motor bikes out as well as metal detectors, xray, and 8 or so security personnel. The security was so tight, that they opened the doors to the cab and looked inside the cab as well as the trunk. On our walk in, I asked one of the staff why all they security. They mentioned a bombing in 2004, but assured we were very safe. It was until doing some research later, that I realized that there were also bombings in Jakarta in 2009 and they had occurred at the JW Marriott and the Ritz Carlton across the street. We didn't feel any less safe and enjoyed are stay in the 5-star resort. It was just an interesting coincidence.

During our first day wondering around trying to get our Myanmar visa in order, there was a huge thunder and lighting storm with torrential rain. We found some cheap umbrellas for 2 USD each and were moving around the streets. The thunder and lighting kept getting closer. There were lighting strikes within a few hundred meters of us. The cracking lighting and thunder was so loud it hurt, and your whole body shook as the sound bounced of the skyscrapers. We were near a mall at the base of a sky scraper. We walked out from under the ledge with our umbrellas when a bolt of lighting lit up the sky and stuck the radio tower on top of the building immediately next to us. The noise was deafening. We were startled to say the least and quickly lowered our lighting rod metal umbrellas and ran back under the covered ledge. This was probably the closest I have seen lighting strikes.