Amber:  We drove north from Slovenia towards Munich, Germany.  It was a beautiful drive.  We wound through the foot hills to the Alps where huge snow flakes began to fall around us.  I was so excited!  Snow!  For the first time in almost a year, we were in falling snow flakes.  The farmland gave way to forested mountain, and the snow got thicker.  It was actually sticking to the road.   Tim got pouty.  Maybe we should have left Europe a week sooner.  I was happy, we had planned it perfectly!  The long underwear, hats, mittens, and coats we had been packing around would come in handy before we flew south.  Really handy, as it would turn out.  And it would make the sand, sun and flip flops that much sweeter when we arrived in Indonesia.
We actually did not drive over the Alps.  Instead, we paid a ridiculous tole, about 10 E, to dive through a really, really long tunnel.  It was about 8 km long.  It put the Whittier Tunnel in Alaska to shame!  Once we reached the other side of the tunnel, we started losing elevation, and the snow went away.  By the time we reached Munich, Tim was especially happy to see no snow.  We got there just in time to return our rental car at noon.  We cleaned it out as best we could, considering we had had it for nine weeks, and crossed our fingers that they wouldn't notice the scrapes on the passengers side front hub cap that were acquired in Greece while parallel parking.  So far, so good!  Nothing was said when we dropped it off, and no mysterious bill has found us.
We had arranged to stay with our Air BNB host from Oktoberfest, Flo, again this time around.  We met him at the metro station and he gave us the key to his flat.  We took a small nap as we had gotten up at 5:30am to make it from Lake Bled to Munich by noon.  We met up with Nadine, a girl we had met while doing Ride Share from Munich, Germany to Verona, Italy two months prior.  She had offered to show us the real sights of Munich, as we had failed miserably during Oktoberfest to see anything but the inside of the festival and Flo's flat.  We had arranged to meet Nadine and a few of her friends at a Mexican restaurant.  You can imagine Tim's delight when he found out that there was a happy hour, we were there for it, and that it included the "giant" drink selection.  They were indeed huge, and actually pretty good.  Tim brought over a round of tequila shots as we all finished up dinner and we decided to move on to a mulled wine festival.  It was much like Oktoberfest, but smaller tents and with hot wine.  We stood out in the cold, sipping on the hot spiced wine from mugs, talking with Nadine, Mustafa, Matia, and Raphael.  What a great way to meet new friends! 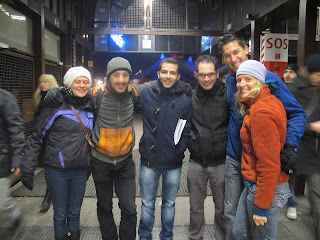 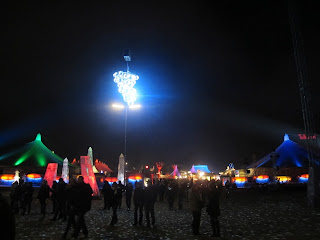 The next day, Tim and I donned all our warm cloths and saw a few of the touristy sights Munich has to offer.  We went to Marianplatz and went to the Christmas fair.  Which was awesome, Christmas decorations for sale, mulled wine, Bratwursts and traditional German food stalls, and lots and lots of people.  It was freezing, but we had heard about the Old Town Halls clock that had a cool dancing puppets timed to the chiming of the bells, so joined the crowd all looking up at the clock tower.  It struck noon, and it was a fun sight to see all the scenes get acted out. 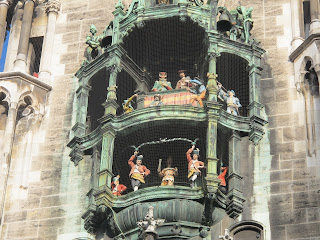 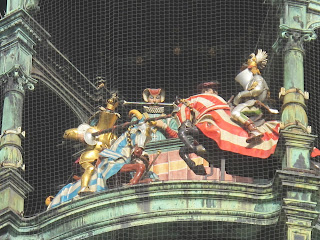 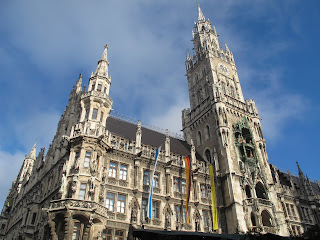 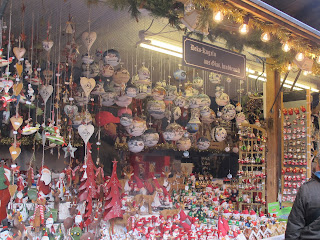 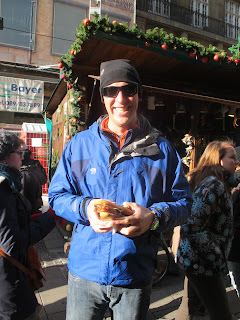 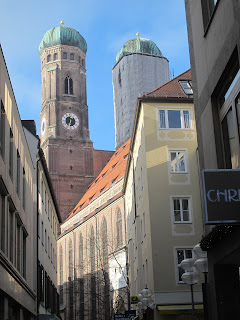 Afterwards, we met up with Nadine and watched a 'football' match at a pub.  Once the game was over, Rafael met us at a traditional beer house.  The food was very German; sausages and more sausages, sauerkraut, big salted pretzels  bread pudding, pilsner.  It was interesting, one of the traditional sausages we tried was a little (lot) like spam, but it was fun to try. And we were in a fun beer hall, surrounded by fans of the 'football' match, all supporting their teams colors and quite jolly.
The next morning Matia, Nadine and Raphael met us for a tour of the BMW facility that Raphael works at.  He showed us the not yet released electric car that was, as it turns out, featured in Mission Impossible 4.  We saw Rolls Royce, lots of beautiful BMW's, and Mini Coopers.  We even got to sit on the BMW street bikes!  It was awesome!  We were also shown the Olympic village from 1972, and then hiked up to the top of a very cold, icy hill in the middle of the city.  It was a nice hike, and gave very pretty views.  During dinner, it began to drop big, fat, fluffy snow flakes.  We finished up our time with our new friends drinking more mulled wine, and then got onto the subway back to our home at Flo's to get a good nights rest.   We had found it cost the same amount to fly directly to Indonesia as it was to take two long lay overs in Istanbul, Turkey, and Dubai, UAE.  We opted to take the opportunity to see more of the world, for four days at both Istanbul and Dubai.  The end of snow and cold in Munich was the beginning of our next adventures for our trip! 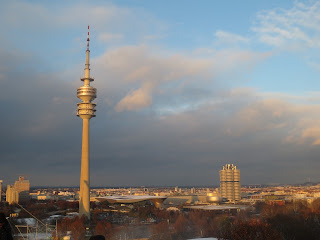 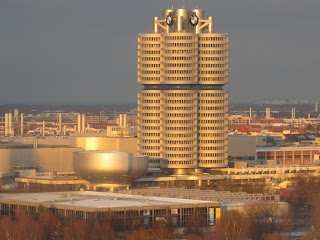 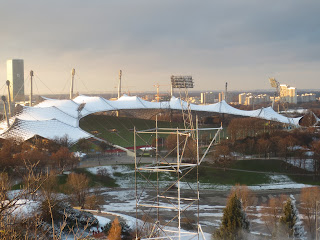 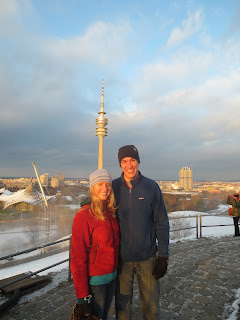