Tim: We flew on Pegasus Air for our flight to Istanbul. Pegasus Air is a Turkish air carrier with many international flights all over the region. We arrived at the SAW airport outside of Istanbul at 5:00 PM. Getting through passport control took a few minutes as we did not realize that we had to go to a different line first to purchase a 15 Euro visa. There was no screening process, just pay the 15 Euro and immigration put a postage like stamp into our passports. The SAW airport is some 55 kilometers from the downtown of Istanbul. We had researched a private bus company that did shuttles from the airport. We found Havatas the shuttle company without any difficulty. Our fair to the main Taksim Square in Istanbul costs us about 7 USD each. We began our bus journey at the peak of traffic hour so traffic was one large jam. The bus ride took us about 1 ½ hours to reach Taksim Square. After reaching the square we have to navigate to a different tram station by a funicular tram that lowered us down the hill to the Kabatas station. From here we went four stops on the above ground tram to Serkaci Station then an 800 meter walk to find our hotel.
We stayed in the main tourist area and old part of Istanbul. We were located very close to the main tourist sights. Istanbul is a city of more than 13.5 million people which makes it the largest city in Europe. The city is located at the point where the European continent meets Asia. The narrow Bosphorus Strait connects the Black Sea with the Mediterranean.
The area near our hotel was very touristy with many tourist restaurants that have men standing outside the front of the restaurants trying to convince you to come inside. The constant barrage of these hecklers gets quite annoying. As you walk by many of them step out in front of you and partially block your walking path. They call out things like, “Please, come inside.” “Where are you from.” “For two persons?” “Why not eat here? “In general, when I am asked by someone outside to go into a restaurant my first thought is to NOT eat there. This means that they obviously do not have a reputation good enough to attract people on the merit of their food. This also is complete giveaway that this is a tourist restaurant. I really wonder how effective this method of advertising is. I have not been convinced a single time to eat a restaurant because of the man standing out front. And it is always a man, we have yet to see a woman doing this job. I will note that Istanbul is the only place where this is common. This was very popular in Italy and Greece, and we also did our best to avoid these restaurants when possible. Even in Italy and Greece it was always men doing this job. Why is that?
We found our hotel at around 8 PM and after getting settled we found a place to eat. It was one of those touristy places, but we had little choice because the only restaurants open at 9PM around our hotel were the touristy ones. We had a local Turkish dish that was similar to chicken pot pie with rice. We opted to not have a beer because they were rather expensive.
The next day the weather was rather poor. It was raining and windy. We did not make it out our room until after 11:00 am. We visited three of the biggest tourist attractions in Istanbul which were both within 10 minutes walking of our hotel. First we visited the Basilica Cistern. This was basically a huge underground water reservoir built in the 4th Century AD. The Basilica part of the name comes from the fact that there use to be a basilica domed building over top of it. Nowadays you would not know that there is anything down there because the city is built right over top of the cistern. The cistern was built for the purpose of storing water in case of a siege on the city. The water was transported by an aqueduct that stretched many kilometers to bring water from the nearby mountains. If an invading enemy cut off the water supply to the aqueducts there would still be a backup supply in the cistern. The cistern still has water in it today only a foot or so. Once you walk down the dark flights of stairs that lead you below ground in the dimly lit area there are rows and rows of pillars 5 meters high supporting the arched ceiling. It is surprising how large it really is. Today there is a boardwalk that allows you to walk around inside. At one time the cistern was full of water. The most interesting part of the Basilica Cistern is the two stone Medusa heads found in one corner. These two Medusa heads are carved from 1.5 meter cubed stone blocks. These Medusa blocks make up the foundation stones for two of the pillars that support the ceiling. One of the Medusa heads is set sideways and the other is upside down. Scholars do not really know why they were put here and set this way. 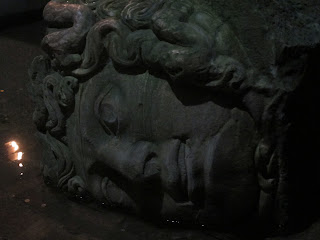 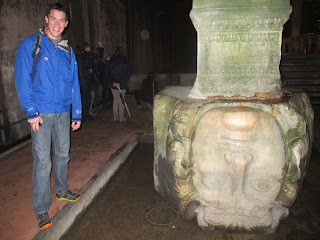 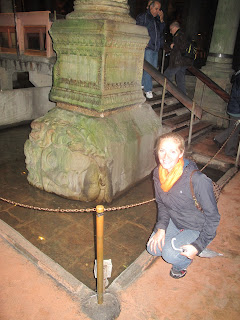 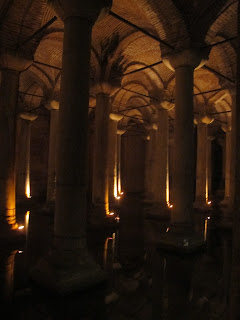 Next we visited the Blue Mosque. This is one of the largest and  the most beautiful mosques in Istanbul and the world. We were able to go inside after removing our shoes. As a side note, there are many many mosques in Istanbul. One cannot use a mosque as a point of reference because every 500 meters there is another one. And many of them are huge; way bigger than even a large church found in the U.S.A.  There must be at least 8 stadium sized mosques within 4 square kilometers of the old town. 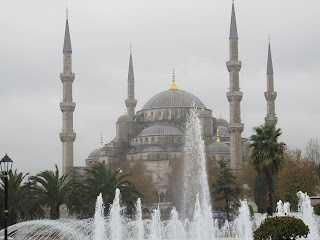 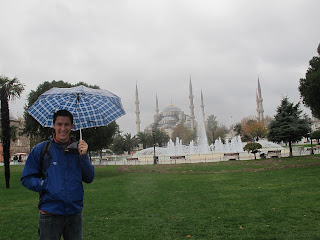 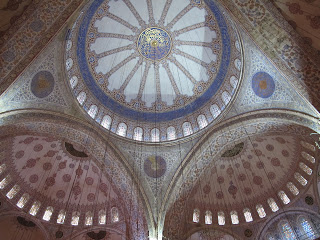 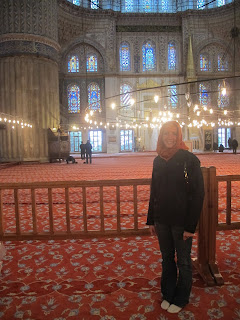 Right across the ancient hippodrome is Hagia Sophia. This was originally constructed in the 4th century, but burnt down several times. The current structure was built around 627 as a church. It was the largest Christian church in the world. After the Ottomans took over the city in 1435 Hagia Sophia was converted into a mosque with the addition of the standard minarets.  This really is a beautiful ancient building that is largely still intact from its original 7th century construction. 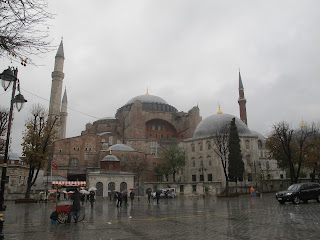 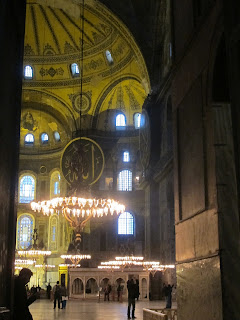 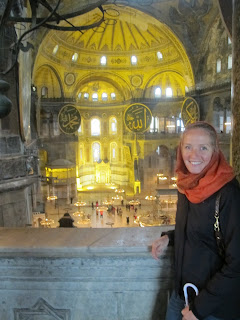 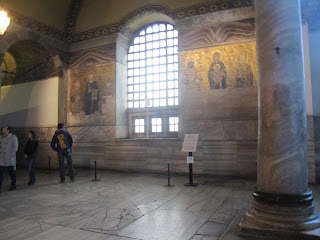 The hippodrome was an ancient horse racing track in Roman times. During those times, the Roman emperors liked to have monuments line the middle of the hippodrome. There were two monuments of particular interest. The first was an ancient obelisk carried off from Alexandria Eygpt that dates from before 500 BC. The second item was of particular interest to us because we had seen where it was originally placed. The Bronze Serpents monument that consisted of a tall bronze sculpture of two large serpents spiraled together was originally placed at the temple of Apollo in Delfi, Greece pre-500 BC. This monument was placed in Delphi as an offering to Apollo by the Greek people for their victory over the Persian army.  This was carried off to Istanbul as one of Rome’s conquests as well. Today only the lower section still exists. 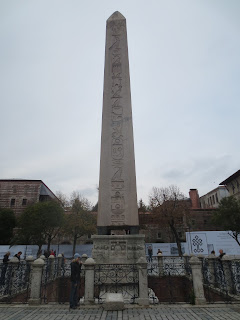 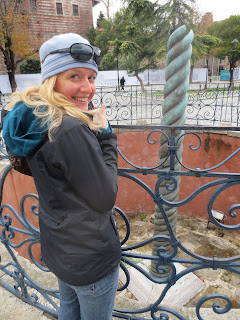 On a Wednesday night, we attended the weekly Couch Surfing meeting in Istanbul. Istanbul has a very active Couch Surfing community. We had the opportunity to meet many very nice locals over a few beers. The meeting was located on the Asian side of Istanbul. We had to leave the meeting early to catch the last ferry back to the European side. 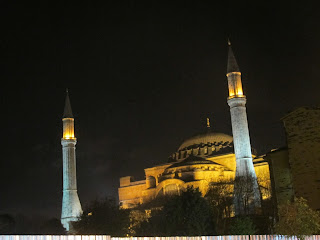 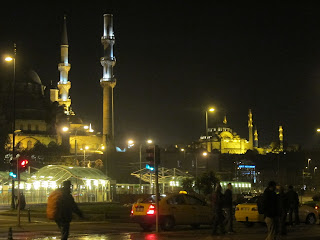 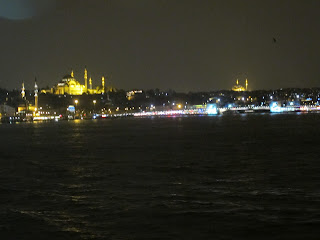 We also visited the Topakido Palace. The home of the Sultans until the 18th Century when a new palace was built. The old palace is not a museum. Most of the castle was not very interesting accept of the holy relics exhibition. The exhibition included many holy relics from the Prophet Mohammed. Probably the most important was the mantle of the Prophet Mohammed which was often carried to battles to give moral to the soldiers. Other relics included vials of the profit’s beard, a tooth that was knocked out during a battle, and the Prophets personal seal. There was also several swords said to be the Prophet Mohammed’s. Some of the more interesting relics were actually those said to be from Abraham, Joseph, and David (King David). There was Abraham’s bowl of some sort, Joseph’s turban, and King David’s sword. Oh yeah, and Moses’s staff was on display as well!  Maybe I am a skeptic, but I have to doubt the authenticity of a few of the artifacts, but you never know. I was not totally clear on how all of these relics ended up in Istanbul, but it had something to do with Mecca getting invaded during WWI and needing to move the relics. 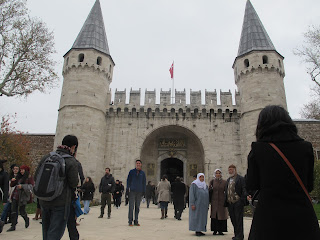 What I think is really interesting about the difference between Islam and Judaism is that Islam branched off from Judaism at Abraham’s two sons. Abraham’s first born son was Ishmael. Islam follows the lineage of Ishmael who the Prophet Mohammed is descended from. Judaism goes with Isaac, the second born son. The Islamic version says the Hagar, Ismael’s mother was Abraham’s wife. The Judaism says that Hagar was a concubine or Abraham and that Sarah, Isaacs mother was the only wife of Abraham. Interesting…
As I am writing this now, we are flying towards Dubai and are currently flying of the Tigris and Euphrates rivers in Iraq the home to the Fertile Crescent where the Garden of Eden for Adam and Eve is said to have been located.