Amber: We drove north along the coast to Split.  When we arrived, we were unable to locate where, exactly  our hotel was.  Our GPS had lead us to the spot where our hotel was supposed to be, but it was an unmarked apartment building. We finally found a cafe and were able to use their internet to Skype call our host.  She was a little flustered, and with the help of our berista, we were able to locate where we were to meet up.  Our host was indeed at the building we had driven to, but we would be staying at a different one, so she got into our car with us. She directed us through Split until we found the correct location of the apartment.  Having found that eating out was expensive in Croatia, Tim had explicitly booked a room with a kitchenette.  The woman spoke little English, so expressing this to her didn't go well when we arrived at the room and there was only a plug in tea pot.  We shrugged and payed her and she left. It wasn't long before Tim ended up calling Booking.com.  They were able to get us a new, better room, with a kitchenette, for the price of the one we had originally booked. Go Tim!
Once settled in our new home, kitchenette included, we were hungry so... went out to eat.  We found a cute little restaurant where our server spoke with us about Obama, Romney, politics, taxes, etc while we ate seafood risotto and fresh fish, paired with their house white vino. The owner took a liking to us, so sent us a second craft of wine.  We love Croatia!
Split was very mellow.  We enjoyed walking around the old city and viewing the Diocletian's Palace, running along the trails that followed the sea, and even jogging up the small hill behind the city. 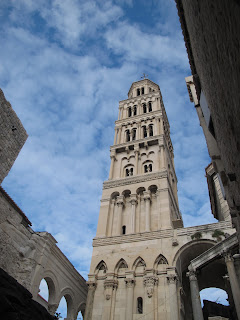 The bell tower located next to Diocletian's Mausoleum 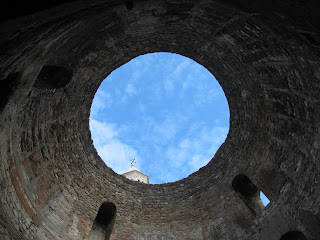 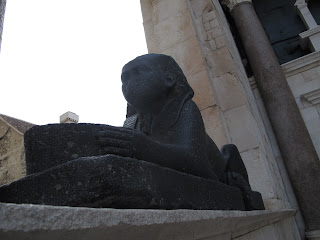 Ancient Sphinx from the 15th century bc located at Diocletian's Mausoleum 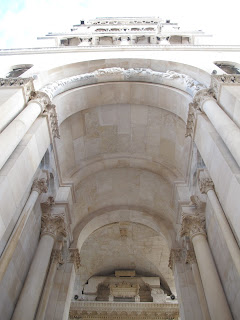 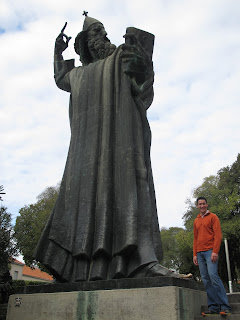 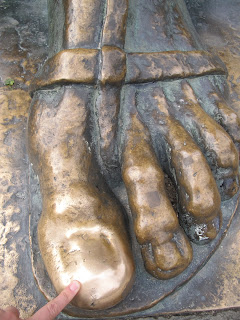 Tim: The old city of Split is located in the remain of Diocletian's Palace built around 300 AD. The palace was built for Diocletian after his retirement as Roman Emperor. He is the only Roman Emperor to have officially retired. Today the old city exists inside of the original palace area. Diocletian's mausoleum still exists although it was eventually converted into a church. The mausoleum stands in the middle of the city. Much of the city walls have been rebuilt over time, but some of the sections are still original. The wall is wide enough in some areas for people to occupy the interior of the walls. One the side of the palace that faces the sea, there is a large promenade with many cafes and restaurants. Some of the cafes are built into the original wall.