Amber:  We bought our first two bottles of aloe and after sun lotion after spending all day soaking in the 84'F clear sunny skys yesterday.  I began my day reading Rolf Potts's "Marco Polo Didn't Go There" pool side while I waited for Tim to get up, then we went and had the best coffee I've had in Thailand while briefly catching up with my sister on the phone.  As it was so hot out, even at 10am, Tim and I found a resturant with a fan and 50% off pastas on Sundays!  It was a coincedence about the coffee, but after drinking 7/11's coffee, this was an amazing espresso!  We decided that the best way to cool down was to drive around on our motor scooter, hoping that 30mph would create a bit of a breeze while we toured the island.  We found a beautiful overlook, but the road was so steep that the motor scooter didn't have enough guts to drive up the incline with both Tim and I on it, so I ended up huffing and puffing up the hill to enjoy our first view point.  I have got to learn how to drive a motor scooter so Tim can hike and I can drive!!!  We decided to go up even further, and ditched the moter scooter.  The incline was the steepest road or even trail Tim and I have ever seen, it was like doing Flat Top but with no switch backs, in flip flops and blazing sun!  We finished our climb by going through the jungle up a rickety wooden latter and ending on a huge granet rock face that was too steep to continue on in sweaty flip flops.  The view was amazing and a good vantage point to see our dive sights.
We were supposed to meet up with Ricko, Justin, Joe, and Fai and go to Shark Bay, literally in search of sharks to swim with, at two, but got a text from everyone but Joe saying they were a little under the weather, so wouldn't be venturing out into shark infested waters.  At this point, we were hiding from the sun in our room and had discovered pixar movies playing on the tv!  I would have happily nestled in and finished Indespicable Me but Joe called and still wanted to go snorkeling, so we ventred back out into the sun, 15spf liberally applied.
Shark Bay is beautiful in itself, but the fact that we were going to go find some sharks and go swim with them was so cool!  We rented some fins, snorkels and a mask and hiked down to the ocean.  Finding a nice little beach to stoe our belongings at we dove in.  Initially the water was clowdy, but the fish were plentiful.  Once we swam out away from the beach the visibility cleared up and we were able to follow huge balls of feeding fish.  It was probably 15 minutes before Joe saw the first shark, Tim and I missed it but after swiming the lenght of the bay we were able to find two nice sized shark and swim behind them for a minute or so.  They were about 3' long and fast!  It was fun to swim with them, but it seemed to defy all logic for us to actually want to be swiming with them and intentionally follow them, not swim as fast as we could in the opposite direction!!  In all we either saw six shark, or the same two, three times.  Baracuda like this bay and we were able to spot several.  They like to sit right at the surface and are fairly indifferent to one swiming right up to them.  Most of the fish were fairly small in Shark Bay but a big parrot fish cruised by us just as we were thinking about going to go shore, we decided to follow it for a bit.  It lead us to a sea turtle!  Koh Tao means Turtle Island, but we havn't seen a turtle yet during our stay.  This one was bigger than any we have seen before, and petty docile.  We were able to swim with the turtle for about three minutes before he moved towards deeper water and we decided that two hours was enough time in the ocean for one day.

Tim: Went to a Mexican restaurant for dinner tonight. The food was ok. Both Amber and I think that they used mayonaise as a substitute for sour cream, so the taste was a little off from what we would expect from Mexican food. Many of the beach side restaurants have a movie showing on a large projector screen in the evenings. This evening the movie was Bridesmaids. We stayed until the movie was over, then went to a beach bar for a couple of beers. Tonight was New Year's Eve before the Chinese New Year, so there were a lot of Chinese people out celibrating with fireworks and chines laterns on the beach. Amber and I even set one off for good luck. Its 10:45 am, and Amber and I are still in the room after our excess sun exposure yesterday. Getting ready to explore the other side of the island on the motor bike after some breakfast. 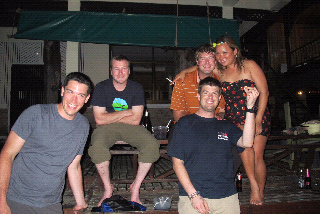 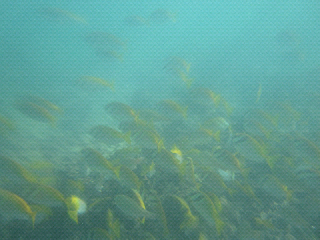 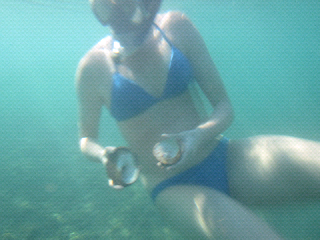 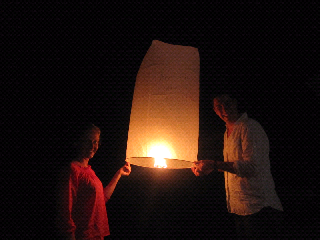 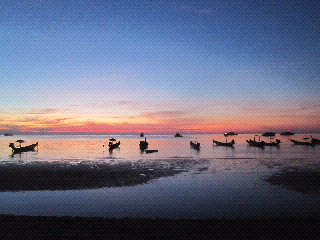 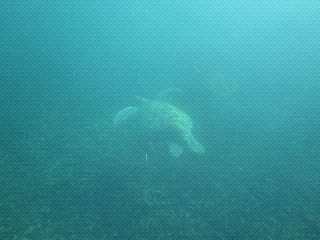