Tim: My parents gave Amber and I some Thai cell phones for use in Thailand, went snorkeling at Shark Bay and I left the cell phone in my board shorts. No more cell phone:( I also seemed to have broken my point and shoot camera as well. We tried to use the camera in a water proof camera bag under water, and this broke the zoom function. Oh well, I'll just have to get another one. As for phones, Justin set us up with a place that unlocks iphones, so both Amber and I have working iphones!
Yesterday we went snorkeling with Justin and Joe at Hin Wong Bay. We drove the motor scooters to the other side of the island. All but the main roads are pretty rough. I'm heavy enough that when Amber and I are riding on the same motor scooter we can often not make it up the steep hills so Amber has to get off and hike up the hills. We are working on getting Amber pratice riding here own motor scooter. It is only 150 baht ($.4.90) per day to rent a motor scooter here.
The snorkeling was awesome! The visibility was much better in Hin Wong Bay than it was in Shark Bay. We could see more than 30 feet in the crystal clear water. There were large boulders along the beach that we snorkeled around. It was really amazing. We also went in search of some cliffs that we could jump off of. We looked around for more than an hour without finding a very good location. We settled on rock outcropping that provided a jump off point of 15 feet. I went first. I had everyone scout out of the deapest point to jump in. I ended up being an easy jump. I went first then Justing and Joe followed. Amber on the other hand hesitated for a long long long long time! We decided Amber hesitated for about an hour in the blistering sun before she jumped. So after Amber made her first jump, we went right back up and jumped again.


Spent the evening at Fai's (our diving instructor) house up on the hill in Ko Tao. The pictures are the view from our balcony. 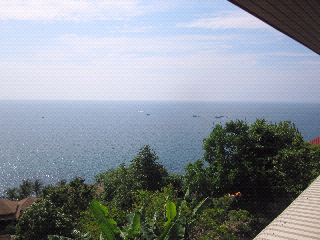 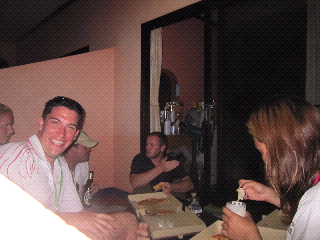 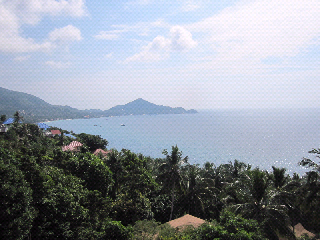