Stung by Sea Urchin: And other Misc. in Ko Samet

We had a fun second day in Ko Samet. We are still staying in the same sub par Bungalow, but preparing to move to a much cleaner place today for the same 600 Baht ($18.50 US). We rented a motor scooter for the day to tour the island. Most of the roads here are dirt and there is no motor grader around so there isn't much for filling pot holes. All of the motor scooters have knobbed dirt bike tires so that they can handle the roads. I wouldn't want to drive on the roads after it has rained.
The motor scooter ride was an adventure in itself because of the huge pot holes that made for a bumpy ride. Some of the hills are so steep that Amber had to get off and I had to push along with my legs to get up the hill. If it wasn't for the pot holes, we could have built up speed to make it up the hill, but the road conditions often made it difficult to move at more than a couple mph. The roads are also just a single lane about 12 feet wide, so when a water truck of the taxi trucks come the other way, they can barely squeeze by you.
We found a beach to go swimming. It was mostly empty except for a few other beach goers.  Spent time in the water, and a while laying in the sun. We jumped off a small pier twice then swam ashore.  I stepped on a sea urchin and got 3 barbs on the side of my left foot. Amber an I spent 30 minutes trying to dig them out with my Leatherman.
Another swimmer just up the beach from us, stepped on a sea urchin almost immediately after getting into the water. He had it much worse than I did, as he had about 10 different barbs all on the bottom of his foot.
We went to a clinic and bought some antiseptic cream for 50 baht ($1.60 US). I think we got all of the barbs out because there is no pain or redness in my foot. 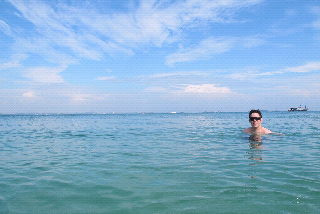 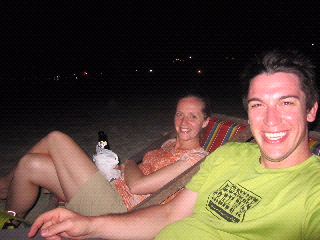 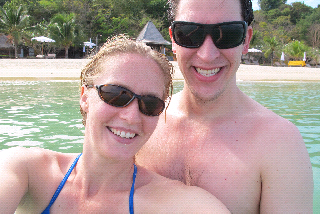 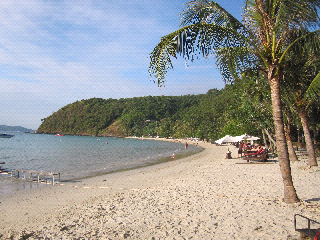 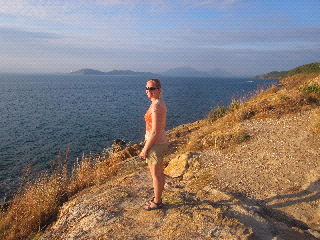