Amber:  After driving up to Boker Hill Station, we had gone to a small set of falls and had a beer while sitting in a river side hammock.  The locals were swimming in the river, but we opted to stay dry and enjoy some cheese and Ritz crackers we had purchased at a mini mart.  On our drive back to our guest house, a small cow was grazing along the road.  We're not sure what spooked it, but as we drove past it bolted out into the road, almost smashing into our motor bike.  Thankfully, Tim was driving, and we were unharmed. For dinner we returned to our little corner restaurant and had more $0.50 pints and onion rings.  While we were munching away, we heard thunder in the distance.  Feeling very experienced with rain storms, we laughed when the wind picked up and the first fat drops began to fall. It went from dusk to completely dark and sheets of water fell from the sky.  We payed our tab then sprinted to a near by travel agency to book our mini van from Kampot to Sihanoukville.  We were completely soaked from the rain by the time we were able to duck out of the travel agency and find our way back to our gust house.

The bus ride to Sihanoukville was only two hours so we arrived mid morning.  We were dropped off on a road that lead straight to the beach, perfect!  We checked a few hotels before settling on a room that was close to the ocean, but far enough away from what looked like the party strip.  Later we realized that we could have booked along the beach if we wanted... the party scene in Sihanoukville appears to be pretty quiet during the week.  The beach in Sihanoukville was not quite what we were used to in Vietnam. It was crowded and a little dirty, but it was still a long curving beach of white sand and turquoise water.  A lot of beach benches with umbrellas line the shoreline, so finding a place to sit down was easy.  Within two minutes of arriving, five different hecklers had stopped by to peddle sunglasses, fruit, massages, leg waxing, pedicures and a tour to a near by island.  A lady even told me my legs were very hairy.  The nerve!  I felt better about it when our friend Joe later told me that they had wanted to wax his back.  We opted for a more rocky, secluded stretch of the beach when we returned.

Torn between enjoying more beach time and actually being adventurous, we finally decided to rent a motor scooter so that we could go check out the Cambodian brewery.  Owned by the government, Canbrew bottles all of Cambodia's beer, and offered tours every Wednesday, for free!  On our way there, we were pulled over by an officer.  He asked Tim for his licence.  Tim, obviously not having one, asked how much the fine was.  The officer thought for a moment then told us it would be $10.00.  I would have happily given the man $20.00 but Tim was confident enough to tell the officer that we only had a five.  The man was more than happy with the money and even told us to tell the next officer that we had already paid if we got pulled over again.

Tim:  The Canbrew Brewery was closed for tours, so we headed back to the main part of town. We set up a dive for the next morning to the nearby Koh Rong Island. We found dinner a small restaurant called Nice Food. A number of the restaurants advertised have burgers for sale, but this place advertised beef burgers for $1.00. It ended up being $1.50 with cheese. Nice Food had the best burgers we have had in Asia for by far the cheapest price. The freshly made bun helped make it a delicious burger. Over the three days we were in Sihanoukville we ate there four times and I had three cheese burgers.

One evening after dinner Amber and I found an Absinthe bar and had two shots of homemade absinthe. You took it as a shot then ate a frozen grape afterward to wash it down. I hadn't had it this way before.

Amber:  Waking up the next morning for our trip to Koh Rong was rough.  At first I thought it may have been the Absinthe we had enjoyed the night before, but then I realized it was our dear friend travelers tummy rearing its angry head.  Again.  Being as we were going to be on a boat all day, scuba diving, I was not happy.  We got packed and ready to go, regardless.  We had signed up for one dive, and then were free to snorkel around the island, breakfast and lunch included as well as the boat to and from Koh Rong.  All for thirty dollars.  What a steal!  We later learned that sometimes, you get what you pay for, and the cheapest option isn't always the best.

It was pouring out when we stepped out of our guest house.  The streets were flooded, and made for a wet walk up to our dive center.  The weather seemed to have set the dive company a bit behind schedule.  We finally got into a very cramped tuk tuk and were shuttled across town to a harbor and onto a tiny old wooden boat.  At first I thought it was a shuttle to the real boat!  It was nothing like Tim's and my first dive organization; Bans on Koh Tao.  There, everything was in order and in good condition.  Organized.  Our dive company in Cambodia was... lacking.

It took us two hours and forty five minutes to travel to Koh Rong Island.  We guessed we were going 6 knots or less. It was painful to see how slowly we moved away from the harbor and towards the island.  I kept waiting for us to get up on step!  The bench seats were hard, and the head consisted of a squatter behind a rickety door.  Not fun when you have travelers tummy on a rocky, slow boat.  We finally made it to the island and got geared up.  Some of the people that we rode out with were not diving, they were just going to spend a few days on the isolated beaches.  The way I was feeling, I was a little envious.

Once we got into the water I forgot about my travelers tummy for a bit.  While we didn't see the rays or eels we had seen on Koh Tao, it was still beautiful to be under water again.  We were in a very shallow sight, only going 12m at the deepest.  It was our first fun dive, so we didn't have to learn anything!  Just swim around under water and explore.  The coral was beautiful, and there were lots of little fish.  We were under for almost an hour.

After the first dive, we returned to the island and had lunch.  I learned that the toilet went from the dock directly into the ocean below. As in, free fell. Nice. People were learning how to scuba dive not fifteen yards from where one flushed.  I decided to forgo the next part of the days snorkel adventure and lay on the beautiful, white sand beach.  Tim, though feeling a bit off as well, went out for a second dive.  I walked down the beach, away from the 'contaminated' dock area, and found a perfect, secluded spot.  I was much happier laying on my beach towel on a pretty much completely isolated beach watching while Tim's boat traveled to a near by island for their next dive.  It was heaven laying on the beach, little bugs occasionally being a bother, but other wise, perfect.  I was so relaxed I didn't even take a single picture.  It wasn't until I was back on the boat for the two hour and forty five minute ride back to Sihanoukville that I realized I was covered in bug bites.  Big, red angry welts ran up and down my legs.  I counted twenty one on just one leg! 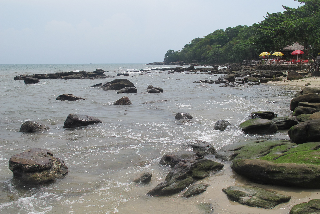 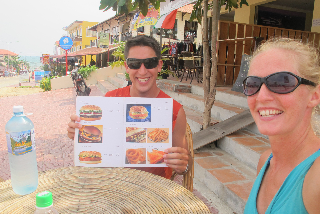 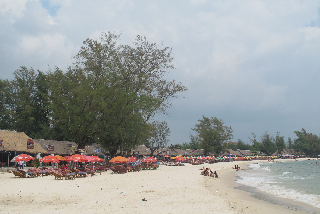 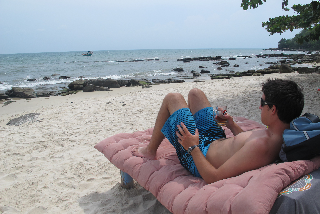 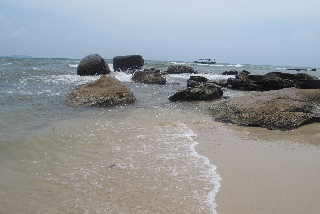 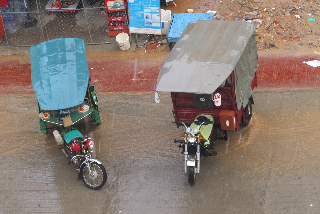 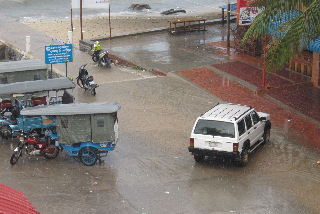 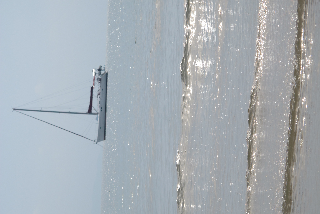