Siem Reap and the Temples of Angkor

Tim:  We took a night bus from Sihanoukville. We arrived in Siem Reap around 9:00 am. We found a guest house for $9.00 per night with a fan only. We had no plans for our first day in Siem Reap. Our plan was to do two days of temple touring beginning the next day. This was my second visit to the Temples of Angkor and Amber's first. We bought a guide book to help us better understand the history behind some Most of them were built. Most of the temples where built between 900 and 1150 AD. Angkor Wat is considered the largest religious structure in the world. Angkor Wat is surrounded by a moat and a wall that stretches almost a kilometer on each side. At one time a city was located within its walls. Different Kings built their own cities with religious structures in the center. Angkor Thom is another such city with the Bayon at its center. Overall there has to be close to 100 temples and religious sites in the general area.

Amber: The Temples of Angkor were something I had wanted to see this whole trip!  Tim had gone with our friend Eric a couple years ago and the photos they had brought back were amazing.  We left Sihanoukville by night bus.  It was not the most glamorous of buses.  We had envisioned big comfy seats that reclined side by side, allowing us to watch movies all night.  The bus we had booked, budget, of course, was more like tiny stalls stacked on top of each other.  Tim and I were on the floor with other foreigners stacked on top of us.  I was in the middle isle and barely fit into the bunk.  I felt bad for Tim.  He didn't fit.

We stopped in the middle of the night for a restroom break.  The 'bus stop' was actually a patch of grass on the side of the road.  Being the only girl in the stop that needed to use the facilities, I braved going off in the dark.  Once boarding the bus again, I stowed my flip flops under my bunk.  Tim and I both looked at each other as there soon was a strong smell of poop.  We both checked our shoes and I was horrified to find human feces caked onto both of my flip flops.  So gross!  I had tracked it into the bus.  I took my flip flops back outside and scraped the mess off of their bottoms and as the driver was honking at me to hurry up, left them in the door way.  I spent the rest of the night feeling bad for the driver and catching wiffs of poop.

When we got into Siem Reap we were met by a tuk tuk driver that was to take us to our guest house.  The bus was literally gated off from hecklers and tuk tuk drivers trying to get in to sell us goods and offer rides into town or the temples.  It was like a scene out of a zombie movie; their arms and bodies were reaching through a chained off gate as they yelled at us.  Someone had rifled through Tim's and my bags during the night.  The top zipper of my bag was jammed shut and he had a bag half way pulled out of his.  Thankfully, nothing of value was taken.  I felt less guilty about my poop shoes.

Once settled into the room for the day, we showered and took a much needed nap.  We watched a movie and had some dinner, a few Angkor beers and went to bed early as we had booked a 8:00am pick up for the temples the next morning.

We started at Angkor Wat.  It was beautiful!  So much detail went into the walls that you didn't really even notice the amazing structure they were etched into!  We spent over two hours walking around, looking at the stories that were carved into the walls, climbing around on the walls (it's amazing how unrestricted it is, you can go any where!), and reading the book Tim had bought on all the temples of Angkor.  It really helped know what we were looking at, appreciate how old the structures were, and know what significance it had.  We had a bunch of temples to look at, and after Angkor we were already behind schedule.

The next temple we went to see was the Bayon. It was beautiful in its self, but the highlight were the huge faces were carved into the towers.  It was amazing!  Pictures can not do any of the temples justice, especially this one.  It's incredible.  We explored this one for over an hour as well, me snapping pictures while Tim read out loud to me from the book.  Unfortunately, we have since sold the book, and I was only half listening to the details Tim was telling me. So he will have to fill in on the dates for the temples.

Overall, we toured for nine hours the first day, and I took about 200 pictures.  The second day we were out about six hours and I took over a hundred more.  When can you ever take enough pictures?  We had a great time. Each temple was full of tourists, but it was a sight worth being in a crowd for  Each temple was so unique, it was hard to pick a favorite.  Each one was beautiful.  I loved the trees growing on Thom Prom, and I think the Bayon was Tim's favorite, but it's hard to say one was better, more impressive, or more beautiful than the other.  Alone, each is amazing, but the fact that there are so many and so different, make it an experience of a lifetime.

Amber:  Our last night in Seim Reap we went out and found dollar tacos and dollar fifty margaritas that put the Bears Tooth's margaritas back in Anchorage to shame.  After having two margaritas each, we decided it was time for me to have my first fish spa experience.  We found a spa for a dollar for 20 minutes, beer included.  What a steel!  It was an adjustment, but the fish did a nice job nibbling the dead skin off our feet.  We've had better pedicures while in SE Asia, but not for a buck and with a beer! 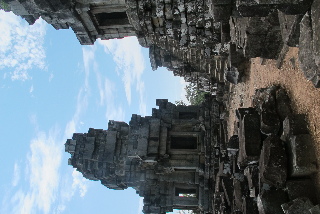 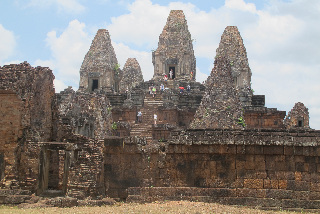 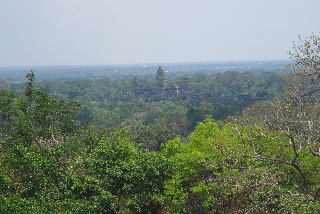 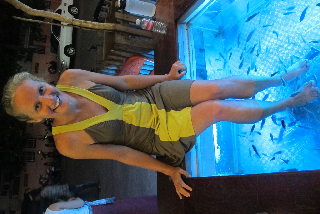 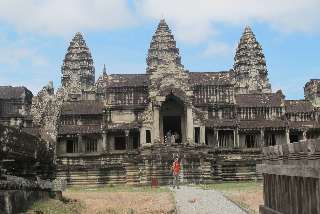 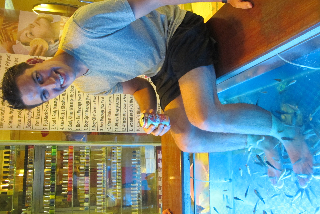 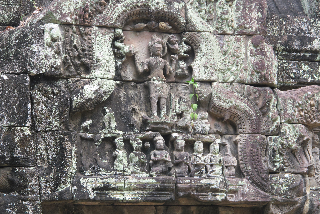 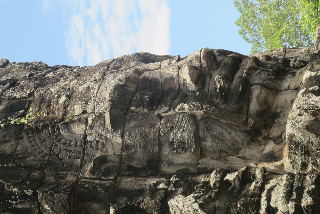 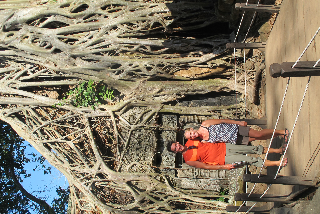 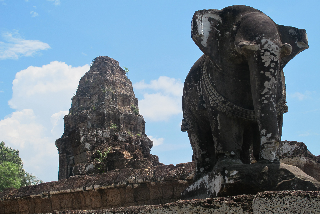 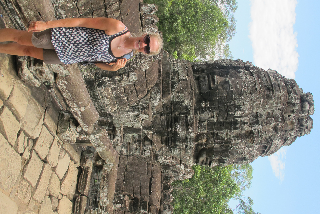 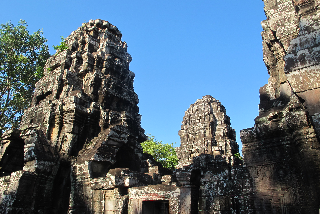