Amber:  We arrived at our budget hotel in Athens and while Heather and I checked us into our rooms, Tim parked the car and literally watched someone sitting on the street corner, shooting up with heroin.  We laughed about it, determined to see the historical sights Athens had to offer.  As we walked down the main road towards the city center, we stumbled across another group of junkies, sitting in plain view and using syringes on the street corner. We also found a collection of prostitutes, and an abundance of homeless people, all scattered along the alley ways framing the main road. 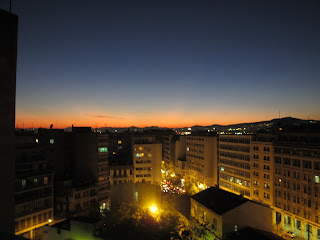 The Acropolis and the Parthenon closed about at the time we arrived, so we just soaked up the sunset over Athens.  The sunset was beautiful, and sitting on a hill made of marble was fun.  It was cool, slippery in flip-flops and very smooth to the touch.  We went down to the 'tourist' quarter and ordered a bottle of wine, watching a very quiet plaza.  It wasn't long before a group of young children came up, asking us for money. We said no, and they went a ways off, and another group of slightly older children walked by and threw shreds of plastic at us while we sat. Not the best first impression we've had on a city, so its a good thing that it had such cool history to offer us in the morning! 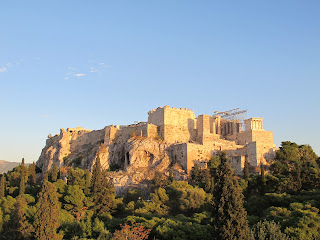 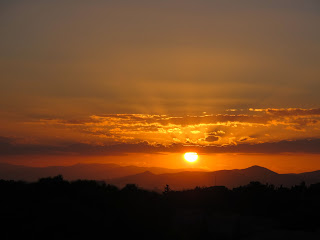 The next morning we were able to make our way back to the Acropolis and view the Parthenon.  The sun had come out, and it was a beautiful, hot day.  We got into the very long line to get tickets, and finally made our way to the stair way leading up into the Acropolis.  The stairs were crowded with a tour finding a bit of shade on the steps.  We had a laugh about an old dog that had found a spot right in the middle of the action, and was sprawled out on the cool marble steps, completely at home in the chaos and sound asleep.  No big deal that the marble steps he was sleeping on were from about 450 BC. 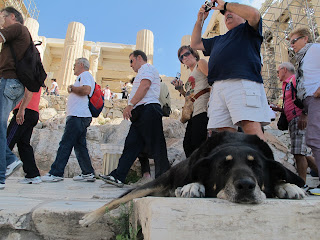 The Parthenon, the Acropolis and the city of Athens is dedicated to the maiden goddess Athena.  The myth has it that there was a competition between Athena and Poesidon as to who the city should be named after.  Athena provided an olive tree, the first in Greece.  It symbolized peace and prosperity.  Poesidon offered a horse, representing war and conquering.  Others say he thrust his trident into the soil and a large spring of salt water spewed forth, symbolizing war and the sea.  Either way, Poesidon lost, and Athens had been named in honer of their patron Athena ever since. 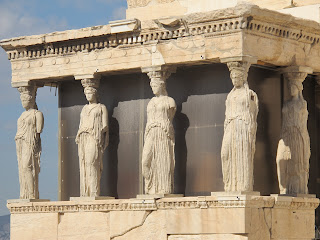 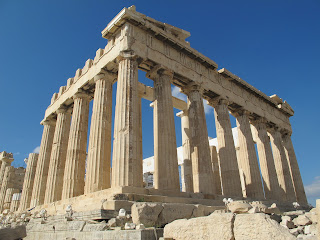 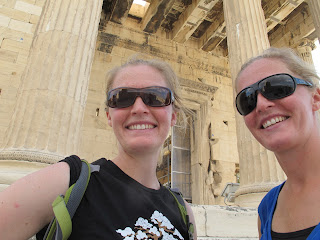 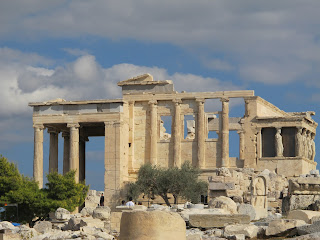 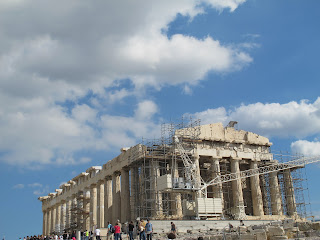 Tim:  After two days in Athens, we were up for a beach day. We drove an hour and a half southeast of Athens to the Temple of Poseidon which is located on the coast on a small point near the most southern tip of the peninsula. Afterwards, we found a decent stretch of beach to relax for the afternoon and do some swimming. 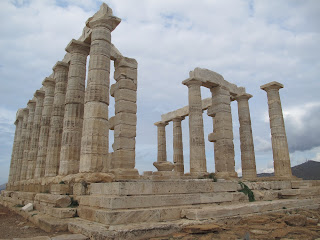 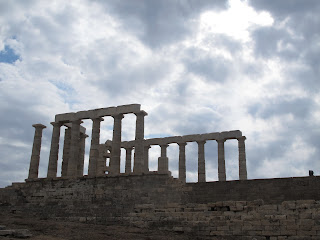 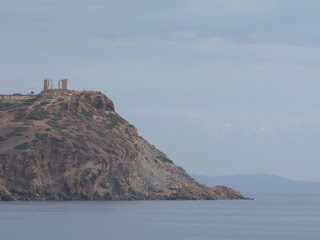