Amber:  After taking five hours to climb the mountain behind Nong Khiaw, we realized just how far we'd come from being Lost Lake running shape.  A long, long ways!  Beerlaos are more than likely to blame, but excersise definately needs to be reintroduced to our lifestyle, vacation or not!  The next morning we rented some mountain bikes and headed north to look at some caves in the area.  Tham Pha Thok is a cave that the locals and their government hid in while Laos was getting heavily bombed by Americans during the second Indochina war.  Kind of sad.  The local kids were all out of school so met us at the bridge leading up to the cave.   We tried to tell them no money, but they didn't understand.  One little girl even went so far as to take my hand and guide me through the large rooms.  There were big signs in English pointing out where different structurs had been, or people dwelled, so their presence was cute but unnecessary and they all wanted money!  After looking at the cave for a bit, we desended down the stairs and headed around the mountain in search of a different one.  We came across an older Laos and he also wanted to guide us.  Tim was able to tell him 'No Kipp" and he as well as the smallest children disperssed.  Two of the older boys (about twelve) staied and we finally negotiated that we'd give them 15,000 kip for their servies.  They took us up a winding path to a very narrow opening in the limstone wall.  The Laos bank used to be hidden in its narrow passages.  Now it has been washed out by flooding, so the floor was very uneven and the walls extremely narrow.  Tim tried to squeeze into where the main vault was and his shoulders were too wide to fit through!  Tim found a large moth hidding on the wall and our Laos guides later pointed out a small bat.  Tim was convinced it was dead and dried to its upsidedown perch but I think it was just reluctant to fly away from its hidding place.  Either way, I got some cool pictures!
Tim: We rented Trek mountain bikes for 30,000 kip each ($3.75) and headed off for the caves. Fifteen minutes into our ride Joe shifted gears and with a big glang ripped the derailer off of his bike. A piece of the derailer actually sheared off. Joe had to push his bike the rest of the way to the cave push the bike the 2 km back to the room. He was able to return it without any problems.
Later in the afternoon, Joe and I took the remaining two mountain bikes out to view another cave. This cave was further out and required a more strenous bike ride and a steap hike through the jungle. It was an interesting cave. Military personnel hid in this cave during the Vietnam war to avoid being bombed by US airstrikes.
After we got back from the caves, the three of us rented an intertube and walked up the river a little ways before floating down stream and then relaxing on a beach like island in the middle of the river. Turned out to be a very relaxing day 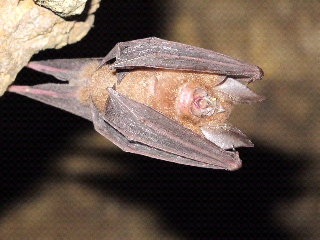 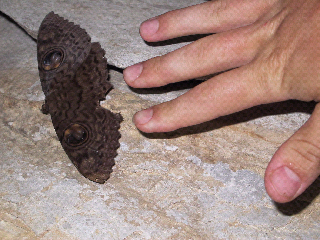 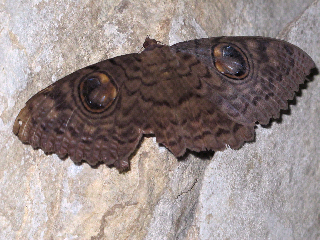 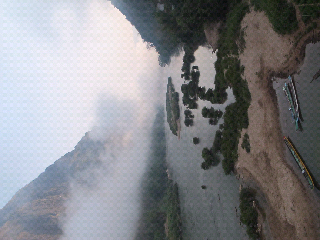 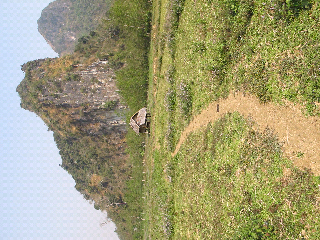 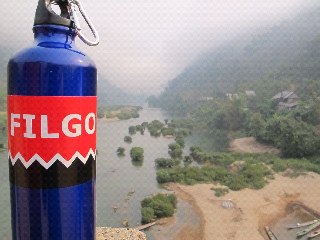 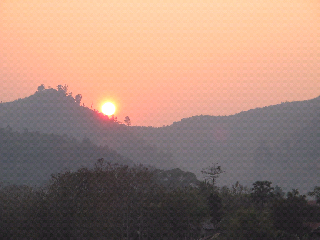 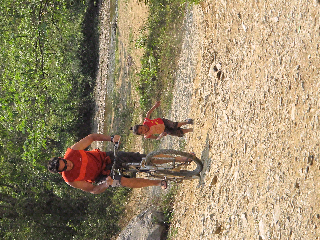 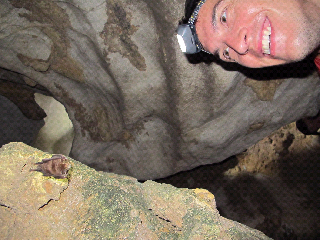 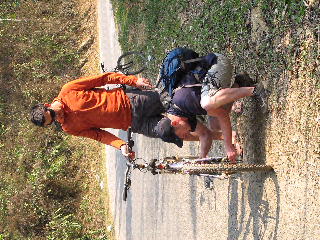 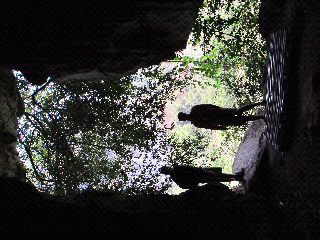 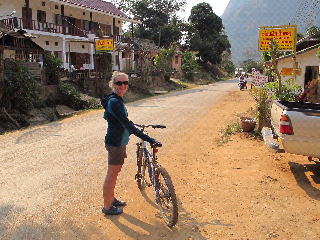 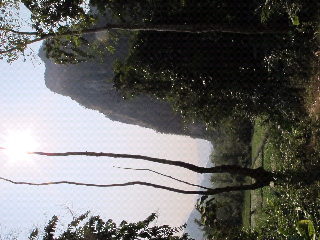