Tim: We arrived in Hoi An last night. We were exhausted even though it was a fun day of traveling. We went to a restaurant for dinner that has food that was not very tasty, but they had draft beer for 3000 dong a glass. I had to pull out my phone calculator to figure how much this was in US dollars. The cost for one glass of beer came out to $0.14 each. By far the cheapest beer I have ever had in my life and probably the cheapest we will ever have. People better get over here. You can get seven beers for a $1!

We changed hotels this morning. Our hotel last night was ok, but it was a little far out of town and the internet did not work in our room. Our new room isn't much better, but it costs $3 less a night and is a little quieter. After an awesome cup of iced coffee we went to the resaurant next door that served only one dish. It was a Vietnam version of steak, sausage, and eggs with a bagette all for $1.50 each.

After breakfast we headed for the less touristy beach 4 km out of Hoi An. We are at the beach now. There are beach chairs and umbrellas that are free as long as you eat food in their beach side restaurant. It is about 80 degrees and there are 3 foot waves breaking on the beach. It's been two weeks since we have had good sunshine so Amber got sunburn in an hour and a half.

Sitting here on the beach we have decided to stay another day here. We will probably do the same thing we did today, relax on the beach!

Amber:  Finally, after being in Vietnam for two weeks, we are again sitting on a beach getting some color.  Vitamin D has been missed during our first rainy, cold weeks!  Today has been so nice to just sit on a little beach chair, relax in the sun and listen to the ocean.  This is why we are in South East Asia!

We were able to watch Vietnamese fisherman return from their morning catch in high swell.  Their vessel of choice resembled a large woven basket.  Literally, they were 8' in diameter and round, woven boats.  They bobbed along, oaring themselves towards shore.  They had to have been fishing with their nets at lesat two miles off shore, powered by only one wooden oar.  I walked down the beach in my bikini and watched them land.  It was a crazy process of timing the waves just right, jumping out at the last moment, and hauling the boats out of the surf.  This obviously wasn't their first rodeo and all four made it onto the beach without spilling the contents of their round crafts back into the sea.

After watching the fishermen master the waves, Tim, Joe and I tried our luck at body surfing.  We did it so poorly that an Austrialian couple later came over to tease us.  They applauded us for our efforts and laughed when they found out we were from Alaska! 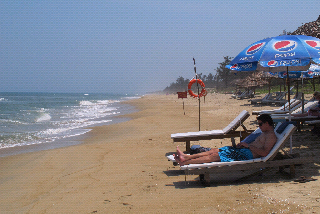 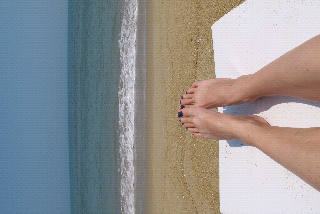 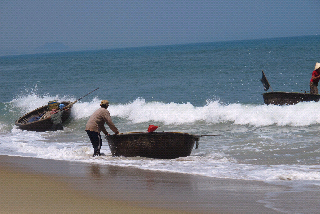 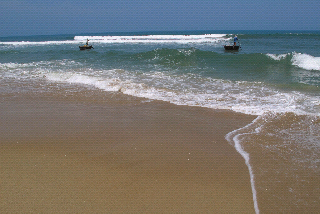 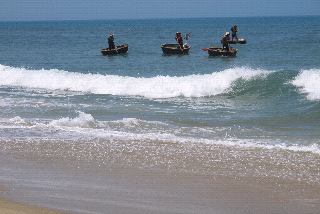 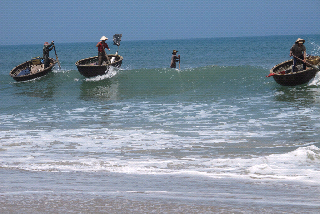