Crazy Motorbike Ride out of Hanoi

Tim:  Friday morning we took a taxi over to Vietmotors where we had bought motorbikes. It took some time get everything ready to go. Last minute repairs, installing luggage racks, mirrors, etc. We finally left the shop at around 1 oclock. We made it about one kilometer from the shop when Amber's motorbike stalled out at an intersection and died. Joe and I had already gone through the intersection before we saw that Amber was not behind us. At first we thought she had frozen with fear at the intersection and wouldn't drive through, but after a minute or two we realized that there was something else going on.

We doubled back to find Amber's motorscooter not running and Amber trying to get the scooter started again. The locals helped identify for us that the motorbike was out of gasoline. We had just passed a gas station, but it was behind us on a one way street. A local offered to get petrol for us in a water bottle and bring it back. After a ten minute wait we were back in business with Amber's motorbike running fine. Five more minutes down the road we all stopped to figure out our route out of town. We began to pull back out into traffic when my motorbike stalled out. It was out of gas too! Once again a local offered to go get some petrol in a water bottle for us and bring it back. In the process Joe had gotten separated from us. After another 20 minutes I had gotten gas and we found Joe again. The traffic was crazy, so many motor scooters. The traffic continued for so long we didn't even realize when we were finally out of the city.

About two hours into our ride. We came up a train that was stopped in the middle of a smaller town. The train tracks ran with in 4 meters of the road. People were running towards the back of the train, and traffic was backed up on the main road. Beside the tracks was a severly mangled motorbike with a group of people standing around it. Then a few feet later we saw a piece of cardboard mostly covering a dead body with only the feet sticking out. We could see that all of the toes on one foot had been torn off. Amber saw a policeman trying to vomit beside the road. It appeared that the motorbike and driver had been struck by the train. The sight shook us up a little bit, but we kept our focus on the road.

Another hour of driving and we reached Ninh Binh. The city has little in the way of tourism, but we easily found a hotel. It had begun raining during the last two hours of our ride. Amber has full rain gear, but I only have a rain coat as I sent the pants back home to help lighten the load of our backpacks. Joe and I bought rain ponchos that were for sale on the side of the road for $3.40 each (70,000 dong).

After getting settled in to our hotel for the night, we went out for dinner, The Lonely Planet guidebook recommended a restaurant serving goat meet, so we went there and had goat. It was served grilled and eaten rapped in rice paper with an unknown leaf and mint then dipped in a spicy chili sauce. The goat was good, the corn soup we had as an appitiezer wasn't so great.

We were happy to be safe. 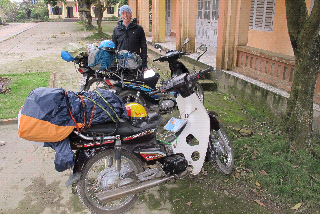 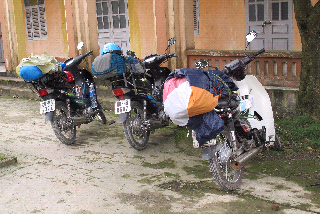