Tim: We are back in Hanoi after a two day one night tour of Halong Bay. This included the 3 1/2 bus ride out to Halong Bay with an overnight stay on the Imperial Junk (our boat) with a tour around the bay. We picked the budget option for the tour. It cost us $45 each. There were more expensive options but the only difference appeared to be a slighltly nicer boat and better food.  The bus ride to Halong Bay went without issue. We were in a newer Hyundai 25 passenger bus. Almost without exception any bus in Southeast Asia will not depart unless it is completely full. Our bus was completely full, and the seats are built for people with a small stature, so I barely fit in the seats.

We only had to wait a few minutes before boarding our junk. It was definitely a little run down, but most of the other Junks appeared to be just as run down. After leaving the pier, we headed immediately for a large set of caves. Docking for the cave access was maddness! People here treat their Junk driving like they treat their motor scooter driving. We collided with several other Junks. There were so many boats trying to load and unload people at once with limited space. It was complete chaos! Most of the Junks had many battle scars demonstrating there previous run-ins with the competition.

The caves we visited were actually really amazing even if we did have to wait in a line to get in. It was the largest cave that I had ever been in with the roof of the cave more than 70 meters high. The limestone cave had been there for a long time as the stalactites were huge.

Amber:  Halong Bay was beautiful.  Tim, Joe and I decided to go on the budget tour that involved kayaking, a tour of a cave and spending the night on a junk.  Sunshine permitting, swimming was an option with us returning to Hanoi the next day after visiting a fishing village.  After spending way too much time on a bus then going into the hustle and bustle of Hanoi, I was excited to go get some ocean time in.  We arrived and pulled away from the harbor on our junk to be served a family style lunch.  Food was included, all beverages, including water, were not.  We were not aware that the water was not availible so hadn't purchased a supply while on land, so were forced to buy mini bottles of water once on board at a considerably inflated price.

We crossed the bay and began to wind our way through the islands.  We entered a bay filled with boats and our captain literally began to ram his way into the harbor.  It was not safe to sit on the upper deck incase we hit another junk, so we were asked to go down to a lower level.  It wasn't long before our guide did his best to tell us we were to go to shore and view a cave.  His English was not much better than our Vietnamese!  Thankfully, pointing gets the idea across, and we followed the rest of the travelers on our boat up the bank to view an absolutely beautiful, huge cave.  Its stlagtights and stlagmights were amazing, all highlighted with different colored lights.  Very... festive!  The trail through the cave wound along, giving many beautiful angles of the cave.  There was even natural sunlight streamilng through in one location, the natural light was beautiful on the caves almost jellyfish like stlagtights.  The second cave we viewed was not as detailed with the mights, but was huge and had an amazing horizontal beam of natural light that cut through it.

Once done viewing the cave we boarded our junk and after more bumper junks leaving the harbor, continued on for the much anticipated kayaking.  It was during the streatch between the caves and the kayaks that Joe, Tim and I all decided that swimming may not be high on our to-do list as there was so much oil scum and garbage floating in the water.  We arrived at the kayaking location to have several other junks already moored and the kayaks taken out.  It was at a floating fish farm, so we were able to walk around a bit and look at all the pens of fish, octopus, clams, and scuttle fish.

Kayaking was nice, but we noticed more garbage and possibly human feces in the water.  After witnessing a fight break out between two kayakers and a local in a heavy, motor powered wooden skiff, we were hesitant to go too far.  It appeared that the two travelers had paddled through a small cave that went through a rock in the middle of the bay and the local wanted payment.  Having no signs and not been informed before they went through, they refused, so he threw a full can of what sounded like soda at one of their heads then proceeded to try and run them over in his skiff.  He then chaced them back to the junk and literally ramed them as they jumped out of their kayak.  He then stood there looking menacing while our guides did nothing.  Scary!

Halong Bay has only a few places you are allowed to moore up so we docked up with the 'delux' partner of our junk and had dinner and plaied some Up and Down the River with some new friends, Jack and Inga from Holland.  Joe won the game for the one hundredth time so I went to take a shower and catch some sleep.  After showering and being happy for hot water and clean, fresh towels, I was too tired to go back upstairs and complain to Tim and then the boat's crew that my sheets seemed to have maybe been negletet to have been changed from the previous occupant.  Or two.  So, sweet dreams for me!

We woke up bright and early for breakfast.  The only thing on the agenda was a quick stop at the "fish market" then back to Hanoi.  The fish market was actually just more floating fish farms similiar to the one we had taken the kayaks out from, and as a group, all the travelers on our junk declined paying the suprise 100,000d ($5) per person to go get rowed through a cave.  So off to Hanoi we went, but not until Tim was able to go to the Halong Bay casino and play some Black Jack. 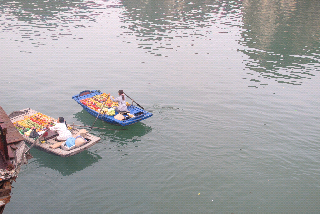 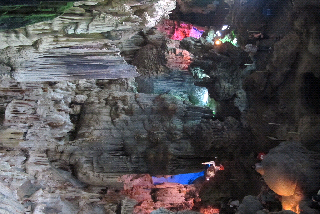 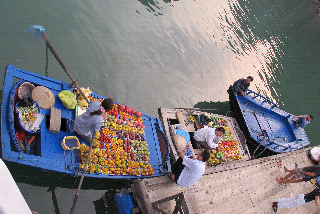 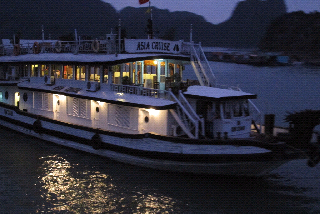 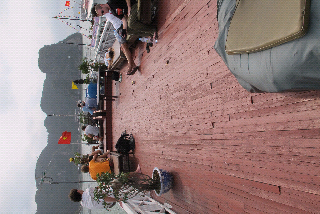 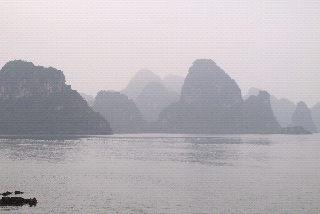 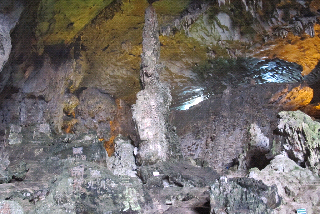 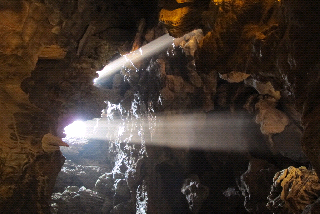 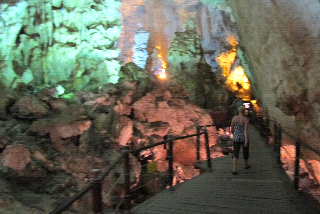 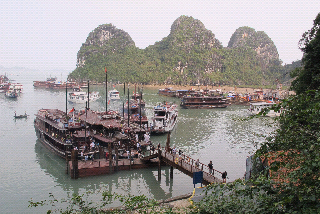 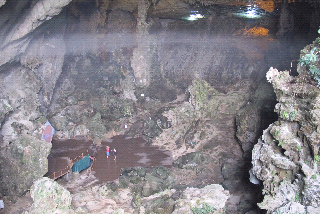 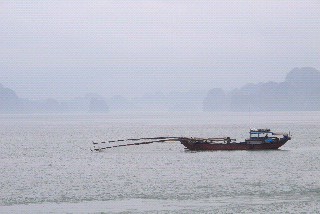 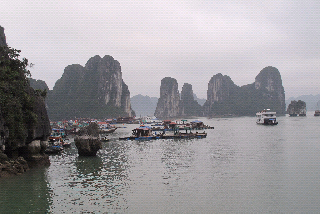 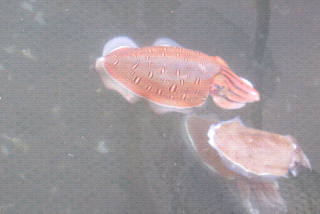 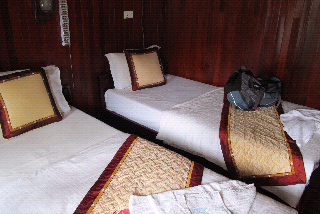