On the Road Again

Tim:  After leaving Hoi An, we continued to head south with Nha Trang as the destination we were looking toward. We knew this ride would take us at least two travel days so we expect to stay somewhere along the way for the night. We went in search of ancient Cham ruins on the way. Our first attempt got us no where. Turns out we were at the wrong site, and there did not appear to be a trail up to the hill top where the Cham tower stood. After plowing our way along a narrow dirt trail on our motor bikes we tried hiking up the hill but were unable to due to the dense jungle brush blocking our way. We got within 100 yards of the tower before finally turning back. The temperature was over 90 degrees so we were drenched in sweat by the time we returned to the bikes. We were all a little frustrated by the lack of progress, but 15 kilometers down the highway we saw the ruins we were attemptimg to find originally. There were no other tourists, and we were able to ride our motorbikes right up to the ruins. These Cham toweres were built around 900 A.D. There were obvious signs of refurbishing, but it was still and amazing sight.

After a fourty five minute stop there we continued on. We were behind schedule after our detour, and it was getting dark. We had ridden our motorbikes one other time in the dark on the highway and it wasn't fun. The headlights on the motorbikes do not work very well and only illuminate about 15 feet infront of you. The bugs also come out at night and you can no longer where your sun glasses so you tend to get a lot of bugs in your eyes. After 30 mintes of night driving we had had enough. We found a small hotel for $8.00 a night and held up for the evening. We had dinner at a small local restaurant where they served only one dish that included beef scewers, miniture spring rolls, and deliscious rice pancakes with shrimp. All this was dipped in a mildly spicy peanut saw. The food was great. We combined this with a beer. The whole tab was 90,000 dong or $4.50 for all three of us. So dinner was $1.50 each including a beer.

The next morning we were on the road by 9:30. We grabbed a cup of excellent Vietnamise iced coffee and a quick sandwhich. The drive was beautiful as we were right on the coast. I ran out of gas again. I've actually lost track of how many times I've run out of gas. I think this was the 6th time. None of our gas gages work and my bike has been gettng worse fuel economy recently. Our bikes are getting arond 75 miles to the gallon. Not bad.

We stopped at a small beachside village for lunch the only thing on the menu was steamed rice served with shrimp. The food was simple but deliscious. An old man who spoke some english sat next to us and told us about being a scout for the South Vietnam Army during the American war. He told us about his 10 children and 21 grandchildren. After a filling lunch we were back on the road. One and a half more hours and we had reached Nha Trang. The sun was blistering hot. I was forced to wear pants, shoes, and a long sleave shirt to avoid being fried by the sun. Right before we reached Nha Trang we found a drink stand selling cold drinks. In a matter of minutes Amber, Joe, and I downed 5 different soft drinks of iced tea and soda pop.

There are may hotels lining the beach here. We found a budget hotel one block from the beach for $8.00 per night.

Amber:  We left Hoi An and went in search of Son My, a South Vietnamese "American War" memorial.  While Americans record 369 deaths, the Vietnamese Memorial recorded 504 civilians that were massicered.  Most were women and children.  It was chilling to look at the pictures of the elderly, women and babys that had been herded into a ditch then killed, exicution style.  Others as they fled down the street. We were walking into the memorial and encountered school children leaving.  The common greating of "where you from" from one of the children caused him to actually take a step back when we responded "America".  The rest of the memorial included foundations of the homes that had been burned to the ground, bomb shelters that had been destroyed, and really, really tacky dead animal statues.

We drove a long ways after Son My.  It was a beautiful road, and very warm.  We wanted to reach Quy Nhon but it was getting dark.  Bugs are bad enough without it being dark out, let alone the traffic on A1.  We decided that we should pull over after who knows how many bugs died by hitting us in the face and being pushed off of the highway by busses for the hundredth time.  We discovering that our low headlighs didn't illuminate that the locals were drying straw on the road side.  Not fun!  We found a nice hotel, had some dinner and went to bed with a plan of rising early and checking out some Cham ruins.

The Cham ruins were beautiful, once we found them.  We put our bikes and our ability to back road to the test before we succeeded!  We could see a really magnificant one on the top of a hill and after asking several locals how to get to it found ourselves driving through cactus and pricker bushes on a tiny, faded path up the hillside.  The problem with asking a local how to get somewhere is you say "this way?" and point and they say "yes" and then you ask: "or is it this way?" and point the opposite direction.  The answer is again, yes!  We got so close to the origional ruin sighted before deciding that getting cut to shredds from the thorns or eaten by a huge spider wasn't worth it.  There were more on the way south, and it was 90' out.

The next sight we attempted was far more successful and we got great pictures.  It was beautiful!  What a cool way to spend the morning!  We made it to Quy Nhon in time to make it to the beach and relax.  Beach time makes everything better, and it had already been a great day.

We got up early again, and headed out to concure the 220km south to Nha Trang.  We took an amazing streatch of road that hugged the coast.  As we wound along, Tim's bike ran out of gas.  He and Joe staied behind while I took an empty water bottle down the highway, in search of the nearest town and gas station.  Happily, I didn't run out of gas and have to walk by myself to the next gas station.  There was one just over the hill.  Joe met me at the gas station and I refueled then drove back to Tim.  Once everyone had gas, we headed off.  Everyones bike worked fairly well; Tim's seemed to blow a gasket that caused it to smoke, but we made it to Nha Trang by 3:00pm.  Just in time to get a hotel for $8 a night and more beach time! 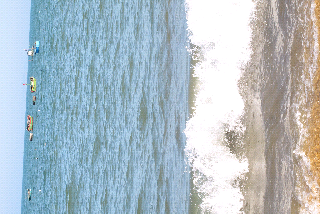 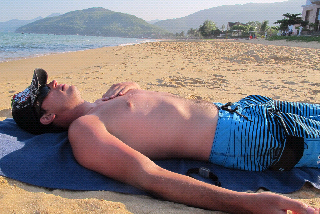 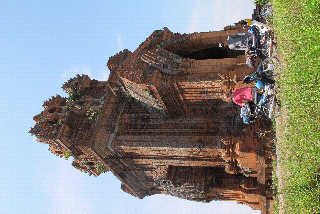 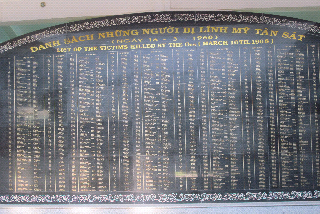 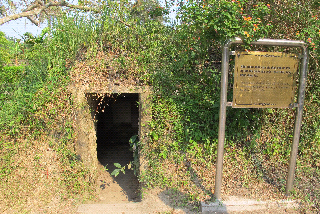 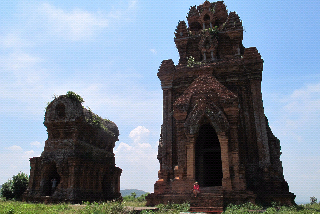 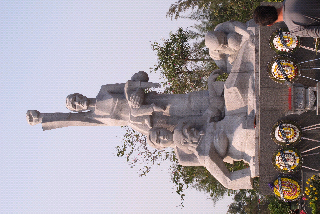 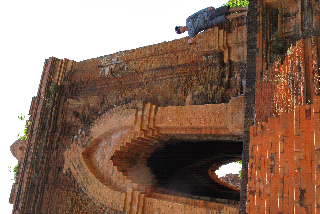 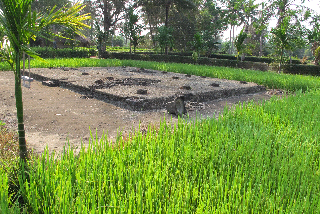 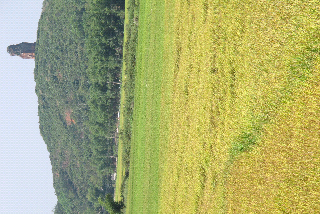